President Donald Trump told a gathering of Latin American leaders he was calling for democracy to be restored in Venezuela ‘very, very soon.’

The president spoke at length about Venezuela at a dinner he hosted in advance of his speech Tuesday to the UN General Assembly. He called for the ‘restoration’ of democracy there – but stopped short of remarks in August where he referenced a ‘military option’ for the country.

‘I ask every country represented here to be prepared to do more to address this unbelievably serious crisis,’ Trump said in remarks at the top of a dinner.

‘We call for the full restoration of democracy and political freedoms in Venezuela, and we want it to happen very, very soon,’ Trump said.

President Donald Trump speaks during a dinner with Latin American leaders at the Palace Hotel during the United Nations General Assembly, Monday, Sept. 18, 2017, in New York

Trump spoke about the human suffering under the regime of Nicola Maduro and his socialist government.

‘The democratic institutions are being destroyed. The situation is completely unacceptable,’ Trump said.

‘The people are starving and the country is collapsing. You didn’t think that was possible,’ said Trump.

‘As responsible neighbors and friends of the Venezuelan people, our goal must be to help them regain their country and restore their democracy,’ he added. 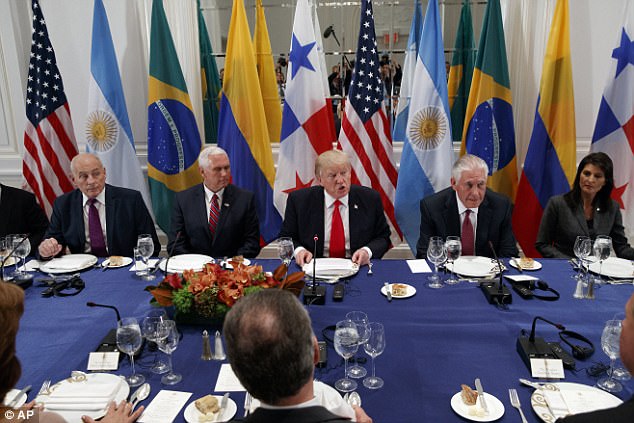 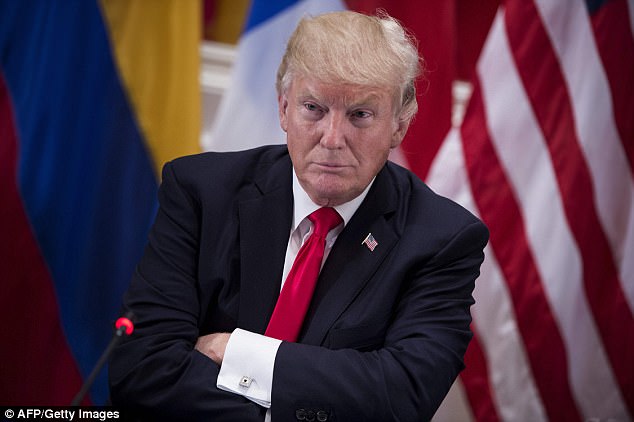 US President Donald Trump waits for a dinner with Latin American and US leaders at the Palace Hotel during the 72nd session of the United Nations General Assembly September 18, 2017 in New York City 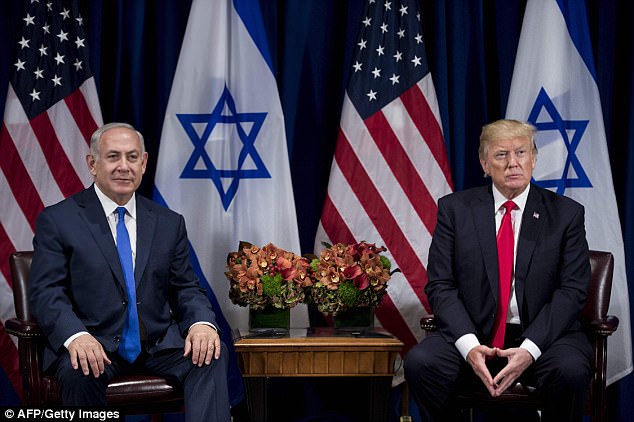 ‘We are prepared to take further action if the government of Venezuela persists on a path of imposing authoritarian rule on the Venezuelan people,’ he said.

‘The socialist dictatorship of Nicolas Maduro has inflicted terrible misery and suffering on the good people of that country,’ Trump said. Calling it a ‘corrupt regime’ that ‘destroyed a thriving nation by imposing a failed ideology that has produced poverty and despair everywhere it has been tried.’

In August, asked about Venezuela during a tense moment dealing with North Korea, Trump responded: ‘We have many options for Venezuela, including a possible military option, if necessary.’ 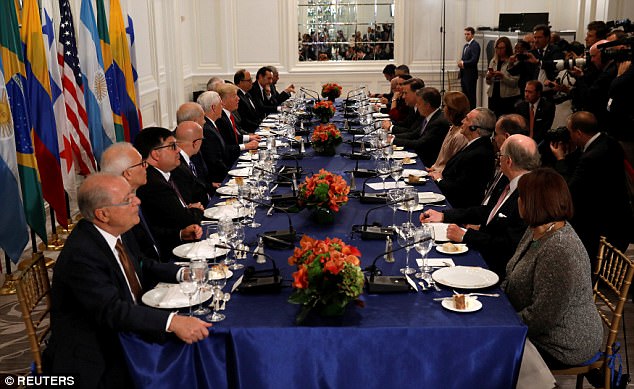 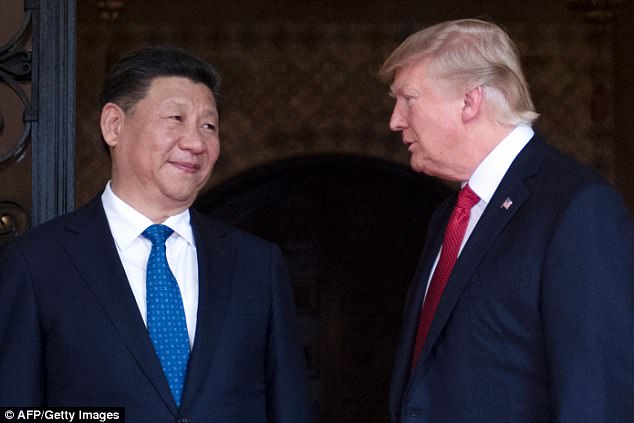 ‘It was a long call, it was a very good call. We have a very good relationship. Let’s see what happens. I think we are making great progress,’ he said, before saying he would visit China in November.

Trump and and several Latin American leaders were to discuss how to bring pressure to bear on the Venezuelan government to restore democracy in the oil-producing nation, officials said.

Trump invited Presidents Michel Temer of Brazil, Juan Manuel Santos of Colombia, Juan Carlos Varela of Panama and Argentine Vice President Gabriela Michetti to the dinner on the sidelines of the annual gathering of world leaders at the U.N. General Assembly.

Differences over ethanol trade, open-skies aviation and illegal drug production, and even North Korea, could crop up during the discussion, but the top issue will be the Venezuelan crisis, Latin American and White House officials said.

‘What we all want is for Venezuela to become a democracy again and we are exerting all the pressure we can for that to happen. Tonight we will talk to Trump about that,’ Santos said in an interview with Bloomberg News Agency.

Santos said discussion would focus on how best to pressure the Socialist government of Nicolás Maduro to allow a ‘hopefully peaceful democratic transition in Venezuela.’

At least 125 people have been killed in four months of protests against the Maduro government, which has resisted calls to bring forward the presidential election and instead set up a pro-Maduro legislative superbody called a Constituent Assembly that has overruled the country’s opposition-led Congress.

The Trump administration has imposed financial sanctions on Venezuela and Trump has called for tougher action, but Latin American leaders have stuck to diplomatic sanctions and ruled out the use of force, an option Trump has mentioned.

‘We have told Trump that military intervention is not on the agenda for any Latin American country,’ Santos told Bloomberg. ‘That would only worsen the situation.’

Last week, Trump upset Colombia, the South American nation with the closest ties to Washington, by threatening to blacklist it for failing to stop a surge in cocaine production.

Speaking at New York’s Columbia University on Monday, Santos said peace accords he reached with leftist guerrillas were allowing his government to move into areas where the drug is produced and destroy coca-leaf crops.

Trump could complain about a 20 percent tariff Brazil recently slapped on imports of ethanol over and above 600,000 liters a year, most of which come from the United States.

He could also press Brazil’s Temer to cut off ties with North Korea, since Brazil is one of the last Latin American countries that maintains an embassy in Pyongyang.