Trump calls for unity in phone call as he doubles down…

President Donald Trump urged the nation to ‘come together’ in the wake of the Florida massacre in an interview with Fox News on Saturday.

Trump spoke to Jeanine Pirro during her show ‘Justice with Judge Jeanine’ as he spoke about the FBI’s investigation into 2016 presidential election meddling by Russians, what needs to be done in terms of gun control legislation and plans related to a border wall.

In the interview, the president urged the nation to ‘come together,’ following the tragic mass shooting at the hands of a 19-year-old who admitted to killing 17 people and injuring 15 others with an AR-15 at his former high school in Parkland, Florida on February 14.

Trump told Pirro that the Democrats’ response to the memo drafted by Representative Devin Nunes, a Republican representing California and the chair of the House Intelligence Committee, actually confirmed that bias existed in the early days of the FBI’s investigation into Russian meddling int he 2016 presidential election. It had been released earlier Saturday.

But the man who wrote the response, Representative Adam Schiff, a Democrat from California and ranking member of the House Intelligence Committee, tweeted instead that his memo ‘confirms the FBI acted appropriately and that Russian agents approached two of your advisors, and informed your campaign that Russia was prepared to help you by disseminating stolen Clinton emails.’

Democrats tried to release a version of this memo much sooner, but it was blocked by Trump, who claimed he could not declassify it, as it was first written, under the advice of White House counsel. 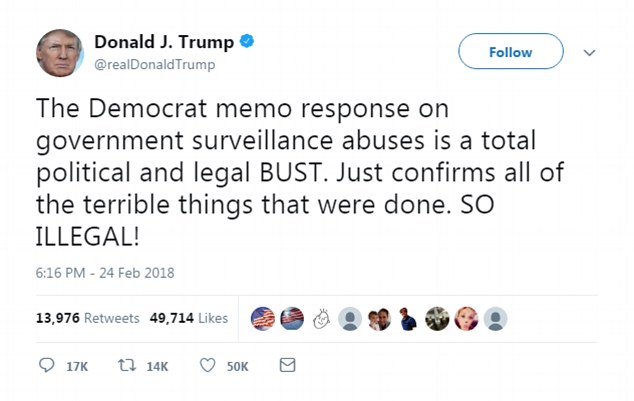 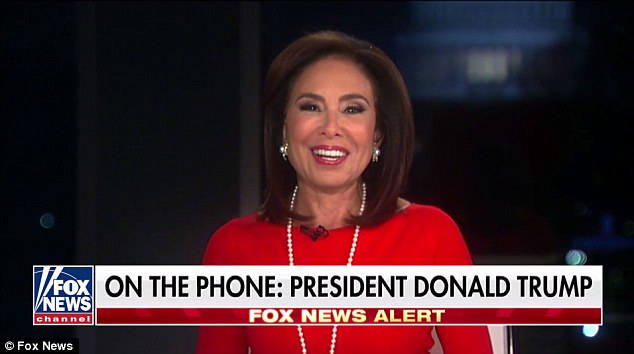 Trump gave an interview by telephone to Fox News ‘ Jeanine Pirro during her show, ‘Justice with Judge Jeanine,’ on Saturday 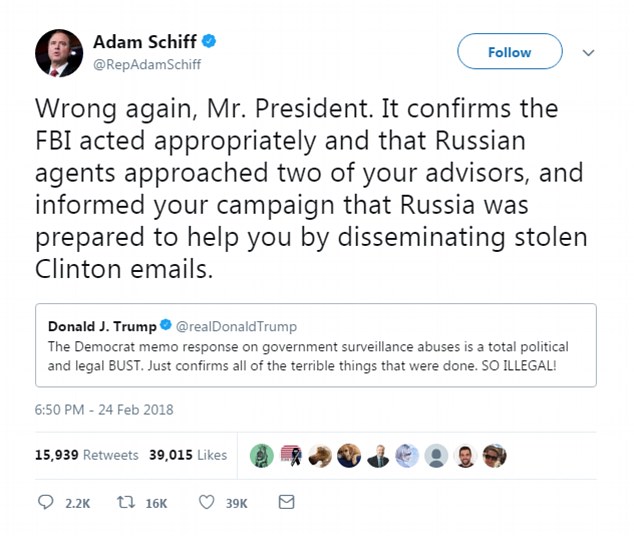 But the man who wrote the response , Representative Adam Schiff, a Democrat from California and ranking member of the House Intelligence Committee, tweeted instead that his memo ‘confirms the FBI acted appropriately and that Russian agents approached two of your advisors, and informed your campaign that Russia was prepared to help you by disseminating stolen Clinton emails’

He went on to say that Democrats got scammed by talking with people they thought were Russians, but that there was a double standard for when his campaign actually spoke to Russians, when he said it ‘had nothing to do with anything important.’

‘We have to bring the country together, Jeanine,’ Trump said.

One issue that people have a hard time agreeing on is that of gun control, which has been brought to forefront after Florida shooter Nikolas Cruz, 19, gunned down 17 and injured 15 others on Valentine’s Day at Marjory Stoneman Douglas High School in Parkland, Florida.

After this tragedy, Trump said earlier this week that the Attorney General would draft proposed legislation to ban bump stocks, which are permissible under current law and make a semi-automatic firearm function much more like am automatic weapon, such as a machine gun.

‘I’ve spoke to many senators, many congressman … and I think we’re going to have a great bill put forward very soon having to do with background checks,’ Trump added, when speaking to Pirro.

He clarified that is a ‘champion of the Second Amendment’ and protecting the rights of gun owners, and also repeated his comments that teachers should provide protection for students with ‘concealed [carry] permits.’

‘Somebody who is mentally ill should not have a weapon, should not have a gun,’ he said. ‘We’re drawing up very strong legislation right now having to do with background checks, mental illness. I think you’re going to have tremendous support.’ 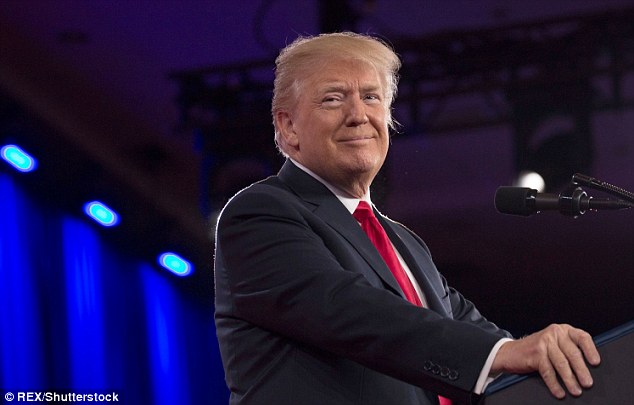 Trump speaks at the Conservative Political Action Conference (CPAC) at the Gaylord National Resort and Convention Center in National Harbor, Maryland on Friday 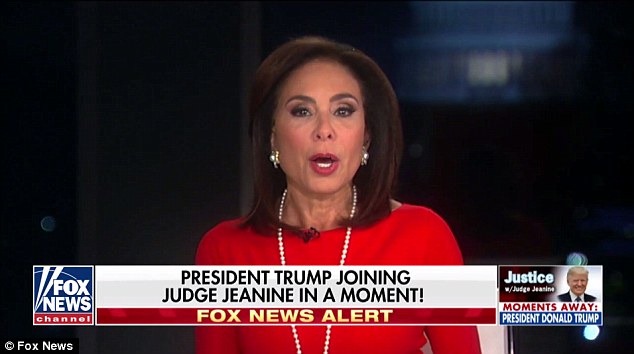 ‘We have to bring the country together, Jeanine,’ Trump said on Saturday

Switching gears, Trump spoke briefly about his plans to build a border wall.

He said that Democrats have agreed, in part, to things related to the wall, but he said ‘needs more’ when it comes to immigration control.

Referring to what Trump would like to see from Democrats on the issue of immigration, he said:  ‘We want people to come in through merit.’

This comes after the Mexican President Enrique Peña Nieto put off a scheduled trip to the US in March to meet with Trump, after a phone call on February 20 where the two got into a confrontation over who would pay for Trump’s border wall.

The Washington Post reported on Saturday that both leaders ‘called off the plan [to meet] after Trump would not agree to publicly affirm Mexico’s position that it would not fund construction of a border wall.’

Trump also reiterated to Pirro that he liked to put the United States’ military on display, for the world to see. 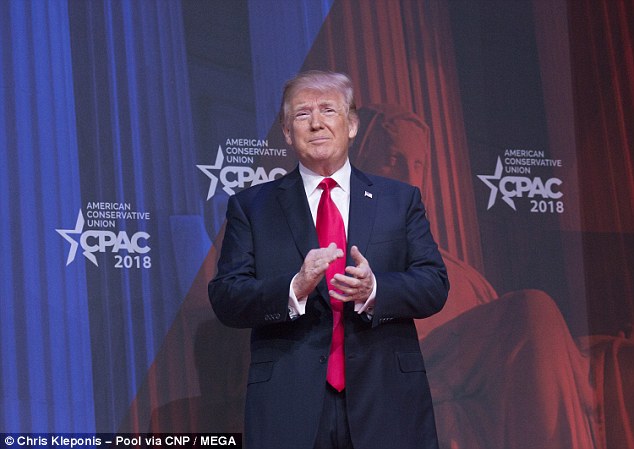