President Trump out at a Democratic member of Congress who served in the military as an ‘American fraud’ on Memorial Day.

The president on Monday endorsed Sean Parnell, a Republican who is running this November to unseat House Rep. Connor Lamb of Pennsylvania’s 17th congressional district.

‘Sean Parnell is an American Hero,’ the president tweeted on Monday.

‘Connor Lamm has proven to be an American fraud, and a puppet for Crazy Nancy Pelosi,’ the president tweeted on Monday.

‘He said he would NOT vote for her for Speaker, and did. 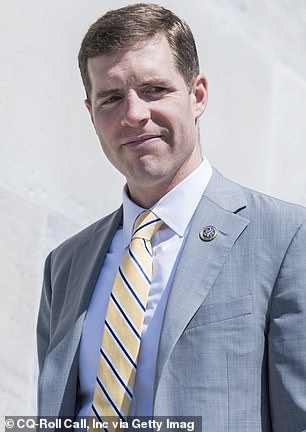 Trump falsely claimed that Lamb voted for Nancy Pelosi in the race for the House speakership. The president also mispelled Lamb’s name

‘Will kill 2A. Voted to impeach (on nothing).

‘2A’ is a reference to the Second Amendment, which gives American citizens the right to bear arms.

Trump’s claim that Lamb voted for Pelosi to be House speaker is wrong.

Lamb kept his campaign pledge not to support the San Francisco Democrat. Instead, he voted for House Rep. Joseph Kennedy III of Massachusetts.

Pelosi ended up winning the speakership regardless.

Lamb responded to the president’s tweet on Monday, writing: ‘These people have been lying about my record since the day I became a candidate.

‘It hasn’t stopped, and it won’t stop, until we beat them at the ballot box in November.’

Parnell gladly accepted the president’s endorsement, writing on Twitter: ‘Thank you Mr. President. I was lucky to be a small part of an incredible team. 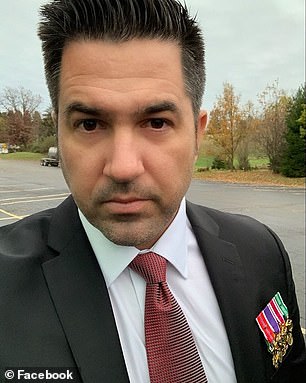 ‘I was truly blessed to be surrounded by heroes who taught, coached, & mentored me every step of the way.

‘America is an exceptional nation.’

Trump’s endorsement of Parnell and attack on Lamb was a response to a tweet from Parnell, who posted a message of praise for the president on Friday.

‘In 2006 I was wounded in Afghanistan,’ Parnell wrote.

‘I was medically retired from the Army in 2010 & left the military with next to nothing.

‘I was in rough shape. 10 yrs later the President of the United States is giving me shoutouts.

‘Democrat or Republican this is damn cool!

Twitter users were outraged that the president went after a military veteran on Memorial Day.

‘The President of the United States just called Conor Lamb, a major in the U.S. Marine Corps Reserve a fraud on #MemorialDay,’ tweeted Alex Cole.

‘Lamb is a former marine.

‘Trump is a draft dodger who skipped a memorial once because it would mess up his hair.’

During the Vietnam War, Trump avoided military service after getting several deferments.

One of Trump’s five draft deferments came as a result of a physician’s letter stating he suffered from bone spurs in his feet.

Scott Dworkin tweeted: ‘Trump just attacked Dem Rep and Ret Marine Corps Captain Conor Lamb on Memorial Day, because Trump is a washed up pathetic draft dodger who hates the American military and everyone in it. It really is that simple.’

Another Twitter user tweeted: ‘Conor Lamb is who you are referring to and he served in the US Military. Of course Trump would use Memorial Day to smear a US Veteran.’

In November 2018, Trump skipped a memorial event for soldiers who died in World War I in France because of the rain.

White House officials said the decision was taken due to the weather and cited security concerns in hastily arranging a motorcade.

Scott Dworkin tweeted: ‘Trump just attacked Dem Rep and Ret Marine Corps Captain Conor Lamb on Memorial Day, because Trump is a washed up pathetic draft dodger who hates the American military and everyone in it.

‘It really is that simple.’

Another Twitter user tweeted: ‘Conor Lamb is who you are referring to and he served in the US Military. Of course Trump would use Memorial Day to smear a US Veteran.’

‘The incompetent serial draft dogger is calling a veteran congressman an American fraud on #MemorialDay,’ tweeted another Twitter user.

‘So much for the party of we love our veterans and military.

‘This party must die and buried to never ever resurrect.’

Parnell responded to several Twitter posts from people outraged that Trump would go after a military veteran on Memorial Day.

Lamb was a military prosecutor who handled rape and sexual assault cases.

‘Trump went after Lamb for pretending to be a pro Trump moderate in a Trump district to get elected.

‘Truth is, Lamb votes with Pelosi 90+% of the time & voted for both charges of impeachment.’

The president was impeached by the House of Representatives over allegations that he held up military aid to Ukraine so that its government would investigate Joe and Hunter Biden.

Trump was eventually acquitted by the Republican-controlled Senate.