President Donald Trump spoke to Juan Guaido, the opposition leader seeking to restore democracy in Venezuela, for the first time since an uprising to remove Nicolas Maduro from power gained the United States’ backing.

Trump contacted Guaido to ‘congratulate him on his historic assumption of the presidency,’ a White House statement glossing over the chaos said.

The U.S. president warned Americans not to travel to Venezuela early Wednesday morning, echoing his State Department’s warning that the country is unstable.

He credited his sanctions for a new offer from Maduro to negotiate while clinging to power and control of the Venezuelan military.

President Donald Trump warned Americans not to travel to Venezuela on Wednesday, echoing his State Department’s warning that the country is unstable, while crediting his sanctions with dictator Nicolas Maduro’s offer to negotiate 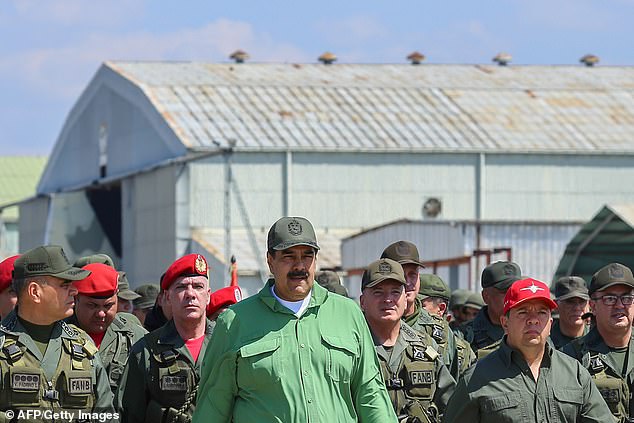 Maduro said overnight that he would be willing to sit down with opposition leader Juan Guaido and international mediators. He’s refusing to bow to demands that he hold a free and fair election immediately, however 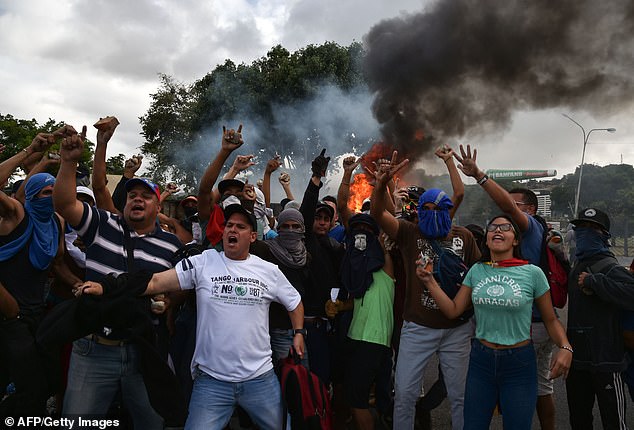 Venezuelan opposition demonstrators, chant slogans during a protest against the government of President Nicolas Maduro, on the anniversary of 1958 uprising that overthrew military dictatorship in Caracas on January 23 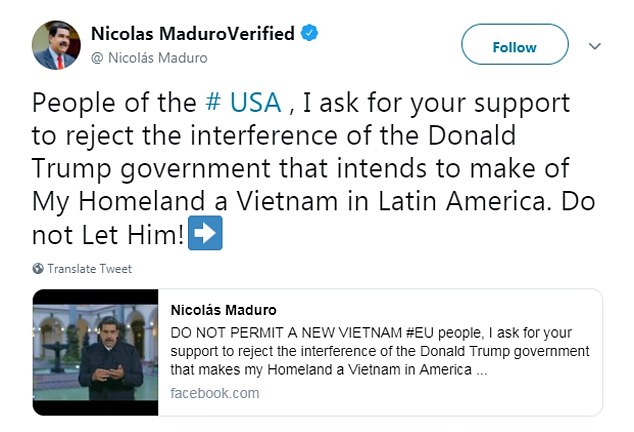 Maduro has accused the United States of orchestrating a coup, and appealed to American citizens on social media early Wednesday morning to stop its government from interfering in the affairs of Latin America

Maduro said overnight that he would be willing to sit down with Guaido and international mediators. He’s refusing to bow to demands that he hold a free and fair election immediately, however.

‘Maduro willing to negotiate with opposition in Venezuela following U.S. sanctions and the cutting off of oil revenues,’ he announced. ‘Guaido is being targeted by Venezuelan Supreme Court. Massive protest expected today. Americans should not travel to Venezuela until further notice.’

The White House announced several hours later that he’d spoken to Guaido on the phone, their first known communications since the upheaval.

Contact with Guaido had been limited to Mike Pence, the vice president of the United States, prior to the call.

White House spokeswoman Sarah Sanders said in a statement that on Wednesday morning President Trump spoke with Guaido to ‘congratulate him on his historic assumption of the presidency and to reinforce President Trump’s strong support for Venezuela’s fight to regain its democracy.

‘Interim President Guaido thanked President Trump for the United States’ commitment to freedom and prosperity in Venezuela and the region, and noted the importance of the large protests across Venezuela against former dictator Maduro, set to occur today and Saturday.

‘They agreed to maintain regular communication to support Venezuela’s path back to stability, and to rebuild the bilateral relationship between the United States and Venezuela,’ Sanders said.

Amid the increasing tension, the State Department warned Americans on Tuesday against traveling to the nation, which is seeing a resurgence of street protests and deaths of demonstrators, amid continuing chaos in the nation.

Guaido assumed the presidency of Venezuela last week on a pledge to restore democracy, and the U.S. swiftly recognized him as the leader of the Latin American country. He is the head of the Venezuelan National Assembly, a body that Maduro has tried to totally undermine by having the democratically elected body replaced and stripped of its powers.

Maduro has accused the United States of orchestrating a coup, and appealed to American citizens on social media early Wednesday morning, local time, to stop its government from interfering in the affairs of Latin America.

‘People of the # USA , I ask for your support to reject the interference of the Donald Trump government that intends to make of My Homeland a Vietnam in Latin America. Do not Let Him!’ Maduro tweeted.

He shared a direct to camera video on Twitter and Facebook, in Spanish, alongside the message in which he made a similar plea.

Maduro also claimed that Donald Trump ordered the Colombian government and mafia to assassinate him, after a mystery Russian jet landed in Venezuela this week ‘to ship out gold from the central bank.’

He said that he has no doubt that the US President ‘gave the order to Colombia to kill me’ and that if something happens to him ‘Donald Trump will be responsible.’

In other social media messages on Tuesday and Wednesday, he shared photos of himself rallying soldiers during a military exercise, and announced on Twitter on that he’d deploying 50,000 troops to keep the peace in neighborhoods.

‘We have an extraordinary operational readiness, in keeping with the national defense,’ he said in one.

He proclaimed in another: ‘I am and will be at the forefront of this battle. I count on the discipline and loyalty of the soldiers and soldiers of the Homeland. We are going to the deployment for peace, independence and sovereignty!’ 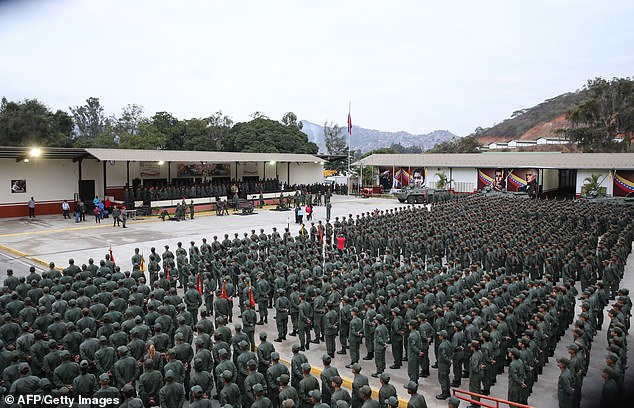 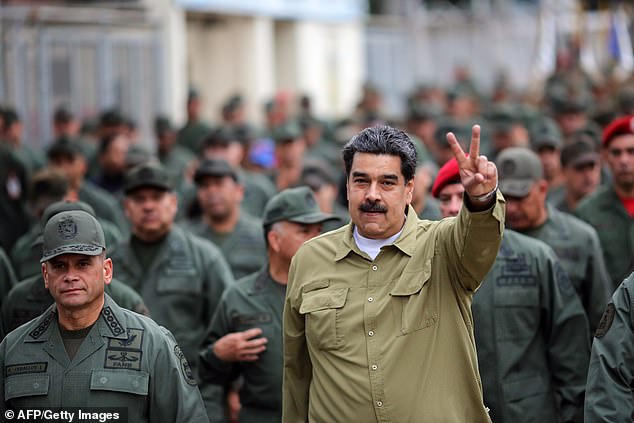 Maduro shared photos of himself rallying soldiers during a military exercise, and announced on Twitter on that he’d deploying 50,000 troops to keep the peace in neighborhoods. This is a handout photo released by his government

The Trump administration has been ratcheting up pressure on Maduro, granting Guaido the ability to access the regime’s frozen U.S. bank accounts and issuing new sanctions intended to dry up Maduro’s remaining funds.

Monday the U.S. Treasury Department slapped sanctions on Venezuela’s state-owned oil companies and set in place a system to freeze accounts that also could be placed under Guaido’s control.

Until the shift in U.S. policy, Guaido, who declared himself the legitimate president of the country, could only access accounts maintained by the government and the nation’s central bank.

Maduro’s regime immediately hit back, with the nation’s attorney general announcing that Guaido was not free to leave the country.

Venezuelan Attorney General Tarek Saab said he had asked the Supreme Court to open a preliminary investigation into Guaido, accusing him of helping foreign countries to interfere in internal matters. He also asked the court to impose a travel ban on the 35-year-old leader and to freeze his bank accounts.

‘We denounce the illegitimate former Venezuelan Attorney General’s threats against President Juan Guaido. Let me reiterate – there will be serious consequences for those who attempt to subvert democracy and harm Guaido,’ Bolton tweeted. 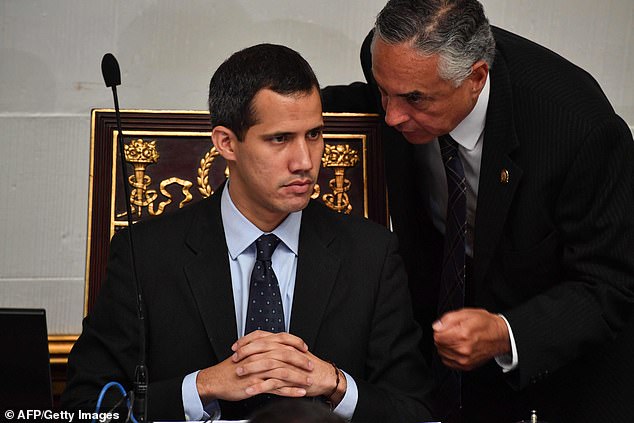 The State Department announced that Venezuela’s National Assembly head and self-proclaimed ‘acting president’ Juan Guaido could access the regime’s U.S. bank accounts, in the latest move to pressure the regime of President Nicolas Maduro, on Tuesday 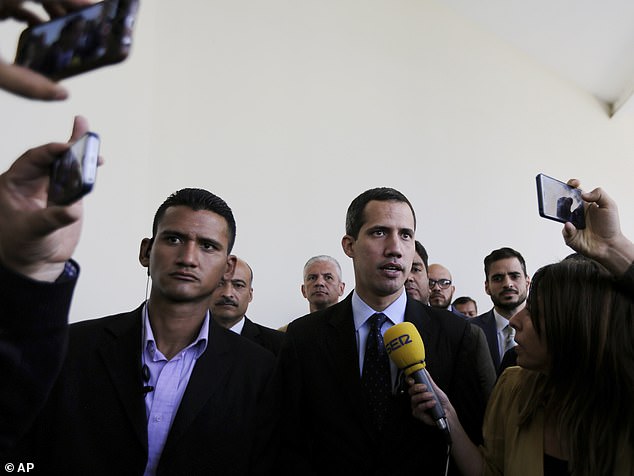 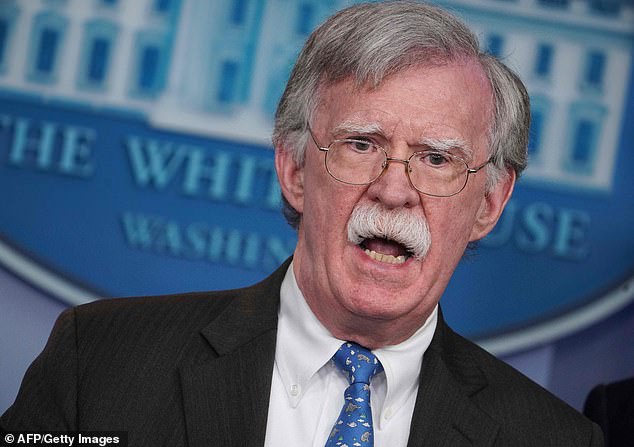 ‘There will be serious consequences for those who attempt to subvert democracy and harm Guaido,’ tweeted U.S. National Security advisor John Bolton afterward

He said at the White House Tuesday his nation now has a ‘unique opportunity’ after 20 years of fighting for democracy.

‘We have a united opposition right now … We have a strong national assembly … And we have the democratic world backing us, supporting our agenda, so this is a unique opportunity,’ he told reporters.

‘This is a fight between a dictatorship, which is totally controlled by the Cuban regime, against the free world. We cannot do this alone,’ he added.

Announced on Monday and aimed at curbing crude exports to the United States and driving Maduro from power, thy were the strongest measures yet against the 56-year-old former union leader who has overseen economic collapse and an exodus of millions of Venezuelans in recent years.

The measures triggered higher global oil prices, angry responses from China and Russia and the first serious moves against Guaido since he challenged Maduro’s claim on the presidency last week.

Since last week, the United States and several other countries have recognized Guaido as Venezuela’s legitimate head of state and denounced Maduro as a usurper.

Maduro, sworn in on Jan. 10 for a second term after disputed elections last year, accuses Guaido of staging a U.S.-directed coup against him. Maduro is backed by a dwindling number of countries, including Russia and China.

Maduro’s inauguration sparked protests throughout Venezuela. Over 40 people are believed to have been killed in political violence last week, including 26 shot by pro-government forces, five killed in house raids and 11 during looting, U.N. human rights spokesman Rupert Colville said on Tuesday.

Guaido said on Tuesday he did not underestimate the threat of imprisonment but did not believe it was ‘anything new.’ Many opposition leaders have been imprisoned in the South American nation.

‘We are here. We will keep acting and working to confront the humanitarian crisis,’ Guaido told a news conference.

Most experts believe the sanctions and other measures against Maduro will encourage him to step down only if he loses the support of the powerful military, which until now has been mostly loyal to the leftist ruling party founded by late President Hugo Chavez.

Maduro appeared on a television broadcast from a military base on Tuesday, praising the soldiers’ loyalty.

As a lawmaker who heads the National Assembly, Guaido has immunity from prosecution unless ordered by a top court. However, the Supreme Court is loyal to Maduro and is expected to quickly open the investigation.

The U.S. State Department said on Tuesday it had certified Guaido’s authority to control certain assets held by the Federal Reserve Bank of New York or other U.S.-insured banks, including government and central bank accounts.

PDVSA responded to the sanctions by ordering customers with tankers waiting to load crude destined for the United States to prepay, according to sources. Such prepayment could be in violation of the sanctions, setting the stage for a standoff at the ports.

PDVSA is also seeking to sidestep the sanctions by asking major buyers, including U.S. refiners, to renegotiate contracts, sources said.

The Kremlin condemned the sanctions as illegal interference, while China said they would lead to suffering for which Washington would bear responsibility. Both countries have lent billions of dollars to Venezuela and are concerned about new stress on debt payments.

The new U.S. sanctions could cause problems for Venezuela when it comes to servicing its sovereign debt to Russia, which stands at $3.15 billion, Russian Deputy Finance Minister Sergei Storchak told reporters on Tuesday.

In Geneva, senior U.S. and Venezuelan diplomats traded jibes at a disarmament conference. Venezuela’s ambassador, Jorge Valero, said the administration of U.S. President Donald Trump was preparing a ‘military invasion’ and questioned whether Washington had the moral authority to ‘impose a diktat’ on Caracas.

Venezuela has sunk into economic and political turmoil under Maduro’s socialist government, with inflation seen rising to 10 million percent this year.

The loss of revenue from the United States, the No. 1 buyer of Venezuelan crude, is sure to further hamper the government’s ability to import basic goods like food and medicine, exacerbating a humanitarian crisis that has prompted more than 3 million people to leave the country in recent years.

‘Sanctions on Venezuela will lead to the deterioration of conditions of people’s lives,’ Chinese Foreign Ministry spokesman Geng Shuang told a news briefing in Beijing.