President Trump reportedly has raised more than $30million for his reelection bid in the first quarter of 2019 – which is roughly equal to the amount raised by the top two Democratic candidates combined.

Tim Murtaugh, the Trump campaign’s director of communications, says that overall the president has so far amassed a whopping $40.8million war chest.

The substantial funds give Trump a head start over his Democratic rivals, who are fighting to emerge from a field of 18 candidates, according to CNN.

Senator Bernie Sanders of Vermont is the Democratic candidate who has raised the most funds.

President Trump raised more than $30million in the first quarter of 2019, a top campaign aide says

In the 41 days since he announced his candidacy, the democratic socialist has raised $18.2million.

Senator Kamala Harris of California has raised the second-largest amount of money during the first quarter of 2019 – $12million.

Overall, Sanders has a war chest of $28million.

But while Trump will have plenty of money to fund his reelection campaign, whoever emerges from the Democratic field will have an enthusiastic base of donors.

During the first quarter, 10 Democratic candidates raised a combined total of $79.6million – which surpasses the $65.6million that the entire Democratic field raised during the early stages of the 2016 election cycle. 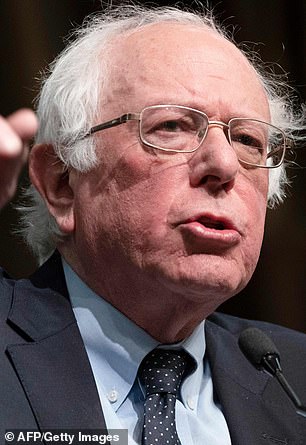 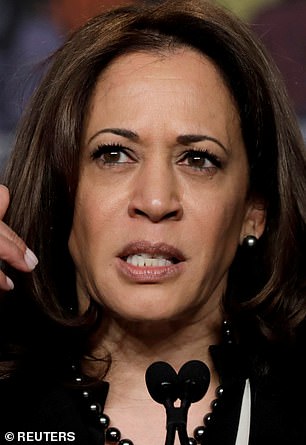 Senator Bernie Sanders (left) of Vermont is the Democratic candidate who has raised the most funds – $28million. Senator Kamala Harris (right) is in second place, raising $12million during the first quarter of 2019

The April fundraising deadline is one of the first big tests for the more than 15 Democrats vying for their party’s nomination to challenge Trump.

Also out-pacing Warren was Beto O’Rourke, the former U.S congressman from Texas who raised $9.4 million in the first 18 days, his campaign said.

Pete Buttigieg, the mayor of South Bend, Indiana, who recently saw a bump in opinion polls but is still considered a long-shot, announced earlier this month that he had raised $7 million during the first quarter.

Buttigieg officially announced his candidacy in South Bend on Sunday.

Within hours of the announcement, his campaign announced that he had raised an additional $1million.

Warren raised more than two other members of the Senate vying for the nomination.

Amy Klobuchar and Cory Booker each raised about $5 million.

On Monday, Democratic candidates are expected to file reports with the Federal Election Commission which will shed more light on the extent of their fundraising efforts.