The Trump Campaign has re-ignited the buzz around an image of the president’s head pasted onto Sylvester Stallone’s body, claiming there’s ‘no proof’ it was doctored.

Donald Trump was mocked around the world for tweeting a depiction of himself as the film character Rocky Balboa but on Wednesday, the official Twitter account for his bid to stay in the White House in the 2020 Elections hit back. 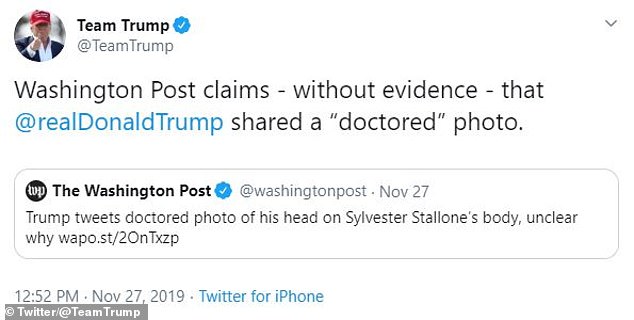 The photograph appears to show exactly the same body used in promotional materials for Rocky III, merged with the 73-year-old leader’s head and a different background.

He shared it Wednesday as he bragged that doctors’ praised his physique during his examine.

‘The first thing they do is say, “Take off your shirt, sir, and show us that gorgeous chest. So we want to see. We’ve never seen a chest quite like it.” No but seriously,’ he told a Florida campaign rally.

It was pointed out in the article retweeted and commented on by Trump’s staff.

The social media manager may have been poking fun at Trump’s many denials and accusations of fake news, perhaps intentionally to cause a fuss.

Putting focus on the term ‘doctored’ possibly alluded specifically to the intention behind the snap, as most people familiar with Trump would be fully aware it does not resemble his frame in real life.

They may have taken issue with the term ‘doctored’ often having connotations of intent to deceive, while it more generally means to falsify.

Either way, social media users fumed that they were not buying it.

‘OMFG – you people are morons,’ a social media user posted. 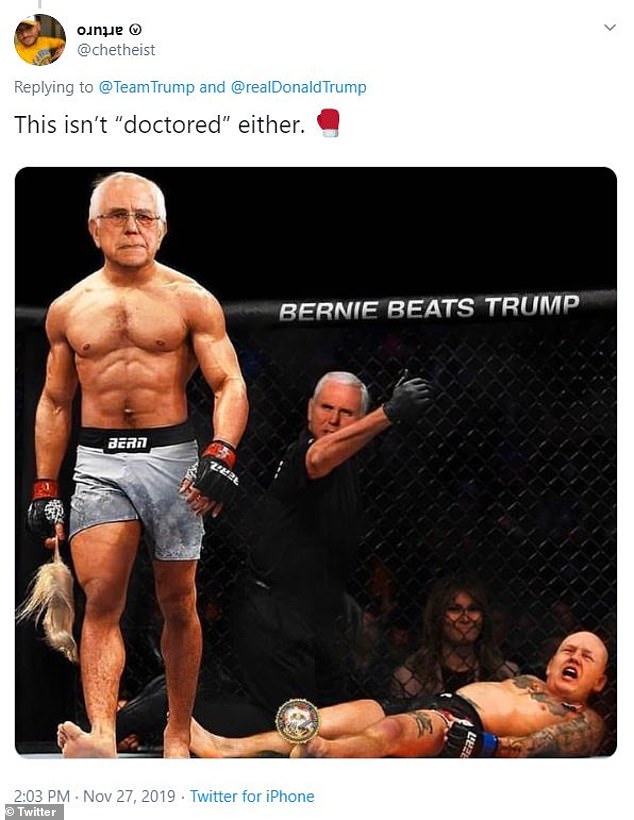 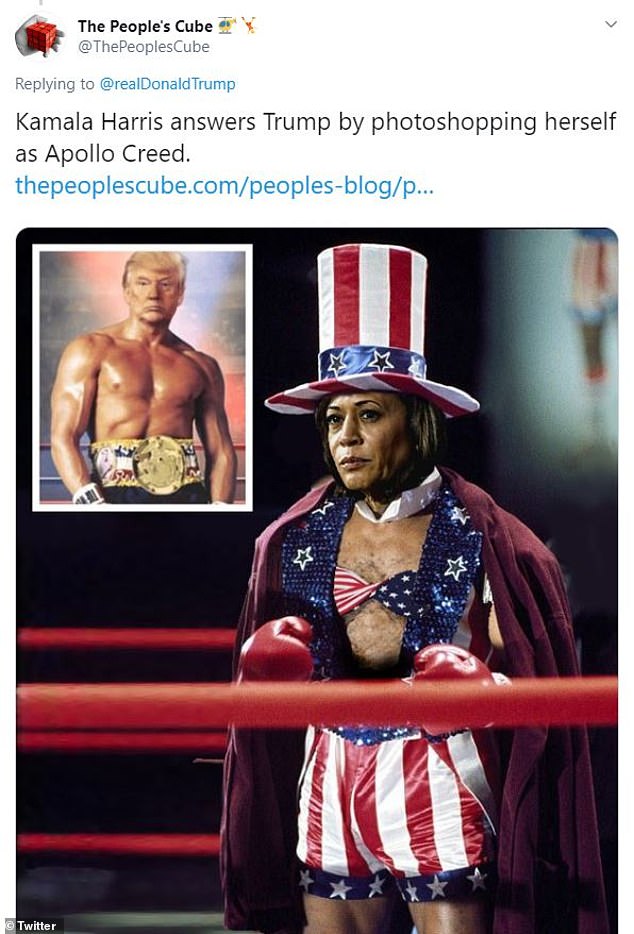 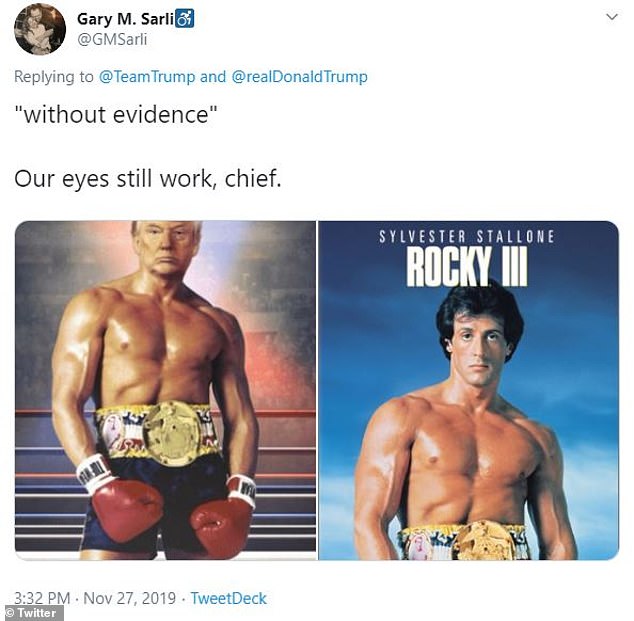 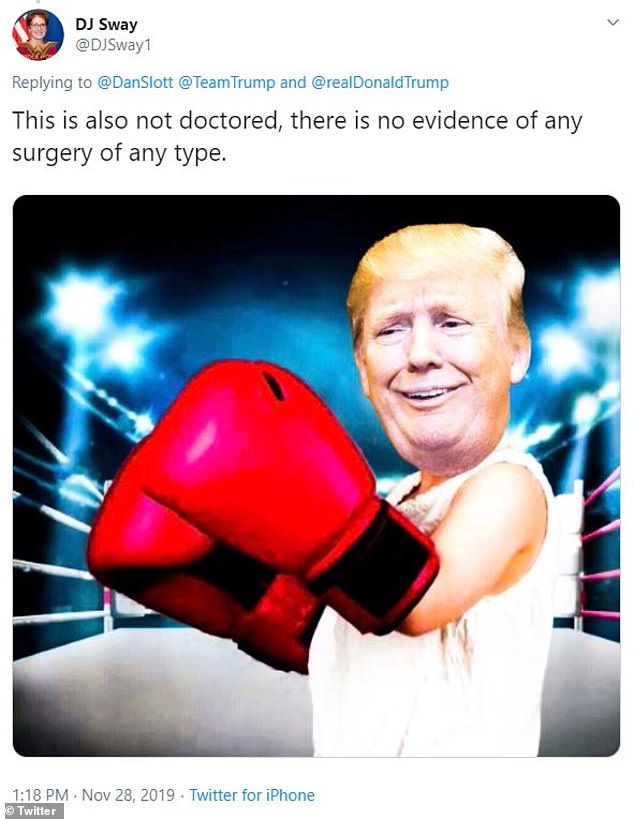 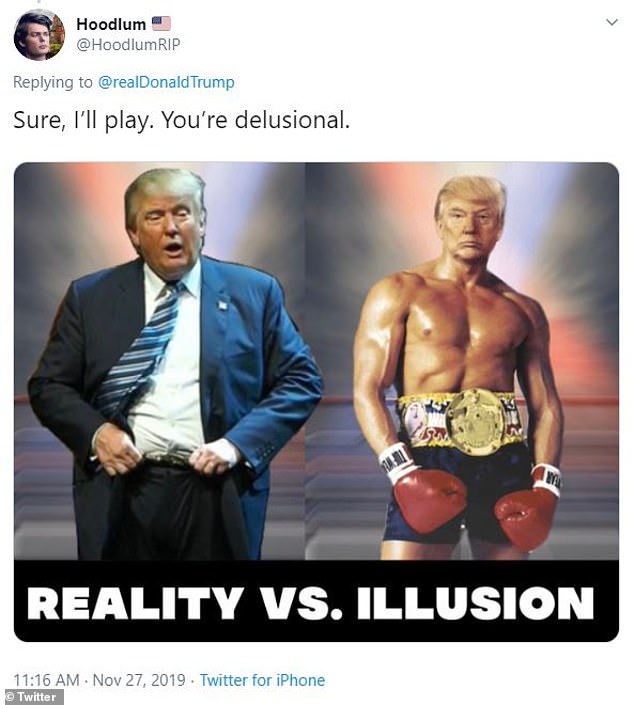 Another social media user called the president ‘delusional’ in a meme showing ‘reality vs. illusion’

‘Need evidence? These are definitely undoctored photos. Check them out,’ one Twitter user wrote showing an image of Trump golfing and comparing his body to a shirtless Barack Obama.

One seemingly joked that Stallone may actually have the body of Trump in a shot that showed them switch bodies.  A similar image joked: ‘Please respect the original.’

For two and half years Trump has seemingly intentionally sparked up excitement on Twitter around his apparent typo when tweeting the word ‘covfefe’. 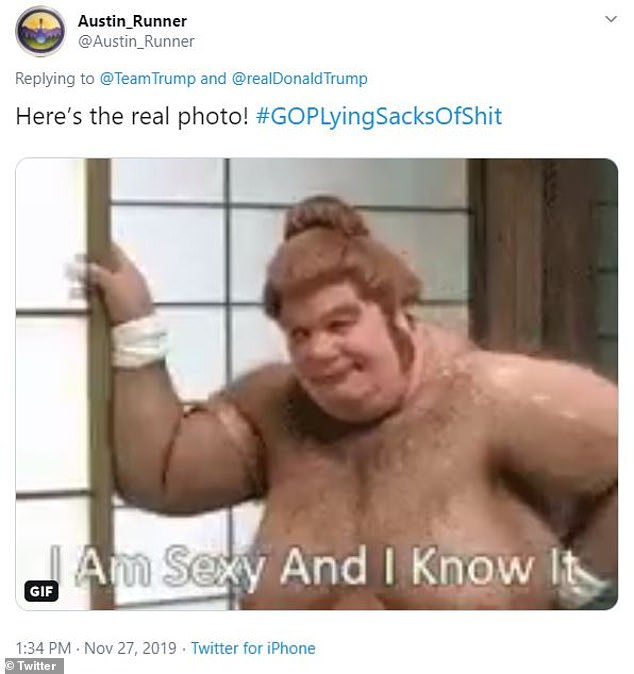 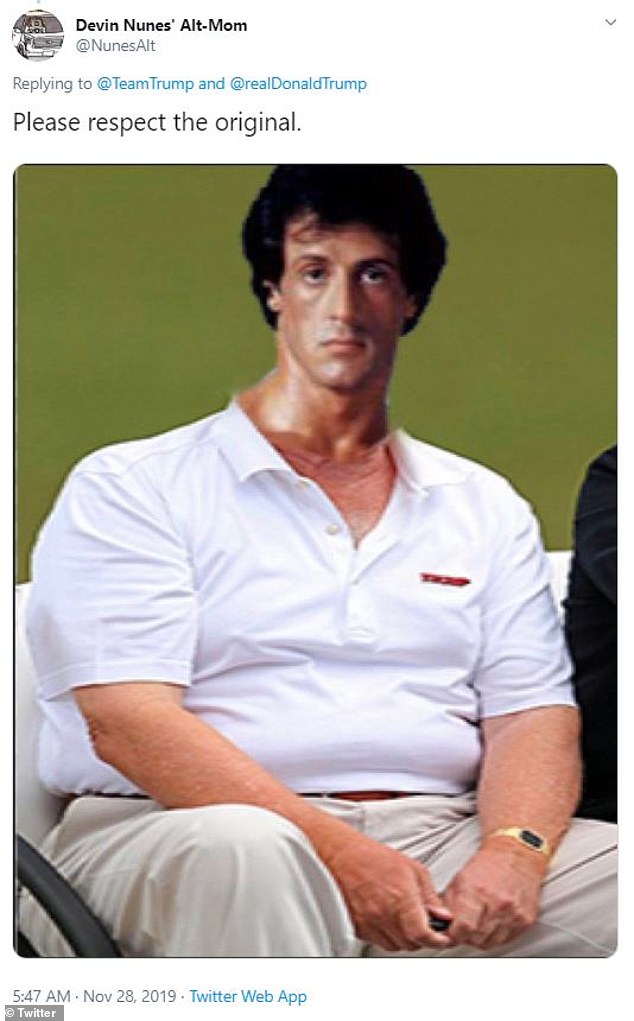 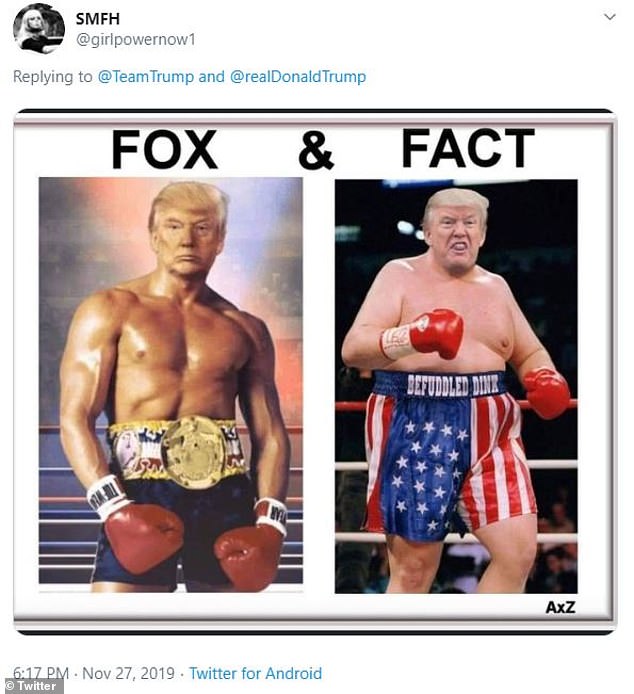 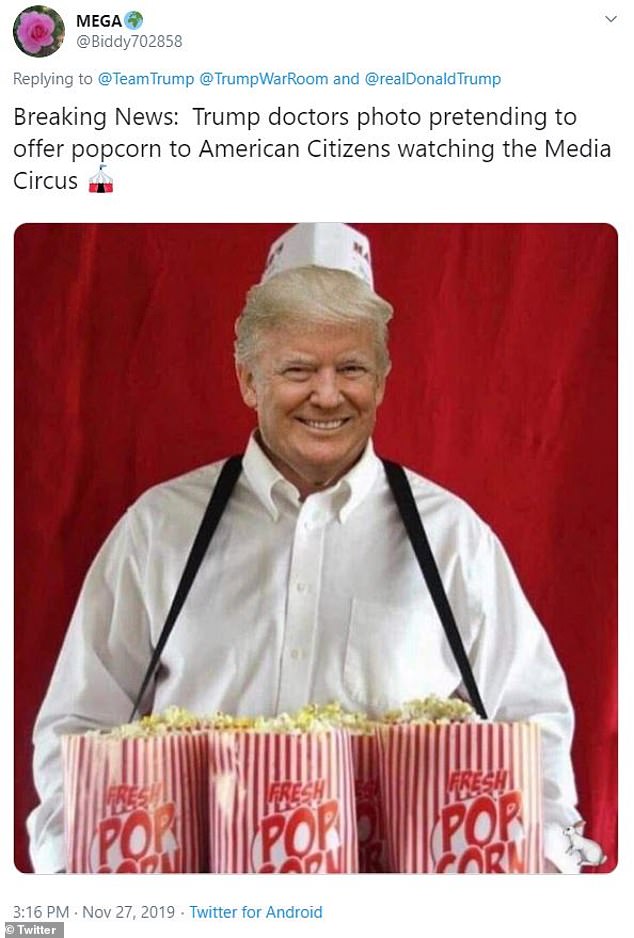 Earlier this month he drummed up a buzz again as he said it could actually have a ‘deep meaning’.

Just after midnight on May 21, 2017, he tweeted: ‘Despite the negative press covfefe’.

It’s believed the infamous utterance was a mistake because and he meant to type ‘coverage’ because he then deleted the tweet.

Instead of pretending the tweet never happened, six hours later Trump invited the world in another post to figure out the ‘true meaning of ‘covfefe’ and it went viral.

A year after the bizarre tweet, social media users waxed nostalgic about the typo and even referred to the anniversary as Covfefe Day.

Trump has still not confirmed whether it was a mistake. 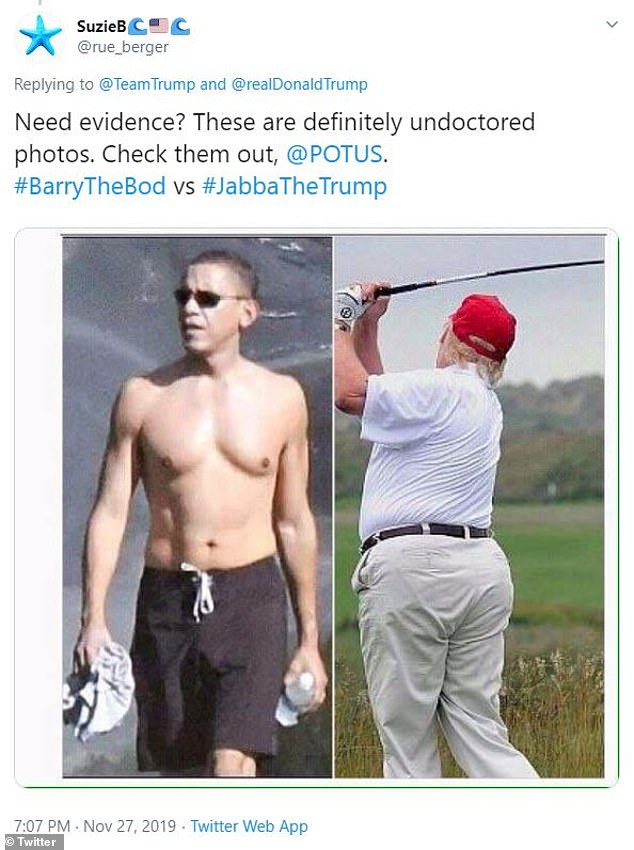 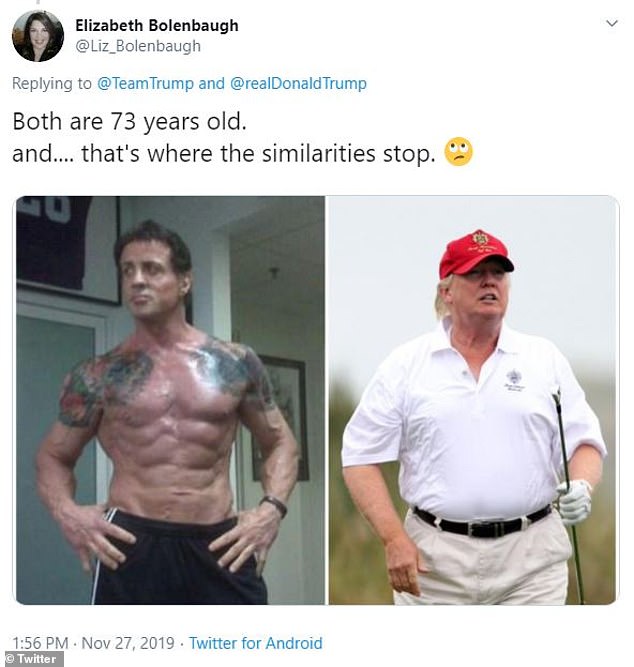