Trump chit-chats with reporters’ kids and gives them candy

Donald Trump opened the Oval Office on Friday to a purple-haired unicorn, a Batgirl, a handful of witches and assorted Star Wars characters as some members of the White House press corps brought their kids to a Trick-or-Treat event.

‘I cannot believe the media produced such beautiful children!’ Trump said, motioning to the reporters he often accuses of fabricating stories.

Trump drew laughter from the grown-ups and petrified stares – at first – from the kids.

‘How the media did this, I don’t know,’ the president said.

‘I cannot believe the media produced such beautiful children!’ Trump said Friday as report4ers brought their kids to the Oval Office for some early Trick-or-Treating 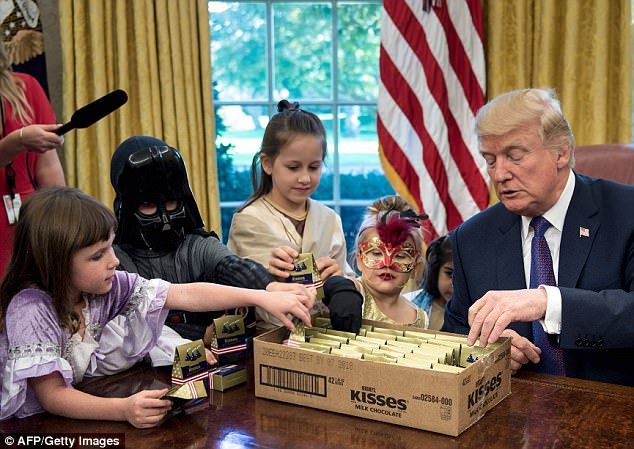 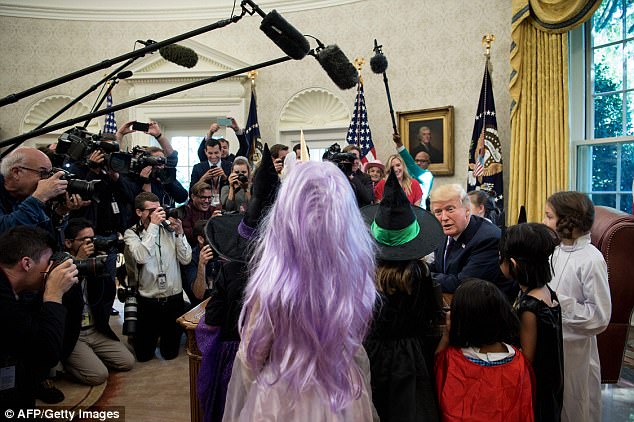 Trump is at home with a crush of photographers chronicling his life, but for most of the kids it was their first time in the harsh spotlight of political journalism

By the end of the five-minute visit he was chortling with grade-schoolers and asking a black-hatted witch: ‘So how does the press treat you?’

‘I bet you get treated better by the press than anybody in the world, right?’ the president asked, drawing laughter and camera-shutters. ‘I think so.’

‘Everybody’s scared of it!’ offered his sister, who came dressed as Rey from ‘The Force Awakens.’

Trump was faced with the customary array of still and video cameras that document every breath of his presidency from the distance of a yard or two.

For most of the children, though, it was their first time in the harsh spotlight of American political journalism.

The president seemed willing to forgo the chance to poison the well for purveyors of ‘fake news.’ 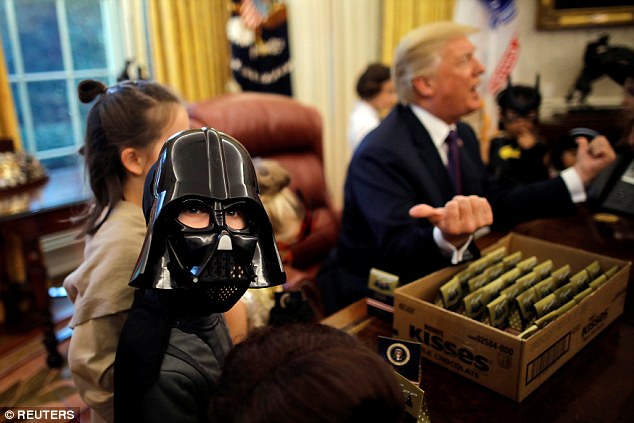 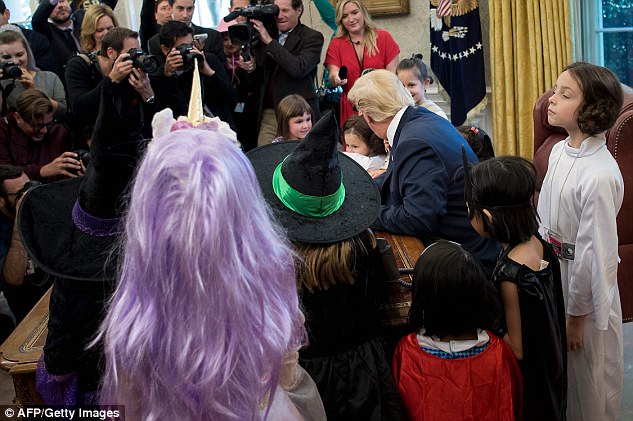 Turning to a small Supergirl who seemed to be crying, Trump reassured her: ‘They’re the – that’s the press.’

Learning that she is Japanese-American, the president told her: ‘I’m going to be in Japan in two weeks! I’ll be in Japan.’

‘I know,’ the girl responded as a bun-haired Princess Leia looked on.

West Wing staffers, including one young woman in cowboy boots, a red neckerchief and a ten-gallon hat, allowed the kids to traipse through the Eisenhower Executive Office Building for a Trick-or-Treat adventure – but not until Trump gave them their first White House candy.

‘I don’t think they want any gifts or candy, right?’ he joked in a grandfatherly moment that would bring eye-rolls anywhere else.

And instead of handing out candy one at a time, he passed the tray around and chatted with the kids.

‘Who likes this?’ Trump asked.

‘Well,’ he said, surveying an audience of tiny tykes, ‘you have no weight problems. That’s the good news. Good. So you take out whatever you need.’

‘These are beautiful, wonderful children,’ said the president, a father of five himself. 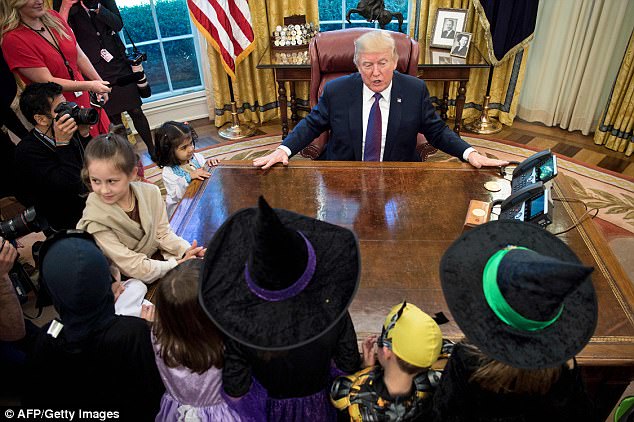 ‘Are you going to grow up and be like your parents?’ he asked the journalists’ kids, before thinking better of it and asking them not to answer 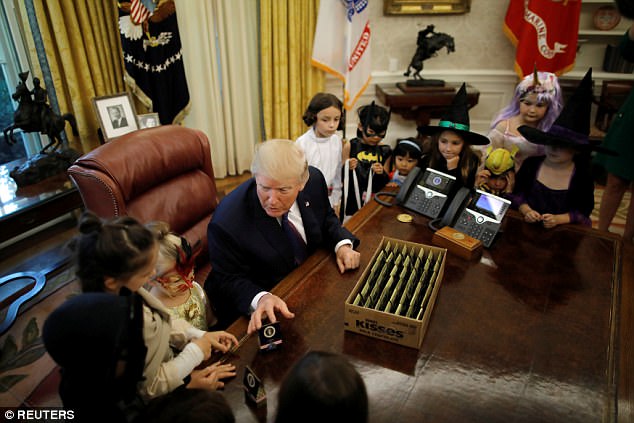 ‘Who likes this?’ Trump asked as he handed over the chocolate. ‘Well, you have no weight problems. That’s the good news. Good. So you take out whatever you need’

‘Are you going to grow up and be like your parents?’ he asked, before thinking better of it.

‘Mmmm, don’t answer thatm,’ he said. ‘It can only get me in trouble, that question. You have wonderful parents, right?’

Trump wouldn’t let the moment pass without lobbing a somewhat subtle jab at the reporters he loves to hate.

‘Congratulations, folks. You did a good job,’ he told the journalists as he motioned toward their kids.

Trump then pointed one finger at himself.

‘I wouldn’t say you did very well here,’ he said. ‘But really beautiful children.’