Trump cites former Clinton pollster’s criticism of Mueller probe to knock it as ‘A disgrace!’

President Donald Trump cited Hillary Clinton’s former pollster in his latest knock against the Russia investigation, calling it ‘a disgrace.’

Trump cited Mark Penn, who did polling for the Clintons from 1995 to 2000, in a tweet on Sunday, noting Penn says: ‘Why are there people from the Clinton Foundation on the Mueller Staff? Why is there an Independent Councel? To go after people and their families for unrelated offenses.’

Trump’s tweet refers to Jeannie Rhee, an attorney who represented both Hillary Clinton and the Clinton Foundation in unrelated cases in 2015. Rhee was a partner at WilmerHale at the time.

President Donald Trump cited Hillary Clinton’s former pollster in his latest knock against the Russia investigation, calling it ‘a disgrace’ She is the only person working on the special counsel operation with ties to the Clinton Foundation, despite the president’s suggestion today that there are more, as Washington Post fact checker Glenn Kessler today pointed out. Rhee also maxed out her campaign donations to Clinton’s 2016 presidential campaign.

Special Counsel Robert Mueller, a former FBI chief and a registered Republican, also came from WilmerHale directly to Justice Department probe, but he never worked directly for the Clintons in that capacity.

He did serve as a U.S. attorney while Bill Clinton was president prior to his nomination at the start of George W. Bush’s administration to FBI director.

Mueller left the FBI in 2013 and returned to the private sector, joining WilmerHale as a partner in 2014.

WilmerHale has represented people close to Trump, as well as the Clintons, even after Mueller’s appointment to special counsel in May of last year.

Another partner at the law firm, Jamie Gorelick, was an attorney for Jared Kushner and Ivanka Trump. She ended her legal representation of the president’s son-in-law in the Russia probe last July.

Former Trump campaign manager Paul Manafort was also represented by WilmerHale until the FBI raid on his home in August of 2017. Manafort’s counsel at the time was WilmerHale attorney Reginald Brown.

Trump regularly knocks the prosecutors working for Mueller as ‘angry Democrats’ based on the political leanings of the bulk of the probe’s lawyers.

‘The 13 Angry Democrats (plus people who worked 8 years for Obama) working on the rigged Russia Witch Hunt, will be MEDDLING with the mid-term elections, especially now that Republicans (stay tough!) are taking the lead in Polls. There was no Collusion, except by the Democrats!’ the president last week tweeted.

His repeated references to the ’13’ attorneys he believes are working against him includes a special counsel attorney who said in a years-old interview that he considers himself a Democratic voter.

A dozen have either donated to candidates affiliated with the political party or are registered Democrats themselves.

Penn was the chief strategist to Hillary Clinton’s first presidential campaign and a trusted aide to former President Bill Clinton during his battle for a second term in office.

He has recently defended Trump against what he has labeled ‘storm trooper tactics,’ however, and a ‘scorched-earth effort’ orchestrated by the ‘deep state’ within the government to take down the sitting president. 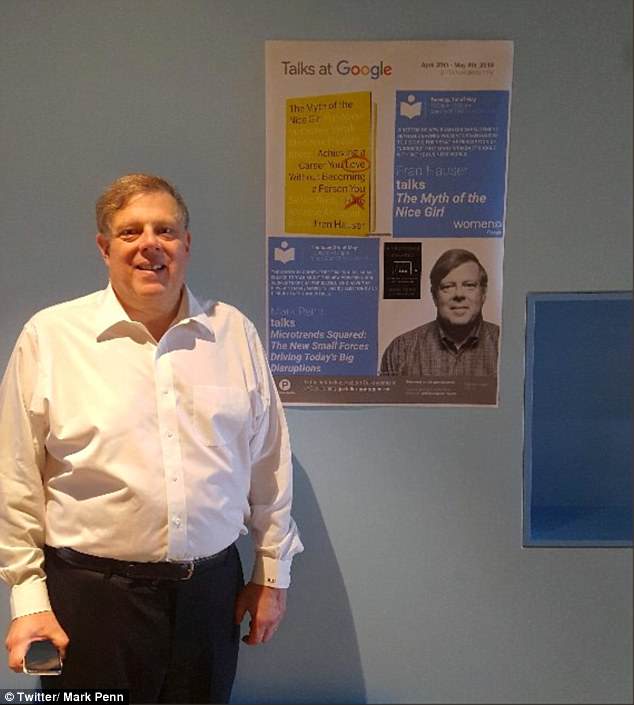 President Trump cited Mark Penn (pictured), who did polling for the Clintons from 1995 to 2000, to knock the Russia probe

On Fox News’ ‘Sunday Morning Futures,’ he said of Mueller’s probe:  ‘I still see that we don’t have the answer here. How this got started, why there was an independent counsel, why there are people from the Clintons who represented the Clinton foundation on Mueller’s staff, all of these questions here remain unanswered, and Mueller seems to have runaway power, using storm trooper tactics almost.’

Asked if Mueller was after Trump, Penn said: ‘Absolutely’

Hour later, the president quoted Penn and called the set-up a ‘disgrace.’

Senate Democratic leader Chuck Schumer quickly responded, saying ‘Special Counsel Mueller is a career prosecutor & law enforcement officer focused on getting to bottom of Russia’s meddling in our elections & any possible collusion with your campaign & a hostile foreign government.’

Penn wrote an op-ed in The Hill newspaper in May that got wide spread media attention, in which he turned on the Clintons and cited a ‘deep red’ state working against Trump’s administration.

‘Flush with 16 prosecutors, including a former lawyer for the Clinton Foundation, and an undisclosed budget, the Mueller investigation has been a scorched-earth effort to investigate the entirety of the Trump campaign, Trump business dealings, the entire administration and now, if it was not Russia, maybe it’s some other country,’ he wrote.

Mueller, a registered Republican who was appointed by Republican deputy attorney general Rob Rosenstein to investigate Russia’s actions in the presidential election. Of the 17 team members, 13 are registered Democrats, according to reports.

Since the investigation began, Mueller has built a criminal case against Trump’s former campaign chairman Paul Manafort while former Trump deputy Rick Gates struck a plea deal in March in addition to agreeing to testify.