I’ll PROVE there’s voter fraud! Donald Trump claims he is ‘compiling evidence’ of ballot misuse as he faces more questions on his opposition to letting voters vote by mail in November

President Trump said he would prove that there’s widespread voter fraud as he continued to push back on the idea that mail-in voting should be put in place for November’s presidential election due to coronavirus concerns.

‘I think there’s a lot of evidence, but we’ll provide you with some OK?’ he said at Wednesday’s press briefing. ‘And there’s evidence that’s being compiled.’

Democrats are pushing for mail-in options in case the coronavirus continues to impact the United States through the November general election. Trump and Democrat Joe Biden are expected to be on the ballot.

For days, Trump has countered that mail-in voting would lead to massive cheating.

Republicans in Wisconsin backed keeping in-person voting in place earlier this week, forcing voters to head to the polls during a global pandemic. 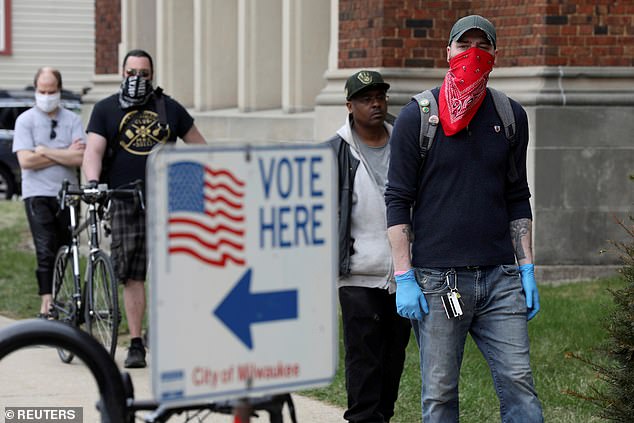 Wisconsin voters braved a global pandemic to cast votes Tuesday. Democrats have argued that mail-in options should be made available for the general election in case the country still sees cases of the coronavirus

The fraud example Trump pointed to in the briefing room Wednesday was an already debunked claim that a million people in California were discovered who ‘should not have voted’ in the 2016 presidential election.

Hillary Clinton’s large lead in California helped her win the national popular vote, despite Trump winning the White House through the Electoral College.

Trump painted a picture Wednesday of ‘all the things happening with votes by mail.’

‘I won’t stand for it. Well, We are going to find out about the proof, you will see what’s going on,’ Trump continued. ‘I’m not going to stand for it.’

Earlier on Twitter Wednesday, Trump had also said that mail-in voting ‘for whatever reason, doesn’t work out well for Republicans.’

‘It certainly hasn’t, but if you’re a senior citizen or somebody that needs it, I’m for it, but they have to be very careful,’ Trump offered when asked about his tweet at the daily coronavirus taskforce briefing.

Shortly after the briefing concluded, the president cleaned up his comments using Twitter explaining that there was a difference between some Americans using absentee ballots and full-on mail-in voting.

‘Absentee Ballots are a great way to vote for many senior citizens, military and others who can’t get to the polls on Election Day,’ Trump said. ‘These ballots are very different from 100% Mail-In Voting, which is “RIPE for FRAUD,” and shouldn’t be allowed!’

Also at the briefing Wednesday, Trump continued to tout voter ID laws, which are traditionally backed by Republicans and disliked by Democrats, who believe they disenfranchise poorer voters.