President Trump slammed Iran on Monday for denying the U.S. shot down one of its drones, suggesting people put on some scuba gear and go down to the ocean floor to take a look at it.

‘We did shoot down – unfortunately we had to shoot down a drone. The drone came down,’ he told reporters in the Oval Office Monday during a meeting with Pakistani Prime Minister Imran Khan.

‘Instead of saying, yeah, that happened, they lied. They say it didn’t happen. So we have – there’s a lot of proof. It’s called take a look at it on the ocean floor. Just go down there, take your scuba gear and go down there,’ he added.

His words suggest that the U.S. has not retrieved the drone it shot down earlier this month in the Strait of Hormuz. 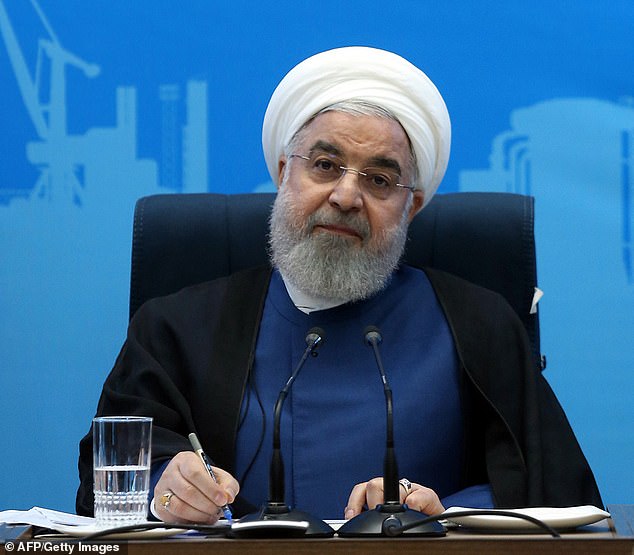 Tensions have been rising between Washington and Tehran, led by President Hassan Rouhani 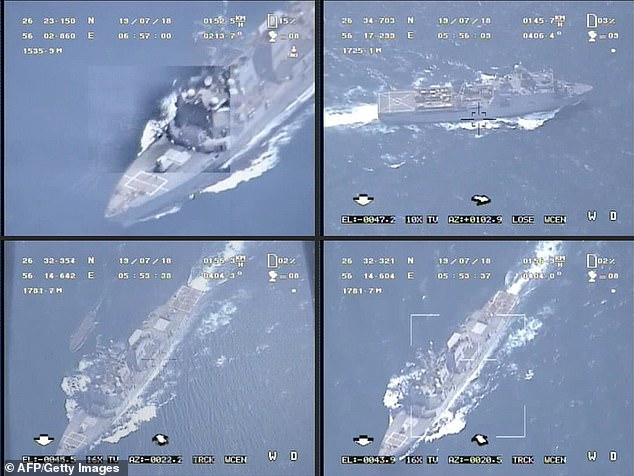 Iran claimed the U.S. shot down one of its own probes by mistakes, but Trump has repeatedly insisted it was Iranian hardware that went down.

In his rant against on Iran on Monday, Trump accused government officials of lying a lot and said it makes it hard for him to want to deal with them.

‘If they want to make a deal, it’s frankly getting harder for me to want to make a deal with Iran because they’ve behaved very badly. They’re saying bad things. I’ll tell you, it could go either way, very easily. Very easily. And I’m okay either way it goes,’ he said on the day after an Iranian media outlet released photographs of some of the 17 ‘CIA spies’ Tehran claimed to have captured.

‘They lie a lot,’ Trump said of the claim, which he also denounced on Twitter Monday morning.

‘That’s totally a false story. That’s another lie. They put out propaganda, they put out lies,’ he noted.

He noted he’s ready for the ‘absolute worst’ when it came to the Middle East country.

‘We are ready for the absolute worst and we’re ready for sense too, but we are very geared up. They are really the number one state of terror in the world,’ Trump said.

He also said Iran is a ‘very mixed up country.’

‘I think Iran doesn’t know where they are. I’ve been watching and reading a lot of reports. Right now, they’re a very mixed up country. They don’t know whether they’re coming or going,’ he said, adding: ‘They have a lot of problems. Whatever it is it is, I’m just going to sit back and look. We’ll see what happens.’

The president fumed that Iran wasn’t ‘respectful’ to the United States and argued they should have been after President Barack Obama gave them a sweetheart deal with the 2015 nuclear agreement, which Trump withdrew the U.S. from.

‘Instead of being respectful and thankful, which frankly they should have been to the United States and to President Obama for making that ridiculous deal, instead of being respectful, they put their finger up in the air – this finger, the thumb – and they disrespected the United States. They shouldn’t have done that. That was a big mistake. One of the best things I’ve done is terminate that ridiculous deal,’ he said.

Trump’s evident frustration with ran came as tension notched up between the two countries after a report of Tehran’s claim it captured 17 U.S. spies.

Photographs of some of the men were shared on Twitter on Monday by the Tasnim News Agency along with ‘details’ of their apparent work for the US. 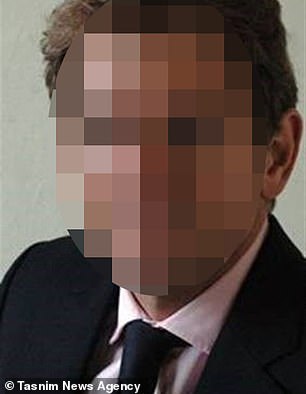 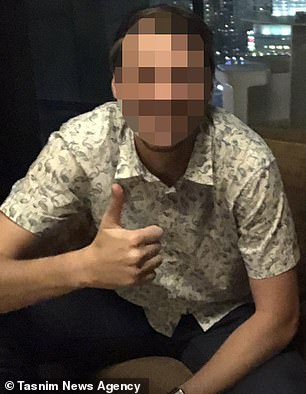 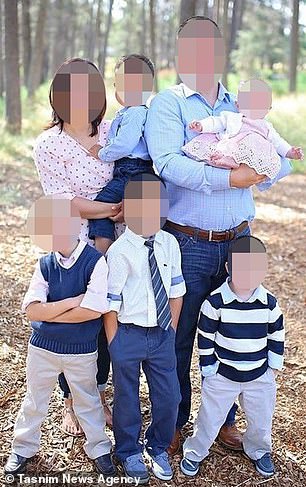 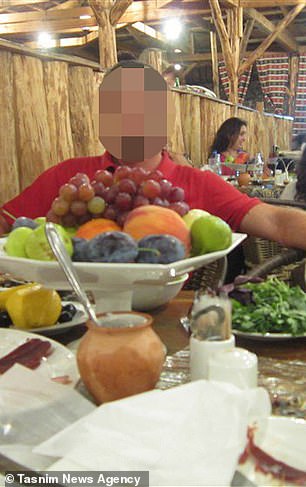 Some of the photographs included the alleged spies’ families. Iran says all are Iranian nationals but that they were lured into working for the US government 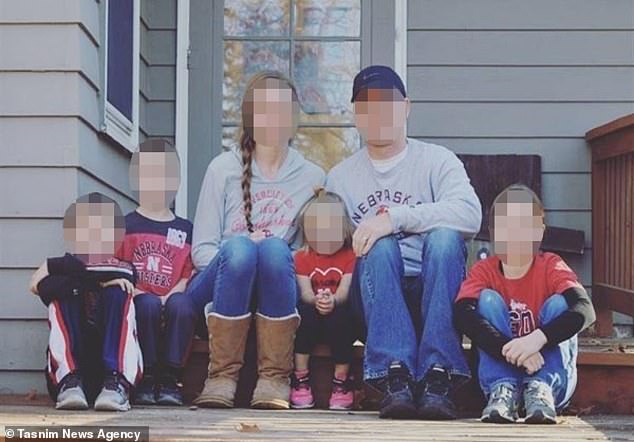 The images and information were released by the Iranian intelligence and security forces, the agency reported.  They have not been verified by the US or any other government.

All of the ‘spies’ are Iranian nationals who the Iranian government claims were lured by the US with the promise of getting visas, according to Iran, which claims they were arrested in the Iranian calendar year which ended in March.

Only now are their arrests being made public as the standoff between the West and Tehran intensifies.

As the photos emerged on Monday, President Trump denied that anyone had been arrested.

‘The Report of Iran capturing CIA spies is totally false,’ Trump wrote in a tweet.

‘Zero truth. Just more lies and propaganda (like their shot down drone) put out by a Religious Regime that is Badly Failing and has no idea what to do.’

‘Their Economy is dead, and will get much worse. Iran is a total mess!’ Trump wrote.

Iran’s security chiefs said they smashed an American spy ring that had planted U.S. agents at ‘sensitive sites’ in the country’s nuclear, military and cyber facilities.

The 17 suspects are all Iranians, some of them recruited by a ‘visa trap’ in which the CIA would target Iranian nationals as they applied to visit America, Iran claims. 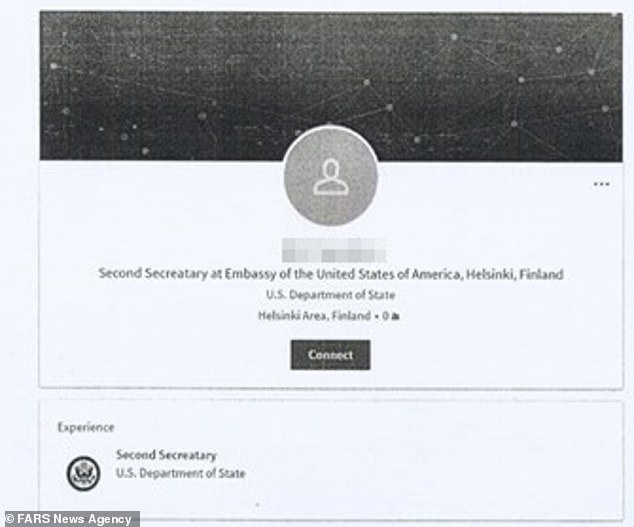 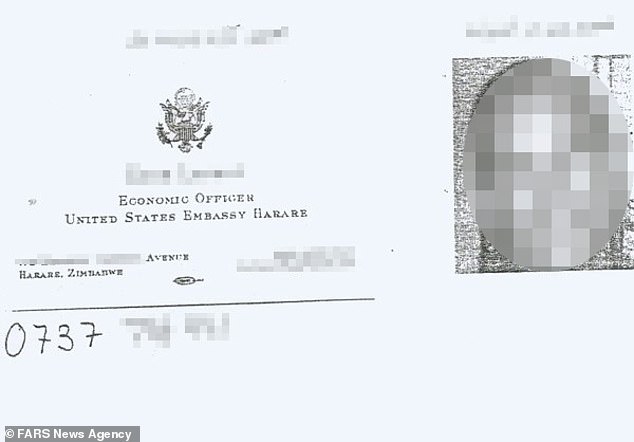 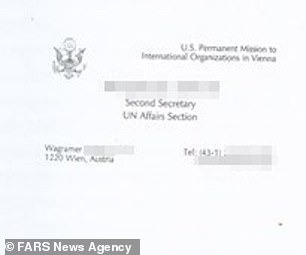 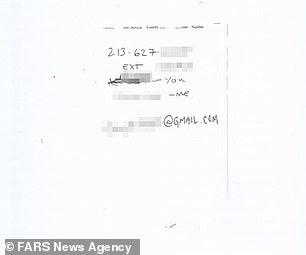 The news agency also shared photos of business cards, email addresses and LinkedIn profiles they say belong to some of the ‘spies’

A documentary that aired Monday on Iranian TV purports to show U.S. agents trying to recruit Iranian spies in the Middle East, although the footage has not been verified.

U.S. Secretary of State Mike Pompeo said in a Fox news Channel interview that Iran’s mullahs can’t be taken at their word.

‘It’s part of their nature to lie to the world,’ Pompeo said. ‘I would take with a significant grain of salt any Iranian assertion about actions they’ve taken.’

Iran says the suspects were arrested in the 12 months ending March 2019, but the regime is now publicizing the case now, just as tensions spiral in the Persian Gulf.

Tehran has been feuding with the West for weeks over the crumbling nuclear deal and a series of threats to Middle East shipping, which heightened again last week when Iran’s revolutionary guards seized a British tanker in the Straits of Hormuz. 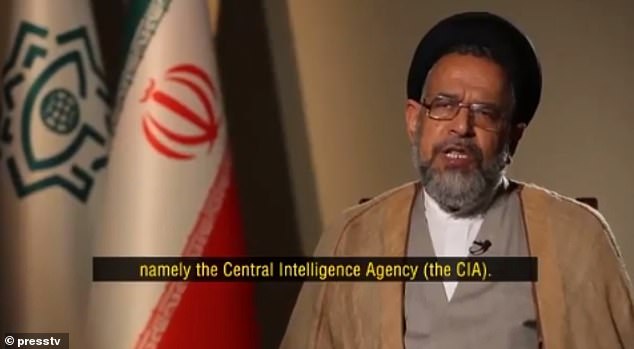 An Iranian documentary which aired on Monday alluded to some form of strike on the US, particularly the CIA 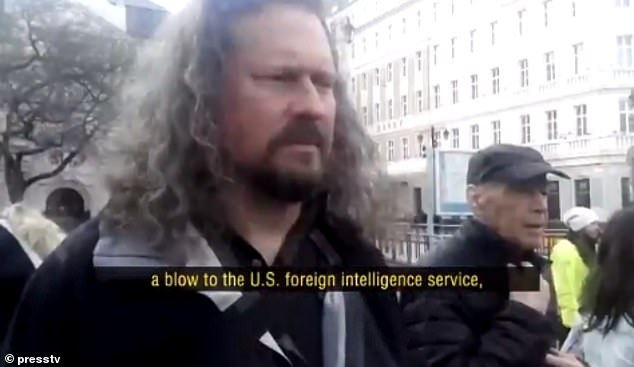 This man was highlighted in an Iranian documentary about alleged U.S. intelligence work in Iran, as officials announced they had arrested 17 suspects. The footage has not been verified 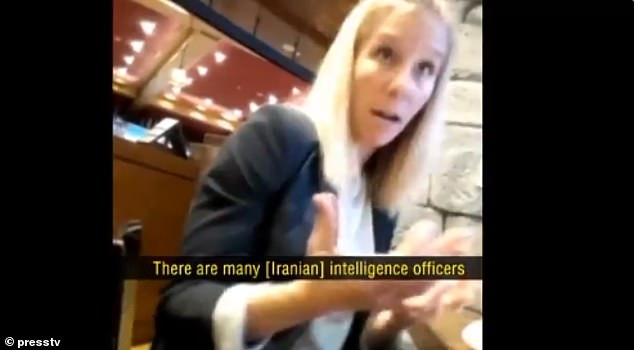 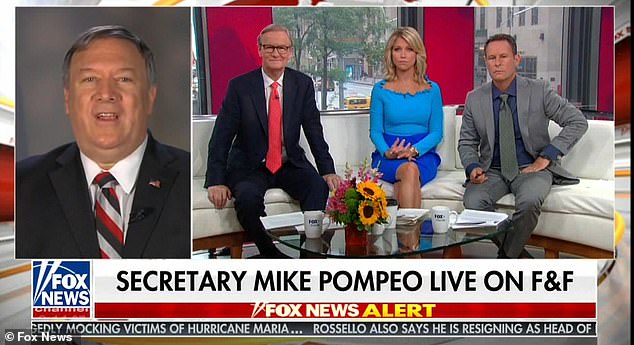 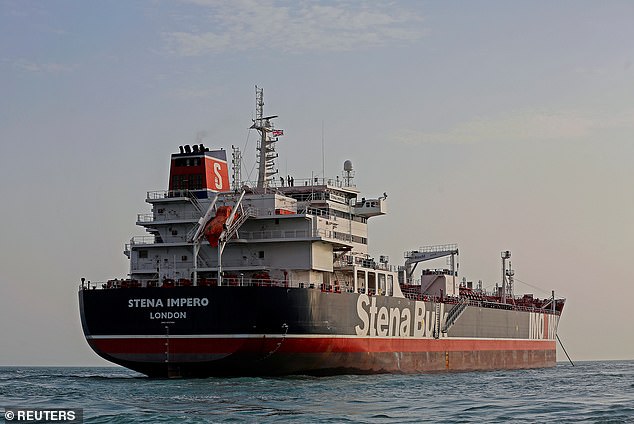 Centre of attention: Stena Impero, a British-flagged vessel owned by Stena Bulk, is seen at Bandar Abbas port on Friday after being seized by Iran

Middle East tensions mounted again at the weekend after Iran captured the UK-flagged Stena Impero, in retaliation for a British Royal Marine operation two weeks ago in which an Iranian vessel was seized off Gibraltar.

Video footage released by Iran showed the tanker being surrounded by speedboats before troops in balaclavas descend a rope from a helicopter onto the vessel.

Authorities said they impounded the ship on allegations it failed to respond to distress calls and turned off its transponder after hitting a fishing boat.