In an interview with CBS News’ Catherine Herridge, Trump called the Los Angeles Unified School District’s decision to start instruction in the fall online only a ‘terrible decision.’

‘Because children and parents are dying from that trauma, too. They’re dying because they can’t do what they’re doing. Mothers can’t go to work because all of a sudden they have to stay home and watch their child, and fathers,’ the president said.

President Trump said parents are dying from the ‘trauma’ of American schools not reopening amid the coronavirus pandemic. The president has pressed hard for schools to reopen and has suggested his Democratic opponents want them to stay closed for political reasons 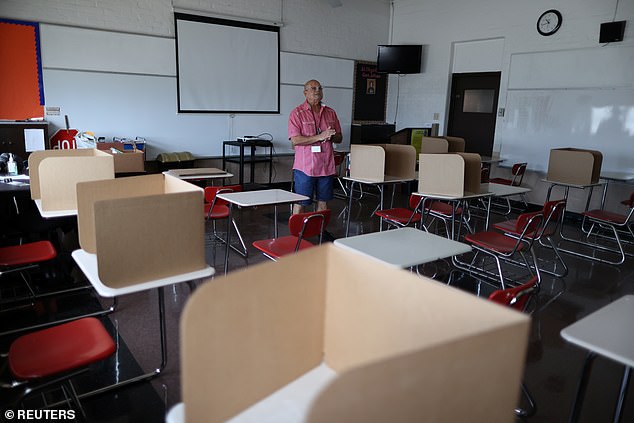 Social distancing dividers are placed on desks in a classroom in Montebello, California. President Trump criticized the Los Angeles Unified School District’s decision to begin fall instruction online only during an interview Tuesday with CBS News 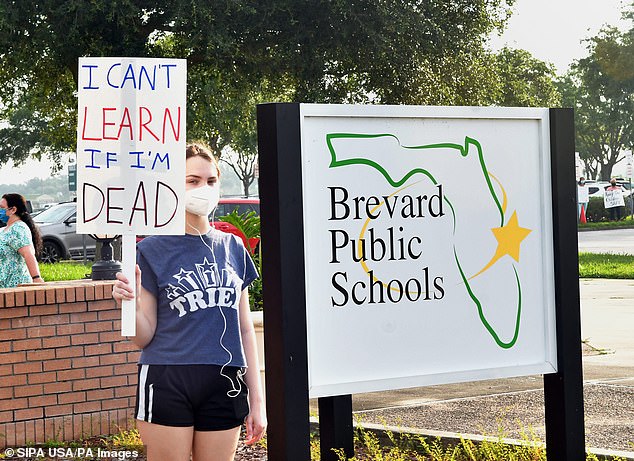 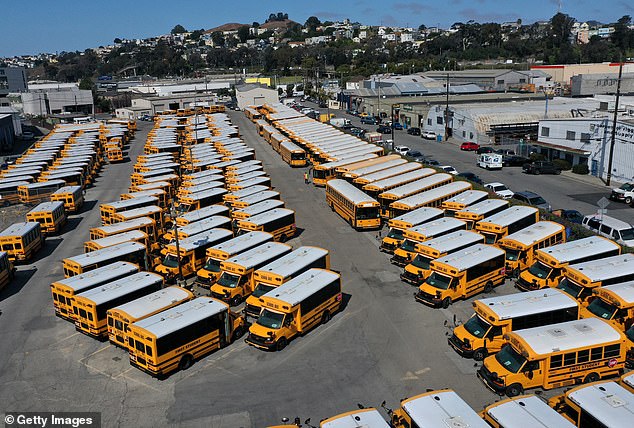 School buses in San Francisco, California remained parked as some of the state’s biggest districts have announced they’ll begin classes online instead of in-person as the state deals with an uptick in COVID-19 cases

The president added that schools being closed put a ‘tremendous strain’ on parents, but also said the issue was a ‘balancing act.’

Trump’s remarks were the latest in a string of comments from the president to get schools reopened, despite cases of the virus hitting record highs in nearly half the U.S. states.

The president also doesn’t have a lot of power to push schools to reopen, as those decisions are made at a state and local level.

He has, however, suggested he would withhold federal funds from schools to pressure districts to reopen.

‘In Germany, Denmark, Norway, Sweden and many other countries, SCHOOLS ARE OPEN WITH NO PROBLEMS. The Dems think it would be bad for them politically if U.S. schools open before the November Election, but is important for the children & families. May cut off funding if not open!’ the president threatened.

The only problem is that the president can’t pull back funding that Congress has already approved.

That issue was at the center of the president’s impeachment.

Trump was accused of holding up aid to Ukaine in order to pressure the country’s president to announce an investigation into his political rival Joe Biden and Biden’s son Hunter, who had business dealings in the country.

The president was acquitted by the Republican-led U.S. Senate in February.