Trump critics underestimate him ‘at their own peril’, Jen Psaki warns

Trump critics underestimate him ‘at their own peril’, Jen Psaki warns: Ex-Biden official says former president has ‘evil charisma’ that could help him win GOP 2024 nomination

Addressing Democrats and moderates on the right, the ex-White House official said Trump had an ‘evil charisma’ that could help him sail to the GOP nomination for a third time – and possibly win the presidency a second time.

The ex-president’s November 15 announcement at his Mar-a-Lago home received a lukewarm reception in the media and even within his own party, fueling speculation that his grasp on the GOP could be more vulnerable than previously thought.

But speaking on a Meet The Press panel this Sunday, Psaki suggested that those who count Trump out now do so to their own detriment.

‘I think Democrats and sane Republicans underestimate Trump at their own peril,’ Psaki said.

‘Because, in order for Trump not to win the nomination, there has to be a better alternative – that’s how primaries work, right?’

Former White House press secretary Jen Psaki warned ‘Democrats and sane Republicans’ not to ‘underestimate’ Donald Trump, noting that the GOP needs to agree on a ‘better alternative’ before he can be defeated

DeSantis, who recently won a commanding double-digit re-election victory after a tight first race in 2018, has seen his star rise within the GOP for his opposition to the Biden administration on COVID-19 and the border as well as culture war battles fought against the LGBTQ community.

He further ingratiated himself to the wider Republican sphere with his much-lauded handling of the back-to-back effects of Hurricane Ian and Tropical Storm Nicole.

The Florida governor has also run afoul of Trump for refusing to rule out a future 2024 challenge against him – though DeSantis has not formally stated any interest in running for president yet.

‘Ron DeSantis – this man, he’s either the savior or he’s currently at his peak,’ she explained. 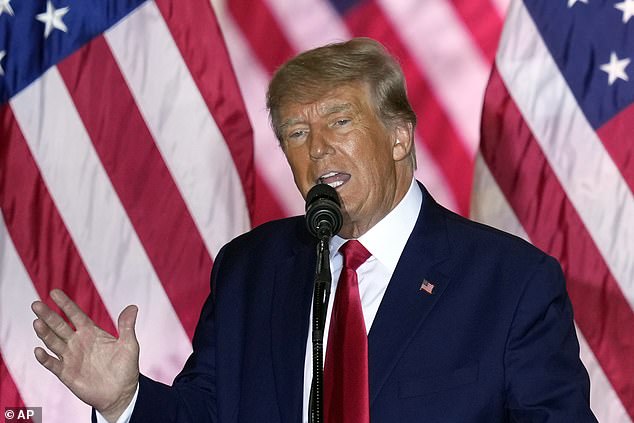 ‘Mike Pence, with all due respect, did not exactly light the world on fire politically before he was selected by Donald Trump to be his running mate.’

She questioned whether a clear ‘alternative’ would rise.

‘Trump has some evil charisma, that helps him win the nomination, the nomination process is long. What is going to happen here?’ Psaki argued.

‘My view is that people should not underestimate him.’

Both are nearly tied in favorability – a far climb for the governor, who won his 2018 race for the Tallahassee governor’s mansion with Trump’s emphatic endorsement.

But now, DeSantis is viewed favorably by 68 percent of Republicans compared to 67 percent who said the same about Trump.