Donald Trump’s impeachment defense lawyer Alan Dershowitz is walking back on his comments made four years ago where he described the president as a ‘destabilizing and unpredictable candidate’.

Dershowitz, 81, will argue on behalf of the president at the Senate trial this week, but before he addresses the court he is clearing the air on his prior comments bashing Trump.

In his 2016 book entitled Electile Dysfunction: A guide for Unaroused Voters he warned that Trump, then a presidential candidate, ‘openly embraces fringe conspiracy theories peddled by extremists’ and criticized him for insulting women, Latinos, and Muslims.

‘I was campaigning for Hillary Clinton at the time. I hadn’t really ever met President Trump and it was just typical campaign rhetoric,’ Dershowitz, a longtime Democrat, said in an interview with NBC News.

‘I would not repeat that characterization today having met him,’ he added. 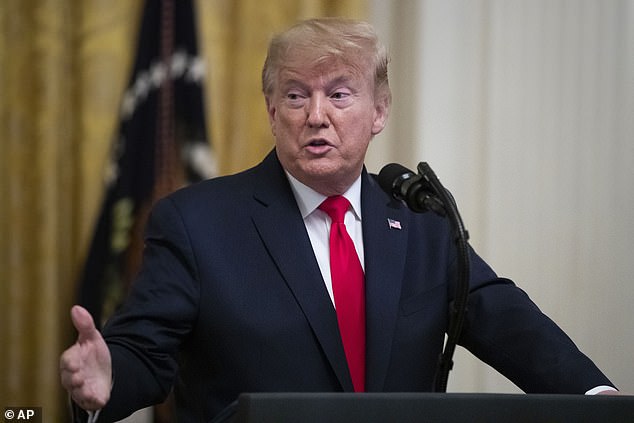 ‘I was campaigning for Hillary Clinton at the time. I hadn’t really ever met President Trump and it was just typical campaign rhetoric,’ Dershowitz, a longtime Democrat, said on his past anti-Trump comments. ‘I would not repeat that characterization today having met him’

However, Clinton campaign officials including Adrienne Elrod, who ran the 2016 campaign’s surrogate operation, said they don’t recall Dershowitz helping out with the campaign.

Dershowitz is a controversial big shot attorney who has represented O.J. Simpson, Claus von Bulow, and Mike Tyson in the past. 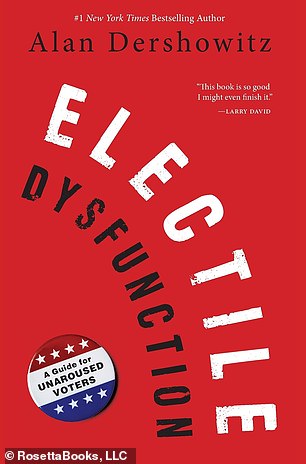 He ripped into Trump in his 2016 book describing him as a ‘destabilizing candidate who shoots from the hip and engages in personal vendettas (Trump) against a force for stability, who carefully measures her words and bases her actions (at least most of the time) on tested policies (Clinton).’

In his book he attacked Trump for his lack of political experience, his business practices and controversial views.

‘It may seem strange that the most successful populist candidate in modern history is a New York City multimillionaire who started his career as a landlord and who made his fortune on upscale real estate; has become famous for firing people; has exploited bankruptcy laws to hurt small-business owners, workers, and other creditors; has insulted large groups of people comprising a majority of voters (women, Latinos, the physically challenged, Muslims); has used vulgar words on TV that offend Christians, parents of young children, and family-oriented people of all backgrounds,’ Dershowitz said.

He warned that Trump would be dangerous in the White House in his foreign policy approach, which he predicted would violate international and domestic law.

‘What is clear is that Trump is prepared to violate existing international and domestic laws, as well as widely accepted principles of human rights, in his effort to stop terrorism,’ he wrote.

‘Even more disturbingly, Trump has sometimes lurched into the realm of dog-whistle anti-Semitism by half-heartedly courting the support of white-nationalist bigots,’ he added.

Now Dershowitz is singing a different tune and often appears on TV to defend the president’s actions in office. 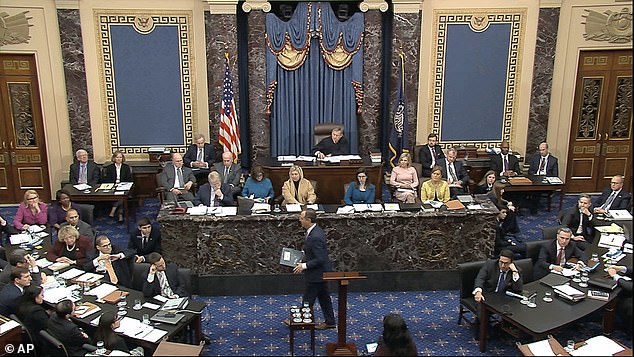 The Senate impeachment trial is underway. Dershowitz is expected to argue on Trump’s behalf early next week

In a recent opinion piece for the New York Times Dershowitz said he is defending Donald Trump on ‘principle’.

‘I have stood on principle, representing people with whom I disagree as well those with whom I agree. I have never made a distinction based on partisanship,’ Dershowitz said.

Dershowitz says Trump personally approached him after he was already brought onto the president’s legal team. The president stopped him in line at Mar-a-Lago’s Christmas Eve buffet last month and said, ‘Everybody wants to do this thing, but I want you,’ the attorney recalled to Associated Press.

Trump’s legal team starting presenting their defense arguments on Saturday at the third impeachment trial of an American president in history.

Dershowitz will argue that an impeachable offense requires criminal-like conduct, a point widely disputed among scholars.

He claims hes trying to prevent impeachment from being weaponized into a ‘partisan process’,  where any president can be removed over non-criminal abuses of power.

‘I’ve always taken positions that are principled and often unpopular and often in defense of people I don’t particularly support,’ Dershowitz said, citing his defense of Neo-Nazis who wanted the right to march through Skokie, Illinois.

Nancy Gertner, a retired federal judge in Boston who has known Dershowitz for years, says it’s true to an extent that he hasn’t changed – he still gravitates toward the media spotlight, high-profile cases and ‘positions he thinks will prove how principled he is.’

But she said the content of his statements has changed. She said it’s impossible to reconcile his statements on behalf of Trump, and his extraordinarily expansive view of presidential authorities, with the civil libertarian bent he’s expressed over the decades and his stated opposition to unchecked government power. 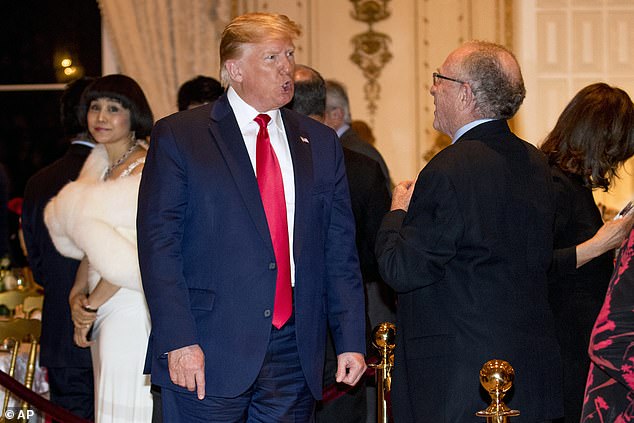 Dershowitz says Trump personally approached him after he was already brought onto the president’s legal team. The president stopped him in line at Mar-a-Lago’s Christmas Eve buffet last month and said, ‘Everybody wants to do this thing, but I want you,’ the attorney said. The pair pictured talking at that Christmas Eve dinner 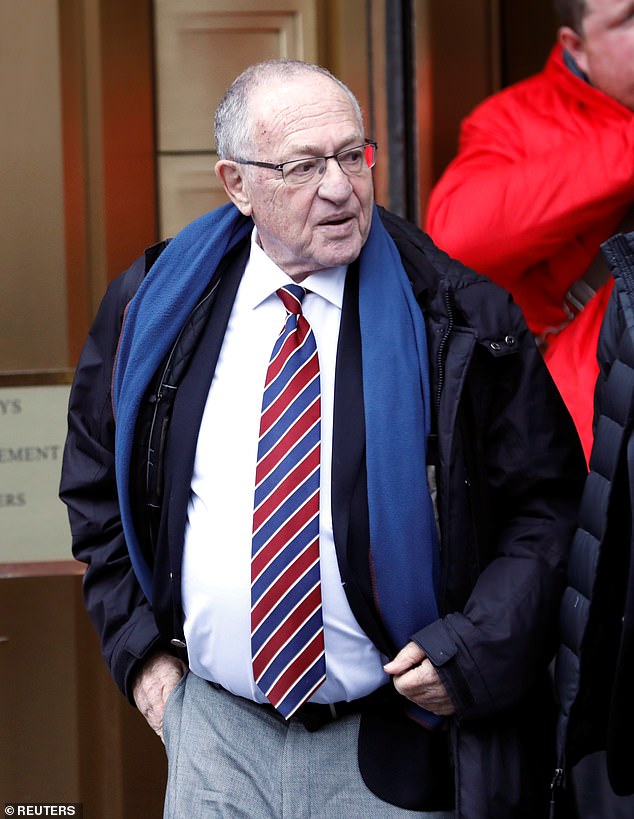 In his 2016 book Dershowitz slammed Trump as a multimillionaire who ‘became famous for firing people’ and criticized him for insulting women, Latinos, the physically challenged and Muslims

Some of what she’s heard him say is ‘horrifying.’

‘I’ve known him for a very long time. I’ve never seen anything like this,’ she added.

Harvey Silverglate, a friend of Dershowitz’s for more than 50 years, said his positions on Trump clearly make him unpopular ‘among the legal intelligentsia nationwide.’

But he said Dershowitz specializes in cases where the defense is difficult or unique, and the client unpopular.

Trump has watched Dershowitz defend him on Fox News for years now, sometimes tweeting links to the lawyer’s statements that he finds especially helpful. Through the Mueller investigation and into impeachment he has been enamored with the possibility of assembling a legal dream team.

But White House aides cautioned Trump against bringing Dershowitz onto his team, concerned that Dershowitz was a self-promoter whose showboating style wouldn’t put Trump’s interests first.

They also feared Dershowitz’s ties to Jeffrey Epstein and the surrounding legal drama would be a distraction for the defense. Trump overruled them.

Dershowitz said his wife was apprehensive to have him lead the case.

Trump sought to offer reassurance on that point, saying that while he appreciated that concern, it was nonetheless important to consider ‘how important this was for the future of the country and for precedent and all that,’ Dershowitz recalled.

Soon after, his participation was settled.

‘People have already said that my arguments will be bonkers or errant nonsense,’ Dershowitz said. ‘My only point is: Listen. I’m going to lay out a very serious constitutional argument. Maybe you’ll agree with it or maybe you won’t, but let’s have a debate on the merits.’