Donald Trump broke his silence on Thursday about an MSNBC host who apologized after accusing him of enlisting the help of Russian oligarchs to borrow untold millions from Deutsche Bank. Lawrence O’Donnell retracted Tuesday night’s bombshell report on Wednesday after the president’s personal lawyer threatened to sue the network.

‘Crazy Lawrence O’Donnell, who has been calling me wrong from even before I announced my run for the Presidency, even being previously forced by NBC to apologize, which he did while crying, for things he said about me & The Apprentice, was again forced to apologize,’ Trump tweeted, ‘this time for the most ridiculous claim of all, that Russia, Russia, Russia, or Russian oligarchs, co-signed loan documents for me, a guarantee.’

‘Totally false, as is virtually everything else he, and much of the rest of the LameStream Media, has said about me for years. ALL APOLOGIZE!’ he added.

‘LameStream media’ is a play on the phrase ‘mainstream media.’ Former Alaska Gov. Sarah Palin popularized it a decade ago while running for vice president, as shorthand for what she and other conservatives saw as unfair treatment by TV networks and long-established newspaper brands.

The president’s claim that O’Donnell has apologized to him in the past likely refers to a 2015 episode in which the host said he was sorry for starting a feud over Trump’s salary from ‘The Apprentice,’ his former NBC reality TV show.

Footage from that broadcast on July 16, 2015 does not show him shedding any tears.

President Donald Trump, pictured Sunday during the G7 summit in France, lashed out at Lawrence O’Donnell on Thursday after the MSNBC host retracted a story that claimed he enlisted the help of Russian billionaires to borrow money from Deutsche Bank 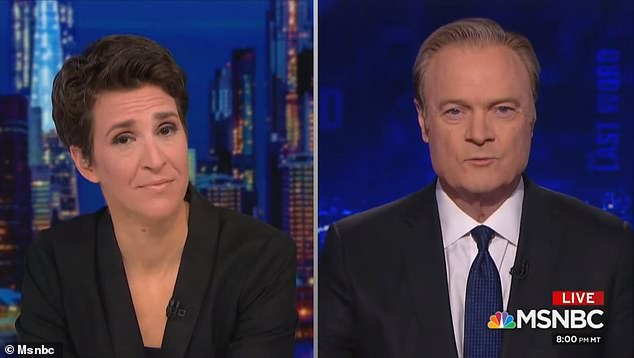 The president’s son Eric said Wednesday night that the Trump Organization, where he is executive vice president, ‘will be taking legal action’ despite O’Donnell’s televised walk-back.

‘This was a reckless attempt to slander our family and smear a great company. Apologies are not enough when the true intent was solely to damage and cause harm,’ Eric Trump wrote in a tweet.

‘As a company, we will be taking legal action. This unethical behavior has to stop,’ he continued.

As of Thursday morning O’Donnell had not deleted the tweet in which he first announced the news report he later retracted.

During Wednesday night’s broadcast of his show ‘The Last Word,’ he said the previous night’s report ‘wasn’t ready for reporting’ and did not ‘go through the rigorous verification and standards process’ of his network.

‘Had it gone through that process, I would not have been permitted to report it,’ he said.

‘Tonight we are retracting the story,’ O’Donnell continued. ‘We don’t know whether the information is inaccurate, but the fact is, we do know it wasn’t ready for broadcast. For that, I apologize.’

The president claimed Thursday on Twitter that the liberal MSNBC host’s mistake is similar to a long string of errors he has endured while running for office and serving in the White House.

‘The totally inaccurate reporting by Lawrence O’Donnell, for which he has been forced by NBC to apologize, is NO DIFFERENT than the horrible, corrupt and fraudulent Fake News that I (and many millions of GREAT supporters) have had to put up with for years. So bad for the USA!’ he wrote.

O’Donnell teased his news shocker Tuesday night at the end of Rachel Maddow’s hour of programming, inspiring a torrent of anti-Trump tweets that included the hashtag #RussianCosigners – which quickly rose to #2 on Twitter’s ‘trending’ chart in the United States. 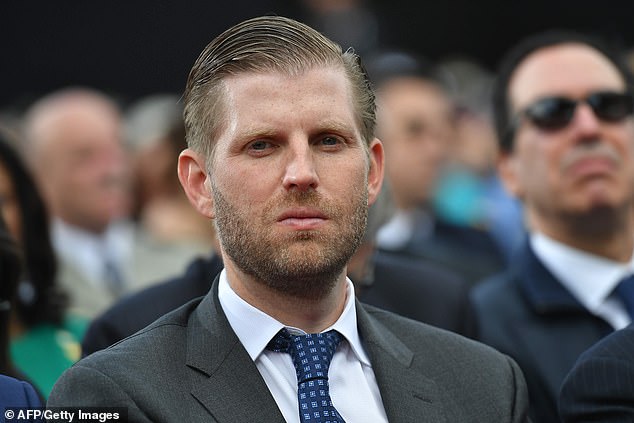 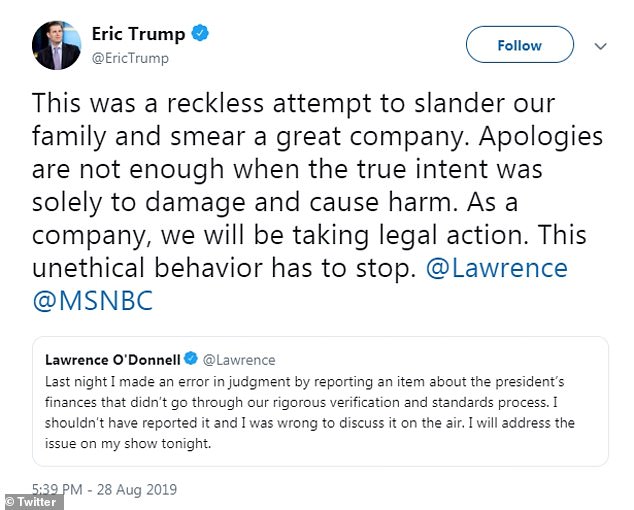 The president’s son, who is the Trump Organization’s executive vice president, said MSNBC’s ‘unethical behavior’ would have real consequences 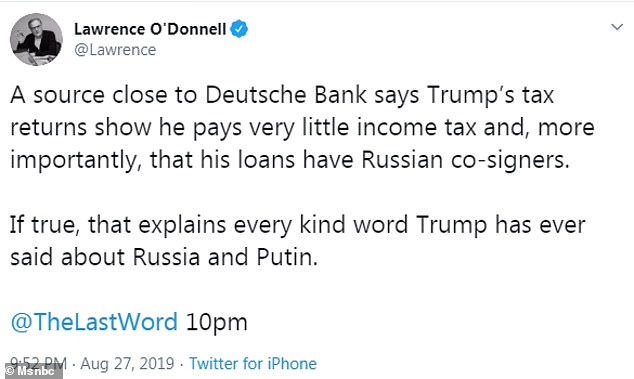 Despite O’Donnell’s apology and retraction, this tweet – which started the entire episode – was still on his timeline as of Thursday morning

He claimed a single source had told him information that ‘goes a few very important steps beyond’ information that was publicly available about Trump’s lending history with the German bank.

O’Donnell cast that apparent blockbuster in a political light after Maddow gasped ‘What? Really?’

‘If true,’ he said, ‘that would explain every kind word Donald Trump has ever said about Russia and Vladimir Putin.’

The host of ‘The Last Word’ teased his revelation with a tweet that quickly went viral. But he was hedging by the end of his hour-long program.

‘Now, I want to stress, that’s a single source,’ he said. ‘This has not been confirmed by NBC News. I have not seen any documentation from Deutsche Bank that supports this and verifies this. This is just a single source who has revealed that to me. And that’s where that stands at this point. It’s going to need a lot more verification before that can be a confirmable fact.’

‘The information came from a single source who has not seen the bank records. NBC has not seen those records and has not yet been able to verify the reporting.’

Donald Trump Jr. tweeted sarcastically that the network’s inability to confirm O’Donnell’s report is ‘likely because he totally fabricated it.’

Harder wrote that there are no co-signers on Trump’s Deutsche Bank loans.

‘The only borrowers under these loans are Trump entities, and Mr. Trump is the only guarantor,’ he declared. ‘Numerous documents for each of these loans are also recorded, publicly available and searchable online.’

‘Thus, actual malice can easily be proven based on your reckless disregard of the truth and unreasonable reliance on an alleged “source” who you will not even identify in your story and likely is seeking to mislead you and the public for political reasons or other ulterior motives.’

‘Actual malice’ is a legal standard that applies to public figures who want to argue that they have been libeled or slandered. It requires proving that a defendant was reckless and published a lie despite knowing, or being expected to know, that it was false.