Cain, at age 74, was pronounced dead Thursday after spending nearly a month in an Atlanta-area hospital fighting the coronavirus.

The former GOP presidential candidate tested positive for COVID-19 nine days after appearing at Trump’s June 20 Tulsa, Oklahoma rally, where he was photographed sitting in tight confines, without wearing a mask.

President Donald Trump answered outside the White House Friday ‘I don’t think he did,’ when asked if former GOP presidential candidate Herman Cain, who died Thursday, had contracted the coronavirus that killed him at Trump’s June 20 Tulsa rally 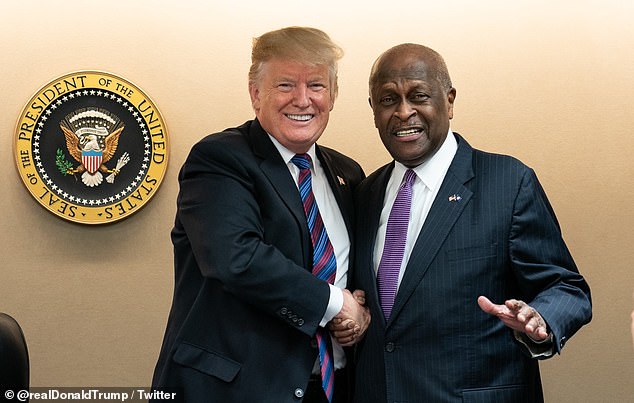 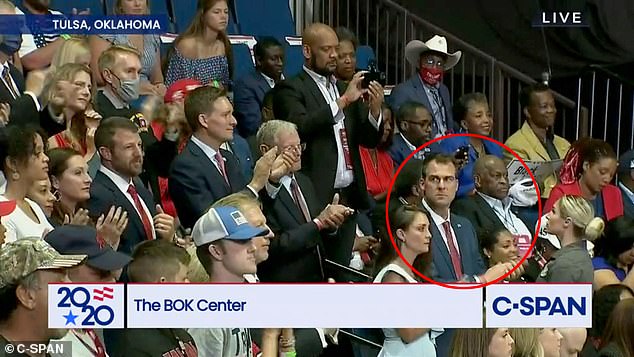 Oklahoma Gov. Kevin Stitt was seated near Hermain Cain at the June 20 rally in Tulsa. Stitt announced he had tested positive for COVID-19 in mid-July, so was less likely to have been infected directly from the rally, but Cain’s positive test came back nine days later

June 20: Herman Cain attend’s President Donald Trump’s Tulsa rally and posts a photo of himself not wearing a mask

July 1: Cain is taken to the hospital by ambulance for COVID-19

July 27: Aides tweet that he is being treated with ‘oxygen for his lungs’ but ‘his other organs and systems are strong’

Cain was seated near Oklahoma Gov. Kevin Stitt who later tested positive for the coronavirus.

Stitt said he didn’t believe he contracted COVID-19 at the rally because he tested positive in mid-July.

‘I don’t think there was any way it was at the president’s rally. It’s too long ago,’ Stitt said.

Cain tested positive within the timeframe that made it more likely he was infected at the rally.

His staff said in a statement there is ‘no way to know for sure how or where Mr. Cain contracted the coronavirus.’

As well as announcing his death, Cain’s staff deleted a tweet sent on the day he entered the hospital praising South Dakota for not mandating masks at Trump’s Mt. Rushmore address before July 4 saying: ‘PEOPLE ARE FED UP!’

He was hospitalized on July 1.

At 74, Cain was in the high-risk group for the virus because of his age.

He’s also a cancer survivor – in 2006, Cain had a diagnosis of stage 4 colon cancer, which also had spread to his liver.

Trump talked about Cain at the top of his Thursday press briefing, blaming the ‘China virus’ for taking his friend.

He did now acknowledge how Cain might have caught the virus.

He also tweeted a tribute to Cain, including a picture of the two Republicans inside the Situation Room.

Cain made a White House visit in spring 2019 during the time period Trump wanted to nominate him to the Federal Reserve’s board of governors. Cain ultimately pulled out of the nomination process.

The former Godfather’s Pizza CEO became a household name in the run-up to the 2012 Republican primary, though his bid was derailed by past accusations of sexual harassment. An ex-mistress also came forward. He pulled out of the race before voters ever went to the ballots.

Herman Cain died of COVID-19. He attended President Trump’s June 20th rally in Tulsa, where he tweeted the above photo 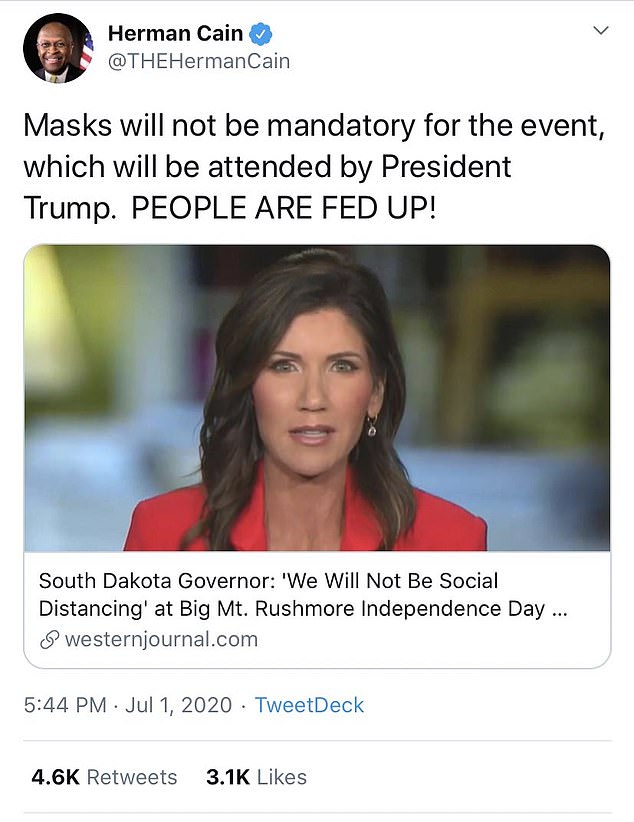 On July 1, the same day Herman Cain was taken by ambulance to the hospital as his breathing worsened, he put out a tweet complimenting South Dakota Gov. Kristi Noem for not making social distancing and mask-wearing mandatory at Trump’s July 3 appearance in her state

His death triggered a number of politicized reactions because he had attended Trump’s disastrous rally, which was ill-attended likely due to COVID concerns.

At a hearing with Dr. Anthony Fauci and other top government health experts Friday, Democratic Rep. Maxine Waters wished her condolences to Cain’s family before chastising the GOP pol’s behavior.

‘This virus is not Democrat or Republican,’ Waters said at the hearing.

‘I’m going to send my condolences to the family of Herman Cain who was a presidential candidate, who was a good friend of the president, who happened to have been at the rally in Tulsa June 20th, with no mask on, with a group of people around him with no masks on, and he’s dead. He died.’

Waters assumed, with no definitive proof, that Trump’s rally is where Cain was infected.

‘I’m told that he was in good health and that he, of course, contacted the virus as a result of his attendance without a mask there,’ she said.

‘So my condolences to his family,’ the California Democrat added.