Trump didn’t disclose a $19.8 MILLION loan from company with ties to North Korea when he was running for president in 2016, damning report claims

Former President Donald Trump didn’t disclose a $19.8 million loan from a company linked to North Korea when he was running for the White House in 2016.

In the mid 1990s, Daewoo was the only South Korean firm able to do business inside  North Korea, Forbes pointed out.

Daewoo and Trump got into business together in 1997, when the Korean firm signed on as a partner in the construction of Trump World Tower, the Trump-branded skyscraper adjacent to the United Nations campus in New York.

They continued the partnership from 1999 to 2007, with Daewoo using the Trump name on six properties constructed in South Korea.

Former President Donald Trump didn’t disclose a $19.8 million loan from a company linked to North Korea when he was running for the White House in 2016, Forbes reported Sunday

At some point in the business relationship, Daewoo became a creditor for the Trump Organization, Forbes reported, with the now ex-president’s business starting with a loan of $25 million for projects in Saint Vincent, the Grenadines, Brazil, Florida, Arizona, Canada and Chicago.

The rest was paid off shortly after that, Forbes said.

The debt was not reported on disclosure forms that Trump filled out with the Office of Government Ethics while he was a candidate in 2016 and as president in 2017.

The move wasn’t necessarily illegal because the government only requires the listing of personal debt – and loans to an individual’s company if they’re personally liable for them. 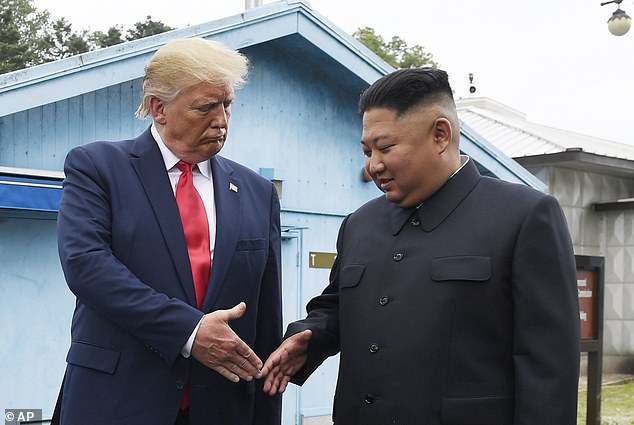 Trump (left) has been vocal about pushing to have a good relationship with the rogue nation of North Korea during his time in office. He’s photographed meeting with Kim Jong Un (right) in the DMZ in June 2019

A spokesperson for Trump didn’t respond to DailyMail.com’s request for comment.

Trump has been vocal about pushing to have a good relationship with the rogue nation of North Korea during his time in office.

He thrice met with North Korean leader Kim Jong Un during his four-year term, including a historic meeting in the DMZ, or demilitarized zone, between North and South Korea.

The disappearance of some of those letters after Trump left office kicked off the National Archives and later Justice Department probe that led to the FBI’s raid of Mar-a-Lago in August.