Trump projected coolness as he walked on to the stage in the Costa Salguero Centre for the G20 ‘family photo’ – the time when the leaders gather on stage for a group picture – passing each man but not speaking to either of them.

The president’s indifference aside, Putin and the prince greeted each other enthusiastically, smiling broadly and exchanging a high-five. 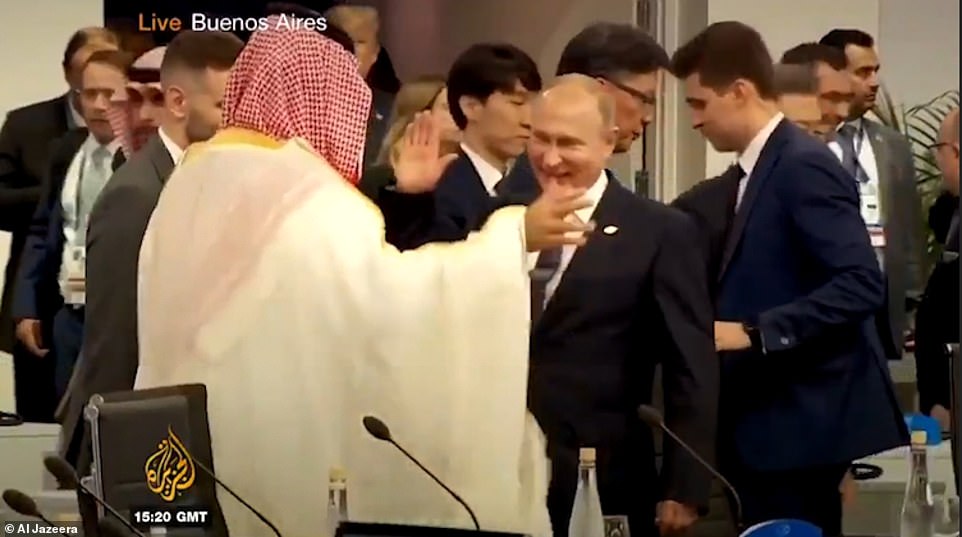 Trump’s diplomatic discretion comes amid questions about will he or won’t he meet with either leader – both of whom are in international scandals of their own making.

A White House official said the president and the prince did speak.

‘They exchanged pleasantries at the leaders session,’ a senior White House official said on background.

Asked just now at a pool spray what they discussed, the president said the two did not talk. ‘We had no discussion. We might, but we had none,’ he said.

He’s met with autocrats before but he’s faced criticism for his willingness to speak with Putin and the prince at the summit, which comes as the president faces political problems back home in the wake of a new guilty plea from his former personal attorney Michael Cohen.

Trump cancelled his meeting with Putin on his way down to Buenos Aires. Before he arrived in Argentina, he said he’d be willing to talk with the prince if it was on his schedule yet he didn’t acknowledge him Friday.

Putin and MBS – the crown prince is known by his initials – are in the international dog house: Putin for Russia’s seizure of three Ukrainian vessels; MBS for ordering the murder of Washington Post journalist Jamal Khashoggi.

The two men were seated next to one another at the luncheon following the leaders’ ‘family’ photo.

That’s where their high-five took place, happening as Trump is seen entering the lunch behind them.

The warm welcome comes as Kremlin spokesman Dmitry Peskov said this afternoon that a visit by President Putin to Saudi Arabia is being prepared, although the timing of visit has not yet been finalized. 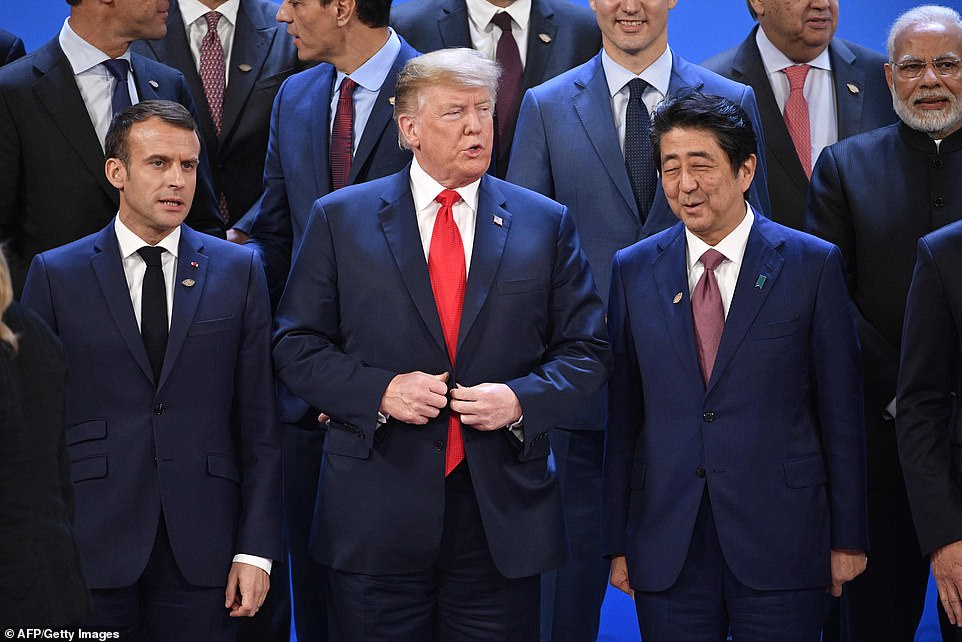 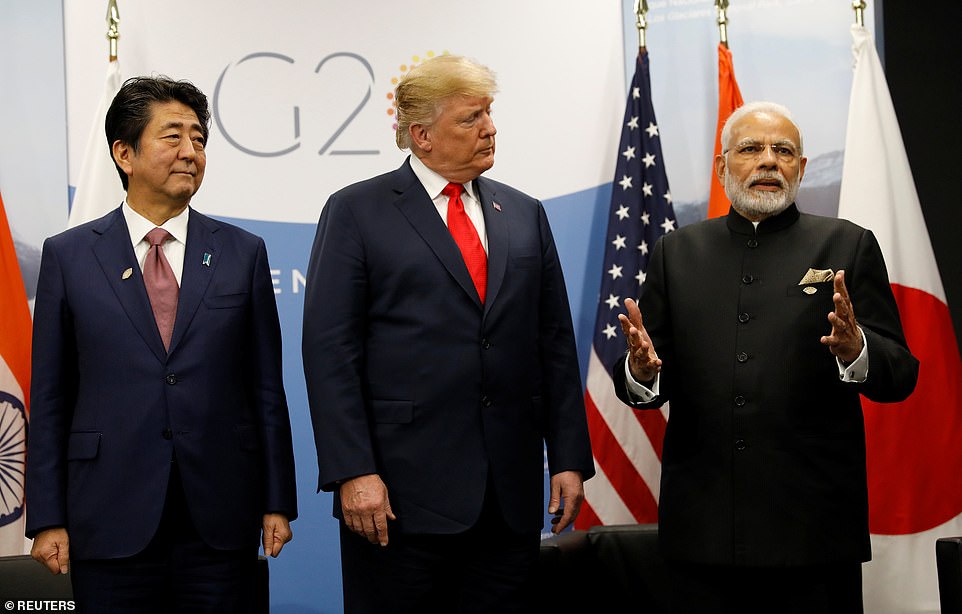 It comes as Salman – who had been courting western leaders with promises of human rights reforms in Saudi Arabia – was grilled by the likes of French President Emmanuel Macron over Kashoggi’s murder in Istanbul.

The journalist was murdered by a hit squad in Istanbul on October 2. Saudi authorities have denied Prince Mohammed ordered the hit but the CIA is said to be claiming that the order came from the top.

Earlier, Putin used a speech to the summit to denounce Western nations’ ‘vicious’ use of sanctions against Russia over Ukraine, election interference and the poisoning of Sergei Skripal in England.

The speech was also a veiled swipe at PresidentTrump, who advocates an ‘America First’ policy on trade and cancelled his scheduled sit down with his Russian counterpart. 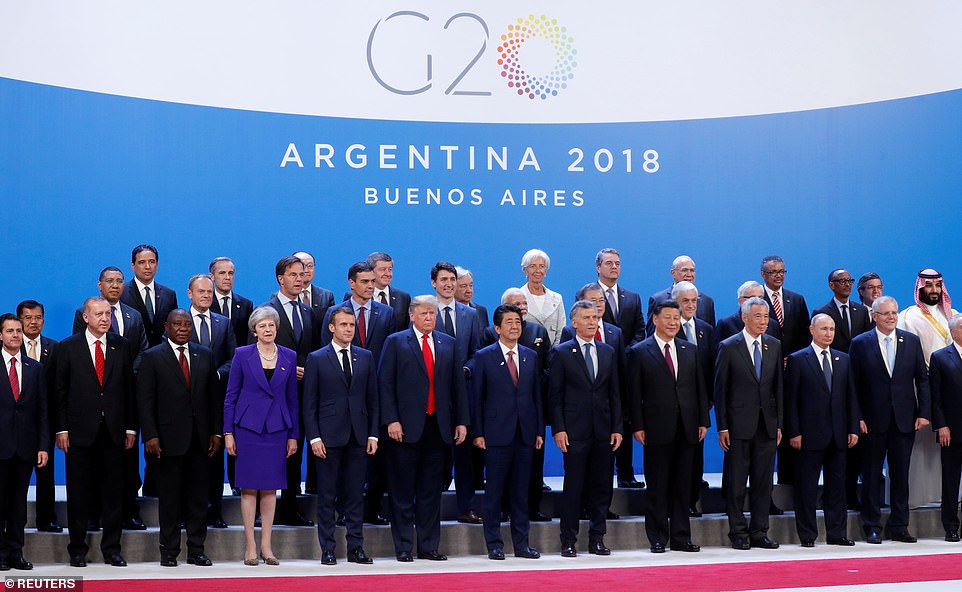 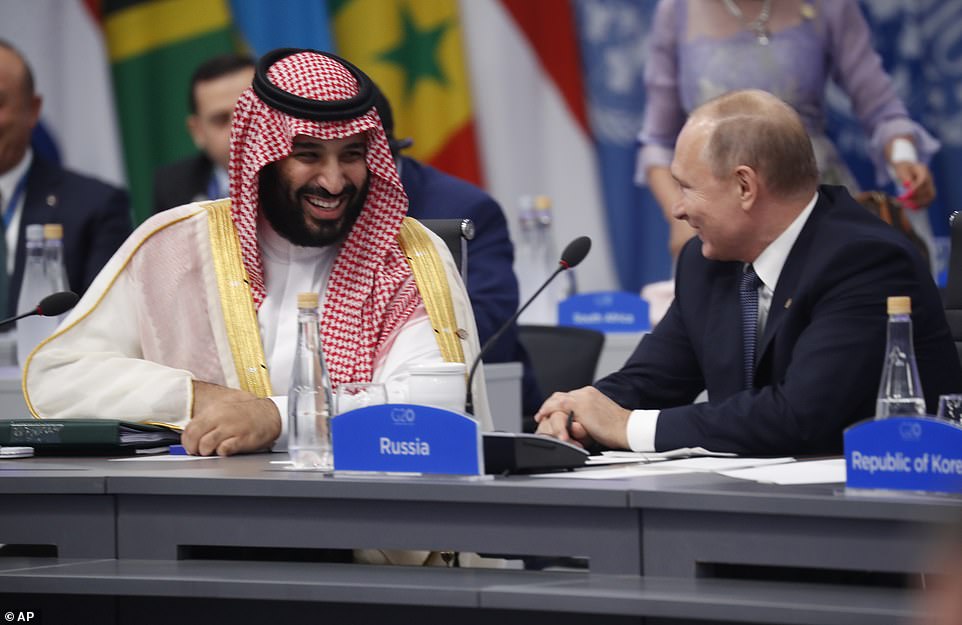 His slamming of Trump comes as the Kremlin told Reuters the president will speak with the Russian leader after all – a story the White House scrambled to denounce.

‘I doubt that this move will be conducive to the resolution of a whole host of important international problems. But love can’t be forced, of course,’ Lavrov said in an interview with Russian state TV, according to the Interfax news agency.

She made the notable attack on the special counsel amid speculation that the president pulled out of his planned meeting with Putin in part due to blowback from the stunning guilty plea by his former lawyer Michael Cohen to an additional charge. 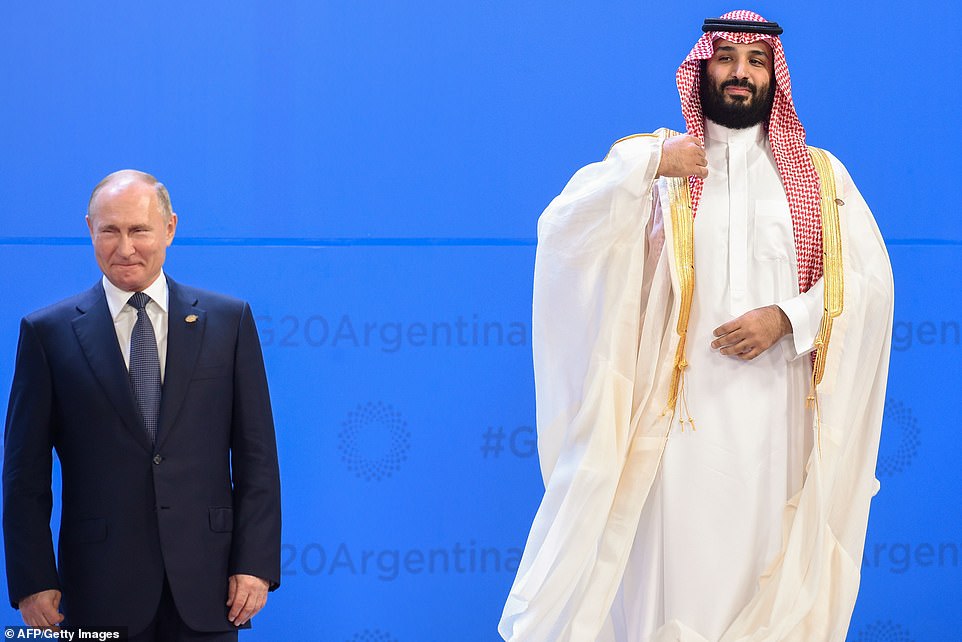 Putin and MBS get in place for the ‘family’ photo 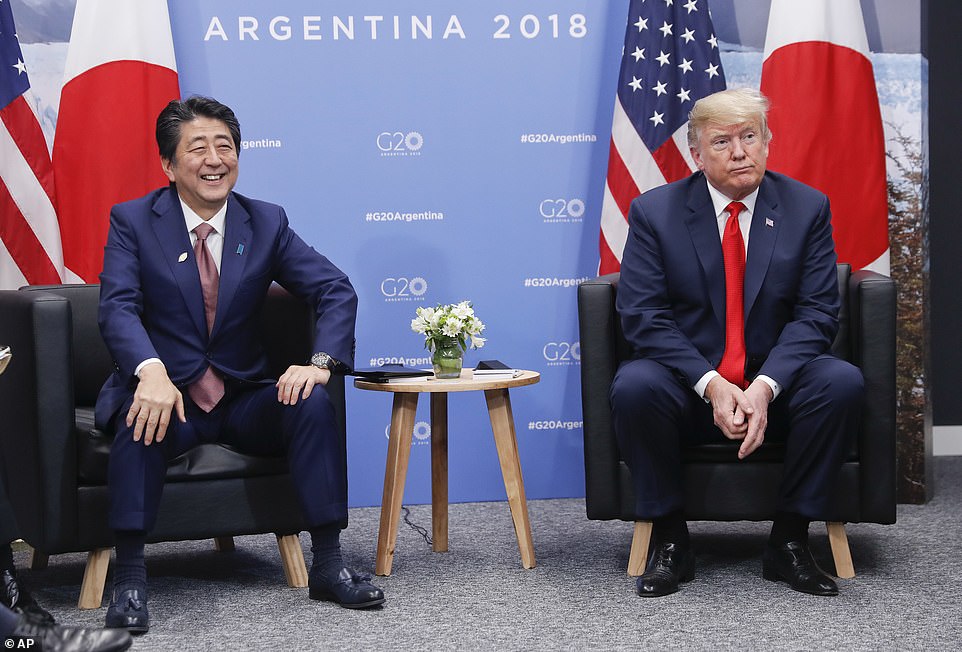 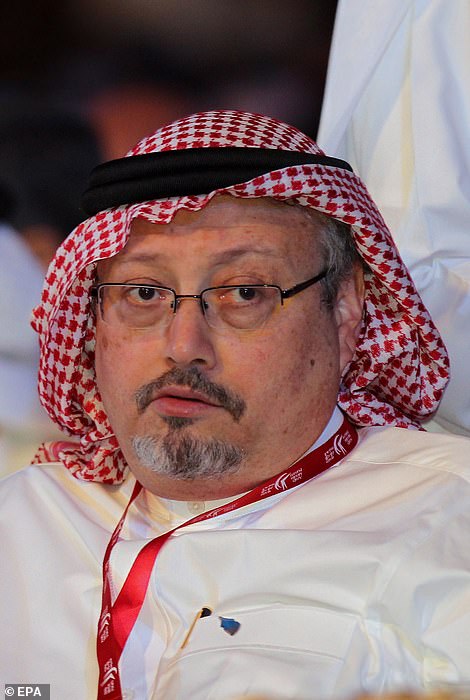 ‘The Russian Witch Hunt Hoax, which is hopefully now nearing an end, is doing very well. Unfortunately, it probably does undermine our relationship with Russia. However, the reason for our canceled meeting is Ukraine. Hopefully, that will be resolved soon so that productive conversations can begin,’ Sanders said.

And a White House official confirmed there will be no ‘pull aside’ – State Department term for informal, unscheduled talks between world leaders that can happen at summits – between Trump and Putin.

But there will be plenty of opportunities for the two men to bump into each other over the next two days, including Friday night’s cultural event and dinner for leaders at the Teatro Colon.

The president, during a bilateral meeting Japanese Prime Minister Shinzo Abe, told the press his meeting with Putin was cancelled because of Russia’s actions against the Ukraine.

‘We don’t like what happened. We don’t like that,’ he said, adding ‘the basis with what took place in respect to the ships… that is the sole reason’ for the cancellation.

The president, thus far, has stood firm in ignoring the controversial world leaders

Trump stood between French President Emanuel Macron and Abe for the ‘family’ photo, which lasted about five minutes.

The president was one of the last leaders to come on stage to take his spot in the lineup, minimizing the opportunity leaders had to speak with him.

He walked past MBS and Putin to take his spot in the line up.

While he waited for the cue from the cameras, Trump chatted with Abe, with whom he has a close relationship. 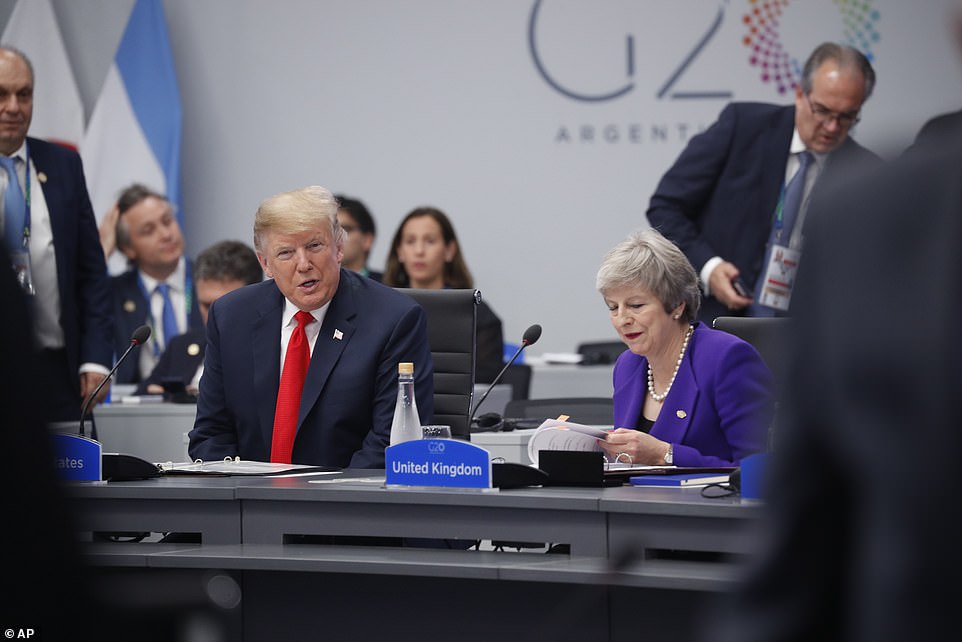 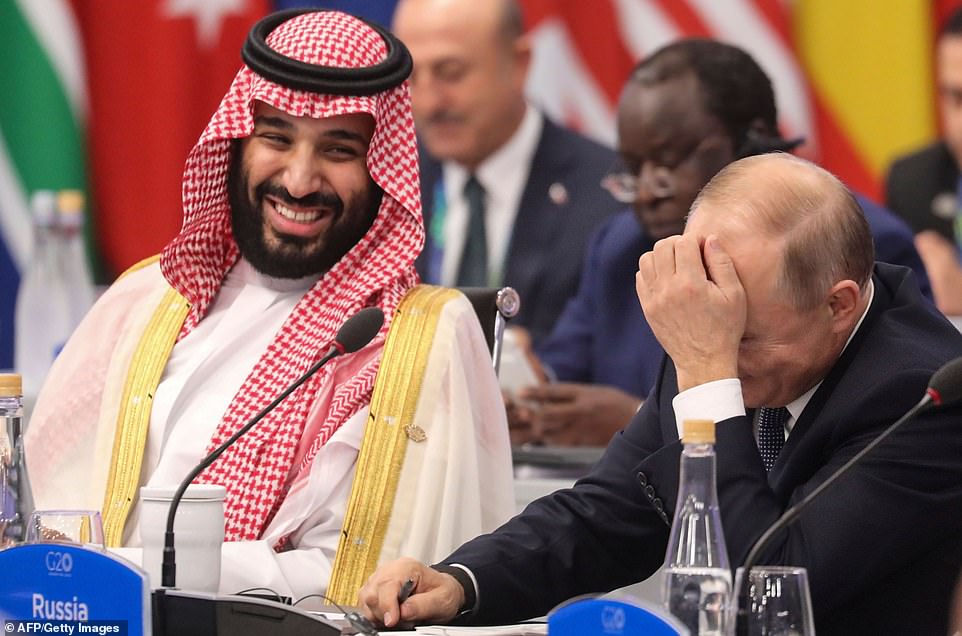 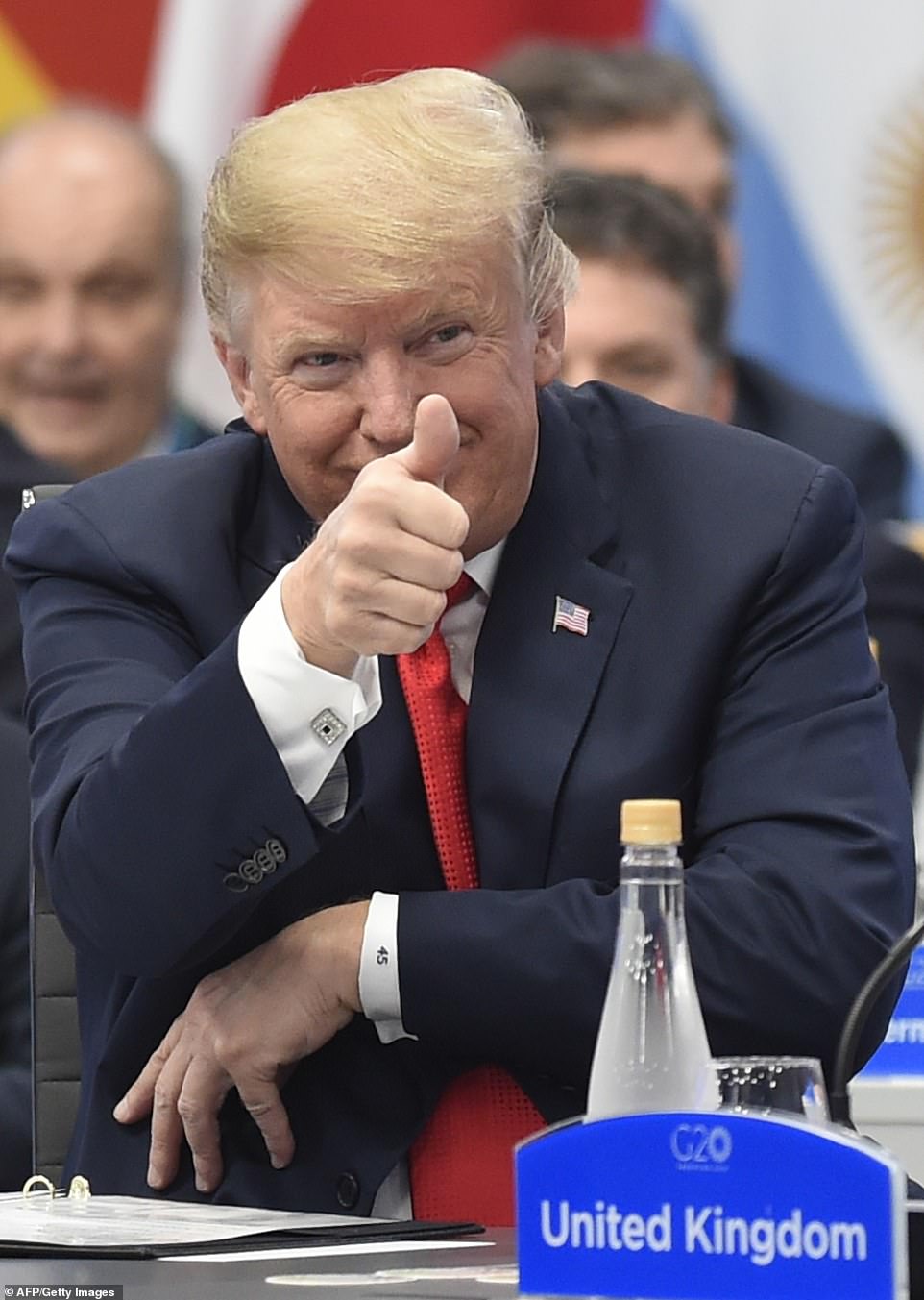 Before the family photo, each leader came out one by one to shake hands with Argentina President Mauricio Macri – the host leader – and get a photo with him.

Then they all returned to the stage for the group picture.

After the ‘family’ photo, the leaders moved into a separate room for lunch, where they all sat around a round table, each of them with screens and microphones in front of them.

Flags lined the wall in the back and desks were set up behind the leaders for other top officials. Secretary of State Pompeo sat behind the president.

Trump sat two seats away from President Macri with British Prime Minister Theresa May to his left and a German official, sitting in for a missing Chancellor Angela Merkel, to his right. (Merkel’s arrival was delayed by plane trouble but she is in route to Argentina).