US President Donald Trump yesterday flatly ruled out another lockdown if America gets hit by a second wave of coronavirus infections in the winter.

Answering press questions during a tour of the Ford factory in Michigan, Trump said ‘we are not closing our country’ when asked whether another peak of the virus at the end of the year could force the US in to a second lockdown.

‘We are going to put out the fires. We’re not going to close the country.’ 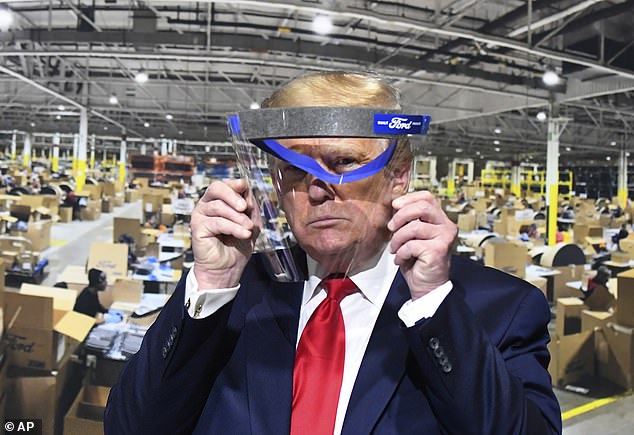 President Donald Trump looks through a face shield, in front of a poster of the manufacturing of the shields, while touring Ford Motor Co.’s Rawsonville Components Plant in Ypsilanti, Michigan yesterday

‘We can put out the fires. Whether it is an ember or a flame, we are going to put it out. But we are not closing our country,’ he added.

Trump’s comments came during a tour of the Ford factory in Ypsilanti, which is producing ventilator parts. He didn’t wear a face mask despite it being a state requirement.

The nature of the second wave likely to hit the US has been disputed by leading experts, with some predicting another peak in fall and winter – flu season – while others predict a series of acute eruptions of the virus in communities throughout the country which will be impossible to predict.

In an email to the New York Times, Dr Anthony Fauci said his main intention was to get across ‘the danger of trying to open the country prematurely.’ 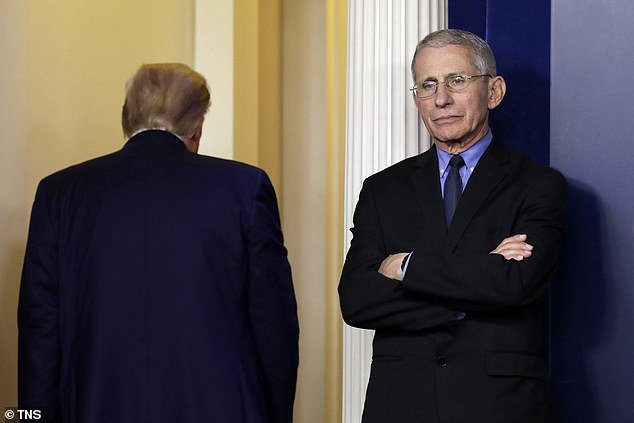 Dr. Anthony Fauci, pictured in March, has warned against states opening too quickly, fearing they could spark a second wave of infections

Dr Fauci, the director of the National Institute of Allergy and Infectious Diseases and a leading member of the White House coronavirus task force, fears ‘the danger of multiple outbreaks throughout the country’ if states ‘skip over’ their reopening guidelines.

‘This will not only result in needless suffering and death, but would actually set us back on our quest to return to normal,’ he said.

Trump has pushed for states to reopen as part of his effort to jump start the troubled economy and against the advice of health experts.

All 50 US states have started the phased reopening process. Today, Alaska announced it would be skipping over phases three and four and scrapping lockdown, with businesses allowed to operate at 100 per cent capacity. 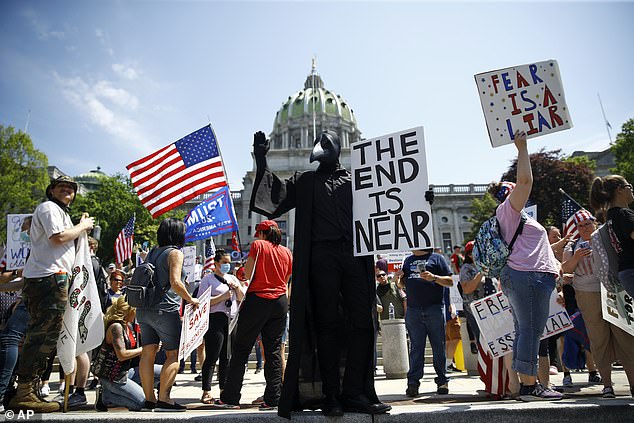 Protesters demonstrate during a rally against Pennsylvania’s coronavirus stay-at-home order at the state Capitol in Harrisburg, Pa., Friday, May 15, 2020. Trump blasted Democratic Gov. Tom Wolf of Pennsylvania during his visit to a factory in Allentown last week, pushing for the crucial state in his reelection campaign to reopen

The president has been critical of those states who are slow to open, accusing some Democratic governors of playing politics.

Trump has based his 2020 reelection bid on a strong economy and wants businesses to reopen their doors after being shuttered by the virus, which has infected more than 1.6 million Americans and killed over 90,000. Among the economic effects, 36 million people have lost jobs as unemployment hit levels that haven’t been seen since the Great Depression.

Trump blasted Democratic Gov. Tom Wolf of Pennsylvania during his visit to a factory in Allentown, Pennsylvania, last week.

‘You have to get your governor of Pennsylvania to start opening up a little bit. There are areas of Pennsylvania barely effected and they want to keep them closed. You can’t do that,’ he said.

The president has pushed for Pennsylvania – a state crucial to his re-election – to reopen.

‘The great people of Pennsylvania want their freedom now, and they are fully aware of what that entails,’ he wrote on Twitter on Monday.

Wolf, in return, called those pushing to restart the economy ‘selfish and unsafe.’