Trump goes after NFL players who kneeled at Sunday’s games

President Donald Trump chided the NFL this morning over the number of players who took a knee during the national anthem at Sunday’s games.

Nearly 24 players players protested around the league on Sunday, setting up another showdown with the president, who signaled this morning that he will not back down. 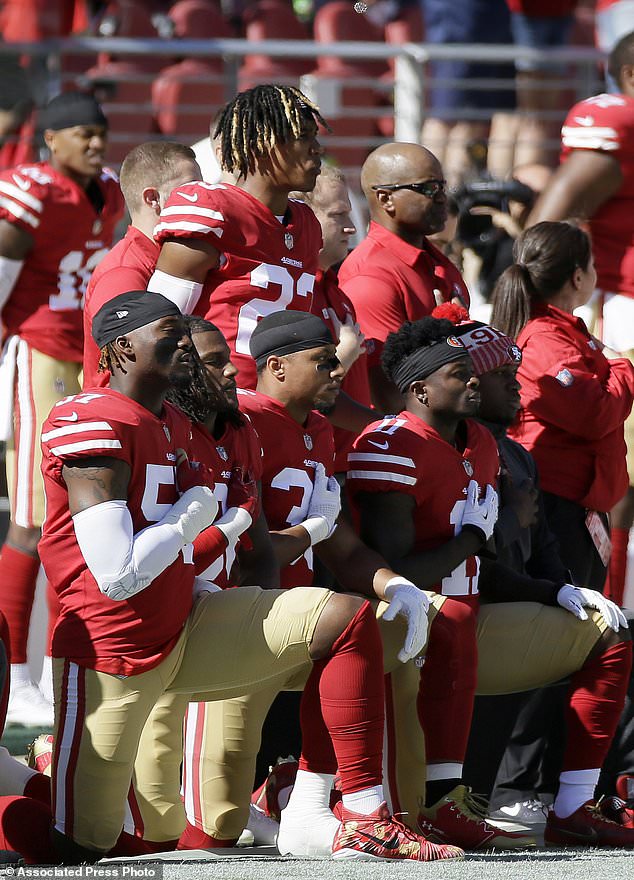 San Francisco 49ers players kneel during the performance of the national anthem before an NFL football game between the 49ers and the Dallas Cowboys in Santa Clara, California on Sunday, Oct. 22

Nearly 24 players players protested around the league on Sunday, setting up another showdown with the president, who signaled this morning that he will not back down

Associated Press journalists counted 22 players protesting during the anthems in some way before day games. Some took a knee, others sat on the bench, stayed in the tunnel or raised a fist.

On Sept. 25, days after President Donald Trump said players should be fired for protesting during the anthem, more than 200 players protested.

On Sunday, the Seahawks and 49ers had the most protesters. Seattle defensive end Michael Bennett and seven Seahawks teammates did not stand during the anthem before their game with the New York Giants.

Another teammate stood with his left arm on Bennett’s back. One Seattle player kneeled.

All the Dallas Cowboys stood, but defensive tackle David Irving raised his fist after the anthem ended.

‘I know that he was very deliberate during the anthem, and of course that’s the issue with me,’ said Cowboys owner Jerry Jones, who had threatened to bench players who protested the anthem. ‘I’m very proud of the way they all handled themselves.’ 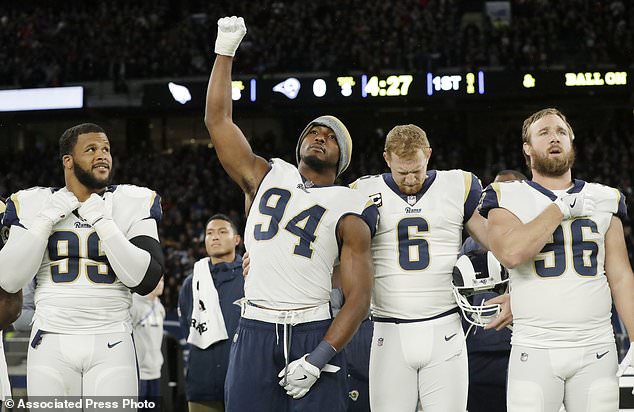 Los Angeles Rams outside linebacker Robert Quinn (94) raises his fist in the air during the playing of the U.S. national anthem before an NFL football game against Arizona Cardinals at Twickenham Stadium, in London on Sunday 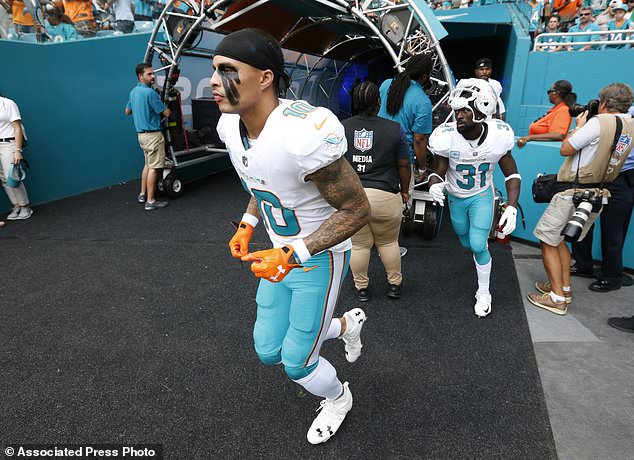 Most of the Indianapolis Colts locked arms before kickoff at home against the Jacksonville Jaguars. In Miami, Dolphins wide receiver Kenny Stills (front, 10), free safety Michael Thomas (right, 31) and tight end Julius Thomas (89) all stayed in the locker room during the anthem 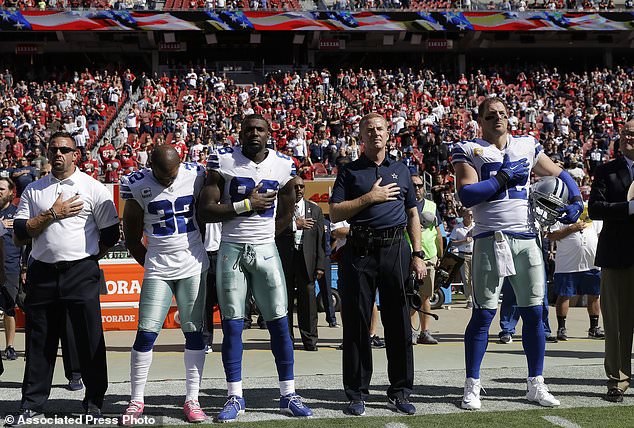 In Cleveland, Titans wide receiver Rishard Matthews stayed inside the tunnel during the national anthem.

A group of 11 owners and more than a dozen players met for more than two hours Tuesday at the league’s headquarters. Among the topics discussed was enhancing the players’ platforms for speaking out on social issues. The NFL’s policy on the national anthem was not changed.

Just one player appeared to protest visibly during the early games Sunday, with Rams linebacker Robert Quinn raising his fist during the U.S. anthem, then bringing it down before ‘God Save The Queen’ before playing Arizona in London.

Commissioner Roger Goodell and several owners said Wednesday that changing the language from ‘should stand’ to ‘must stand’ was not discussed at the league’s fall meetings.

Jones said he is concerned about how the protests are affecting the league’s business.

‘There’s no question that the league is suffering negative things from these protests,’ Jones said. ‘I’m first and foremost a proponent of making the league strong and make us have as many people watching the game as we can. … Let’s not do it in a way that tears down the strength of the NFL.’

Most of the Indianapolis Colts locked arms before kickoff at home against the Jacksonville Jaguars. In Miami, Kenny Stills, Michael Thomas and Julius Thomas all stayed in the locker room during the anthem.