Donald Trump goes on a 10-minute rant about THAT West Point ramp walk: President says it was like an ‘ice-skating rink’, he was tired from saluting ‘600 times’ and proves he can drink a glass of water to huge cheers from his rally crowd

Donald Trump has given a long-winded and rambling account of his behavior last weekend when he struggled to hold a glass of water with one hand and was seen shuffling down a ramp, leading to speculation he had Parkinson’s.

Speaking at a rally in Tulsa, Oklahoma – the first rally since the coronavirus pandemic broke out – Trump recounted last weekend’s scene for 10 minutes.

He revealed that he was alerted to the online uproar by his wife, Melania.

‘She said: “They mention the fact that you may have Parkinson’s disease,”‘ he told the crowd.

Donald Trump said on Saturday night that his struggles at West Point a week ago were due to his slippery shoes. He said he had leather-soled shoes, like the ones he was wearing in Tulsa

Trump explained that the ramp off the stage at West Point was ‘like an ice skating rink.’

Trump said he told a general he was wearing ‘leather bottom shoes,’ which were ‘not good for ramps.’

He said he was mindful of Gerald Ford falling down the steps of a plane in 1975, and of George H. W. Bush fainting after vomiting in the lap of the Japanese prime minister in 1992.

‘No way I can make it down that ramp without falling on my ass,’ Trump said he told the general.

The stage was ‘higher than this one’ in Oklahoma, he said.

The president also laughed-off the mockery of him using two hands to drink a glass of water.

He said he used two hands because his arms were tired from saluting so much.

He told the crowd in the BOK Center in Tulsa that he was perfectly capable of drinking a glass of water with one hand, and proceeded to demonstrate it. 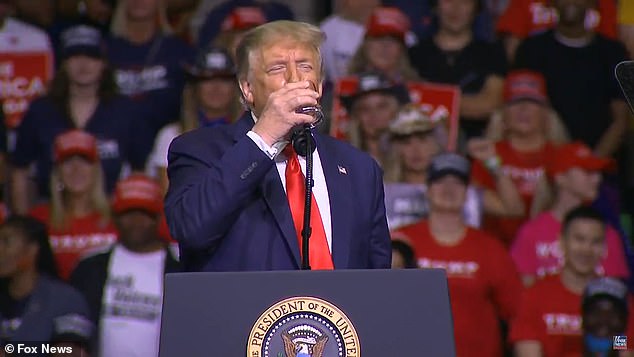 The president showed off his ability to drink a glass of water with one hand, on stage in Tulsa

The surprise at his appearance last week has weighed on Trump’s mind all week.

In an interview with the Wall Street Journal on Wednesday the president, unprompted, said that the ramp was ‘like an ice skating rink’ and that he wore leather-soled shoes, which made the ramp slippery.

At his rally, he continued to falsely claim that he ‘ran down the rest’ of the way, though footage from his appearance shows him slowly walking the entire distance.

He claims that news networks cut the footage of him running.

‘I looked very handsome,’ he said on Saturday.

‘I took these little steps, then I ran down.’ 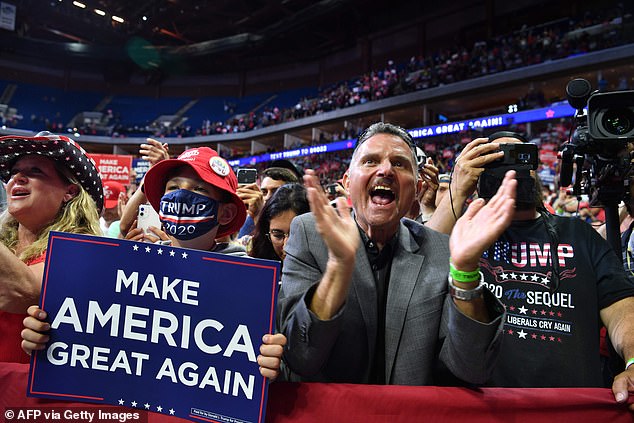 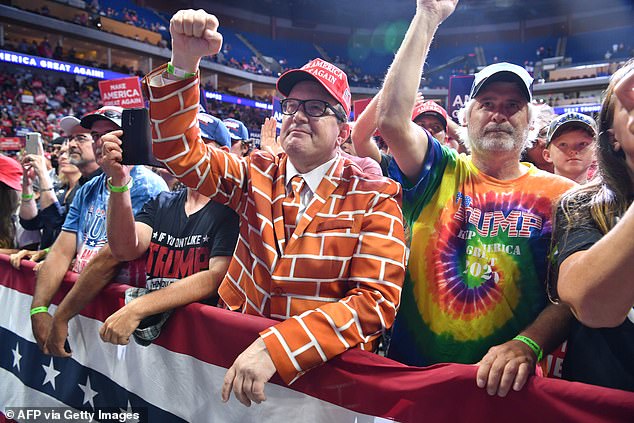 A man wearing a ‘wall’ jacket cheers the president in Tulsa, Oklahoma, on Saturday night

The president began speaking at around 7:15pm local time, after introductory speeches from Mike Pence, the vice president, and his son Eric.

The president was said to be keen to get back on the campaign trail and speak to his supporters.

In the week leading up to the rally, many expressed concern at the health implications of gathering thousands of people inside an arena while COVID-19 cases were rising in the city.

Tulsa had a record number of new coronavirus cases on Tuesday, Wednesday and Thursday.

Bruce Hart, the top health official in the city, said he was concerned it could become a ‘super spreader’ event.

Trump and his team dismissed the concerns as attempts to shame his supporters.