Trump haunted by Mueller probe as he hosts Halloween

President Trump offered high fives, handshakes and candy to kids, but to reporters just a quick wave and a grin, when asked about Paul Manafort, his ex-campaign manager who was indicted today.

Trump, accompanied by first lady Melania Trump, played it cool, as he posed for photo after photo with some of the 6,000 or so Trick-or-Treaters coming through the White House gates.

Earlier today, the president was reportedly ‘seething,’ according to CNN, as he fumed, said the Washington Post, over the Mueller probe as he watched television in the private residence. 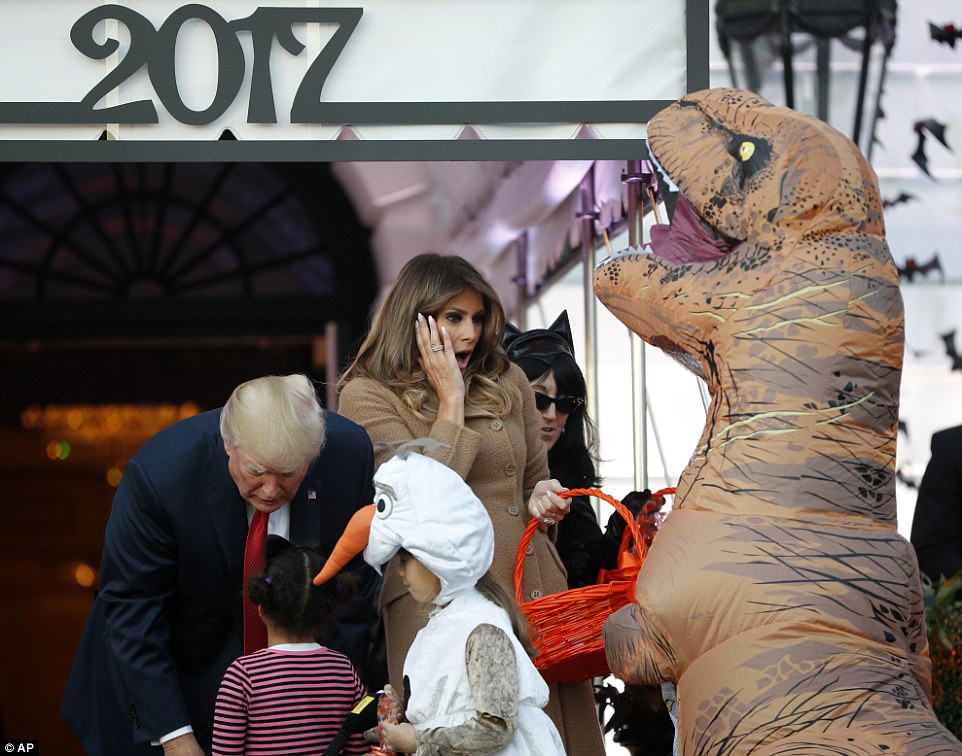 First lady Melania Trump gasps at the sight of a giant, inflatable dinosaur who came Trick-or-Treating at the White House Monday nigth 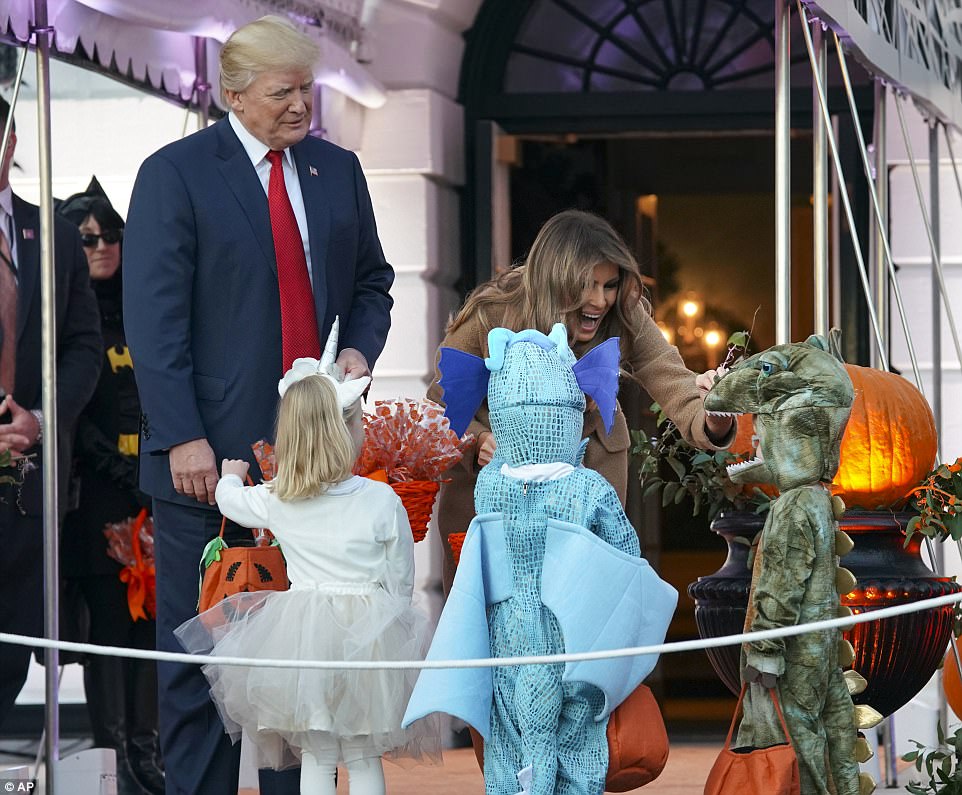 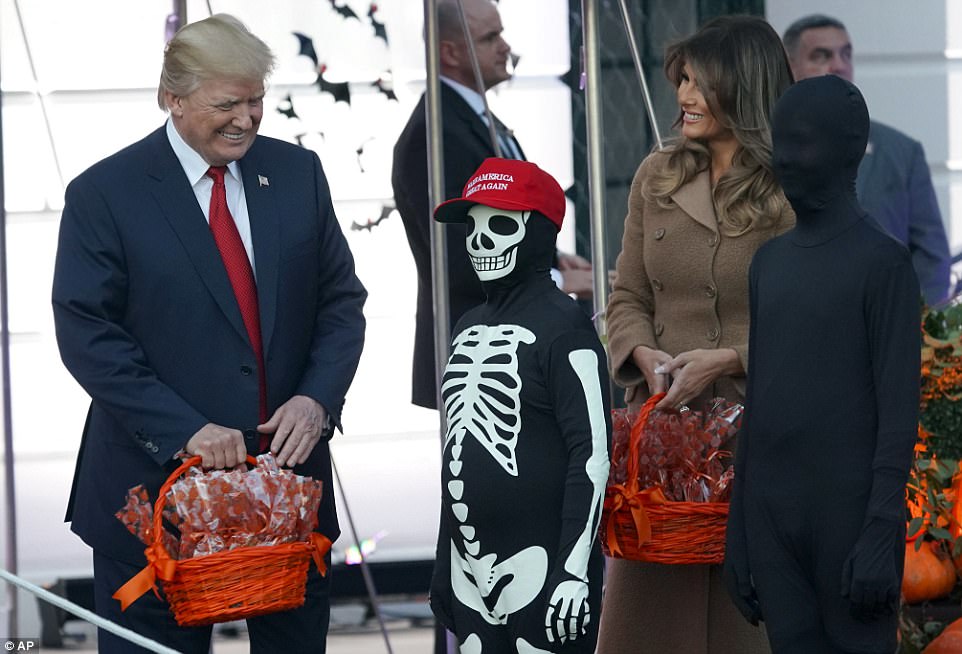 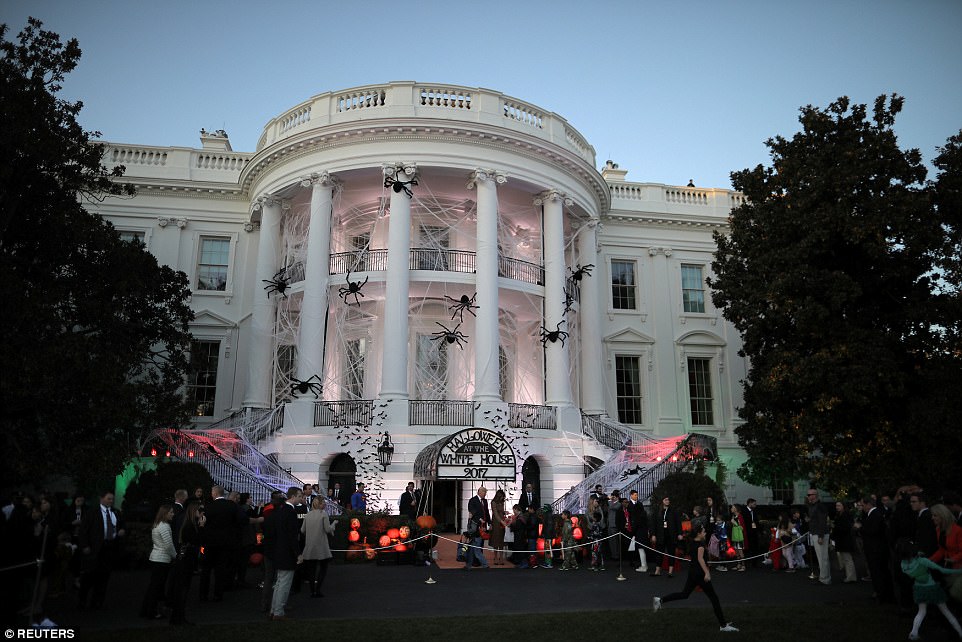 The White House was decked out for Halloween with spiders and their webs, along with pumpkins carved with images of former presidents’ heads 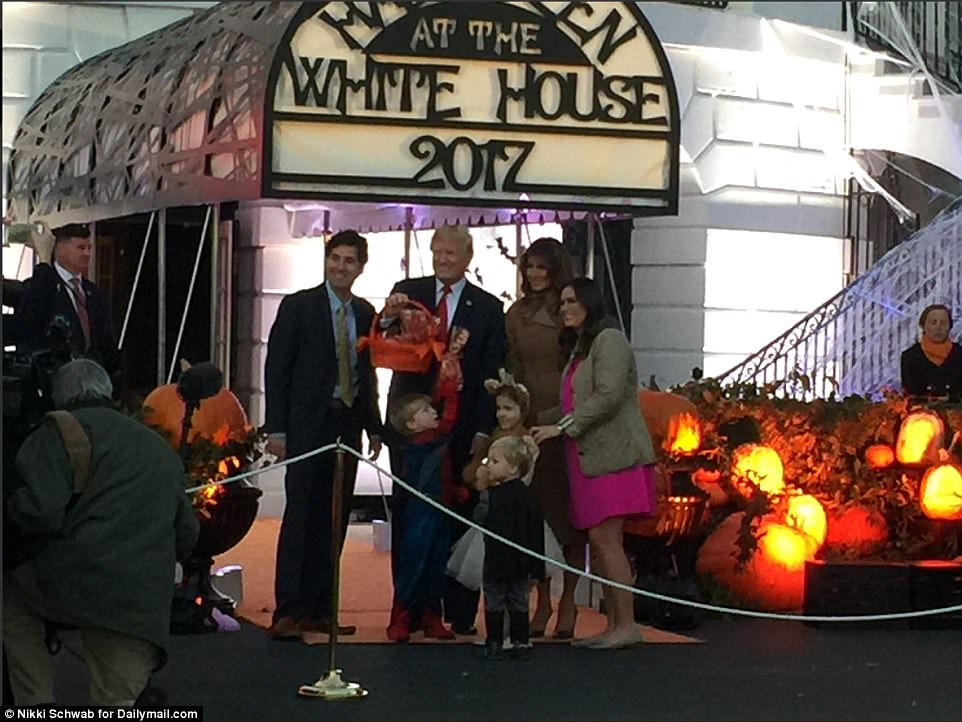 Press Secretary Sarah Huckabee Sanders (right) poses for a picture with her three kids – Batman, Spicer-Man and a giraffe  – her husband (left) and the first family 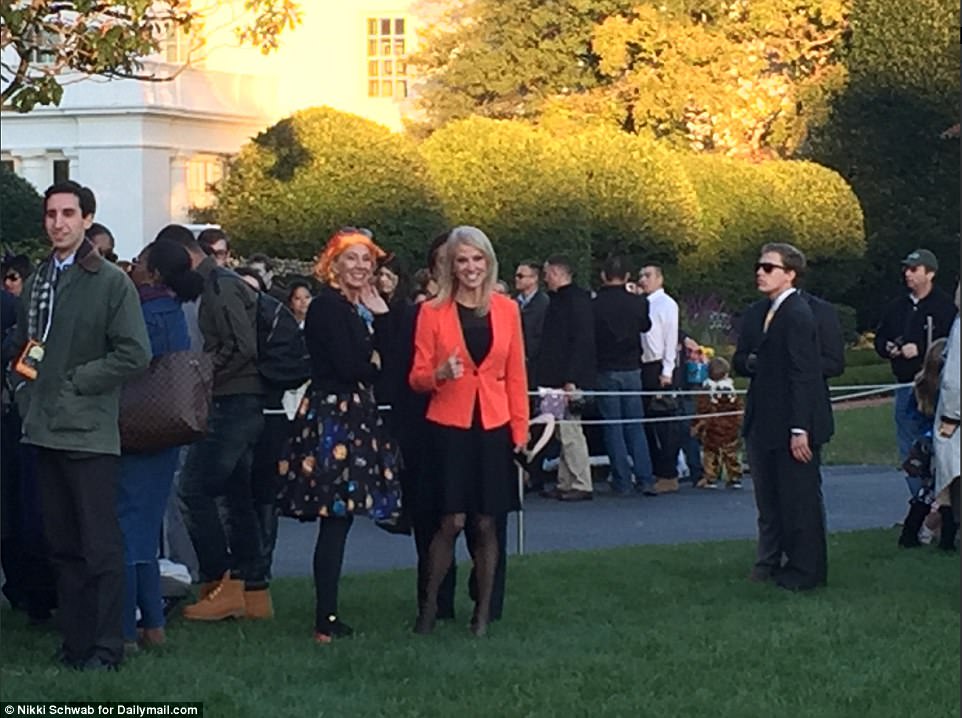 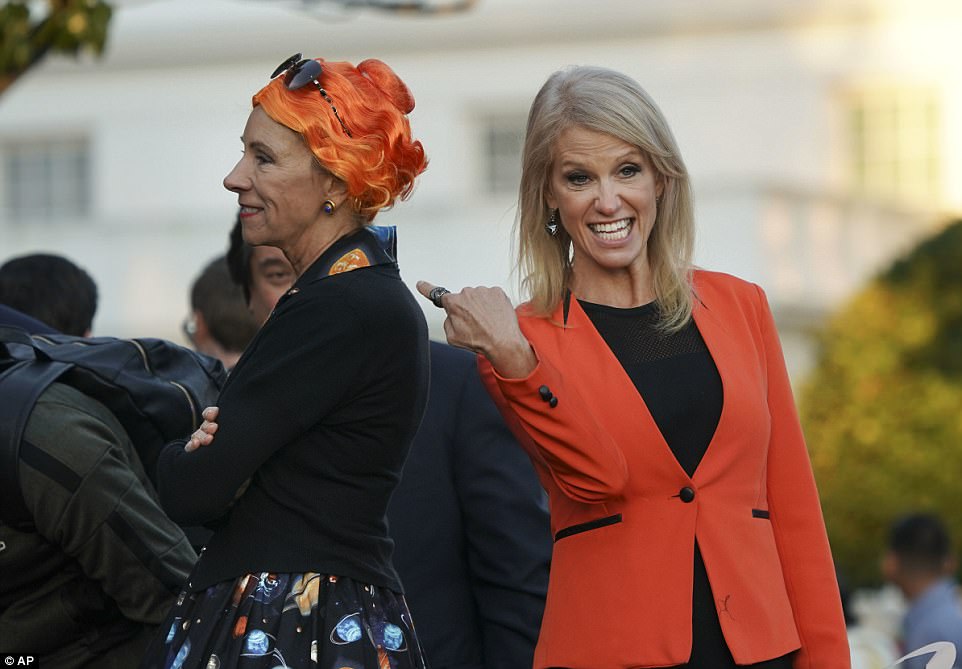 Counselor to the President Kellyanne Conway (right) points at Education Secretary Betsy DeVos (left) who is dressed as Miss Frizzle from the cartoon, the Magic School Bus 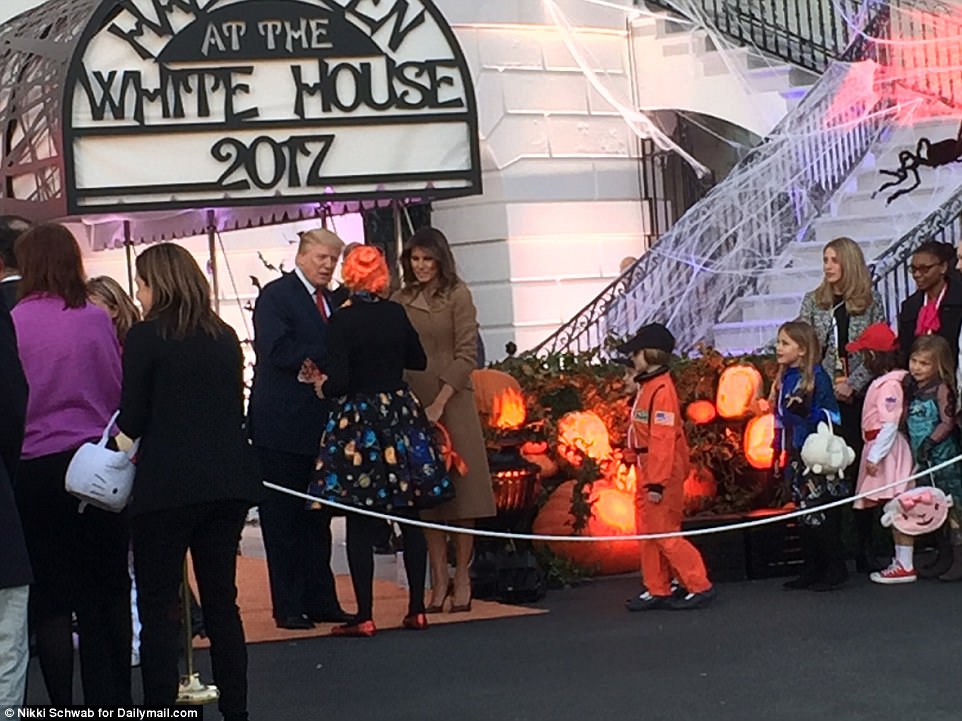 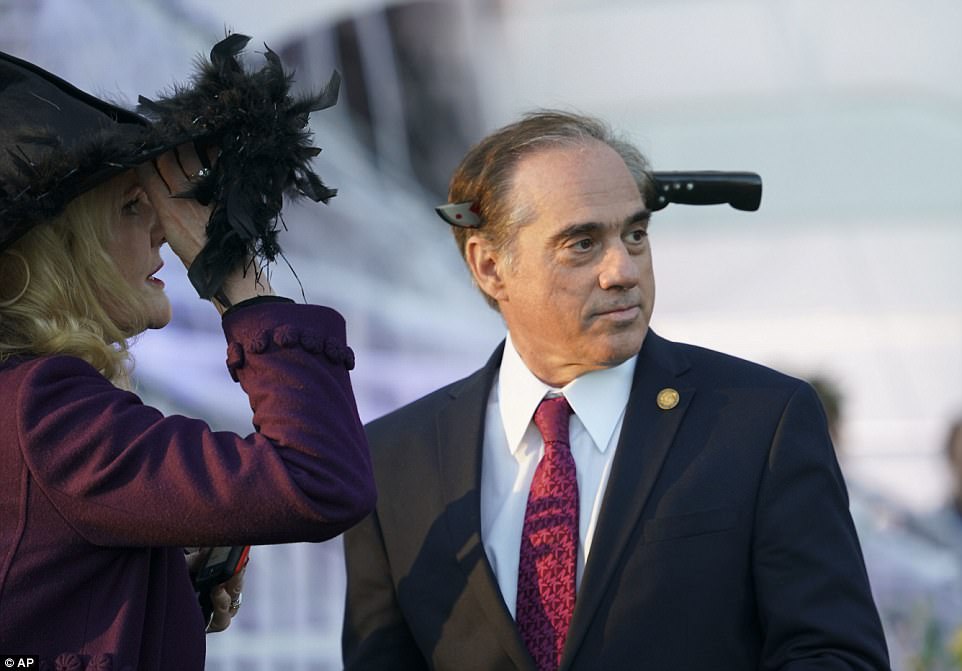 Veterans Affairs Secretary David Shulkin, wears a prop on his head as he walks on the South Lawn of the White House 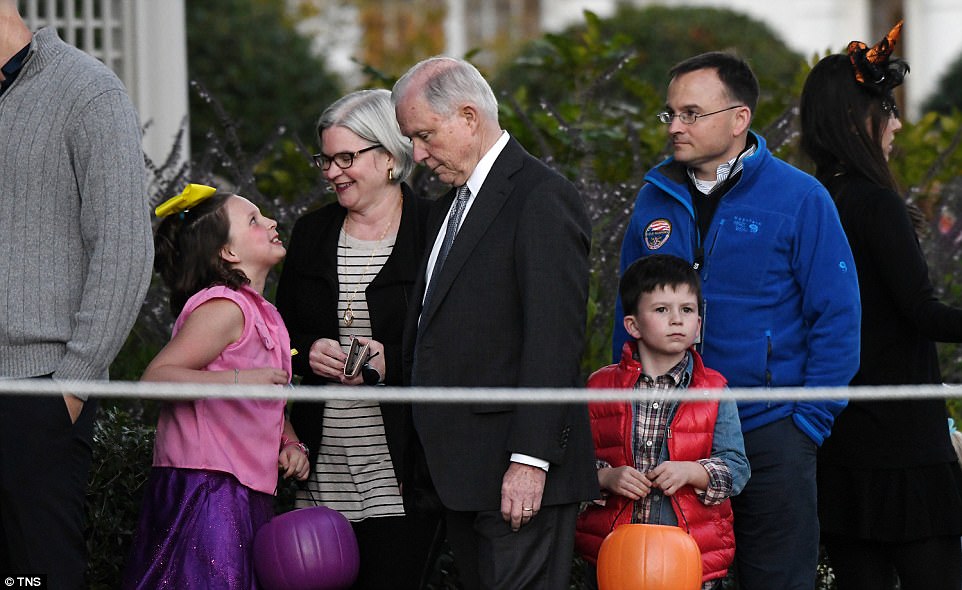 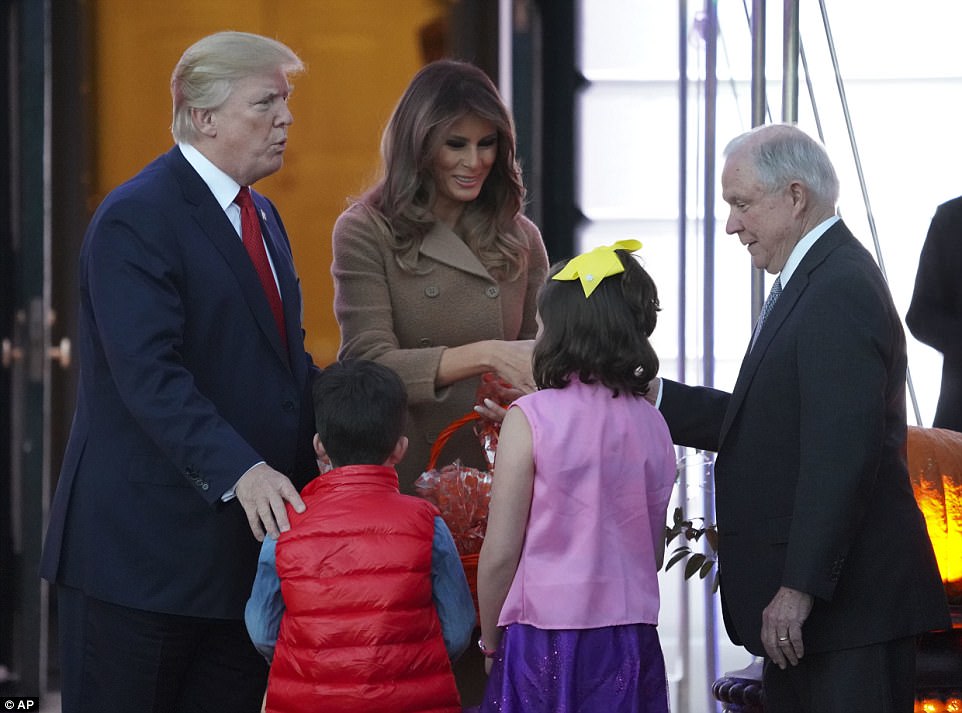 But during the Halloween event he happily chatted with guests.

Among those who came, the president greeted a number of tiny first responders, a giant inflatable dinosaur – who seemingly spooked the first lady– and a skeleton wearing a trademark Trump ‘Make America Great Again’ hat.

One adult had draped a cardboard gravestone over himself, indicating the day of the president’s election marked the death of the D.C. swamp.

While the president opted for his typical suit and tie, and the first lady, a tan trench coat and heels, some cabinet officials decided to sport costumes instead.

White House Counselor to the President Kellyanne Conway, wearing her own Halloween-appropriate orange and black, pointed out to reporters that it was Education Secretary Betsy DeVos underneath an orange wig, as she channeled the Magic School Bus character Miss Frizzle.

Veterans Affairs Secretary David Shulkin was walking around with a headband that made it look like someone had put a knife through his head. 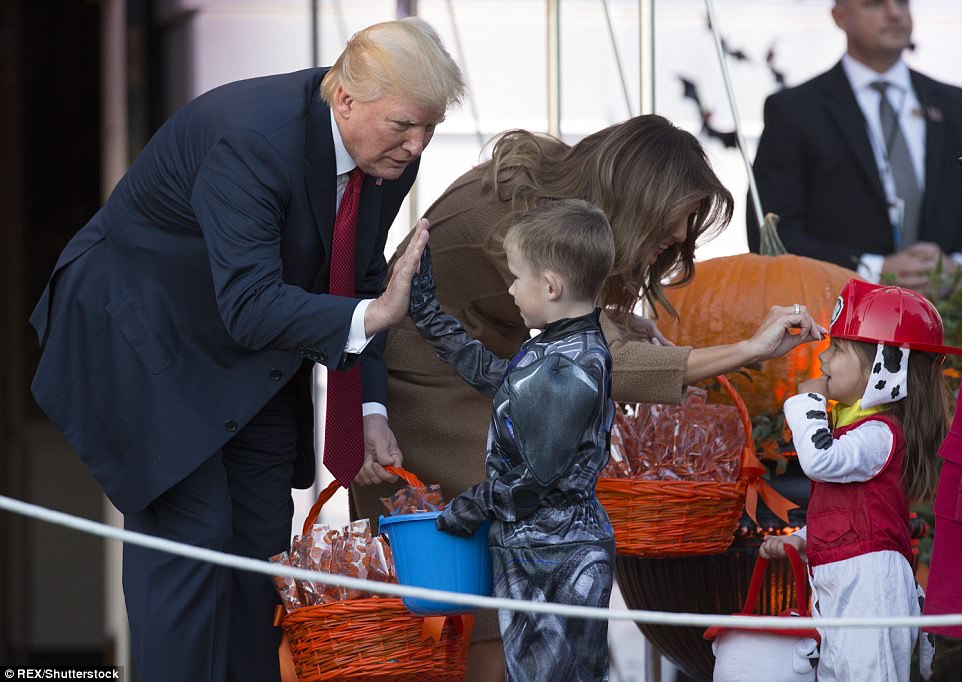 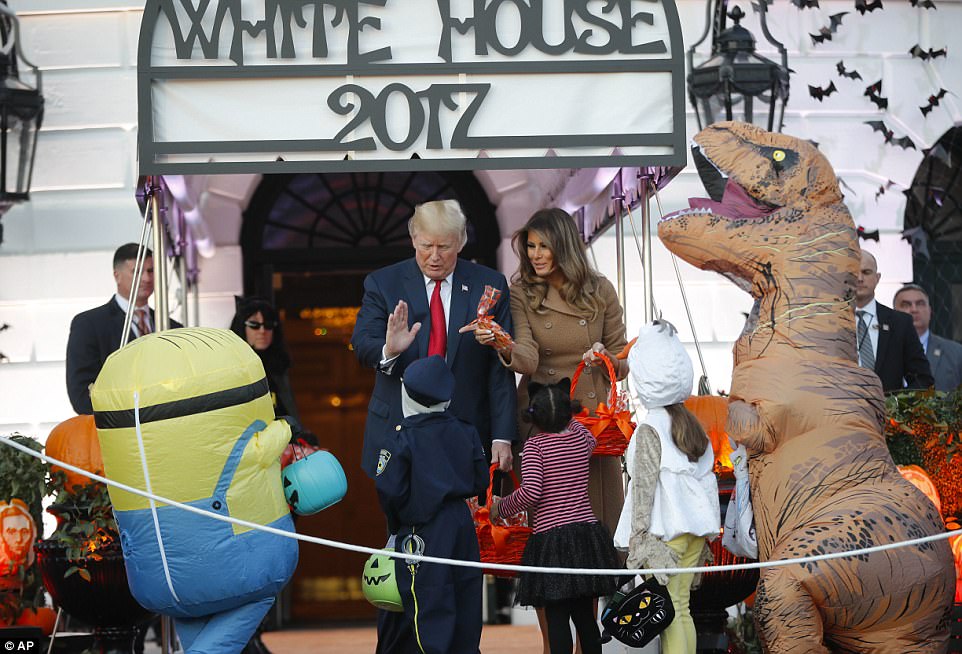 President Trump greeted a number of tiny first responders, including this cop, as well as an inflatable minion and a giant dinosaur 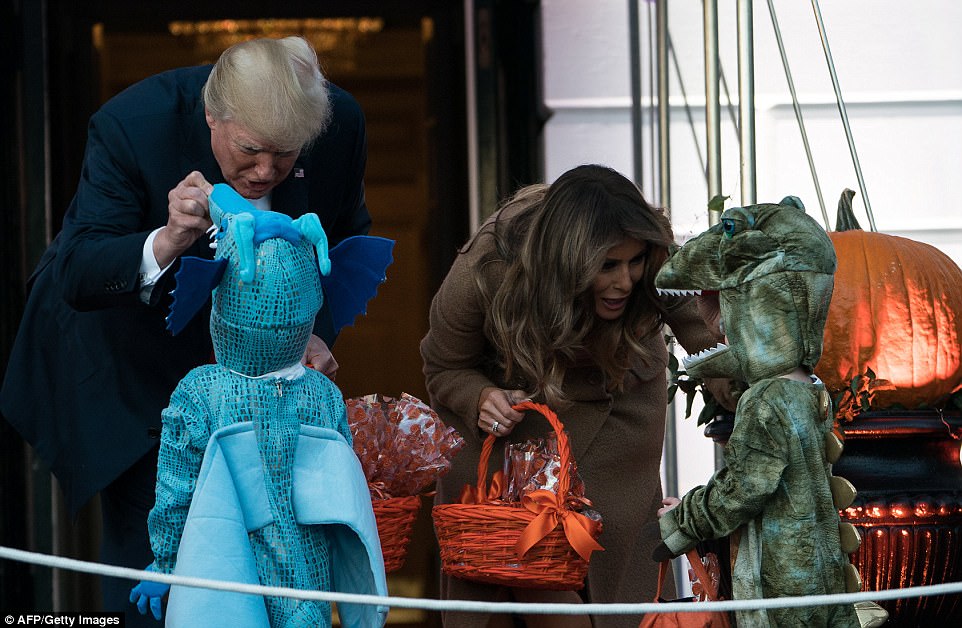 President Trump (left) grabs the mask of a small child dressed like a dinosaur, while the first lady (right) engages with another tiny dino 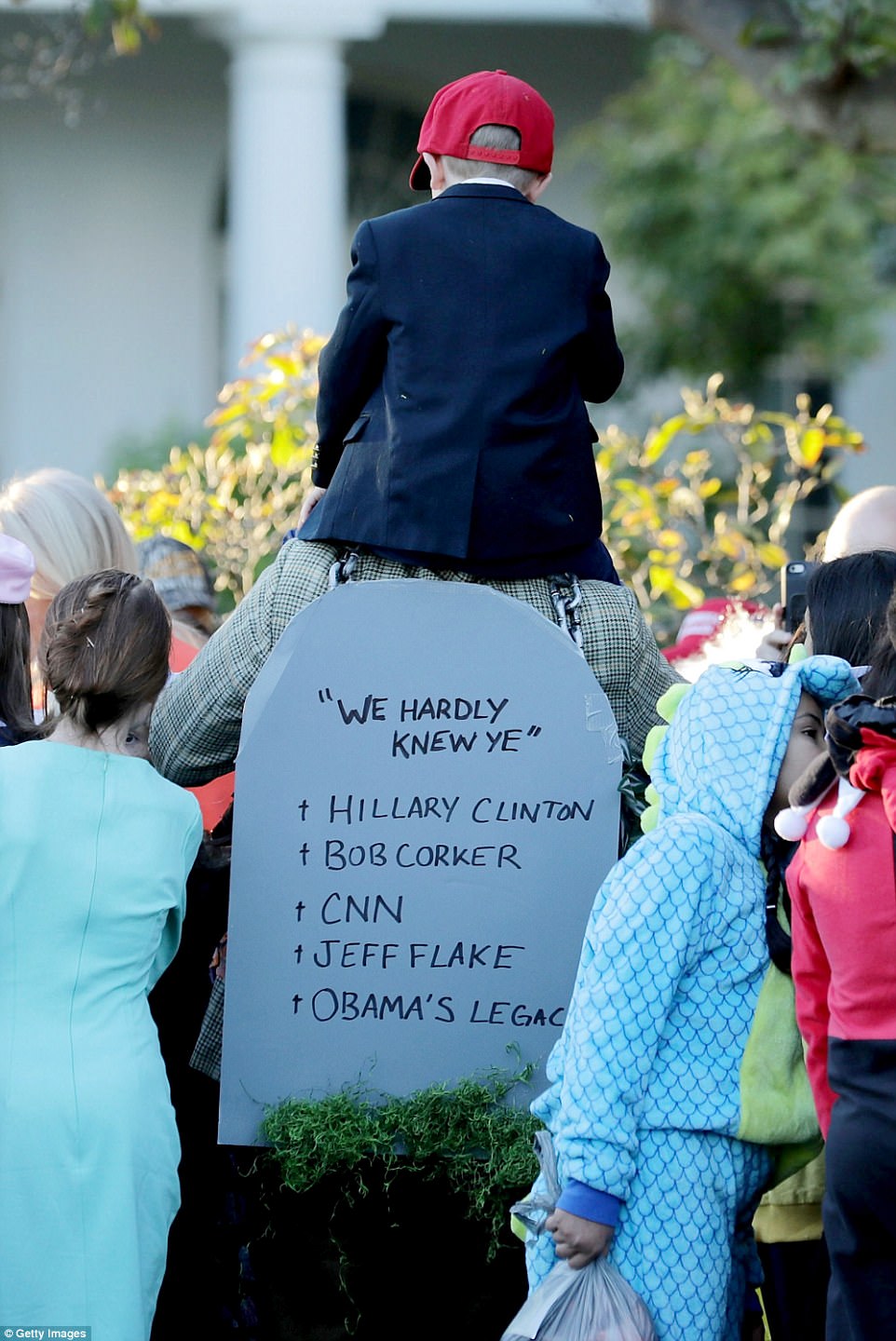 A child wearing a red hat sits atop the shoulders of a man wearing a ‘tomb stone’ which reads: ‘We hardly knew ye’

Labor Secretary Alexander Acosta played the role of doting dad, as he – dressed in a normal suit and tie – accompanied his two young daughters who sport matching hair cuts.

With Trump doing no White House events, except the evening’s Halloween festivities, it was Press Secretary Sarah Huckabee Sanders who had to face reporters’ questions and try to distance the administration from the individuals charged.

She was all smiles Monday night when the president and first lady posed for a photo with her three kids.

She had two superheroes in the family, a Batman and a Spider-Man, along with daughter Scarlett, who had dressed as a giraffe.

The Halloween event goes on for four hours with attendees coming from more than 20 Maryland, Virginia and Washington, D.C., school, along with kids who belong to the Boy Scouts and the YMCA.

Military families were also on hand. 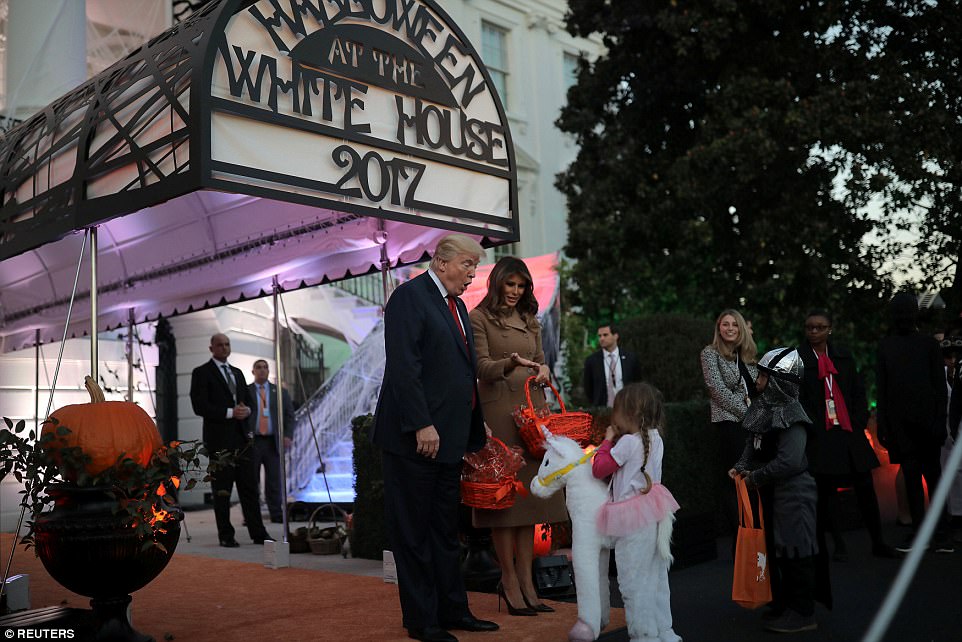 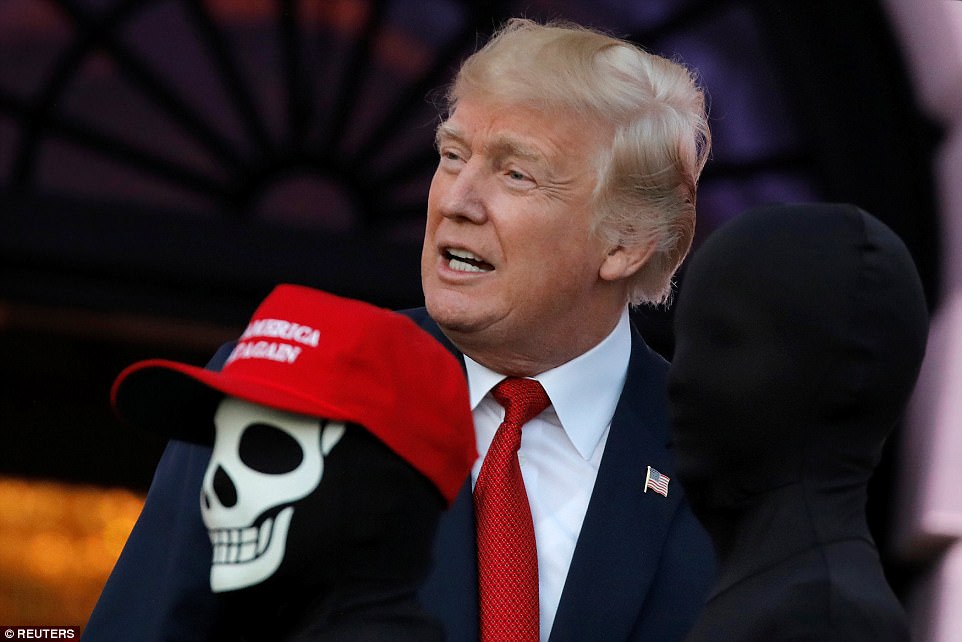 President Trump poses for a photo with two boys, one of whom sported his ‘Make America Great Again’ campaign hat 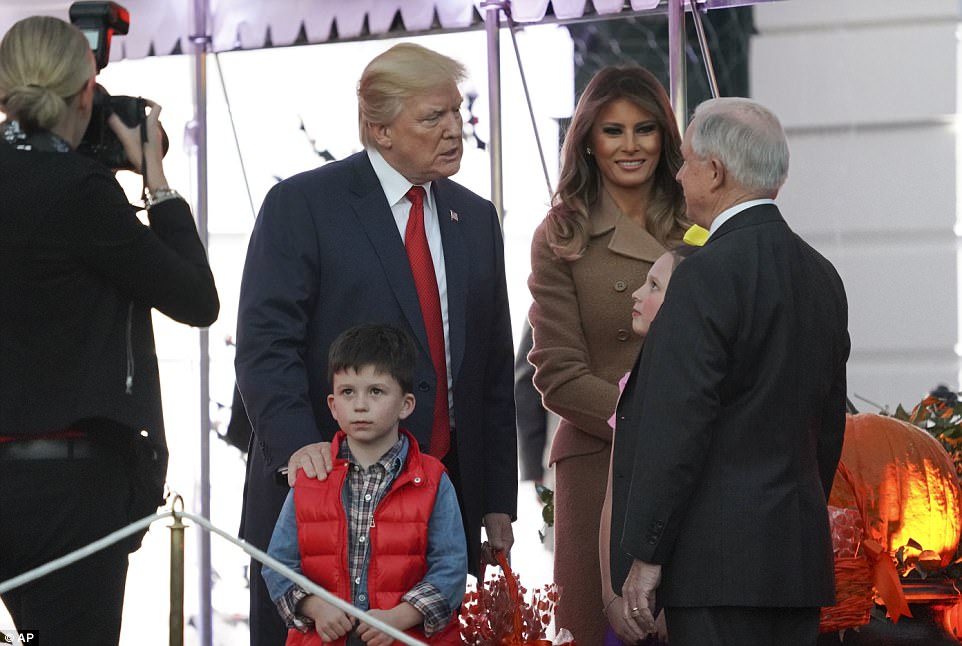