President Donald Trump is on the road again today, this time to build support for tax reform in Missouri, a state he won handily in the general election.

Trump has made grand promises about the reforms his administration is designing in tandem with Congress. He’s pledged more than once to deliver the ‘biggest tax cut’ in U.S. history.

His tax gurus are yet to put forward a comprehensive proposal, however, and have provided few new details of a plan beyond a set of ‘broad principles and priorities’ despite a self-imposed end-of-year deadline to get a bill through Congress.

Trump’s roll out in the Show Me State this afternoon has the potential to be more revealing. The president’s speech could also go off the skids as he hammers the state’s incumbent Democratic senator and relives his victory over Hillary Clinton in the last election.

President Donald Trump is on the road again today, this time to build support for tax reform in Missouri, a state he won handily in the general election

Endangered Democrat Claire McCaskill found herself in Trump’s cross-hairs over the weekend. Trump targeted her in a tweet that made reference to his trip and his desire to reform the tax code.

‘I will also be going to a wonderful state, Missouri, that I won by a lot in ’16. Dem C.M. is opposed to big tax cuts. Republican will win S!’ he said Sunday.

Republicans hold a majority of seats in the Senate. They need eight Democrats to cross party lines and vote with them to make tax reform a reality.

Trump could get his votes from Democrats like McCaskill who represent states that he won by wide margins. McCaskill is up for reelection 2016 after a near miss six years ago.

The president’s senior aides are hoping he’ll take a disciplined approach to this afternoon’s remarks, which were billed as an official White House event, not a campaign rally like the one he held last week in Arizona.

In Springfield, Trump is due to deliver a speech that is populist in tone and punches the need for an overhaul in wide strokes.

‘The president wants to take this conversation directly to the American people,’ an official told AFP.

Senior administration officials told Politico that Trump would test drive phrases like ‘jump-start America’ and ‘win again’ on the stump.

This spring his administration proposed to dramatically alter income brackets and eliminate most deductions. The goal, officials have said, is for Americans to be able to file their taxes on a post card.

Trump wants to reduce the number of tax brackets from seven to three and wipe out taxes on the first $24,000 earned by married couples.

The Republican president’s plan has a floor of 10 percent and a ceiling of 35 percent, with mid-range earners paying a rate of 25 percent.

Currently, the highest earners top out at 39.6 percent.

‘It’s a great plan,’ Trump said in April when it was unveiled. ‘It’s going to put people back to work.’

A joint statement signed by Trump’s treasury secretary and top economic advisor alongside GOP leadership, including the chairmen of the House and Senate tax-writing committees, late last month was less specific.

‘The goal is a plan that reduces tax rates as much as possible, allows unprecedented capital expensing, places a priority on permanence, and creates a system that encourages American companies to bring back jobs and profits trapped overseas,’ the statement signed by House Speaker Paul Ryan and Senate Majority Leader Mitch McConnell said. 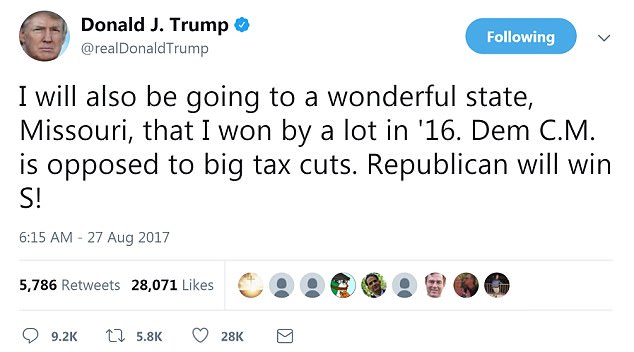 Endangered Democrat Claire McCaskill found herself in Trump’s cross-hairs over the weekend. Trump targeted her in a tweet that made reference to his trip and his desire to reform the tax code 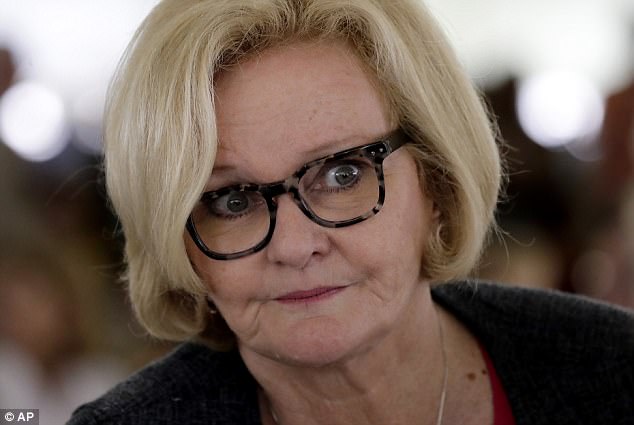 The president’s speech could also go off the skids as he hammers the state’s incumbent Democratic senator and relives his victory over Hillary Clinton in the last election.

The lawmakers joined Rep. Kevin Brady, chair of House Ways and Means, Sen. Orrin Hatch, the Senate Finance chairman, Treasury Secretary Steve Mnuchin and National Economic Council Chairman Gary Cohn in declaring a shared belief’ that the single most important action we can take to grow our economy and help the middle class get ahead is to fix our broken tax code for families, small business, and American job creators competing at home and around the globe.’

‘We are confident that a shared vision for tax reform exists, and are prepared for the two committees to take the lead and begin producing legislation for the President to sign,’ the statement said.

Cohn, Mnuchin and White House Legislative Affairs Director Marc Short have been working with lawmakers to develop a plan that satisfies GOP leaders in both chambers of Congress and can be put forward with limited intra-party squabbling.

The administration aims to finish work on the House bill next month and seeks approval by October. Short’s aggressive legislative calendar calls for the Senate to take up the House-passed bill in November.

Congressional leaders are less daring in terms of the timing. Ryan has said he wants to bring a package to the floor by the end of the year. His attention is trained at the moment to fights over the debt ceiling and spending that are sure to ensure when legislators return to Washington after the break.

Trump has made no secret of his fury at Republicans in Congress after they failed to deliver on health care.

Ryan, who chaired Ways and Means before he became speaker, anticipates that tax reform will not suffer the same fate.

‘I feel much more confident that we’re going to stick the landing on tax reform because we have now said we have consensus, here’s the framework, let’s go get it done,’ Ryan told Fox Business just before the August recess.

The last major tax overhaul in America was in 1986 and was championed by Republican President Ronald Reagan.