Donald Trump hinted on Friday that he is considering a move to limit the taxes Americans pay when they sell stocks, land, small businesses and other assets – despite saying a week ago that ‘it will be perceived, if I do it, as somewhat elitist.’

Capital gains are profits earned by selling property for more than it originally cost. The first $250,000 of profit on the sale of a home is exempt. Most Americans pay either 15 or 20 per cent.

Indexing involves taking inflation into account by recalculating an asset’s original purchase price when someone sells it. That results in less profit and a lower tax burden.

‘An idea liked by many?’ Trump asked in his tweet.

He has swung pendulum-like on the issue in recent weeks, appearing to test the waters and gauge possible reactions from voters and investors.

President Trump scoffed a week ago at the idea of ‘indexing’ capital gains to inflation, but retweeted major supporters of it on Friday; ‘indexing’ is the IRS recalculating an asset’s original purchase price when it’s sold, taking inflation into account; that results in a smaller profit and taxes 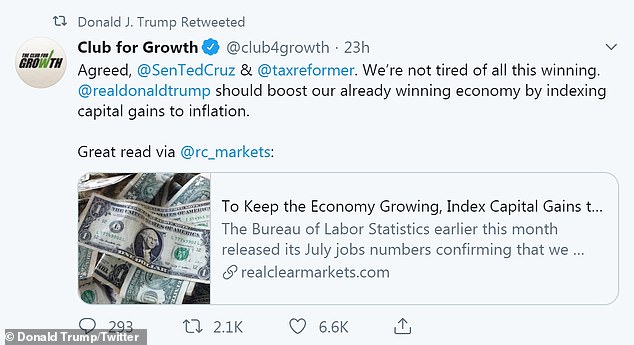 The president signaled support for the indexing maneuver on Friday, retweeting its supporters and leaving a question mark as a tease to the markets

The president told reporters on August 20 that ‘many people like indexing, and it can be done very simply. It can be done directly by me. And so we’ve been looking at that.’

He stunned the press corps with a U-turn just one day later, saying: ‘I’m not looking to do indexing.’

‘I’ve studied indexing for a long time. I think it will be perceived, if I do it, as somewhat elitist. I don’t want to do that,’ he said.

‘I think indexing is really probably better for the upper-income groups. I’m not looking to do that,’ Trump added. ‘But if I wanted to do it, I believe I could.’

The president also retweeted a link to Cruz’s Friday op-ed from the Club For Growth, a free-market group that the president has sparred with in the past.

‘We’re not tired of all this winning,’ the group had tweeted. @realdonaldtrump should boost our already winning economy by indexing capital gains to inflation.’

Cruz, a former Trump rival who candidate Trump once lambasted as ‘Lyin’ Ted,’ has been trying to persuade Treasury Secretary Steve Mnuchin to flip a regulatory switch and change the income tax calculation on capital gains. He has been unsuccessful so far.

Cruz has been pressuring Treasury Secretary Steven Mnuchin – unsuccessfully so far – to cut taxes for investors by indexing capital gains, arguing that the move would encourage savings and investment.

His op-ed, coauthored by longtime anti-tax crusader Grover Norquist, rails against the ‘inflation tax’ and claims consumers routinely ‘end up being taxed on illusory income as the result of economy-wide price-level increases.’ 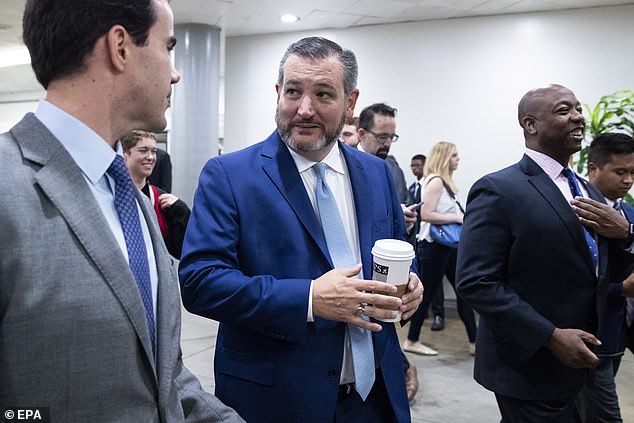 In a separate Washington Post op-ed Tuesday, Norquist laid out two scenarios to illustrate what a regulatory change could do.

According to IRS data, more than 24 million U.S. households reported capital gains on their 2016 income tax returns. A majority were from taxpayers whose gross income was less than $100,000.

In June the U.S. Supreme Court affirmed that courts should defer to federal agencies when they reinterpret their own regulations, within reason.

The case was Kisor v. Wilkie, decided by a 5-4 margin.