President Donald Trump slammed Sens. Jeff Flake and Bob Corker hours after both issued extraordinary denunciations of the way he has conducted his presidency, rapping them for acting ”hurt’ and ‘wounded.’

Trump hit back at Flake after the two-term Arizona lawmaker delivered a blistering Senate floor speech where he said he could no longer be ‘complicit’ in aiding Trump.

That remarkable event occurred just moments after the conclusion of a GOP Senate lunch with Trump and hours after an increasingly caustic exchange between Trump and Corker, the retiring Senate Foreign Relations Committee chairman from Tennessee.

Both men were facing difficult reelection prospects when they announced their decisions to leave the Senate and immediately began unloading on Trump.

Sen. Jeff Flake, R-Ariz., dramatically announced that he would not be running for re-election next year, citing the current, ugly state of politics

‘The reason Flake and Corker dropped out of the Senate race is very simple, they had zero chance of being elected. Now act so hurt & wounded!’ Trump Tweeted Wednesday.

The president also sent out an up-beat missive about Tuesday’s meeting, which failed to repair a breach between Trump and his majority party in the Senate.

‘The meeting with Republican Senators yesterday, outside of Flake and Corker, was a love fest with standing ovations and great ideas for USA!’ the president wrote.

THAT WENT WELL: Trump also tweeted about his Tuesday meeting with Senate Repubicans

On Tuesday, moments after news broke of his decision, Flake said he would ‘no longer be silent and that he would not be running for re-election.

Flake, who has been a constant thorn in President Trump’s side – earning plenty of ire from the president too – noted that he had ‘children and grandchildren to answer to.’

‘I decided I would be better able to represent the people of Arizona and to better serve my country and my conscience by freeing myself of the political consideration that consumed far too much bandwidth and would cause me to compromise far too many principles,’ Flake said.

‘To that end, I am announcing today that my service in the Senate will conclude at the end of my term in early January 2019,’ he added.

‘I haven’t spoken with him directly since the announcement by Sen. Flake,’ Huckabee Sanders said of Trump. ‘But I think that based on previous statements and certainly based on the lack of support that he has from the people of Arizona, it’s probably a good move.’ 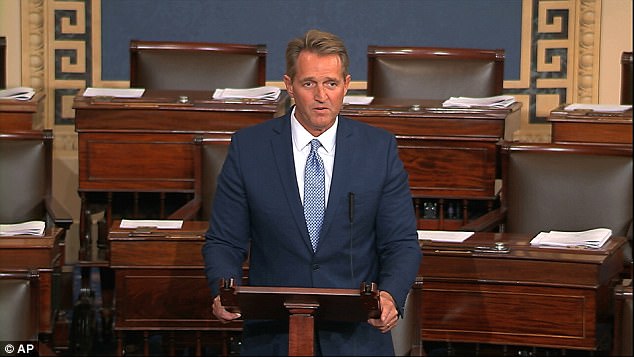 Sen. Jeff Flake said he was done being ‘complicit,’ as he belongs to the same political party of President Trump and thus announced Tuesday he would no be running for re-election next year

And that was surely the case Tuesday as Flake tore into the politics of President Trump through his Senate address.

He said he hadn’t soured on the Senate, but rather the current condition of his Trump-led party.

‘This spell will pass, but not by next year,’ Flake said.

On the floor, Flake said he had risen to address ‘a matter that has been very much on my mind at a moment when it seems that our democracy is more defined by our discord and dysfunction than our own values and principles.’

He began his speech by making the ‘obvious point,’ that elected political office isn’t an indefinite career.

‘We are not here to simply mark time,’ he noted. ‘Sustained incumbency is certainly not the point of seeking offices and there are time when we must risk our careers in favor of our principles.’

Flake turned and expressed a number of regrets and implored that his colleagues not embrace what he called the ‘new normal.’

Among the things that fit the definition: the coarseness of the present dialogue, the undermining of democratic ideals, personal attacks, threats against freedoms and institutions and the flagrant disregard for the truth.

‘None of these appalling features of our current politics should ever be regarded as normal,’ Flake said, adding a ‘heaven help us,’ if that becomes true.

Then he went after Trump – though never once uttered the president’s name.

‘We must stop pretending that the conduct of some in our executive branch are normal,’ he said. ‘They are not normal.’

‘Such behavior does not project strength because our strength comes from our values,’ Flake continued. ‘It, instead, projects a corruption of the spirit and weakness.’

The senator said lawmakers had fooled themselves long enough by thinking ‘a pivot to governing is right around the corner.’

For months, first in the Republican primary last year, then during the general election and all through his first nine months in the White House, political watchers have wondered when President Trump would become more presidential. Flake predicted that time would be never.

The Republican looked to his fellow Republicans – though only Sens. John McCain, Bob Corker, both of whom have recently tussled with Trump, along with Sens. John Barrasso, Pat Roberts, Ben Sasse, Rand Paul and Jim Risch were in the room – and asked what would happen if the shoe was on the other foot.

Would his Republicans not speak out if a Democratic president was displaying this behavior?

While announcing that he would not run, Flake also pointed to the narrower and narrower path he would have had to weave through to win, saying his party’s settled on a message ‘more viscerally satisfying’ that of ‘anger and resentment.’

‘In the case of the Republican Party, those things also threaten to turn us into a fearful, backward-looking minority party,’ he said.

Turning his attention to the top of the party again, he used Trump’s campaign motto against the president.

‘We were not made great as a country by indulging in or even exalting our worst impulses, turning against ourselves, glorifying in the things that divide us and calling fake things true and true things fake,’ he said. ‘We did not become a beacon of freedom in the darkest corners of the world by flouting our institutions and failing to understand how hard won and vulnerable they are.’

Flake said he planned to spend the 14 months of his Senate career speaking out and ended his speech by quoting President Abraham Lincoln.

‘A political career does not mean much if we are complicit in undermining these values,’ Flake said.

Senate Majority Leader McConnell sat stone-faced through most of the speech, but applauded when it was over, then rose to salute one of his members.

McConnell had just invited President Trump to each lunch with the GOP senators, trying to get a tax reform package back on track.

However, before Trump’s lunch date, he had reignited his feud with Sen. Bob Corker of Tennessee, which quickly took over the news cycle.

McConnell, however, tried brushing that under the table as he spoke to reporters after having lunch with the president and the GOP caucus.

‘I don’t have any observation about that,’ McConnell said, before later labeling the feud a ‘distraction.’

‘I don’t know how many times I have to say the same thing, there’s a lot of noise out there,’ McConnell huffed. ‘But hat we’re concentrating on is the agenda that the American people need.’

‘I think there is great cohesion among Republicans of all persuasions to achieve this goal before the end of the year,’ McConnell said.

Several minutes later, Flake announced his plans to drop out of the 2018 race, smacking his party and his president around in the process.

Only a handful of senators were in the room at the time of the speech, with Virginia Democrat Sen. Kaine calling a ‘ tragedy for the institution.’

‘I said to one of my Republican colleagues as we were walking off the floor. We both had the same thought: It was very depressing. A very depressing day,’ Kaine told reporters immediately after Flake’s speech.

Others went about their business, fielding questions on Puerto Rico and infrastructure even as a member of their 52-seat majority called it quits railing against the ‘new normal.’

‘I was in a meeting, haven’t heard his speech,’ said Sen. Mike Lee of Utah, who tends to avoid hallway interviews.

From the other side of Capitol Hill, House Speaker Paul Ryan shared a similar sentiment.

‘I’m saddened Congress is losing my friend Jeff Flake,’ the Republican speaker said, heralding Flake’s war on earmark spending. ‘Jeff’s retirement is a loss to the Senate and the greater cause of conservatism,’ Ryan added.

The upside to the Arizonan’s departure, according to the McConnell-aligned PAC, the Senate Leadership Fund, is that Flake’s exit would shake up the race, making it harder for the Steve Bannon-backed former state legislator Kelli Ward to win.

‘The one political upshot of Sen. Flake’s decision today is that Steve Bannon’s hand-picked candidate, conspiracy-theorist Kelli Ward, will not be the Republican nominee for this Senate seat in 2018,’ said the group’s President and CEO Steven Law.

Bannon had marked Flake as endangered as he announced that he would field primary opponents for all the Republican incumbents, excluding only Texas Sen. Ted Cruz.

A spokeswoman for Bannon did not return DailyMail.com’s request for comment.

He made fun of a town hall event she hosted as a state senator ‘to explore the claim that jet contrails are really chemicals sprayed by the government for weather, mind or population control.’

Karl added that Ward expressed no regrets for lending legitimacy to the zany conspiracy theory.