President Donald Trump said Friday that he found the testimony by a woman who said she was sexually assaulted by Supreme Court nominee Brett Kavanaugh decades ago to be ‘very compelling,’ but declared that he has given no consideration to the idea of nominating someone else.

‘Not even a little bit,’ Trump said.

Hours later he was ordering the FBI to probe Christine Blasey Ford’s allegations as part of a deal to salvage any chance of Senate confirmation next week. Republicans requested the investigation after holdout Sen. Jeff Flake demanded it.

The president told reporters that Ford ‘was a very credible witness’ but also that Kavanaugh’s own testimony on Thursday before the Senate Judiciary Committee was ‘an incredible moment.’

Reiterating his support for Kavanaugh, Trump said, ‘I think it will work out very well for the country.’

The president also expressed confidence in the confirmation process as an 11th-hour demand from a key Republican senator again threatened to derail the timeline for a Senate vote.

‘I’m going to let the Senate handle that, they’ll make their decisions and they’ve been doing a good job and very professional,’ he said. ‘I’m sure it will all be very good.’

President Donald Trump said during a meeting with Chilean president Sebastian Pinera in the Oval Office that he hasn’t given any thought to replacing Supreme Court nominee Brett Kavanaugh, even though he found his sexual-abuse accuser Christine Ford ‘credible’ 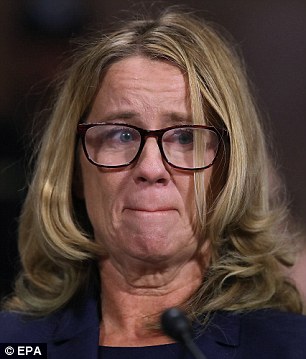 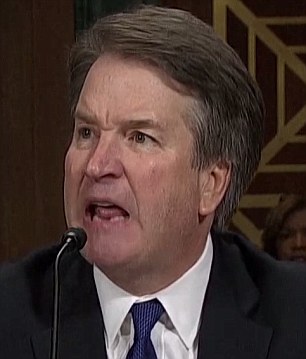 Ford (left) claims that during a drunken high school party in 1982, Kavanaugh pinned her to a bed and groped her while trying to take off her clothes, ultimately putting his hand over her mouth to muffle her cries for help; Kavanaugh says it never happened and Ford has presented no corroborating evidence

Trump said he was ‘just hearing’ about comments from Arizona Sen. Jeff Flake, who called for a delay in the Senate vote for up to a week for more investigation.

‘I’ve ordered the FBI to conduct a supplemental investigation to update Judge Kavanaugh’s file. As the Senate has requested, this update must be limited in scope and completed in less than one week,’ he said in a statement.

Trump missed hardly a moment of Thursday’s hearing, relying on DVRs to keep up on the hearing from his private office on Air Force One as he traveled from New York to Washington, and continuing to monitor it back at the White House, where Ford’s voice echoed from TVs around the building.

Within moments of the eight-hour proceedings concluding, Trump tweeted his approval of Kavanaugh’s performance and called on the Senate to move swiftly to a vote. ‘His testimony was powerful, honest, and riveting,’ Trump said.

‘Democrats’ search and destroy strategy is disgraceful and this process has been a total sham and effort to delay, obstruct, and resist. The Senate must vote!’

Ford’s tearful recounting of allegations that Kavanaugh sexually assaulted her when they were in high school led Trump to express sympathy for Kavanaugh and his family for having to listen to the testimony, according to two Republicans close to the White House but not authorized to speak publicly about private conversations.

They added that Trump expressed some frustration at the process – and the staff work – that led Kavanaugh to this point. 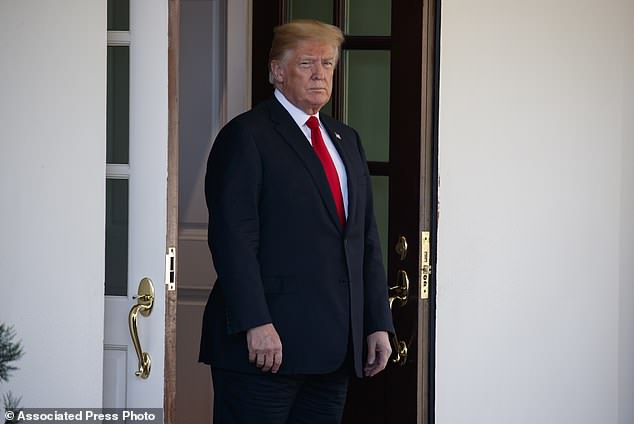 President Trump said he would go along with Senate Republicans’ call for a new FBI probe of Ford’s claims, punting the ball to Senate Majority Leader Mitch McConnell

After seeing Ford’s powerful testimony, White House aides and allies expressed concern that Kavanaugh, whose nomination already seemed to be teetering, would have difficulty to deliver a strong enough showing to match hers.

White House officials believe Kavanaugh’s passionate denials of Ford’s claims, including the judge’s tearful description of the impact the accusations had on his family, met the challenge.

A White House official who was not authorized to speak publicly said the West Wing saw the judge’s opening statement as ‘game changing’ and said Trump appeared to react positively.

Trump told associates after the hearing that he liked Kavanaugh’s fighting attitude and was critical of Democrats who he sees as politicizing the process, said a person familiar with his thinking who was not authorized to disclose private conversations.

He was happy with Republicans on the committee, though he was not impressed with the questioning from an outside female prosecutor. While he acknowledges the vote will be close, he currently thinks they will get there.