The White House says it will be an ‘open discussion’ with the president ‘on the issue of school safety’ much like the other conversations he’s had with affected parties since the Parkland shooting.

Wednesday’s session will be attended by 10 Republicans and seven Democrats, including Sens. Dianne Feinstein of California and Chris Murphy of Connecticut. Florida’s Republican senator, Marco Rubio, will also attend.

The Sunshine State’s Democratic senator, Bill Nelson, says he was not invited.

A White House spokesperson did not immediately respond to DailyMail.com’s request for comment on the snub. 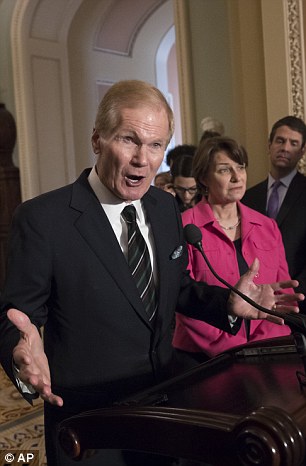 A chagrined Nelson told reporters Wednesday afternoon that he was not invited to the president’s chat today with legislators at the White House.

‘I don’t know why I wasn’t invited,’ he said, according to ABC News. ‘And of course that doesn’t foster bipartisanship when you’re trying to solve a problem.’

Trump has been holding listening sessions with parents, students, teachers, state and local officials, law enforcement officers and other stakeholders in the gun control debate, including the National Rifle Association, in the weeks since the Marjory Stoneman massacre.

Yesterday, the White House promised to unveil a set of ‘school safety’ recommendations later this week that will include specific policy initiatives.

The president is already supporting legislation that would incentivize states and agencies to fully comply with existing federal background check mandates. His White House also endorsed a bill this week that funds gun violence prevention training for teachers, law enforcement and students.

Trump last week directed his attorney general to find a way to regulate bump stocks, claiming this week that regardless of what Congress has to say about the matter he’s ‘getting rid’ of the accessory that manipulates semiautomatic rifles.

Other suggestions the president has made have been just that, with the White House pledging hardened stances by the end of the week.

Among those: a proposal to raise the minimum age for some gun purchases and a proposition to allow upwards of 700,000 teachers to carry concealed weapons.

Neither of the proposed remedies to gun violence was gaining traction on Capitol Hill this week as Congress returned from a week-long hiatus.

And the president appeared to be softening his support for legislation that would bar teens from purchasing semi-automatic weapons this week as Congress returned to Washington. 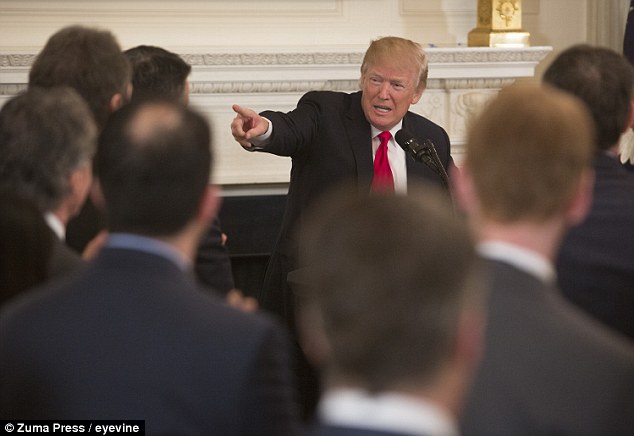 President Donald Trump will unveil a set of ‘school safety’ recommendations later this week, the White House says, that will include specific policy initiatives 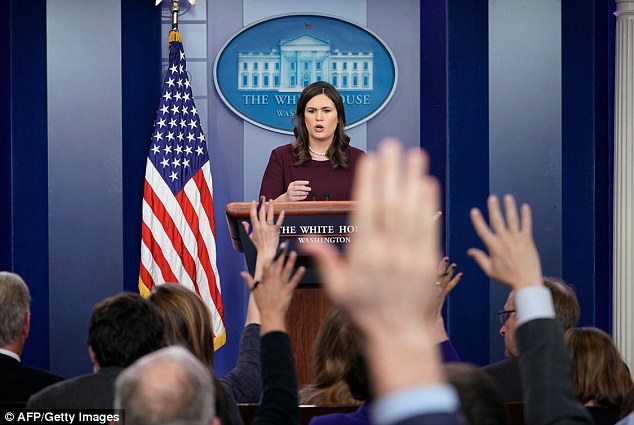 A top GOP congressional aide told DailyMail.com on Tuesday that the prospects are ‘pretty dim,’ for age limits that could be why the president is backing away from it.

‘That proposal won’t get a lot of traction in Congress,’ the source said.

Trump did not put forward the proposal during at Friday speech before conservative activists, and he did not bring it up Monday at a bipartisan meeting with governors at the White House, where gun violence was the top talker during a televised session.

Sources familiar with the White House’s discussions with leadership on Capitol Hill told CNN later that Trump was seemingly moving away from his position.

A senior congressional aide told DailyMail.com that discussions about the president’s proposals, like allowing teachers to pack heat, were still in their early stages, with Congress having been out of session last week and only just returning on Monday to Washington.

Furthermore, the House will be out from Wednesday on as the late evangelical pastor Billy Graham lies in honor in the U.S. Capitol.

The source said that the basic posture of the House is to see what can pass in the GOP-controlled Senate, which is focused this week on nominations.

House Republicans have already passed legislation to strengthen the existing background check system that it paired with a concealed carry provision. The Senate version of the background check bill has lingered in the Senate.

Trump’s administration has cautiously endorsed the Senate legislation that’s sponsored by Democrat Chris Murphy of Connecticut, who says he’ll be joining the president this week at the White House, and GOP whip John Cornyn of Texas.

On Monday the bill hit a roadblock in the upper chamber, though, as conservative senator Mike Lee opposed the measure and Democratic senators pushed for more aggressive gun control legislation. 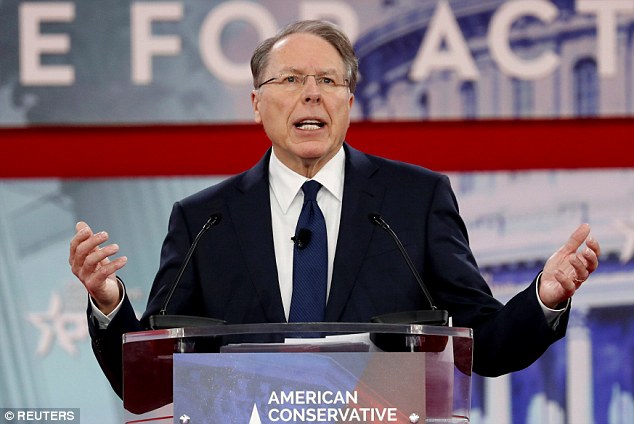 Trump has said he favors comprehensive legislation, but the White House has refused to take a position on universal background checks.

‘We’d have to see what it looks like and review that before we make that determination,’ press secretary Sarah Huckabee Sanders said Monday.

Sanders was equally non-committal on Tuesday in her daily briefing when questioned about the president’s support for a bill put together by Sens. Joe Manchin, a West Virginia Democrat, and Pat Toomey, a Pennsylvania Republican.

‘The President, as I’ve said, expects to meet with a number of lawmakers tomorrow from both sides of the aisle, and we’ll have some more information about specifics after that,’ she asserted.

The Trump spokeswoman insisted Tuesday, as she did Monday, that the president remains supportive of a proposition to make sales of the AR-15 and other automatic rifles 21 and over, despite the National Rifle Association’s adamant opposition to the measure.

‘He knows that everybody doesn’t necessarily agree,’ Sanders explained. ‘We’re not going to get into the details on the specifics of what we will propose, but we expect that to be part of the conversation tomorrow.’

Yesterday, Sanders said that Trump had not ‘downgraded’ his proposal.

‘The president is still supportive of the concept,’ she said, as a weekend meeting with the National Rifle Association that was kept off Trump’s public schedule came to light.

The NRA does not support new age restrictions on firearms sales and its spokeswoman suggested Sunday that Trump was not firmly committed to his position.

‘These are just things that he’s discussing right now,’ spokesman Dana Loesch said during an appearance on ABC News.

Sanders told reporters on Monday that it ‘would be ridiculous’ to intimate that Trump had been influenced by the powerful gun group that opposes the restrictions ‘considering the number of individuals he’s met with that come from both the far left to the far right, and a lot of those in between.’

She said Trump plans to continue his talks with a lawmakers this week in meetings at the White House and would ultimately base his decision on what is outlined in legislative text.

‘In concept, the President still supports it, but in terms of legislation, we’d need to see what that looks like before we weigh in further,’ Sanders said.