Trump: I love NASCAR because they ‘stand for playing of national anthem’

President Donald Trump jump-started his old battle with the NFL on Monday when he congratulated race car drivers as patriots who stand for the playing of the ‘Star Spangled Banner.’

‘One thing I love about NASCAR is they do indeed stand for the playing of the National Anthem. They do indeed,’ the president said as he welcomed NASCAR Cup Series champion Martin Truex Jr. and his team to the White House.

‘Somebody said ‘maybe you shouldn’t say that, it’ll be controversial’ and I said ‘that’s okay, NASCAR’s not going to mind it at all.’ Right fellas? They don’t mind it at all,’ Trump added.

Trump spent the last football season — a game known as America’s sport — blasting players who took a knee during the playing of the national anthem. In football, the taking of a knee signals an end to the play.

NASCAR Cup Series champion Martin Truex Jr. and his racing team shoot a selfie with President Donald Trump as the president welcomes them to the White House on Monday. 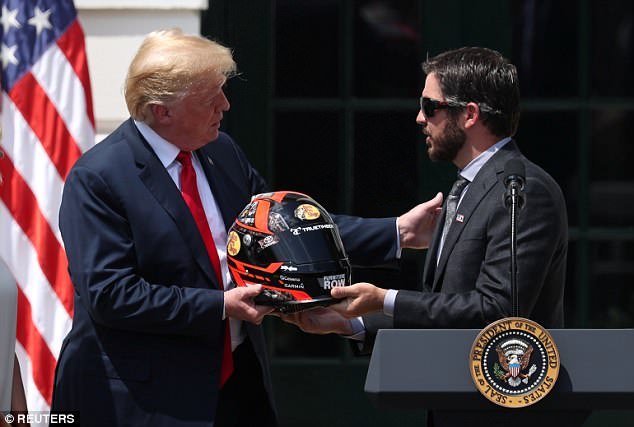 Early in the 2017 football season Trump called on Americans to boycott football games due to the ‘take a knee’ controversy.

But Trump appeared to enjoy himself on a warm and sunny day in the White House Rose Garden on Monday, joking with the NASCAR champion and giving a big grin when he took a selfie with the team.

And it wasn’t the first time he praised the sport for its patriotism.

‘So proud of NASCAR and its supporters and fans. They won’t put up with disrespecting our Country or our Flag – they said it loud and clear!’ he tweeted in September of last year.

The president also admired Truex’s neon orange champion stock car, which was parked nearby, and joked about using it to escape the White House.

‘Your car looks truly amazing. I want to get in that thing and just drive away,’ he said. 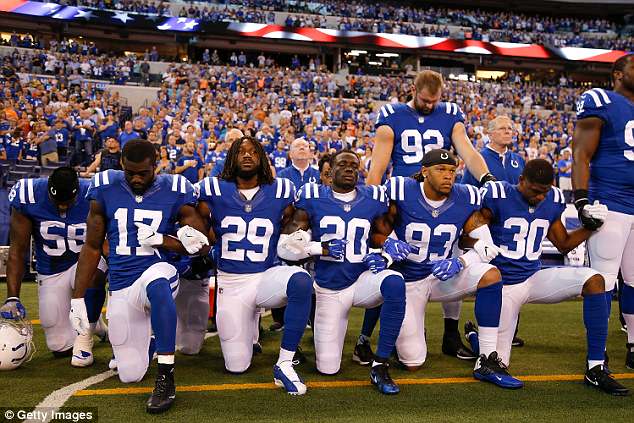 At their September 24 game, members of the Indianapolis Colts stand and kneel for the national anthem prior to the start of their game with the Cleveland Browns. President Trump blasted players for doing so, saying they were ruining the game. 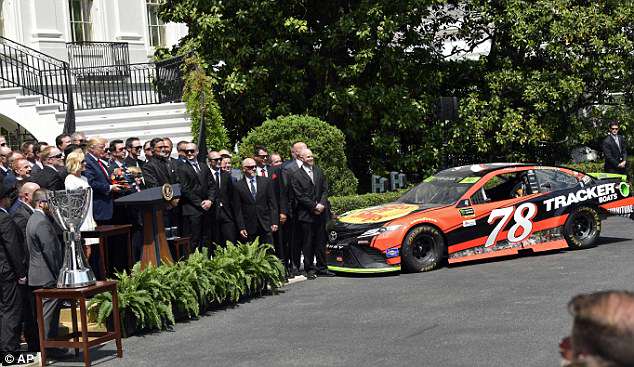 President Donald Trump holds a racing helmet he was given as a gift as he poses with 2017 NASCAR Cup Series champion Martin Truex Jr., and his team. The president also admired Truex’s bright orange racing stock car.

Trump noted he’s a big fan of the sport. He gave a shout-out to NASCAR CEO Brian France, who endorsed Trump during the 2016 campaign, a fact the president remembered.

‘Brian has been with us since the beginning,’ he said.

Pollex was diagnosed with Stage 3 ovarian cancer in 2014 and has been very public about her battle with the disease.

She revealed last summer a recurrence necessitated surgery to remove her spleen and later noted she finished her final round of chemotherapy in February.

‘She is the love of Martin’s life,’ Trump said adding that she battled cancer with a ‘beautiful’ and ‘tender’ smile.

‘You are Sherry strong,’ he told her.

Truex Jr., the son of racing champion Martin Truex Sr., thanked the president for hosting his team and presented him with a black and neon orange racing helmet.

Meanwhile, after doubts they would make an appearance, the Super Bowl-champion Philadelphia Eagles have committed to visiting the White House on June 5.

It’s traditional for champions of various sports to visit the White House and let the president praise their victory. 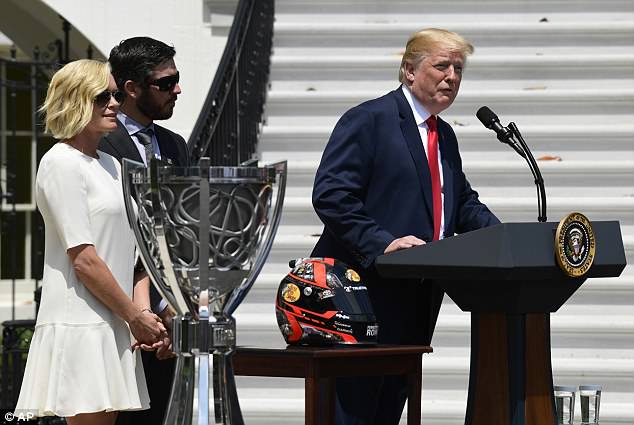 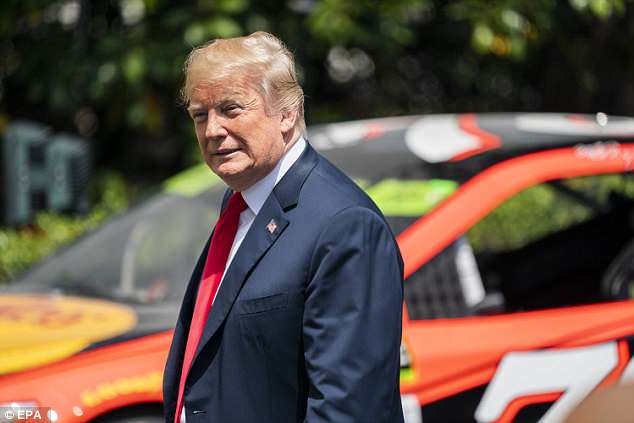 President Donald Trump admired Martin Truex Jr.’s racing stockcar during a Rose Garden event celebrating the champion and joked ‘I want to get in that thing and just drive away.’

Given the criticism Trump threw at football players last season, there was doubt the team would attend, particularly after the New York Times reported in April that several NFL owners expressed concerns about Trump’s presidency. Some Eagles players have said they will not be present with their team mates.

And, in February, the N.B.A. champion Golden State Warriors skipped their White House visit after several players publicly expressed concerns about making one, which led to Trump disinviting the team.

Instead the team spent their D.C. trip performing charity work and by taking local children to the National Museum of African American History and Culture.

Viewership for the 2017 football season declined for the second year in a row.

In September, Trump charged football players with hurting the game by kneeling during the ‘Star Spangled Banner’ and called on fans to leave the stadium if that happens.

In October, Vice President Mike Pence left a game between the Indianapolis Colts and the San Francisco 49ers on Sunday after some players took a knee during the anthem.