Trump insists he will leave the White House peacefully if he wins – but it would be bad for the U.S.

President Donald Trump has blasted Joe Biden as being ‘not all there’ for claiming that he would refuse to leave the White House if he fails to win a second term.

In an interview with Fox News aired on Friday, Trump told host Harris Faulkner that he would leave the Oval Office peacefully if Biden wins but that he believed it would be a ‘very sad thing for our country’.

Trump also accused Biden of hiding in a ‘sanctuary city’ in his basement.

His comments were in response to claims made by Vice President Biden that the military would have to force Trump to leave if he lost and that the president would try to ‘steal’ the election.

Faulkner asked Trump whether he had heard Biden’s comments during the 20-minute interview which mainly focused on race relations in the United States and the president’s response to the recent weeks of civil unrest.

‘Look, Joe’s not all there, everybody knows it and it’s sad when you look at it and you see it, you see it for yourself,’ Trump answered.

‘He’s created his own sanctuary city in that basement, wherever he is, and he doesn’t come out.’

Biden, the presumptive Democratic presidential nominee, has been continuing with his campaign from his basement as a result of the travel restrictions and shutdowns implemented because of the coronavirus pandemic.

Trump on the other hand has made plans to start back up his rallies on June 20.

The president went on to say that he would leave office peacefully if he lost in November and would move onto another endeavor.

‘I think it would be a very be a very sad thing for our country,’ he added of a potential loss for his reelection campaign.

In her question, Faulkner had been referring to comments recently made by Biden in which he claimed that Trump would ‘try to steal this election’.

He alleged that the president would do so by attempting to suppress voting, pointing to the unproven claims made by Trump that mail-in voting could bring massive fraud.

Democrats already accused Republicans in Georgia of voter suppression during the state’s primary on Tuesday, noting most of the problems were in heavily black areas. 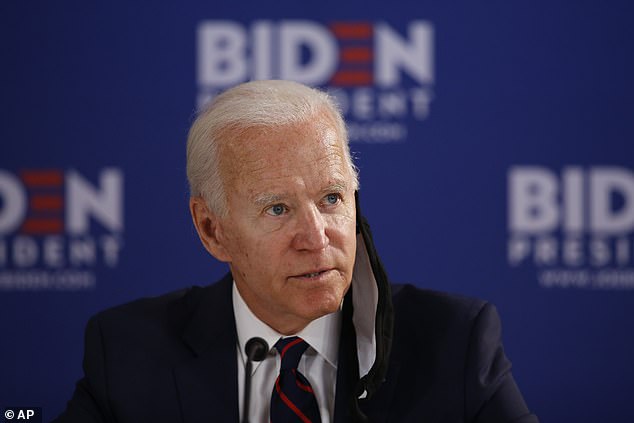 Democratic presidential candidate, former Vice President Joe Biden told The Daily Show that his ‘greatest concern’ is that ‘this president is going to try to steal this election’ 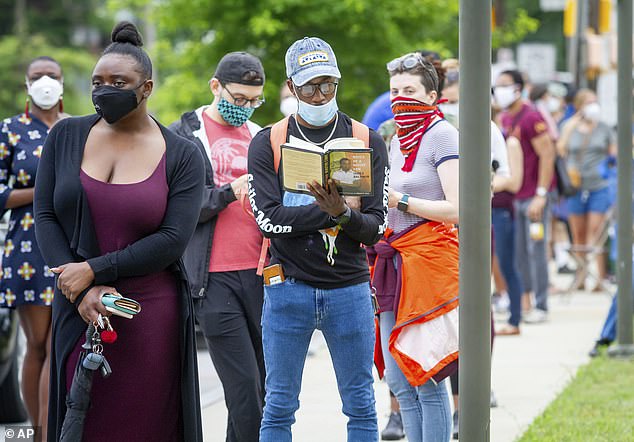 Democrats accused Republicans in Georgia of voter suppression during the state’s primary on Tuesday, noting most of the problems were in heavily black areas; above a voter reads a book while waiting in line to vote in a line stretched around the Metropolitan Library in Atlanta

‘This is a guy who said that all mail-in ballots are fraudulent – direct voting by mail – while he sits behind the desk in Oval Office and writes his mail-in ballot to vote in the primary,’ he said, adding that his campaign had lawyers ready to step in and enforce voting rights.

Biden also addressed fears among Democrats that Trump would refuse to concede the election should the former vice president beat him in November.

He pointed to the former Joint Chiefs of Staff who have criticized Trump in recent days and said he was confident the military would escort Trump out of the White House should it come to it.

‘I was so damn proud to hear that four chiefs of staff coming out and ripping the skin off of Trump,’ Biden said.

‘I promise you; I am absolutely convinced they will escort him from the White House with great dispatch.’

Such a move would be unprecedented in American history. 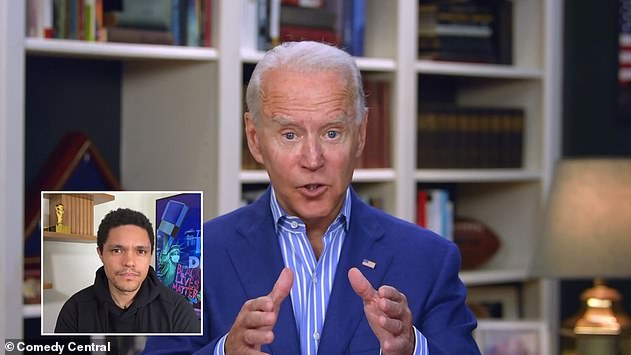 Biden’s comments had already been blasted by White House Press Secretary Kayleigh McEnany who said that it was a ‘ridiculous proposition’.

‘This president’s looking forward to November,’ McEnany said this week on ‘America’s Newsroom’ on Fox News.

‘This president’s hard at work for the American people and leave it to Democrats to go out there and grandstand and level these conspiracy theories.’

‘This is just another brainless conspiracy theory from Joe Biden as he continues to try to undermine confidence in our elections,’ he said in a statement.

‘It was the Obama Administration that tried to subvert an election by spying on the Trump campaign in 2016 and Biden himself was part of the effort to sabotage the incoming Trump Administration because they couldn’t live with President Trump’s victory. President Trump has been clear that he will accept the results of the 2020 election.’

In the first part of the Fox interview on Friday, President Trump repeated a claim that he had done more for black Americans than any other president. 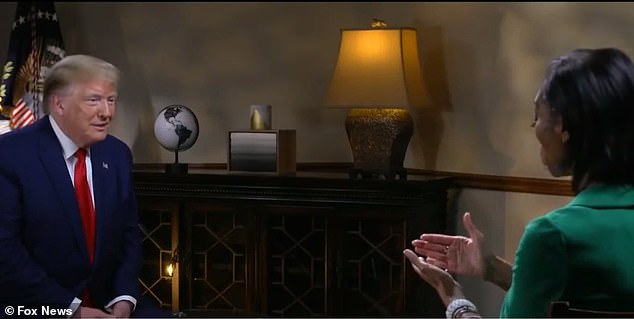 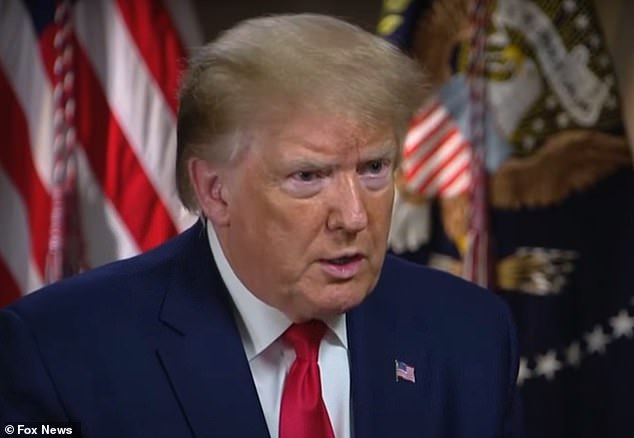 ‘So, I think I’ve done more for the Black community than any other president. And, let’s take a pass on Abraham Lincoln because he did good, although, it’s always questionable, you know, in other words, the end result,’ he said.

Faulkner interrupted, ‘Well, we are free, Mr. President. So, he did pretty well.’

Speaking about the recent protests sparked by the deaths of George Floyd and Breonna Taylor at the hands of the police, Trump added that it was giving the country a ‘ glimpse of liberal policies’.

‘It was all very liberal mayors, radical left mayors, all of these places,’ Trump said of the places where peaceful protests had at times turned to violence.

‘It was not that they were not in Republican cities. They were all in cities that frankly, I think I have a chance to win many of those cities. But these were all cities run by radical lefts Democrats. And I think it’s a very sad thing that would happen.’