Dr. Sean Conley said in a Thursday memo that Trump weights 243 pounds, which is four over the 239 that the president weighed in at last year.

That gives him a Body Mass Index, BMI, of 30.4 — a height and weight radio that makes him obese by the National Institute of Health’s standards.

It was just enough for the president to be designated ‘obese’ by the government’s standards.

Conley said that no other major changes to his medical or surgical history took place and that routine labs were conducted during the four-hour physical at Walter Reed medical center that took place last Friday.

In a letter to the president’s chief spokeswoman, Conley said that Trump is ‘in very good health’ and expected to ‘remain so for the duration of his Presidency, and beyond.’ 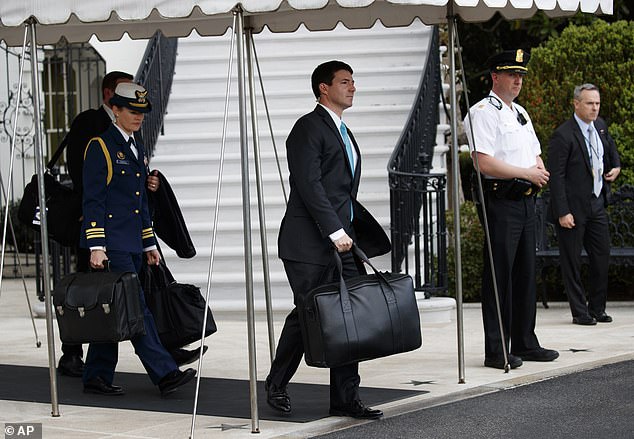 In a letter to the president’s chief spokeswoman, Conley said that Trump is ‘in very good health’ and expected to ‘remain so for the duration of his Presidency, and beyond.’

Additional reports and recommendations for the 72-year-old president who weighed in at 239 pounds at the time of his last check-up were still being worked up, Conley said.

‘The President is very grateful for the outstanding care he received today, and he especially wants to thank all the doctors, nurses, enlisted and civilian staff who participated,’ Conley wrote. 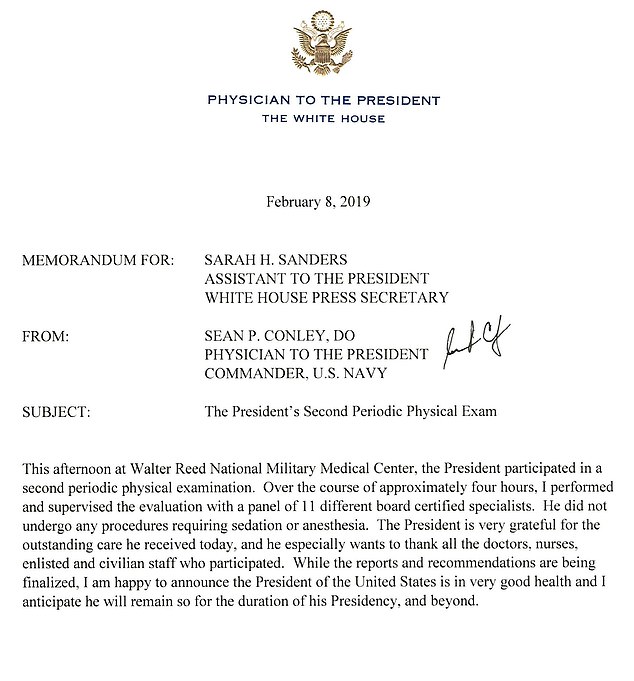 Conley did not provide any details about Trump’s health in the letter the White House provided to press early Friday evening, aside from his assessment that the president is under no reasonable threat of developing a life-threatening condition.

The results of Trump’s last physical were disclosed by his doctor at a televised briefing for the press, where the president’s doctor at the time, Ronny Jackson, made comments about his patient’s health that were considered to be hyperbolic.

He said that the president’s ‘good genes’ had kept him in ‘excellent’ health, even though he admitted Trump need to shed some pounds.

The president was deemed to be overweight, by government standards, but not quite obese.

Jackson put him on a diet and exercise plan and gave him a goal of losing 10 to 15 pounds.

The White House admitted on the eve of his Friday physical, however, that the president hasn’t always followed it.

‘The President received a diet and exercise plan last year after his annual physical, but the President admits he has not followed it religiously,’ White House spokesman Hogan Gidley told CNN. 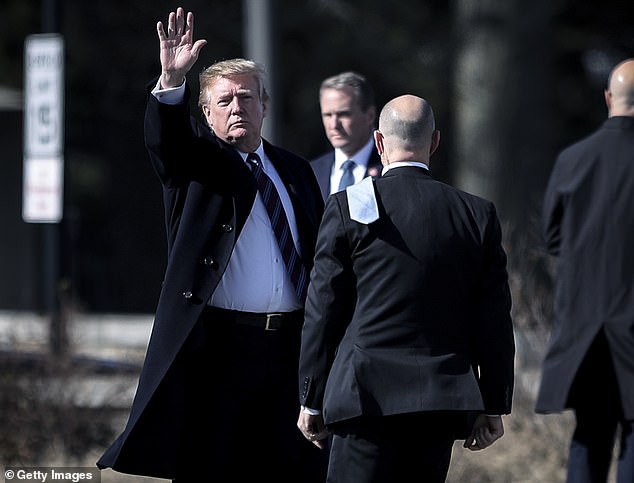 President Trump is submitting to a four-hour physical at Walter Reed medical center this afternoon, fulling a mandate that he undergo an assortment of tests once annually 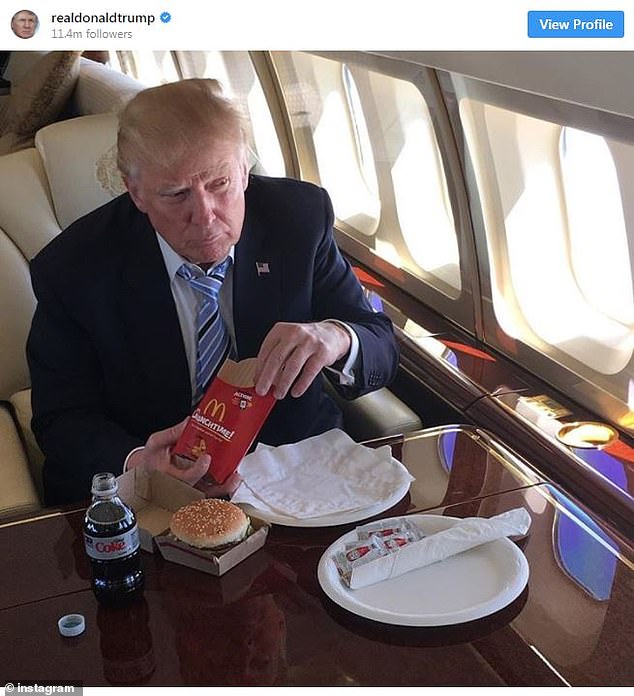 TYPICAL MEAL: Trump’s typical meal on the campaign trail consisted of a Diet Coke, french fries and a Big Mac 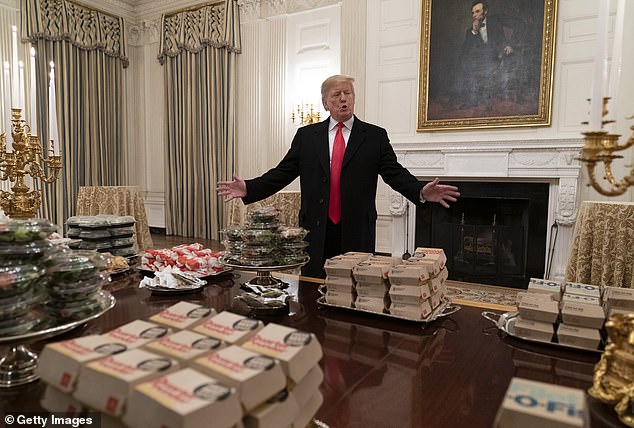 A FEW OF MY FAVORITE FOODS: President Trump ordered in fast food for the Clemson Tigers during a White House visit last month 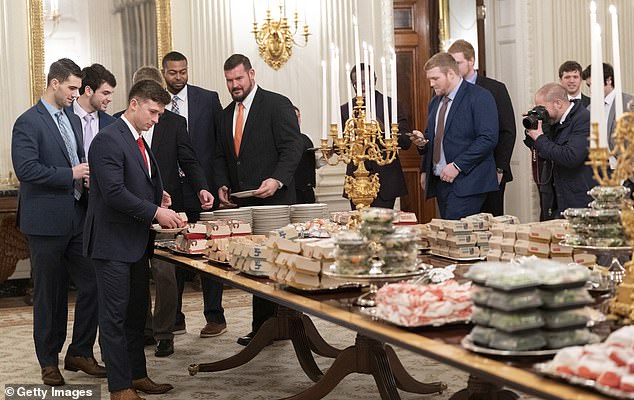 The college football players came amid the government shutdown, when White House chefs were furloughed

The U.S. president is a known lover of fast food who consumed McDonald’s regularly on the campaign trail.

He paid out of pocket last month for the Clemson Tigers to devour fast food when  the 2018 College Football Playoff champions visited the White House amid the partial government shutdown when serving a large meal cooked by staff was out of the question.

‘We ordered American fast food. Paid for by me. Lots of hamburgers, lots of pizza, I think they’d like it better than anything we could give,’ Trump told reporters in January. ‘We have some very large people that like eating, so I think we’re gonna have a little fun.’

Trump brought in Big Macs from McDonald’s and burgers from Wendy’s and Burger King, along with Domino’s pizza and french fries.

‘We have pizzas, we have 300 hamburgers, many, many french fries, all of our favorite foods. I want to see what’s here when we leave, because I don’t think it’s going to be much,’ he told reporters as he showed off the food at the start of the event. 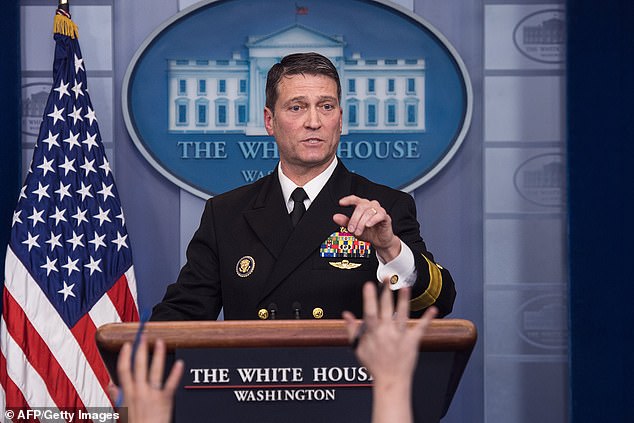 Rear Admiral Ronny Jackson speaks at a press briefing at the White House in January of 2018. Jackson was Trump’s medical doctor at the time. He put him on a diet and exercise plan

His choice of fast food for the event was unusual, but it is the president’s favorite.

The New York Times even dubbed him the fast food president once.

‘On Trump Force One there were four major food groups: McDonald’s, Kentucky Fried Chicken, pizza and Diet Coke,’ they wrote.

They recalled that Trump would have ‘two Big Macs, two Filet-O-Fish, and a chocolate malted’ shake on regular basis.

Lewandoski later clarified to CNN that Trump skipped the carbs, and that’s why he ordered so many sandwiches.

‘Well, he never ate the bread, which is the important part,’ Lewandowski said. ‘He was busy campaigning. We didn’t have time to sit down for a meal.’

During the campaign, Trump posted photos of his fast food meals on social media: eating Kentucky Fried Chicken (with a knife and fork) or a McDonald’s hamburger with fries.

In May 2015, while campaigning the president told DailyMail.com that he ate fast food because ‘it’s quick,’ as his ex-campaign manager later wrote about. 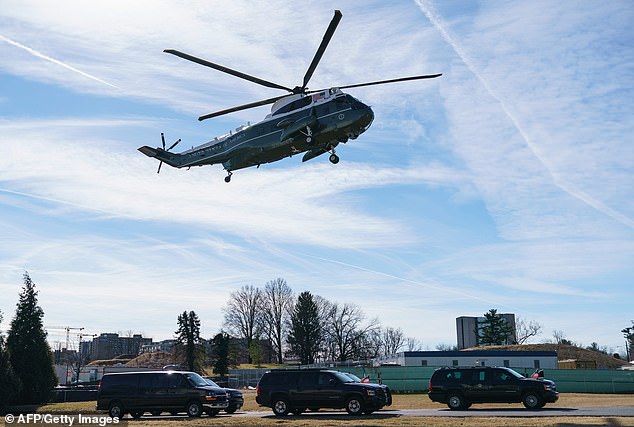 Marine One, carrying Donald Trump, lands at the Walter Reed National Military Medical Center in Bethesda, Maryland on Friday for the president’s physical

Jackson, who served as physician to the president before and was named medical adviser to him this month, gave Trump an ‘excellent’ report on his health after his last physical exam.

He told reporters during a press briefing at the height of speculation that Trump was in mental decline that he passed a cognitive test with flying colors and had such good genes that he could have lived past the age of 200 had he taken better care of himself.

The medical doctor who worked on Barack Obama’s team, and was later nominated by Trump to be his Veteran’s Affairs secretary, acknowledged that Trump needed to lose weight, however.

‘I think a reasonable goal over the next year or so would be to lose 10 to 15 pounds,’ he said. ‘We talked about diet and exercise a lot. He is more enthusiastic about the diet part than the exercise part, but we’re going to do both.’