Trump is PAYING FOR the McDonald’s, Wendy’s, Burger King, and Domino’s brought in for Clemson Tigers

President Donald Trump says he nearly fed hungry football Clemson players salads prepared by the first lady but decided to purchase them fast food, instead, for a White House celebrating their national title.

Trump paid for the food smorgasbord was served to the Clemson Tigers when the 2018 College Football Playoff champions visited the White House on Monday evening.

‘We ordered American fast food. Paid for by me. Lots of hamburgers, lots of pizza, I think they’d like it better than anything we could give,’ Trump told reporters when he arrived at the White House after speaking to farmers in New Orleans.

‘We have some very large people that like eating, so I think we’re gonna have a little fun,’ said the billionaire president, who is a fast food fan. 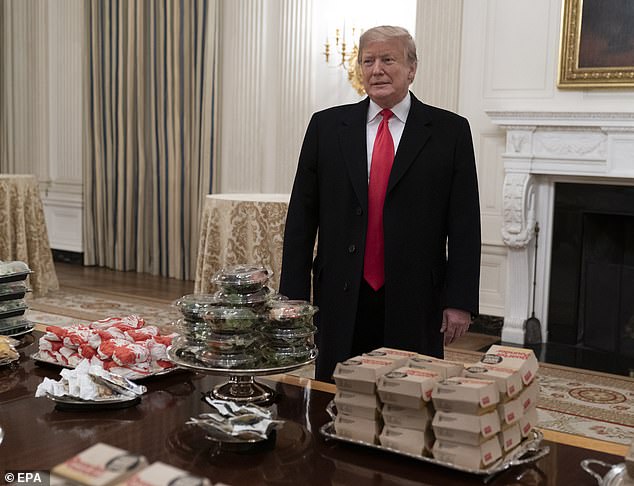 Trump paid for the hamburgers and pizza served at the reception 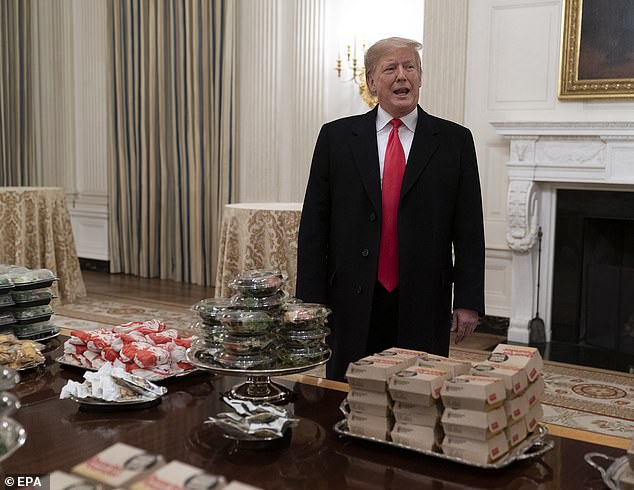 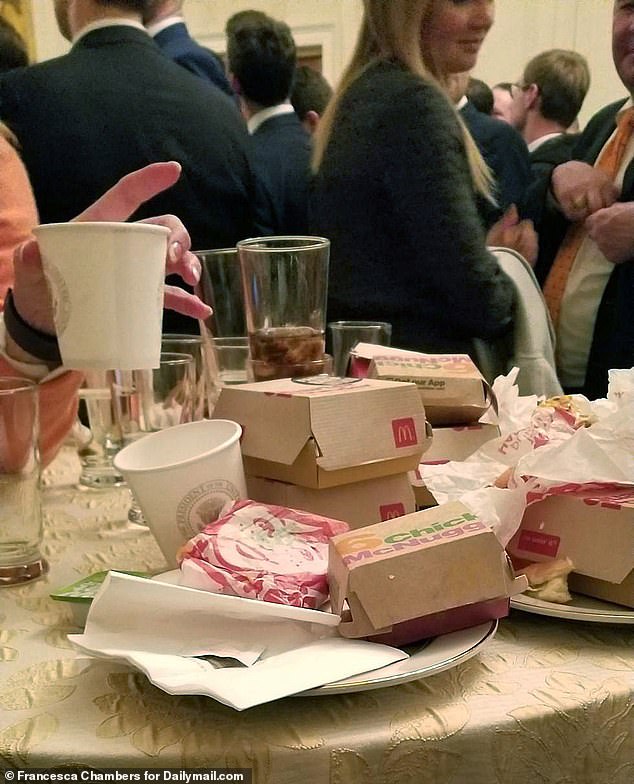 After math of the food served at the reception

At the reception, Trump stood behind a table piled high with burgers from McDonald’s, Wendy’s, and Burger King. Another table in back was covered with Domino’s pizza and fries.

‘We have pizzas, we have 300 hamburgers, many, many french fries, all of our favorite foods. I want to see what’s here when we leave, because I don’t think it’s going to be much,’ he told reporters.

‘The reason we did this is because of the shutdown. We want to make sure that everything is right, so we sent out, we got this. And we have some wonderful people working in the White House. They helped us out with this,’ he added.

Trump explained that this was ‘great American food’ for the football players and when asked his favorite, he said he liked them all.

‘If it’s American I like it. It’s all American stuff,’ he said. 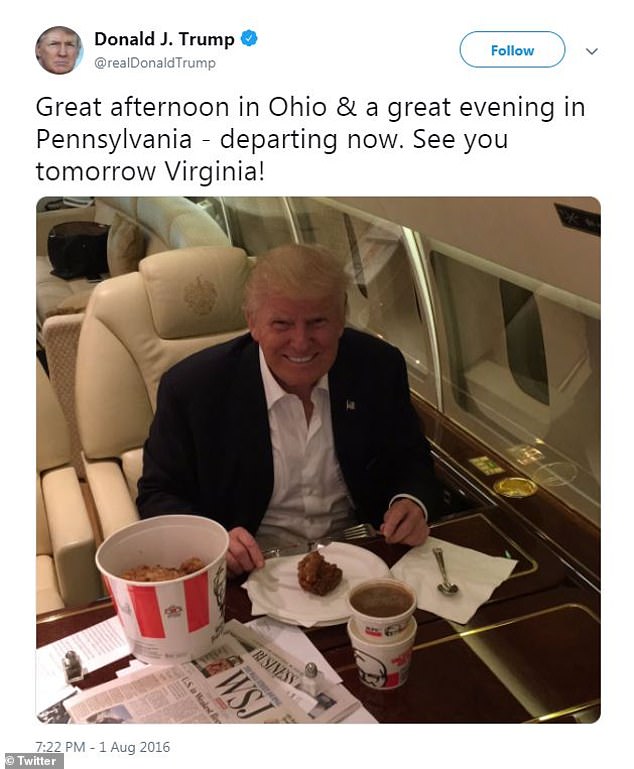 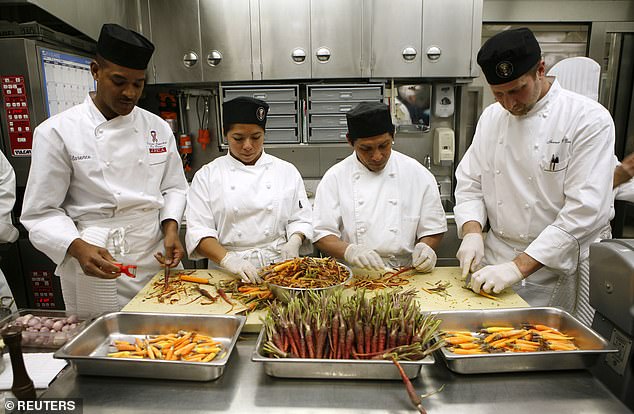 White House kitchen staff in 2009 preparing for a Governors’ dinner

The Clemson players came into the East Room as a jazz rendition of Michael Jackson’s classic ‘Billie Jean’ played. Some of the players whooped as they saw the food.

White House press secretary Sarah Sanders said that most of the staff at the White House residence is furloughed due to the government shutdown, which means kitchen operations are limited.

‘The President wanted to host a fun event to celebrate the College Football National Champion Clemson Tigers. Because the Democrats refuse to negotiate on border security, much of the residence staff at the White House is furloughed – so the President is personally paying for the event to be catered with some of everyone’s favorite fast foods,’ she said in a statement.

Earlier in the day President Trump bragged about the menu for the evening’s event.

‘We’re going to serve McDonalds, Wendys, and Burger King with some pizza,’ the president told reporters at the White House Monday morning before he left for New Orleans. ‘I really mean it. It’ll be interesting. And I would think that’s their favorite food.’

The White House kitchen usually provides food for receptions in the Executive Mansion, as the state rooms in the White House are known.

But only 156 of 359 total full time employees in the Executive Mansion are working during the shutdown, according to a memo sent to the Office of Management and Budget about shutdown operations.

With three kitchens, up to five full time chefs plus support staff, the White House can serve dinner to as many as 140 guests and hors d’oeuvres to more than 1,000.

Receptions typically serve some type of food and drinks. Some holiday receptions have a buffet.

But food varies by the celebration.

In June, reporters caught sight of White House kitchen staff grilling leeks outside the mansion to serve at an Iftar dinner. 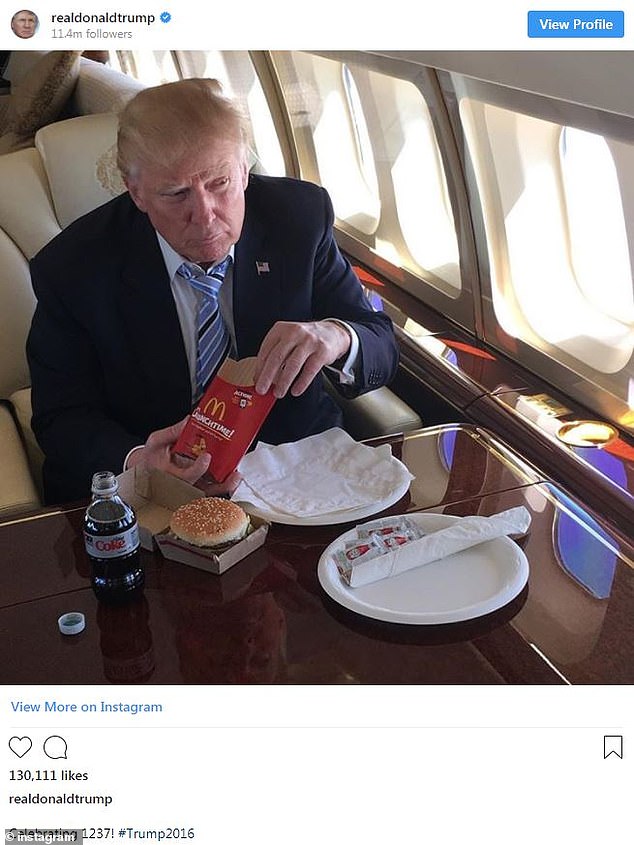 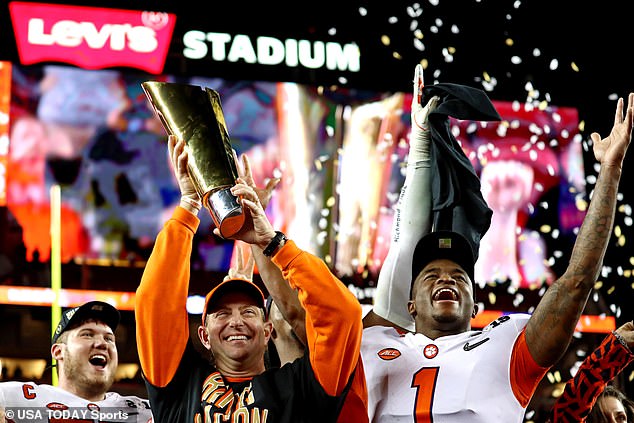 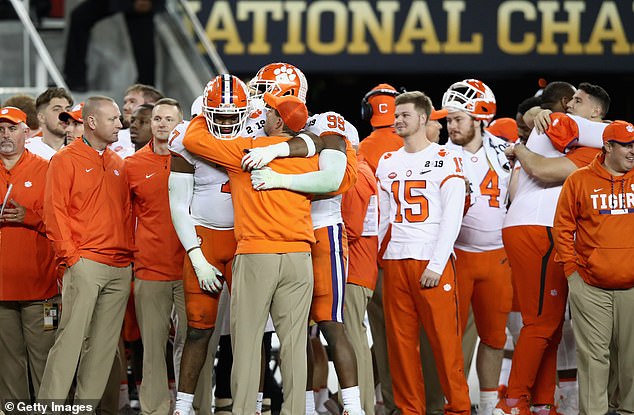 The choice of fast food for Monday evening is unusual but it is the president’s favorite food.

The New York Times’ even dubbed him the fast food president.

‘On Trump Force One there were four major food groups: McDonald’s, Kentucky Fried Chicken, pizza and Diet Coke,’ they wrote.

During the campaign, Trump even posted photos of his fast food on social media: eating Kentucky Fried Chicken (with a knife and fork) or a McDonald’s hamburger with fries.

In May 2015, while campaigning the president told DailyMail.com that he ate fast food because ‘It’s quick.’

He and his staff munched on food from Burger King on that flight in between campaign stops. His driver had made a drive-thru run after a speech in Sarasota, Fla.