Donald Trump took to Twitter to slam John Bolton and Democrats for the latest developments in his impeachment just moments after his first campaign rally since the trial started.

After the rally in New Jersey on Tuesday night, Trump tweeted that he wished former National Security Adviser John Bolton had come forward with his complaints when he being ‘very publicly terminated’.

The tweet comes just days after Trump slammed Bolton’s claims that he was instructed to withhold aid from the Ukraine. 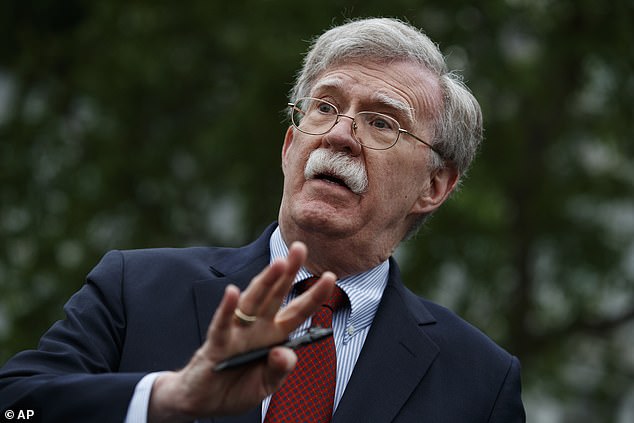 ‘Why didn’t John Bolton complain about this ‘nonsense’ a long time ago, when he was very publicly terminated,’ Trump said in the latest tweet. ‘He said, not that it matters, NOTHING!’

Prior to the post, Trump slammed Democrats for trying to pull a ‘con job’ with impeachment proceedings.

‘No matter how many witnesses you give the Democrats, no matter how much information is given, like the quickly produced Transcripts, it will NEVER be enough for them,’ he said in the late Tuesday tweet. ‘They will always scream UNFAIR. The Impeachment Hoax is just another political CON JOB!’

At his New Jersey rally, he let loose on his Democratic opponents, telling his supporters to ‘get rid of the clowns’.

The president wasted no time in going after Bernie Sanders and Elizabeth Warren in his remarks at a rally in Wildwood, where he welcomed Jeff Van Drew.

The congressman left the Democratic Party during the impeachment inquiry for the Republican Party, and was praised by Trump for leaving the ‘deranged’ Democrats.

Prior to the post, Trump slammed Democrats for trying to pull a ‘con job’ with impeachment proceedings

‘Get out and vote Republican. Get rid of these clowns,’ Trump told the crowd, who repeatedly cheered ‘USA, USA, USA.’

It was an usually short rally from the president, clocking in at 62 minutes. Trump typically speaks to his supporters for 90 minutes, at times longer.

In addition to its length, the rally was missing some of the hallmarks of a Trump event, including an attack on Hunter Biden (no mention of ‘where’s Hunter) and the crowd shouting ‘build the wall.’

The evening was a mix of attacks on his opponents and words of praise for his own accomplishments, which Trump claimed he did ‘solely’ rattling off a list that included criminal justice reform and the Space Force.

It took place after the president’s lawyers wrapped up his defense in his Senate impeachment trial and amid reports Republicans don’t have the votes to block Democrats from calling additional witnesses, which could drag on Trump’s trial for weeks.

Trump had strong words for the impeachment trial, railing against ‘demented hoaxes, crazy witch hunts, and deranged partisan crusades’ that he claimed Congressional Democrats are ‘obsessed’ with. 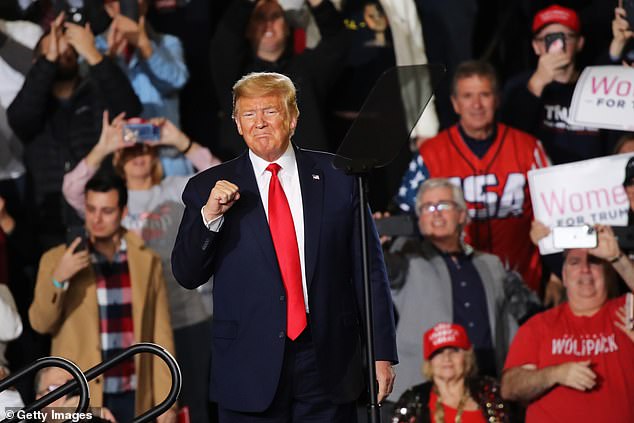 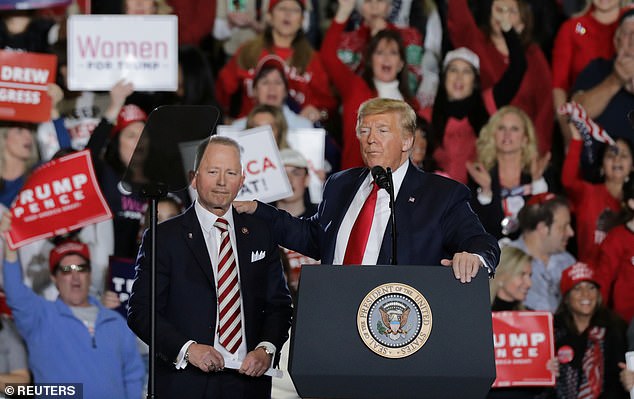 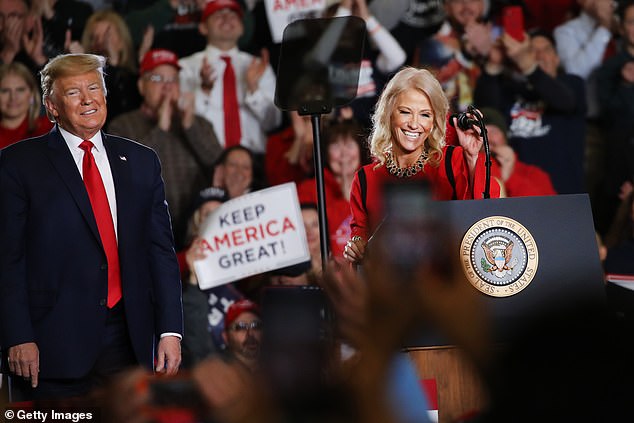 He did not mention his former National Security Adviser John Bolton, who claims in a new book that the president told him he wanted to with hold U.S. aid from the Ukraine until the country agreed to investigate Joe and Hunter Biden. Trump had denied the charge.

But for all his railing at his political enemies, Trump did not mention either Biden. His line – ‘where’s Hunter’ – was becoming a staple and crowd favorite at other campaign rallies.

The president claimed Democrats were trying to overturn the 2016 election with their impeachment inquiry – a theme his supporters have used time and time again.

‘They have spent the last three years, and probably even before I came down on that beautiful escalator with our beautiful future first lady, trying to overthrow the last election and we will make sure that they face another crushing defeat in the next election. We are going to have a victory that is even greater then 2016. This November, we are going to win back the House, we are going to hold the Senate, and we are going to keep the White House. The American people are disgusted by the Washington Democrats, you see it. You see it,’ he said.

He bragged about his accomplishments, including the USMCA trade deal he will sign on Wednesday at the White House and the killing of Iranian General Qasem Soleimani, and blasted Democrats in return.

Lawmakers on both sides of the aisle objected to the lack of information the administration gave Congress about the attack they claimed Soleimani was planning. Additionally Pelosi helped pass Trump’s trade deal in the House last month. 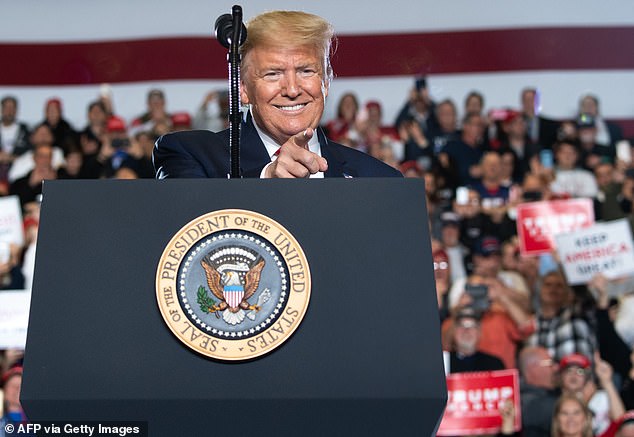 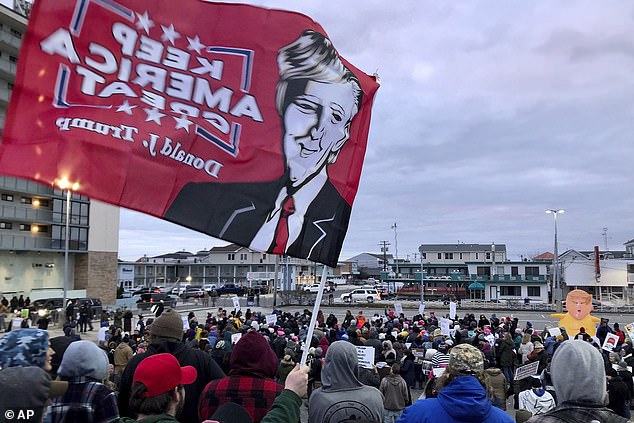 Supporters of President Trump on the New Jersey boardwalk 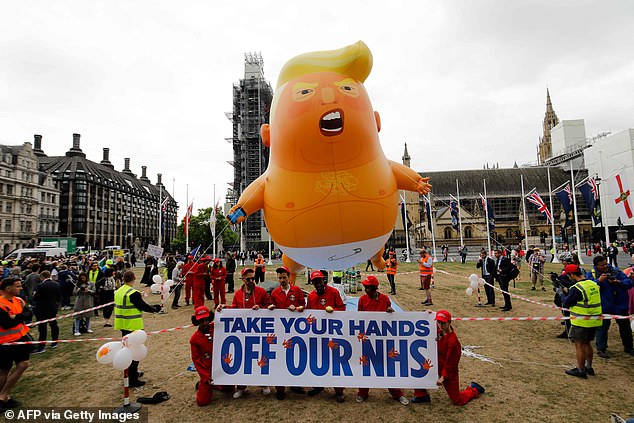 There were protesters at Trump’s rally in Wildwood, N.J.

Trump also went off on ‘Pocahontas’ as he calls Elizabeth Warren. He compared the size of his campaign rallies to hers.

‘We just had 175,000 people sign up,’ he said. The Wildwoods Convention Center has a capacity of 7,000. There were local reports of large crowds outside the center and supporters waving at the president’s motorcade as he drove through the streets of the boardwalk town but no number has been reported.

The president also claimed he could have filled up the Meadowlands Arena in East Rutherford, New Jersey, which has a capacity of 19,000.

‘We could have filled up the Meadowlands Arena two or three times. Maybe we will during the summer,’ he said.

The president got in a hit at his predecessor, referring to Barack Hussein Obama when he spoke about household income. Detractors pointed to Obama’s middle name as proof of a conspiracy theory Obama was born overseas and is a Muslim.

But he notably did not mention his new ‘vision’ for the Middle East that he revealed at the White House earlier that day. 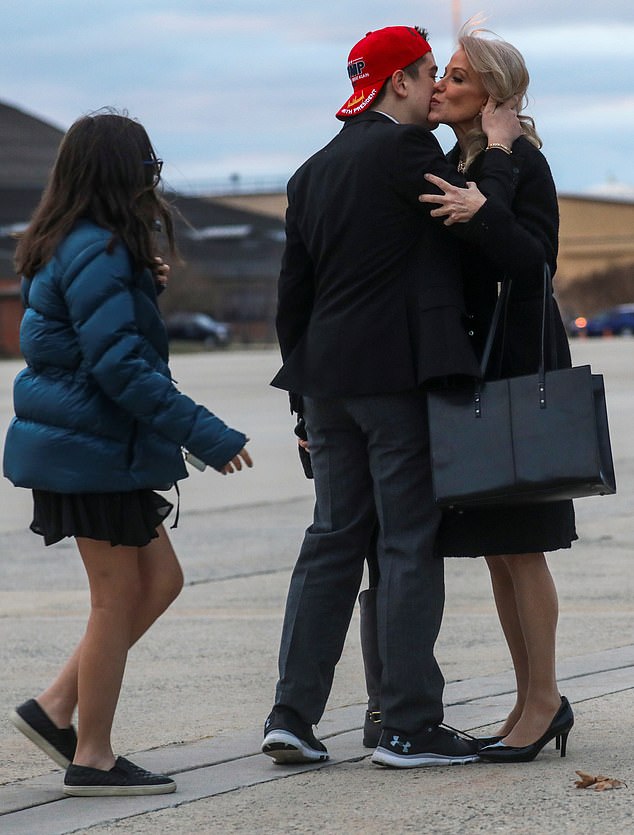 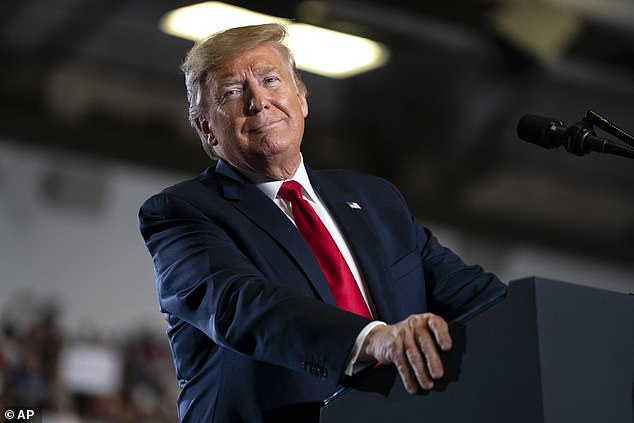 Trump, in his remarks, claimed voters were leaving the Democratic Party in droves

He also claimed voters are leaving the Democratic Party in droves.

‘Voters are making a mass exodus from that party and we are welcoming them to the Republican Party with wide open arms,’ he said.

He welcomed Congressman Jeff Van Drew to the stage as an example. Van Drew changed to the Republican Party during the impeachment process.

‘Jeff, he had the guts to defy the left-wing fanatics in his own party and to stand tall in defense of our constitution, our freedom, and democracy itself,’ he added.

The rally is a chance for Trump make his pitch for votes in the November election. Hillary Clinton won New Jersey in the 2016 presidential contest.

He praised the people of New Jersey and gave a shout out to state native Frank Sinatra. 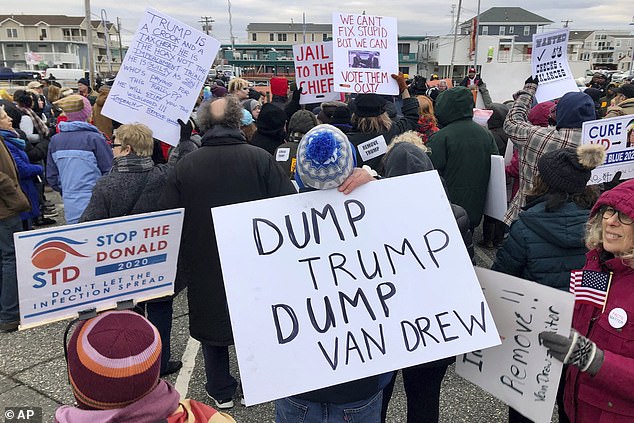 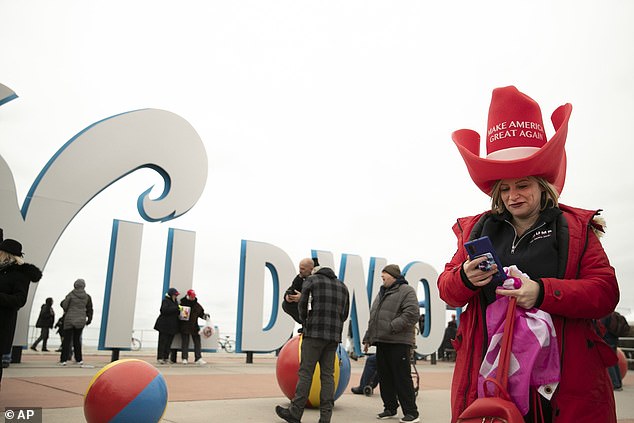 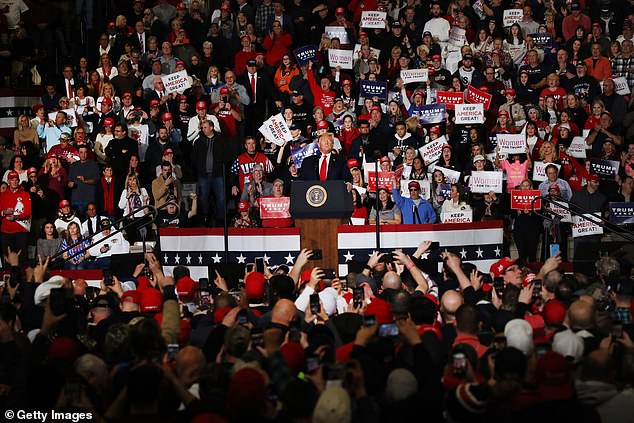 President Trump rallies New Jersey voters ahead of the 2020 election

The president touted his record on health care – speaking about the issue for several minutes – as polls show it’s a top issue for voters in November.

However, patients with pre-existing conditions were protected under the Affordable Care Act, passed by President Obama. Republicans have tried to dismantle that law.

He also talked up the strong economy, which is a central plank in his re-election campaign.

Trump threw plenty of red meat to his supporters, who cheered him on. There were shouts of ‘four more years’ through out the evening.

He talked about how he outlawed late term abortion, had criminal illegal immigrants locked up, and vowed to protect the Second Amendment right to own a gun.

He also claimed his border wall was being built.

He also claimed he was able to get criminal justice reform done when Presidents Obama or George W. Bush could not.

‘That’s why I always say you have to thank yourself because no one else is going to do it,’ Trump said.

Joining the president are some of the state’s big Republican stars, including former New Jersey Gov. Chris Christie and White House Counselor Kellyanne Conway, who was spotted bringing her children with her on Air Force One for the trip to her home state.

Trump brought Conway to the stage to speak for a few minutes but merely acknowledged Christie’s presence on the sidelines. 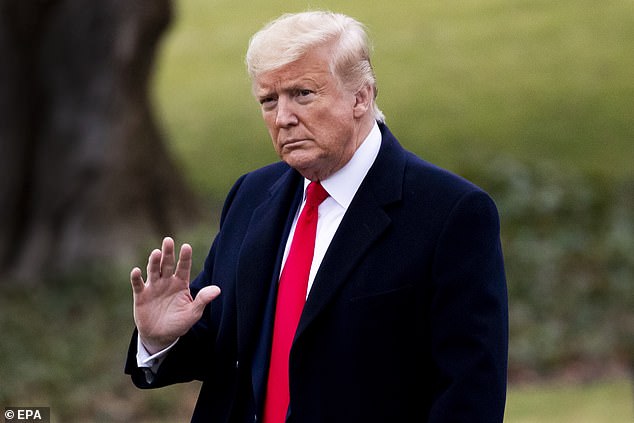 Donald Trump will hold his first campaign rally since his impeachment trial began in Wildwood, N.J., on Tuesday night 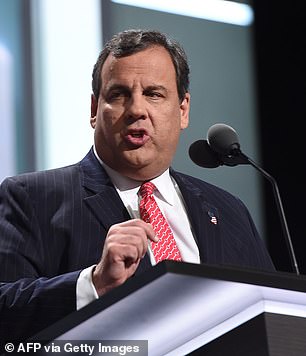 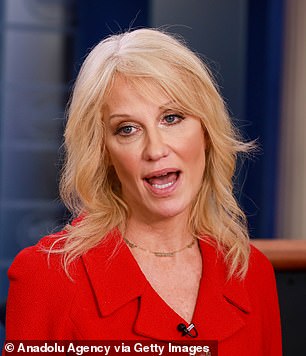 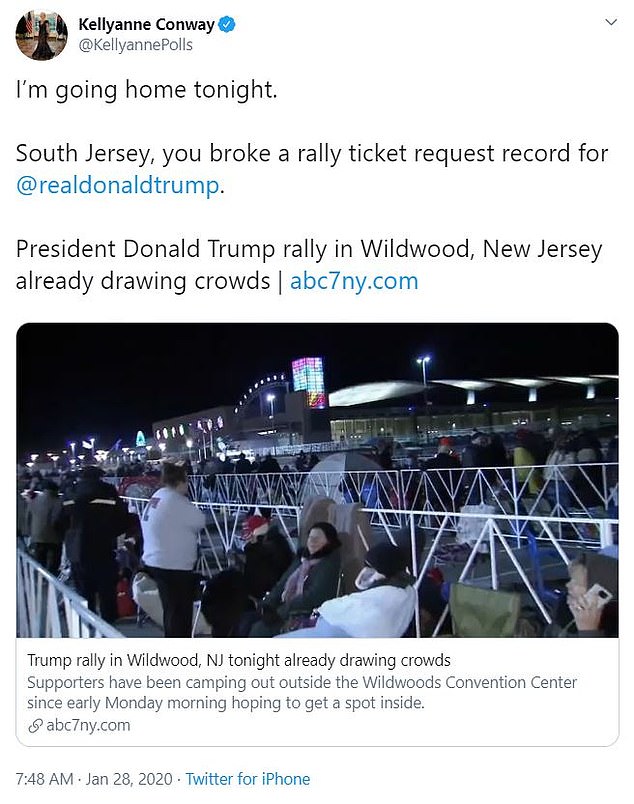 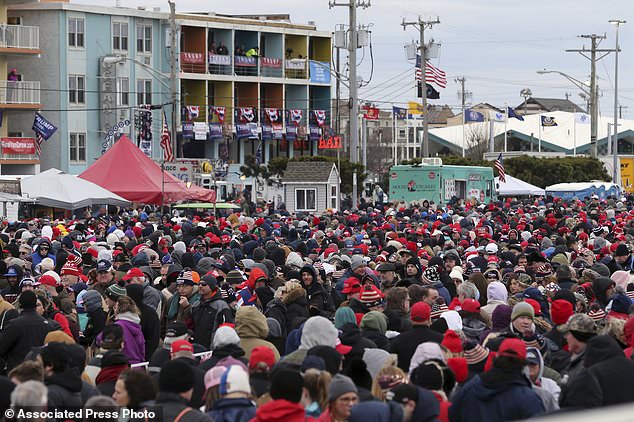 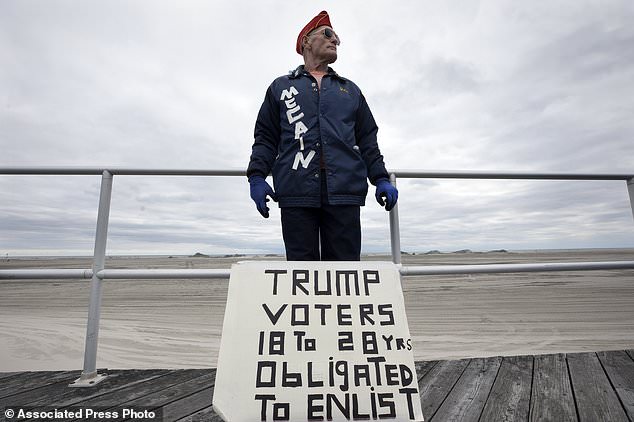 John Barker of Lakewood, N.J., stands on the Wildwood boardwalk with a sign asking young Trump supporters to serve in the military

The rally came about after Trump hosted Van Drew in the Oval Office last month in the wake of his party switch and pledged to hold a rally for him ahead of his election this fall. Van Drew was facing a tough GOP challenger before he changed parties. That candidate has since decided to run in another election contest.

Van Drew rode to New Jersey with the president on Air Force One.

There were around 2,000 supporters waiting in line at the Wildwoods Convention Center Tuesday afternoon, according to local reports, with only 30 porta potties for the crowd. 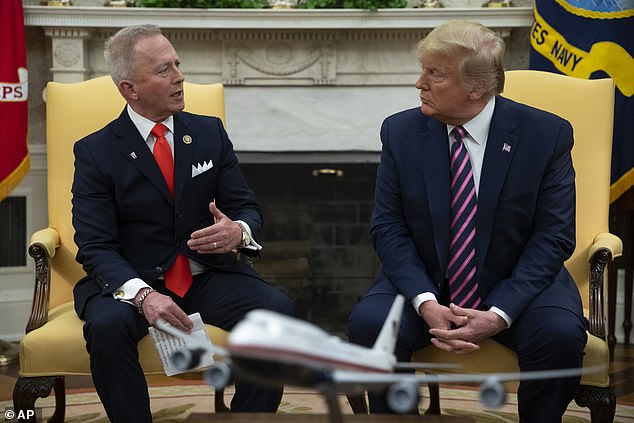 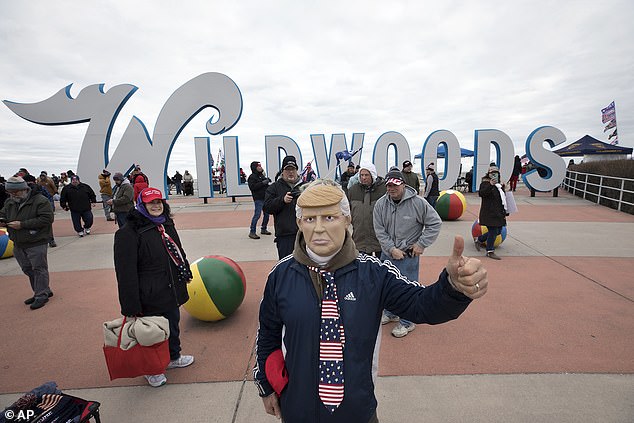 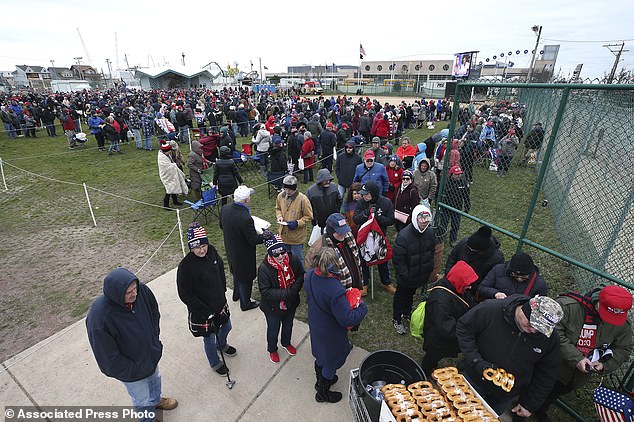 People stand in the cold in a field, as they line up to enter the Wildwoods Convention Center 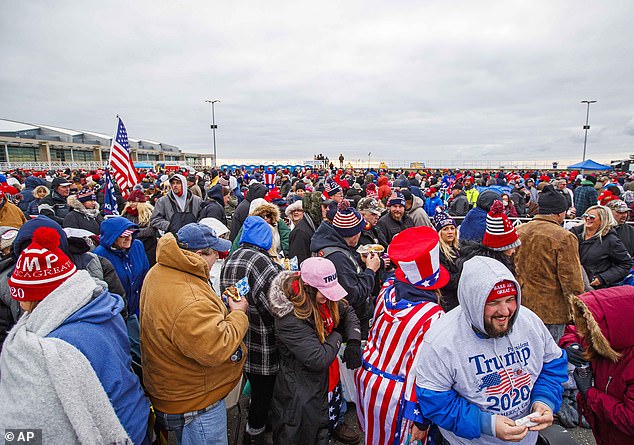 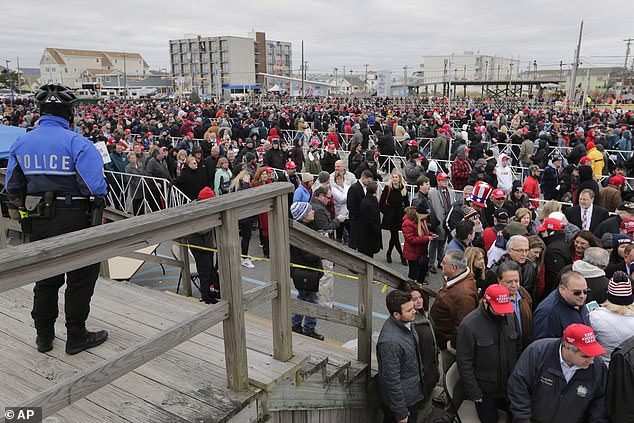 Police watch supporters waiting to get into Trump rally 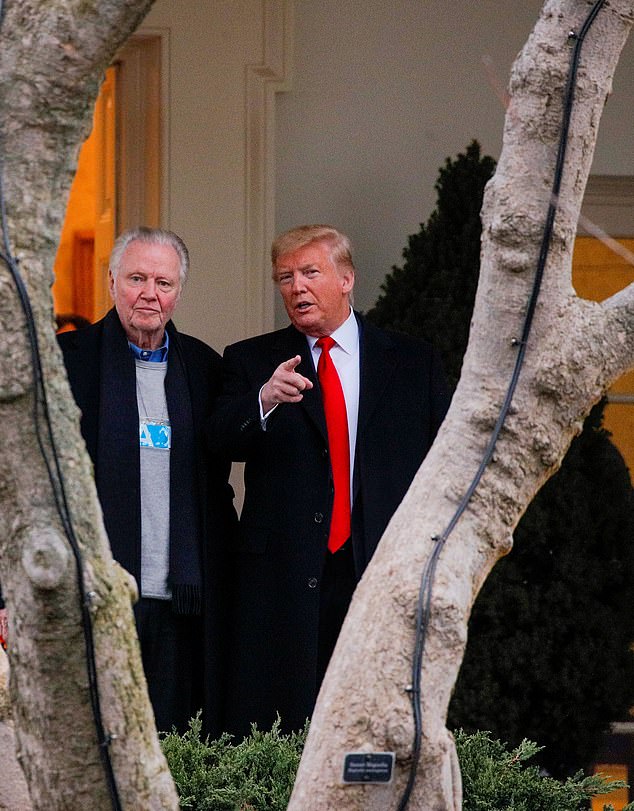 Wildwood is a New Jersey shore town where supporters camped overnight on the beach to get a spot in line for the rally.

It’s a rare visit by the president to the state and could be one of supporters few chances to see Trump.

The president met in the Oval Office with conservative actor Jon Voight before he left for his rally.

The two men stepped out of the Oval Office and spoke outside on its colonnade for a few minutes before the president departed. Voight did not travel with President Trump.

Last week Voight tweeted that he was offering ‘high prayers’ for the president during the impeachment scandal.