Donald Trump slammed Barack Obama in the midst of a tweet rampage Sunday in response to criticism from his predecessor of the federal response to the coronavirus pandemic.

The president took a hit at the former president and his No. 2, and presumed 2020 Democratic nominee Joe Biden, for their handling of the 2009 Swine Flu outbreak.

‘We are getting great marks for the handling of the CoronaVirus pandemic, especially the very early BAN of people from China, the infectious source, entering the USA,’ Trump touted on Twitter Sunday morning.

‘Compare that to the Obama/Sleepy Joe disaster known as H1N1 Swine Flu. Poor marks, bad polls – didn’t have a clue!’

About one year after Obama took office, the H1N1 pandemic hit the U.S. – and in October 2009 he declared the outbreak a national emergency.

The tweets and reposts covered a range of topics from slamming ‘fake news,’ to investigations involving Russian interference, to the DOJ dropping the Michael Flynn case, to the country beginning to reopen. 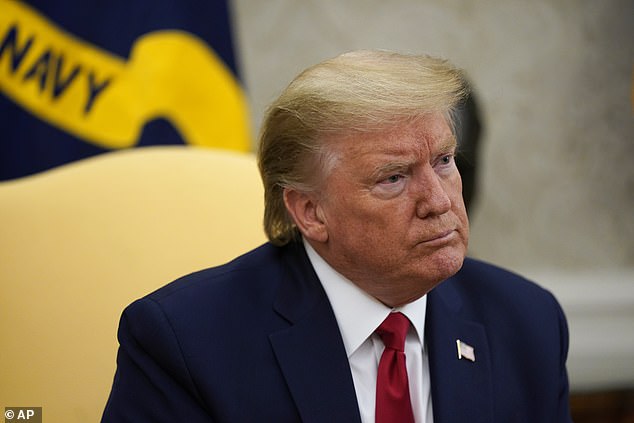 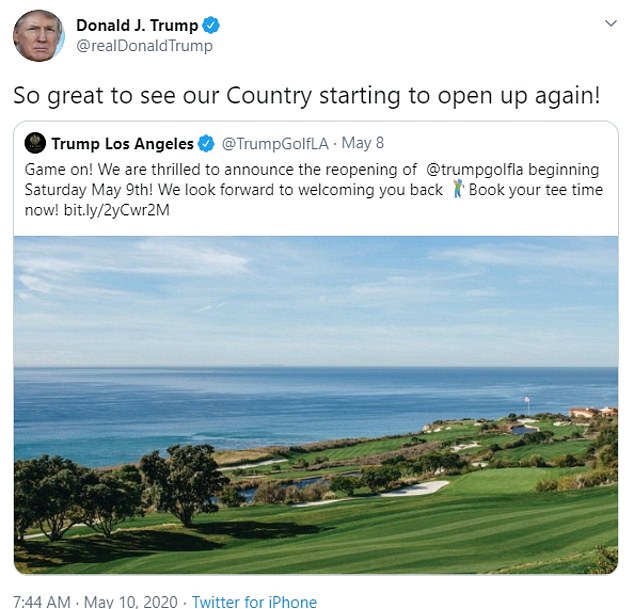 He touted the country beginning to end lockdowns and stay-at-home orders at the state and local levels by tweeting an image of his Los Angeles golf course, which is now reopened and accepting bookings

He ended the rant just after 8:00 a.m. Sunday wishing everyone a ‘HAPPY MOTHER’S DAY!’ 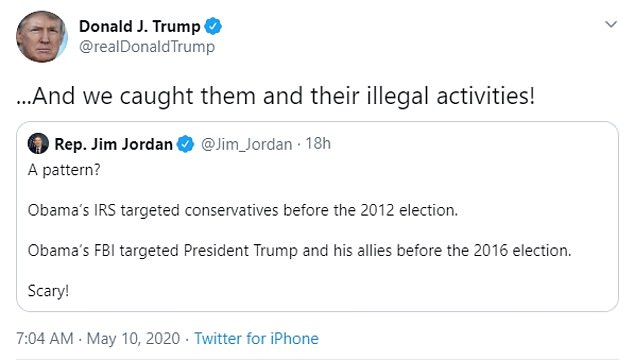 A few comments took aim at Obama and came just two days after the former president asserted Friday that the current administration’s response to the COVID-19 crisis has been an ‘absolute chaotic disaster.’

Flynn’s case was dropped last week, spurring Obama to claim during the private call – where he also insulted the president’s coronavirus response – that the U.S. ‘rule of law’ is at risk.

‘Trump also shared other tweets that highlighted supposed actions he says were problematic during Obama’s presidency.

Trump reposted the comment Sunday morning, adding: ‘…And we caught them and their illegal activities!’

Obama blamed the current occupant of the Oval Office and his allies for exacerbating ‘tribal’ tensions around the country during the COVID-19 pandemic, which he says has hampered the effort to reduce the total number of cases nationwide.

Audio of the web call where Obama made the comments was obtained by Yahoo News, who then released a report of the details of the call Friday.

‘What we’re fighting against is these long-term trends in which being selfish, being tribal, being divided, and seeing others as an enemy – that has become a stronger impulse in American life,’ the former president said.

‘And by the way, we’re seeing that internationally as well,’ Obama continued. ‘It’s part of the reason why the response to this global crisis has been so anemic and spotty.’

‘It would have been bad even with the best of governments,’ he claimed. ‘It has been an absolute chaotic disaster when that mindset – of ‘what’s in it for me’ and ‘to heck with everybody else’ – when that mindset is operationalized in our government.’

He also re-asserted his endorsement for his former vice president, and the presumed Democratic nominee: ‘That’s why, I, by the way, am going to be spending as much time as necessary and campaigning as hard as I can for Joe Biden.’

There’s currently more than 1.3 million cases of coronavirus and 78,000 deaths in the U.S. – and several state and local governments have begun reopening and ending lockdown and stay-at-home orders after months of economic downturn.

Trump boasted Sunday in one of his tweets, ‘So great to see our Country starting to open up again!,’ including an image of his Los Angeles club reopening for golfers.

Excluding campaign speeches during the 2018 midterm elections, Obama has largely been quiet since Trump took office and replaced him after defeating Hillary Clinton in 2016 – he has especially steered clear of directly criticizing the current president by name.

Obama’s comments on the Trump administration’s handling of the pandemic were a much sharper attack on his successor than he has issued in the past. 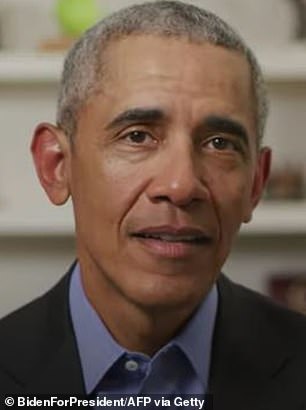 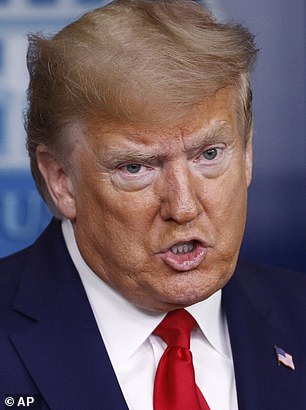 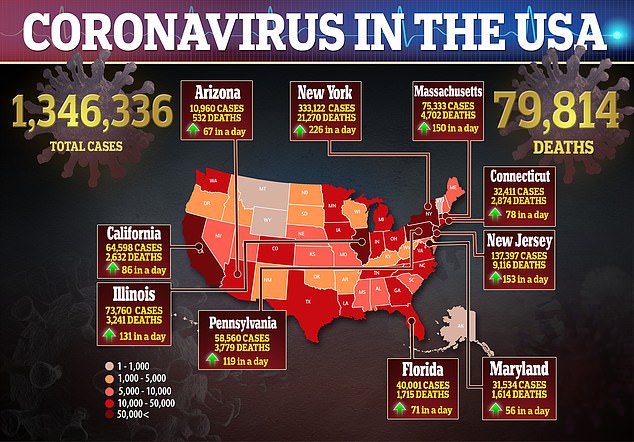 The claim comes as state and local governments begin to initiate and implement reopening plans as the death toll in the U.S. nears 80,000 and there are more than 1.34 million confirmed cases

Last month, Obama offered veiled criticism of Trump over the COVID-19 crisis, claiming that there was no ‘coherent national plan’ to address the outbreak.

‘While we continue to wait for a coherent national plan to navigate this pandemic, states like Massachusetts are beginning to adopt their own public health plans to combat this virus––before it’s too late,’ the former president tweeted.

Obama used the tweet to issue an attack on the president, but also praised Massachusetts for its response to the pandemic with a New Yorker article titled: It’s Not Too Late to Go on Offense Against the Coronavirus.

As several states continue to lament that they do not have the supplies to administer enough testing, some have taken matters into their own hands.

Massachusetts Governor Charlie Baker launched a plan for full-scale, statewide testing, which will be used to implement effective quarantine and treatment systems.

The state was able to increase the number of tests administered from just 41 on March 9 to more than eight thousand by April 17.

Obama also attacked his successor at the end of March as Trump signed the CARES Act to provide $2.2 trillion in economic stimulus and relief for Americans and small businesses.

‘We’ve seen all too terribly the consequences of those who denied warnings of a pandemic,’ the two-term Democrat tweeted last month. 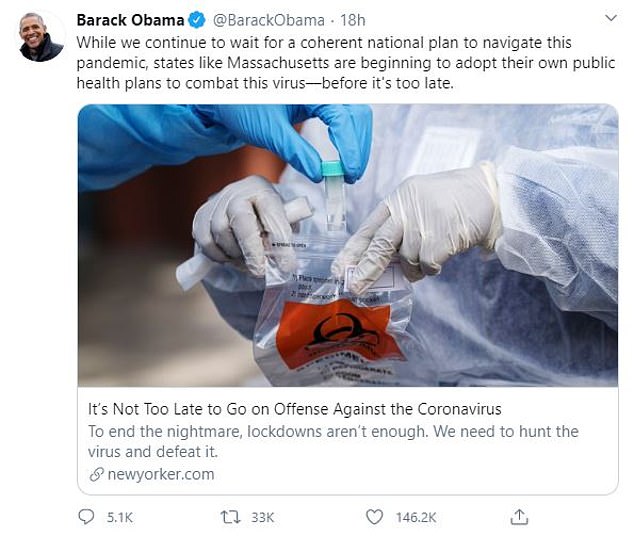 On April 22, Obama launched a veiled attack on Trump without using the president’s name, claiming there is no ‘coherent national plan’ on coronavirus response 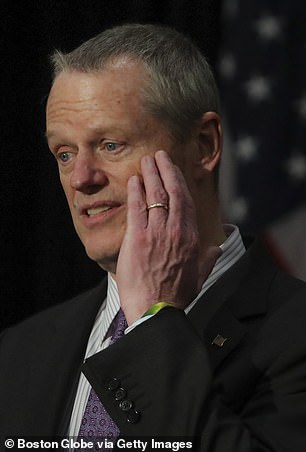 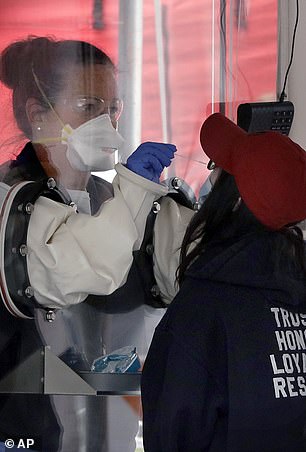 Obama also praised Massachusetts Governor Charlie Baker’s (left) response to the virus, and in his tweet linked to an article about the state dramatically increasing its testing capabilities

‘We can’t afford any more consequences of climate denial. All of us, especially young people, have to demand better of our government at every level and vote this fall,’ he continued at the time.

This election year has been upended by the pandemic. With no vaccine in sight and the number of cases climbing, some states have started to gradually reopen their economies while others have maintained a lockdown.

The Trump administration has been scrutinized for its response to the pandemic.

Reports in several media outlets indicated that Trump played down the severity of the coronavirus even while his own experts were urging him to take it seriously.

Top Trump administration officials like Health and Human Services Secretary Alex Azar and trade adviser Peter Navarro reportedly sounded the alarm about a pandemic reaching American shores as early as late January, but the president failed to heed the warnings.

Critics said the valuable time that was lost could have been used to ramp up testing as well as provide medical professionals adequate supplies of personal protective equipment in order to better deal with the pandemic.

Trump has also been criticized for mixed messaging – touting social distancing and preventative measures on the one hand but then urging his supporters to ‘liberate’ states through mass demonstrations on the other.

The president has also made comments that have prompted mockery and scorn from the public, including his suggestion that cleaning disinfectants could be ingested into the body in order to treat COVID-19.

Trump, for his part, has claimed that his decision to shut down travel from China saved lives, though the administration has allowed flights from China carrying American citizens and legal residents to continue landing in the country. 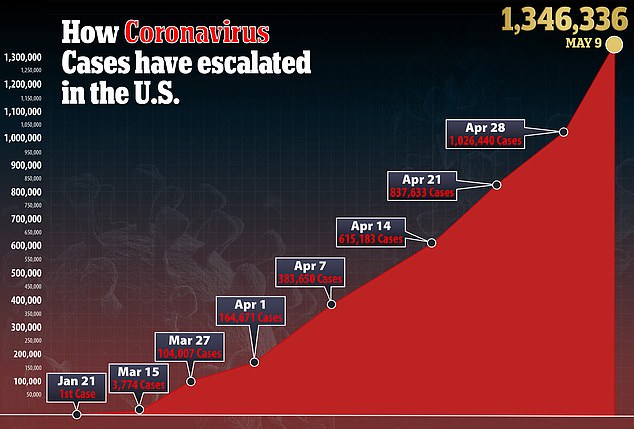 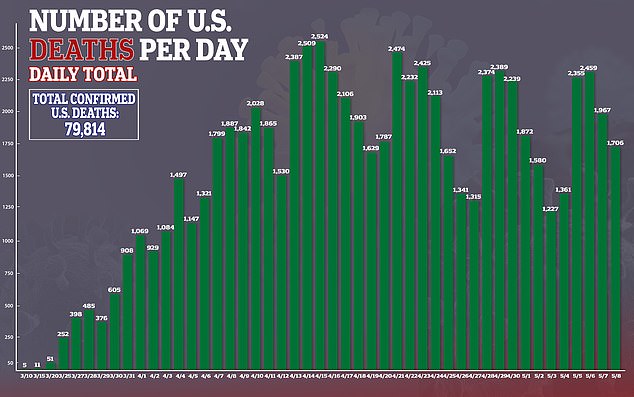 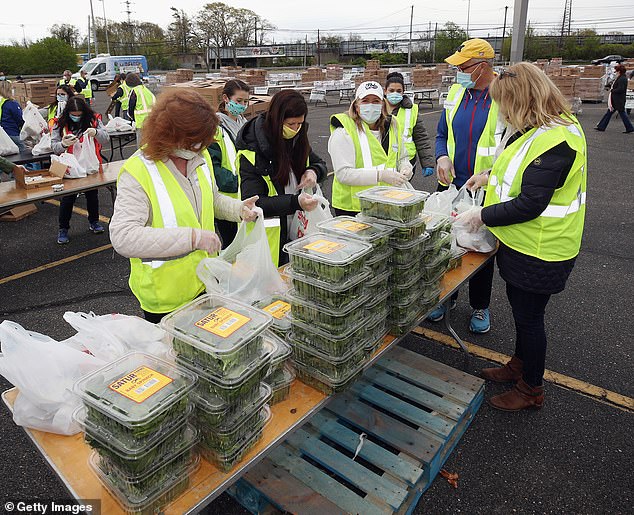 The record unemployment rate reported on Friday captured the pain of a nation where tens of millions of jobs suddenly vanished, devastating the economy and forcing Trump to overcome historic headwinds to win a second term.

Just a few short months ago, Trump planned to campaign for re-election on the back of a robust economy – but with an unemployment rate of 14.7 per cent, the highest since the Great Depression, some states crucial to Trump’s victory are suffering financially.

The president is now tasked with convincing voters that the catastrophic jobs losses were the result of the pandemic – not his management of the public health crisis. 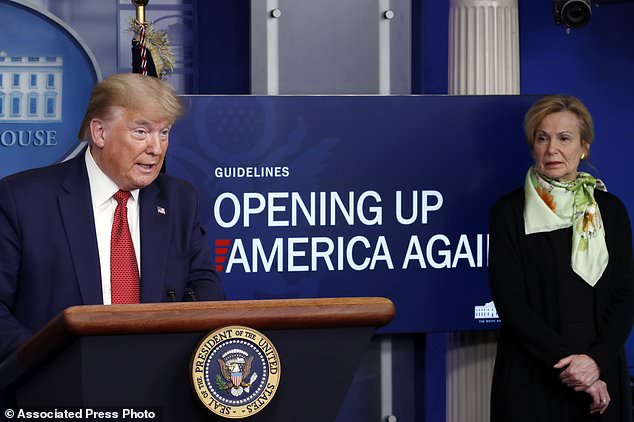 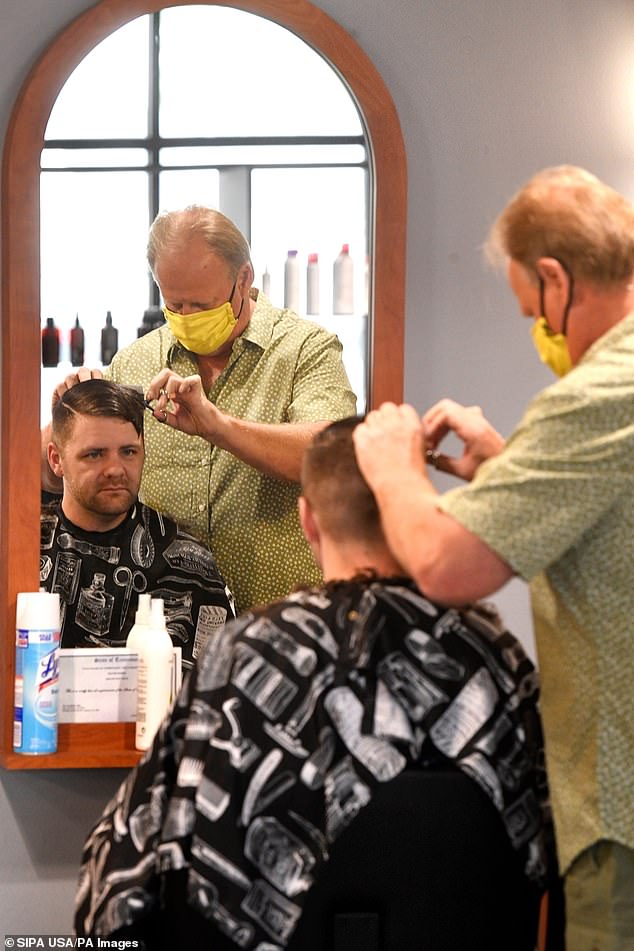 The CDC report provided information for business owners about when it was safe to reopen. Pictured: Tennessee barber Greg Smith is pictured back at work Wednesday

Meanwhile, 11 members of the United States Secret Service have recently tested positive for COVID-19 while 23 others have recovered from the illness..

Some 60 employees of the agency charged with protecting President Trump and other senior government officials are currently in quarantine due to the outbreak, according to Department of Homeland Security documents obtained by Yahoo News.

Meanwhile, Mike Pence’s press secretary, Katie Miller, tested positive for the virus on Friday. She had been in recent contact with the vice president. Miller is married Stephen Miller, a top Trump adviser.

The positive test for Katie Miller came one day after White House officials confirmed that a member of the military serving as one of Trump´s valets had tested positive for COVID-19.

Trump’s valet’s case marked the first known instance where a person who has come in close proximity to the president has tested positive since several people present at his private Florida club were diagnosed with COVID-19 in early March.

The White House was moving to shore up its protection protocols to protect the nation’s political leaders.

Trump said some staffers who interact with him closely would now be tested daily.

Pence told reporters Thursday that both he and Trump would now be tested daily as well.