President Trump’s personal lawyer Michael Cohen is pushing back on claims made by Stormy Daniels’ attorney that she’s been threatened for suggesting she’ll share her story about an alleged affair with President Trump.

‘I have never threatened her in any way and I am unaware of anyone else doing so,’ Cohen told Vanity Fair for a story published Monday, adding that he could only speak for himself when asked if she was threatened by anyone associated with the president. 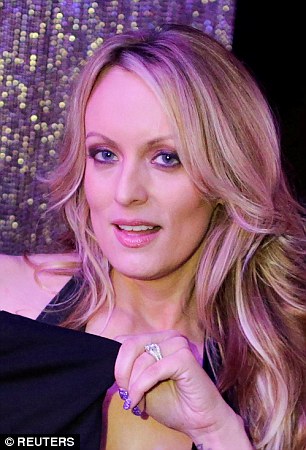 Daniels recently sat down with 60 Minutes, for an interview that is slated to air Sunday.

Cohen denied that he was pursuing legal action to keep the interview from being aired.

But added that if it should air on Sunday, ‘it’s just another breach by Ms. Clifford and will only further increase the damages I will be seeking pursuant to the agreement.’

Daniels’ new lawyer, Michael Avenatti has tried to argue that because President Trump didn’t sign the agreement then it’s void.

Cohen disagreed saying that the contract was between two parties, the L.L.C. he set up to pay Daniels the money and the actress.

The Trump lawyer argued that a signature from any other party wouldn’t be necessary.

In that same vein, he told Vanity Fair that he kept Trump out of the loop about the payment, adding that it also wasn’t a campaign donation.

‘There is a clear case that negates the FEC complaint raised against me,’ Cohen said.

The group Common Cause has complained to both the Federal Election Commission and the Department of Justice about the hush money payment,  suggesting that it represented either a campaign expenditure or an unreported contribution.

Common Cause speculated that Trump didn’t sign the agreement so Cohen could later avoid prosecution for ‘knowing and willful violation of federal campaign finance law.’

However, Common Cause pointed out in a recent note to reporters, as a member of the New York bar Cohen has a legal responsibility to inform his client of ‘all material information regarding the Stormy hush money agreement.’

Cohen contends that he jumped in and helped Trump, with the election’s imminence not playing a role in his actions.

‘If she would have come to me a month before, or three months before, I would have done the same thing,’ Cohen said.

‘I truly care about him and the family – more than just as an employee and an attorney,’ Cohen added.