Donald Trump let Steve Mnuchin and Peter Navarro fight over the future of TikTok in a ‘vicious’ Oval Office ‘verbal brawl’ which the Treasury Secretary won convincing the president the Chinese app should be bought by Microsoft, according to anonymous sources.

People familiar with the matter told the Washington Post how the fate of the Chinese video sharing app boiled down to a shouting match in the White House between the two men.

Treasury Secretary Mnuchin argued TikTok should be sold to a US company while Trade Adviser Navarro disagreed calling for a total ban of the service on US soil, they said.

The behind the scenes fight marked the latest saga in a political back and forth over how to handle the social media giant and culminated in Trump’s decision to grant a 45-day deadline for a sale to be reached before it will be banned.

TikTok is ready to strike back against the move, with the video-sharing service prepared to file a lawsuit as soon as Tuesday, according to NPR. 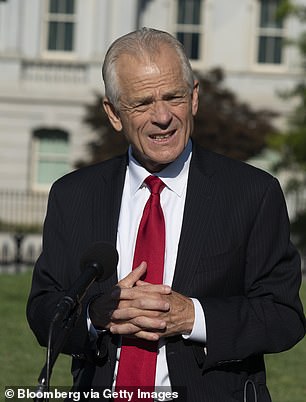 Donald Trump let Steve Mnuchin (left) and Peter Navarro (right) fight over the future of TikTok in a ‘vicious’ Oval Office ‘verbal brawl’ which the Treasury Secretary won convincing the president the Chinese app should be bought by Microsoft, according to anonymous sources

Sources told the Post the decision came about after Mnuchin and Navarro went head to head in what one described as a ‘knockdown, drag-out’ brawl in front of the president and several aides late last week.

Mnuchin said he had spoken with Microsoft bosses and argued in favor of a sale to the tech giant on national security grounds, the Post reported.

However, Navarrao blasted Mnuchin for being too soft on China and demanded TikTok be banned altogether, they said.

The alleged clash marked the latest in a string of clashes between the two advisers, after the duo reportedly became embroiled in a slanging match on a trip to Beijing back in 2018.

One former official told how the two men have long locked horns when advising the president, with Navarro ‘the devil on [Trump’s] shoulder while ‘governor’ Mnuchin likes to ‘slow everything down’.

‘I think Trump’s instincts are to be aggressive toward China,’ they said. 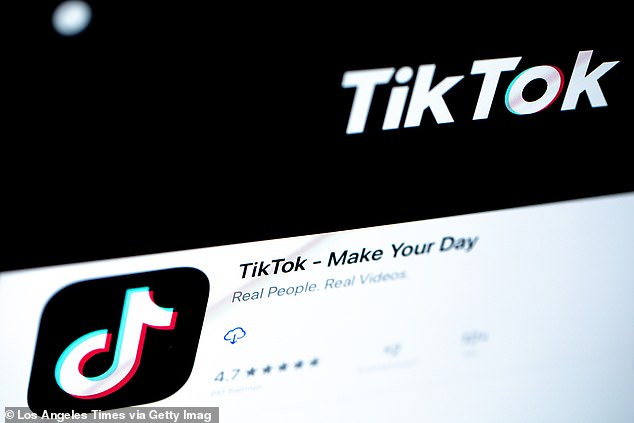 TikTok plans to sue Trump over his ban, insider says

TikTok is reportedly planning to sue the Trump administration over the president’s executive order banning the Chinese app from the US.

The video-sharing service is prepared to file a federal lawsuit as early as Tuesday in the US District Court for the Southern District of California, NPR reported Saturday, citing an unnamed source who was directly involved in the forthcoming litigation.

The outlet said TikTok will argue the order Donald Trump signed on Thursday is unconstitutional because it did not give the company an opportunity to respond, and that the national security justification given for the ban is baseless.

‘It’s based on pure speculation and conjecture,’ the source said. ‘The order has no findings of fact, just reiterates rhetoric about China that has been kicking around.’

The White House declined to comment on the expected legal battle when approached for comment by NPR.

However, spokesman Judd Deere did defend Trump’s order, saying: ‘The Administration is committed to protecting the American people from all cyber related threats to critical infrastructure, public health and safety, and our economic and national security.’

In a statement TikTok vowed to ‘pursue all remedies available to us in order to ensure… our company and our users are treated fairly – if not by the Administration, then by the US courts’.

‘Navarro’s like the devil on his shoulder, saying, ‘Do it, do it.’

Mnuchin is more like a governor, trying to slow everything down — ‘What about Wall Street? What about Phase 2 [of the trade deal]?’

‘One of the great strengths of the Trump administration is the president’s reliance on strong, often opposing views, to reach decisions which are invariably in the best interests of the American people,’ Navarro said in a statement to the Post.

‘Because this is true, it is critical for a strong America that ‘what happens in the Oval Office, should stay in the Oval Office’ so I have no comment on what is clearly a malicious leak riddled with hyperbole and misinformation.’

His comments come after the trade adviser hinted at his disapproval for the deal earlier this week when he questioned whether Microsoft’s ties to China.

‘The question is, is Microsoft going to be compromised?’ he asked in an interview with CNN.

Treasury Department spokesperson Monica Crowley confirmed to the Post that Mnuchin did participate in a meeting with the president to update him on national security recommendations but refused to comment on the specifics of the meeting.

On Thursday, Trump issued executive orders giving TikTok parent company ByteDance 45 days to reach a deal to sell the app or its US arm will be shuttered.

The order claims TikTok ‘may also be used for disinformation campaigns that benefit the Chinese Communist Party,’ and specifically cites TikTok videos that ‘spread debunked conspiracy theories about the origins of the 2019 Novel Coronavirus’.

It also states that the company ‘reportedly censors content that the Chinese Communist Party deems politically sensitive, such as content concerning protests in Hong Kong and China’s treatment of Uyghurs and other Muslim minorities’.

‘The United States must take aggressive action against the owners of TikTok to protect our national security,’ it adds.

Along with the executive order, Trump sent a letter to the House speaker and Senate president explaining the move.

The letter states that TikTok ‘automatically captures vast swaths of information from its users’. 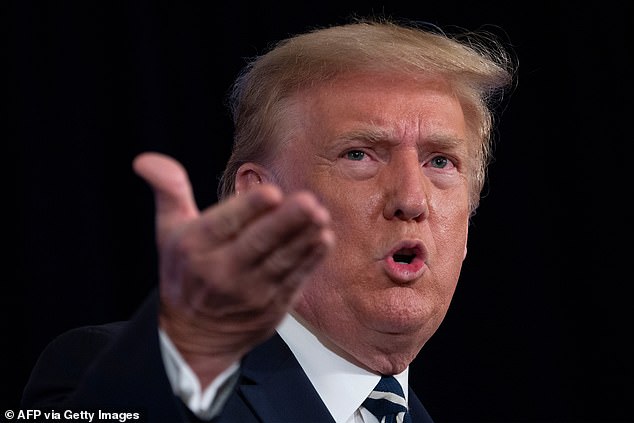 WHAT DOES MICROSOFT STAND TO GAIN FROM BUYING THE US ARM OF TIKTOK?

TikTok’s catchy videos and ease of use has made it popular, and it says it has tens of millions of users in the U.S. and hundreds of millions globally.

Its parent company, ByteDance acquired Shanghai-based video app Musical.ly in a $1 billion deal in 2017 and relaunched it as TikTok the following year.

In its statement, $1.5 trillion company Microsoft said it may invite other American investors to participate on a minority basis in the purchase of TikTok. Financial terms were undisclosed.

ByteDance was valued at as much as $140 billion earlier this year.

Any deal with Microsoft to buy TikTok could be worth billions of dollars. It could also expose the company, which already owns Xbox, LinkedIn and Skype, to tech savvy teens.

‘This data collection threatens to allow the Chinese Communist Party access to Americans’ personal and proprietary information – potentially allowing China to track the locations of Federal employees and contractors, build dossiers of personal information for blackmail, and conduct corporate espionage,’ it continued.

This marked the outcome of weeks of flip-flopping from the president where he first said he would grant a sale of the app, then moved to ban it, before approving a sale once again.

The executive orders sent stocks tumbling worldwide overnight and sparked fears of a backlash from Beijing.

Meanwhile, Trump has said the US treasury should pocket a ‘very substantial’ portion of the TikTok sale.

Microsoft has reportedly been in talks to acquire TikTok in a firesale, and Trump’s order has now given the tech giant until September 20 to complete the deal.

In a separate executive order, Trump issued a similar ban on the Chinese-owned messaging service WeChat, accusing the app of funneling personal information to the Chinese Communist Party.

The TikTok saga has rumbled on far longer than the controversy over the last two weeks.

Sources told the Post there has been many months of behind the scenes dealings.

The US first raised concerns over TikTok being a potential national security threat last summer.

This turned into a full-scale national security investigation by the Committee on Foreign Investment in the United States this year, with concerns raised that the Chinese government could be accessing personal data on the app.

ByteDance has denied that it shares data with the Chinese government, and Chinese state media blasted the US response to TikTok as ‘madness’.

Under a Chinese law introduced in 2017, companies there have an obligation to support and cooperate with the country’s national intelligence work.

Leone, who has given $100,000 to Trump’s reelection campaign and sits on his reopening task force, allegedly said he would use his relationship with Trump to influence his decision over the video service.

However, the White House ramped up its investigation when India banned the app at the end of June.

Last month, the House of Representatives voted to bar federal employees from downloading the app on government-issued devices as part of a proposal offered by Representative Ken Buck.

On Thursday, the US Senate then unanimously voted to approve a bill banning federal employees from using TikTok on government-issued devices.

A finalized version of the bill, combining the House and Senate versions, would need Trump’s approval to become law.

Meanwhile, Microsoft has expanded its talks on TikTok to a potential deal that would include buying the global operations of the fast-growing video-sharing app, the Financial Times reported Thursday.

Microsoft declined to comment on the report, after previously disclosing it was considering a deal for TikTok operations in the US, Canada, Australia and New Zealand.

According to the report, Microsoft has shifted its view because of the complexities of splitting the app and making it operable globally. TikTok operates in 150 countries.