In one of his final acts as president of Mexico, Enrique Pena Nieto bestowed his nation’s highest award for a foreigner on Jared Kushner, a senior adviser to and son-in-law of the United States president.

President Trump made a surprise stop at the ceremony, held in the same hotel as a trade deal signing between the U.S. and Mexico that was to follow. He sat in the front row next to his daughter, Ivanka, as Pena Nieto presented her husband with the award.

Kushner in a tribute to his boss declared Trump to have a ‘genuine respect and care’ for Mexico and it’s people.

‘I do believe we have been able to put that in the right light,’ he said of relations between the two nations, which he claimed are in a ‘historic place’ in the current administration.

In one of his final acts as president of Mexico , Enrique Pena Nieto bestowed his nation’s highest award on Jared Kushner, a senior adviser to and son-in-law of the United States president 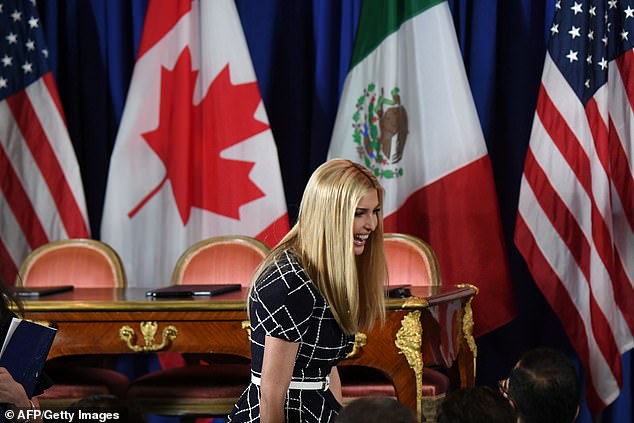 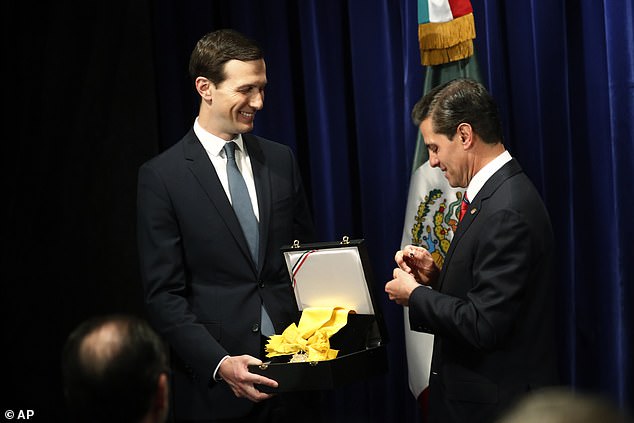 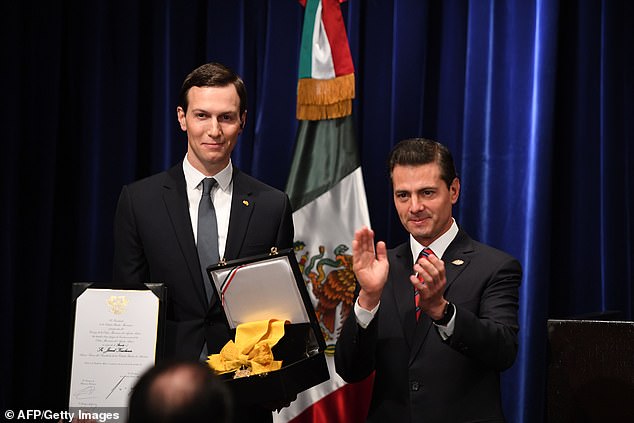 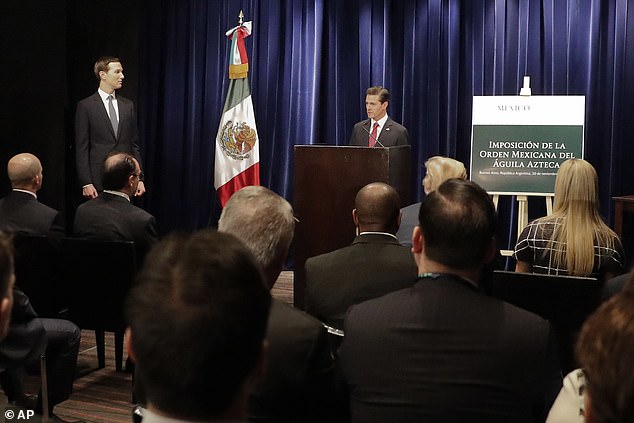 Pena Nieto honored Kushner for the work he did to bring a modernized trade deal between the two countries and Canada across the finish line.

He and Trump signed it alongside Canadian Prime Minister Justin Trudeau at the U.S. president’s hotel an hour later at a ceremony at which Trump said the leaders had become friends.

‘This has been a battle, and battles sometimes make great friendships,’ Trump said in formal remarks.

Trump and Pena Nieto have indeed had their share of battles over trade and immigration since Trump announced his candidacy for office in 2015 with a declaration that Mexicans illegally crossing the border are criminals and rapists.

He escalated the rhetoric in the lead-up to the federal election in November with claims that Mexico was doing nothing to halt caravans of Central American migrants full of criminals, and possibly terrorists, hurdling toward the United States’ southern border.

A central campaign promise of Trump’s had been to build a wall to keep illegal immigrants out and make Mexico pay for it.

But Pena Nieto steadfastly refused to put up the funds, even after Trump promised to exact the money from Mexico through trade deliberations. Trump is trying to squeeze the money he need to complete construction on the barrier out of Congress now.

Kushner emerged as a central figure in the negotiations, working with the country’s foreign secretary so closely that he was accused of engaging in shadow diplomacy that deeply irritated the previous U.S. secretary of state.

Sources told DailyMail.com that Kushner would call to smooth negative feelings over every time the president indulged in a Twitter tirade about Mexico. The White House denied the charge while acknowledging that the president’s son-in-law had taken a leading role in the deal-making and talked frequently with Mexican Secretary of Foreign Affairs Luis Videgaray. 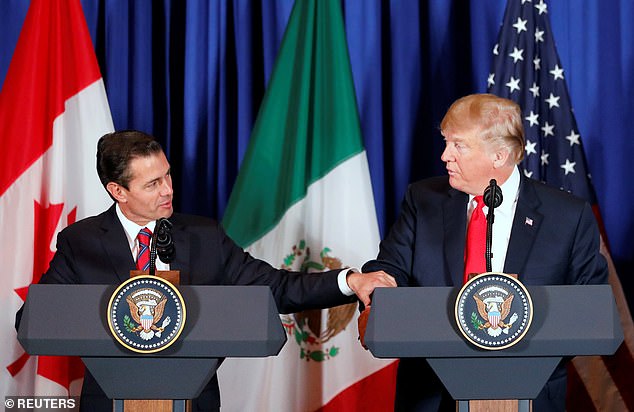 Trump and Pena Nieto signed the deal an hour later in President Trump’s hotel at a ceremony, where the U.S. president said that Pena Nieto had become a friend

Tomorrow will bring a brand new government in Mexico, and the Trump administration was eager on Friday to finish its hard-nosed deal with Mexico and Canada while Pena Nieto was still in office.

Before the two presidents and the prime minister put pen to ink, however, Pena Nieto had a gift for Kushner.

Pena Nieto in a private ceremony at the Park Hyatt in Buenos Aires gave Kushner the Order of the Aztec Eagle, the highest honor that can be bestowed on a foreigner by the Mexican government.

He also presented Kushner with a medal and a diploma, which Kushner proudly held up for his audience, which included a pack of photographers trailing the president.

‘I am very honored by the recognition that you’ve given me here today,’ Kushner told the exiting leader.

He told Pena Nieto that he had made a ‘very big difference’ as president by doggedly protected his nation’s interests.

‘You have always put Mexican interests first even when it wasn’t popular,’ he assessed.

Kushner said that the American president had also demonstrated a commitment to the fair treatment of the Mexican people.

‘Through your direction and leadership we were able to accomplish a lot of great things,’ he told President Trump in a short speech.

‘While there has been a lot of tough talk, I have seen the genuine respect and care that President Trump has for Mexico and the Mexican people and I do believe we have been able to put that in the right light.’

He also gave a shout out to his wife, Ivanka, who serves as an unpaid adviser to her father in the White House, just as he does.  She put up with late-night trade talks at their Washington, D.C. home, he said.

The former real estate developer who came to the job with no formal foreign policy experience, having never worked in government prior to the Trump administration, said he had earned a ‘PhD in trade’ throughout the process.

White House Press Secretary Sarah Sanders, who was also in the crowd, congratulated Kushner after the event in a tweet.

‘Incredible honor for Jared and great moment for the entire Trump administration,’ she said.