President Donald Trump went back on a war footing against Senate Republican leader Mitch McConnell, tweeting out a statement that said he ‘failed’ just hours after the White House tried to paper over a feud between the two men.

‘The only problem I have with Mitch McConnell is that, after hearing Repeal & Replace for 7 years, he failed!

That should NEVER have happened!’ Trump tweeted Thursday, returning to the Senate’s inability to pass an Obamacare repeal.

The tweet’s two exclamation points and use of all caps left little doubt about the president’s feelings on the subject. The inability to move on one of his top campaign and legislative goals is a sore spot the president has brought up repeatedly.

Earlier, Trump went after McConnell and House Speaker Paul Ryan by name, saying they refused his idea of tying unpopular debt ceiling legislation to a Veterans bill – amid a looming deadline for the nation’s borrowing limit. ‘They didn’t do it,’ Trump wrote of his idea.

President Donald Trump is back in D.C. after a trip out west, with budget deadlines a little more than a month away

‘I requested that Mitch M & Paul R tie the Debt Ceiling legislation into the popular V.A. Bill (which just passed) for easy approval. They… didn’t do it so now we have a big deal with Dems holding them up (as usual) on Debt Ceiling approval. Could have been so easy-now a mess!’ Trump wrote in two successive tweets.

Congressional leaders frequently use the tactic of attaching must-pass legislation to a popular vehicle, but there has been no indication that the veterans bill is anywhere near strong enough to move Republicans to vote for a debt ceiling increase they despise.

Debt ceiling votes have been anything but easy in recent years. The party out of power frequently forces the majority to provide votes for the unpopular measure. Republicans ran on smaller government and lower spending, making a vote for massive new borrowing authority a difficult political choice.

McConnell all but confirmed reports of a nasty feud with President Donald Trump by releasing a statement about their ‘regular contact’ and ‘shared goals.’

The statement, issued by the powerful leader’s office Wednesday, made no effort to deny reports of angry phone calls, profanity – or a claim that he himself privately questioned whether Trump can effectively lead republicans in 2018.

Instead, it ran through a list of mostly modest legislative goals to keep the government humming – just hours after Trump at a boisterous Phoenix rally threatened to shut down the government if necessary to get funds to construct a wall on the southern border.

‘The President and I, and our teams, have been and continue to be in regular contact about our shared goals,’ McConnell said in the statement.

The White House issued a separate statement with different priorities – including a border wall, which McConnell didn’t mention. 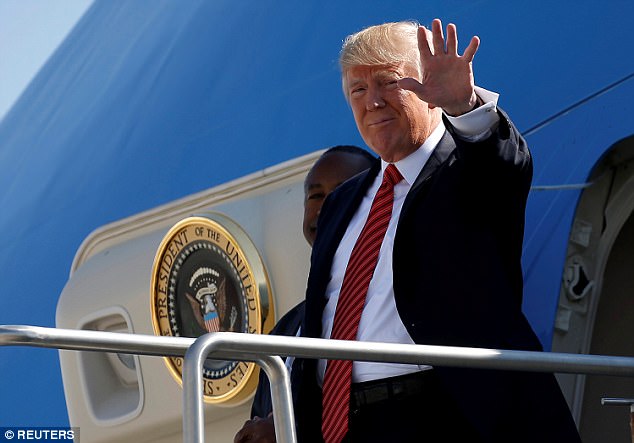 President Donald Trump waves as he steps out from Air Force One in Reno, Nevada, U.S., August 23, 2017

That statement, which referenced ‘previously scheduled meetings’ between the two men, did not reference the president’s continued beef with McConnell over the failure to pass Obamacare.

Trump begins to focus his energies Thursday on avoiding a calamitous government shutdown as he huddles with his budget director amid tense relations with Congress.

Trump and budget director Mick Mulvaney meet Thursday afternoon, just days after Trump issued his own threat to shut the government down if necessary to secure funding for a wall on the southern border.

‘So I don’t think anyone is interested in having a shutdown,” Ryan said at a tax forum. “I don’t think it’s in our interest to do so,’ he said. 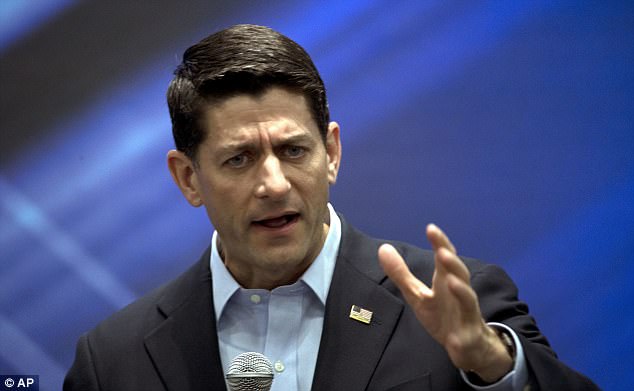 House Speaker Paul Ryan speaks during his visit to Intel in Hillsboro, Ore., Wednesday, Aug. 23, 2017. Ryan used his visit to the technology giant to talk about tax reform

The White House said Wednesday that prescheduled meetings between then would occur, but didn’t give a time or date, following a series of attacks on McConnell and GOP senators by the president following the failure to pass an Obamacare repeal.

The government reaches its statutory debt limit on Sept. 29th, and runs out of money at the end of September.

‘We have a lot of work ahead of us, and we are committed to advancing our shared agenda together, and anyone who suggests otherwise is clearly not part of the conversation,’ said McConnell in his own statement, which unlike the one from the White House did not mention a border wall as a priority.

Investment firm Goldman Sachs in guidance to investors handicaps the chance of a shutdown at 50-50, Axios reported. 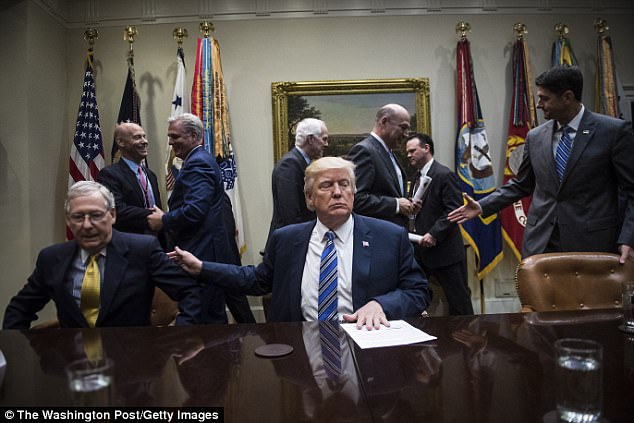 President Donald Trump greets Senate Majority Leader Mitch McConnell of Ky., left, as House Speaker Paul Ryan of Wis., right, takes his seat during a meeting with House and Senate Leadership in the Roosevelt Room of the White House in Washington, DC on Tuesday, June 06, 2017

A top GOP source put the chances even higher – 75 per cent. “The peculiar part is that almost everyone I talk to on the Hill agrees that it is more likely than not,’ the source told the outlet.

Centrist Republicans continue to chafe at the president’s tactics. ‘It’s entirely counterproductive for the president to be picking fights with Republican senators who he will need for important agenda items that they both agree on,” Pennsylvania GOP Rep. Charlie Dent (R-Pa.) told the Washington Post.

“Does he think that Democratic senators will be more cooperative than [Sens.]John McCain and Jeff Flake and Susan Collins? It doesn’t seem to make any sense,’ he said.