Trump: McCain vote against health care a slap in the face

‘You look at McCain, what McCain has done is a tremendous slap in the face to the Republican Party,’ Trump said, as he vented his frustrations over killing Obamacare, suggesting the Arizona senator was ‘the reason’ nothing had passed.

In late July, McCain returned to the upper chamber on the heels of receiving a grim brain cancer diagnosis and cast a key no vote, derailing the Republicans’ ‘skinny’ Obamacare repeal bill.

Now, with five days left to get Graham-Cassidy passed using reconciliation, McCain is poised to undo that effort again, announcing Friday that he was a no vote. 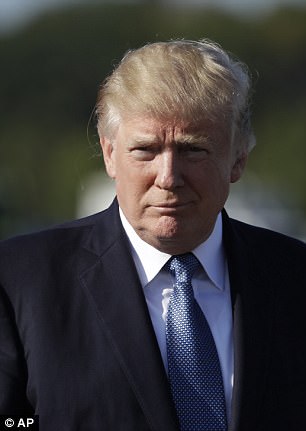 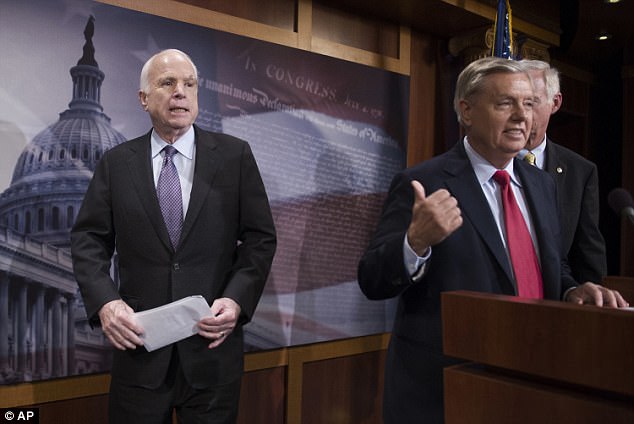 Sen. John McCain, R-Ariz. (left), derailed a Republican effort to pass a ‘skinny’ Obamacare repeal bill in July and on Friday he announced he’s voting against another bill too, co-authored by Sen. Lindsey Graham, R-S.C. (right)

On the show, Trump suggested that voters had the right to be angry, as his fellow Republicans were not living up to their campaign promises.

‘It’s disgusting,’ Trump said. ‘When I ran I was told I’d have a bill on my desk to sign day one.’

President Trump pointed to Republicans’ repeated efforts to repeal and replace Obamacare, voting for bill after bill in the House, when President Obama was still in office.

‘Was it 61 times?’ Trump asked, pointing out it ‘didn’t matter’ because Obama was never going to sign away his signature piece of legislation, and Republicans were outnumbered in the Senate until the Democrat’s waning years.

‘I would take those bills right now,’ Trump said, adding, ‘But now, when it matters, because you have a president who is actually going to sign it, they don’t do it and they pander and they grandstand.’

That’s when he set his sights on McCain.

‘He was good to go all week long, all month long, and then all of the sudden he goes thumbs down,’ Trump scoffed. ‘You can call it what you want, but … that’s the only reason we don’t have it because of John McCain – nobody thought he was a negative vote.’

The president told the radio hosts he was given a list of 10 GOP senators to work on and that list didn’t include McCain.

‘I turned every one of them around, the ones I spoke to,’ Trump explained. ‘But then John McCain, some place after 1 a.m. in the morning, late, late in the evening, he all of the sudden goes thumbs down.’

‘Without John McCain, we’d already have the health care, and it would be very good, by the way,’ the president added, hitting the Arizona senator again.

The president praised the most recent Graham-Cassidy effort, which takes Obamacare funding and pushes it to the states in the form of block grants, calling it ‘really a Republican thing,’ as the party has preached smaller and more localized government.

‘It would be a great bill,’ Trump added.

McCain isn’t the only Republican who’s putting his foot down when it comes to the bill, with Sen. Rand Paul, R-Ky., saying no first.

Paul was followed by McCain, who was then followed by Sen. Susan Collins, R-Maine, who voiced concerns yesterday on the Sunday shows, along with Sen. Ted Cruz, R-Texas, who outed himself and Sen. Mike Lee, R-Utah, as potential no votes when Cruz appeared Sunday at the Texas Tribune Festival.

During a 60 Minutes special that aired last night, McCain expressed an openness to sitting down and talking with President Trump who, McCain revealed, never apologized to him after saying he ‘wasn’t a war hero’ for being captured and imprisoned when serving in Vietnam.

‘I’d be glad to converse with him, but I also understand that we’re very different people, different upbringing, different life experiences,’ McCain said.

Interviewer Lesley Stahl asked McCain exactly what he meant by that comment.

‘He is in the business of making money and he has been successful both in television as well as Miss America and others,’ the Arizona senator replied. ‘I was raised in a military family. I was raised in the concept and belief that duty, honor, country is … the lodestar for the behavior that we have to exhibit every single day.’