With his long-shot efforts to hang on for a second term dwindling, President Donald Trump is discussing with advisors a range of media ventures that would keep him in the spotlight ahead of a potential 2024 White House bid.

He is considering starting a new television channel or social media company to compete with those he felt betrayed him and stifled his ability to communicate directly with Americans, according to several advisers.

‘I think every option is on the table, for a social media to a media company to him announcing he’s running for president the day he leaves,’ said a Republican official who has taken part in meetings with Trump campaign advisers.

Trump has repeatedly discussed with his advisers a plan to start a social media company to compete with Twitter, whose policies have led to content warnings posted on some of his tweets. 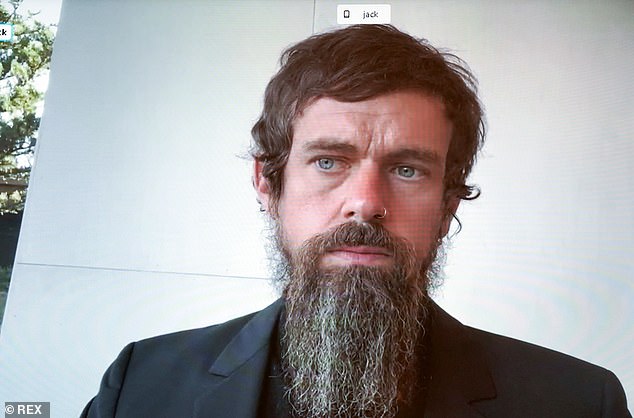 Trump has repeatedly discussed with his advisers a plan to start a social media company to compete with Twitter, led by CEO Jack Dorsey (above)

In the days following the election, many of Trump’s tweets disputing the results were hidden by the service, and could only be viewed by clicking on the warning.

At a meeting with his campaign advisers a couple of months ago, Trump talked about the technology that would be needed for a conservative version of Twitter, and how the actual platform behind Twitter would be easy to mimic, a Republican official at the meeting said.

A number of apps have already launched as conservative, free-speech alternatives to Twitter, including Gab, MeWe and Parler.

Parler has gained the most traction, doubling its membership to about 8 million since the election. But that remains a fraction of Twitter’s 187 million daily active users.

Ultimately, Trump himself could be the major competitive advantage for a potential new social network, if he were able to attract a sizable portion of his 88 million Twitter followers.

Trump has also been considering whether to start a new television news channel to rival Fox News after the president became disenchanted with the conservative network. Trump has complained its programming lacked a universal pro-Trump perspective. 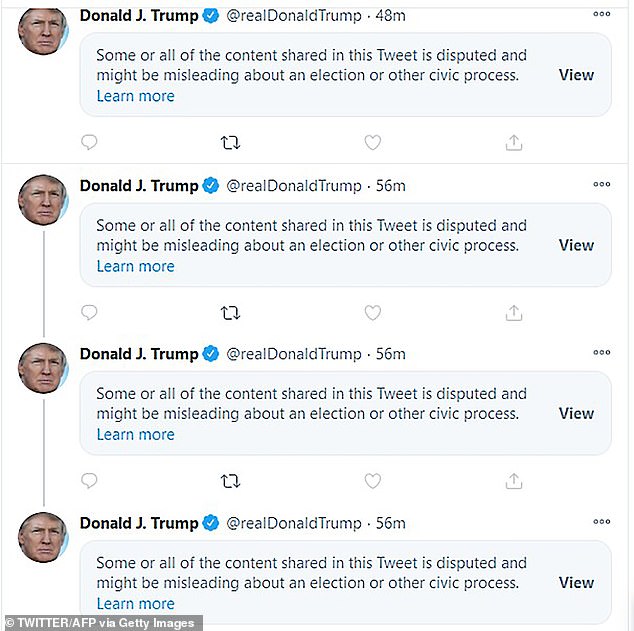 In the days following the election, many of Trump’s tweets disputing the results were hidden by the service, and could only be viewed by clicking on the warning

He was described by aides as upset at Fox over its decision to call the election in Arizona for Biden last week when the result was far from clear.

On Thursday, Biden was projected to win Arizona and its 11 electoral votes after more than a week of vote counting from the November 3 election, Edison Research said.

On Friday with calls of Georgia for Biden and North Carolina for Trump, the final electoral vote tally stood at 306 for Biden to 232 for Trump.

On the morning after the election, Fox News’ morning show, Fox and Friends, reported the highest rating in its 22-year history. Later in the week, the network did lose ground to CNN in primetime, as Biden moved into the lead in the election.

Christopher Ruddy, a Trump friend who is CEO of Newsmax, a conservative TV news channel and website, said launching a rival news channel or streaming service would be difficult.

‘I’m not sure the people around him appreciate the challenge that might involve,’ Ruddy said, adding his company was open to talking to Trump about a show on Newsmax.

‘The president is an incredible draw,’ Ruddy said. ‘He has a huge fan base unlike any other political figure in American history.’

Trump prefers platforms that allow him to present an unfiltered message. He previously mused about broadcasting a daily radio program from the White House, and the idea advanced to the point where officials were talking about how to pull it off, according to an official familiar with the discussions.

Ultimately, the idea was set aside because of logistical concerns, the official said, such as the difficulty of blocking off an hour of the president’s schedule every day for the program.

In the near term, Trump is expected to campaign on behalf of Republican U.S. Senate candidates in Georgia ahead of January 5 runoff elections that will determine whether Republicans hang on to control of the chamber, the president’s aides said.

Trump has not conceded the election to Democratic rival Joe Biden, who on November 7 was projected to clear the 270 Electoral College vote threshold to win the presidency and be sworn into office on January 20.

Trump has claimed without evidence that the voting was beset by widespread fraud, but election officials report no serious irregularities or security issues.

Trump advisers said once it is clear that his legal challenges to the 2020 results are concluded, Trump has discussed announcing plans, possibly by the end of the year, to run for president again in four years.

‘He feels like he was cheated, and he wants to run,’ said an adviser familiar with his thinking.

Such a move would not ensure an open runway for Trump to the Republican nomination, according to a party strategist who asked not to be named.

A long list of Republicans are expected to line up for White House bids in 2024, including Vice President Mike Pence, former U.S. ambassador to the United Nations Nikki Haley, current Secretary of State Mike Pompeo, Senators Ted Cruz and Tom Cotton, and a pair of governors, Ron DeSantis of Florida and Kristi Noem of South Dakota, among others.

‘It isn’t going to freeze the rest of the field,’ the strategist said. ‘Everybody respects Trump, but they think it’s time for a new chapter.’