Donald Trump said Wednesday that while he is willing to release a report documenting a whistle-blower’s accusations about a July phone call with Ukraine’s new president, he expects similar transparency from former Vice President Joe Biden about his half of a brewing scandal.

Trump was accused this week of pressuring President Volodymyr Zelensky to investigate Biden and his son, and of threatening to hold up hundreds of millions of dollars in military aid unless the Ukrainian president complied.

The White House released a transcript of the call Wednesday morning. It showed no indication of a threat, and was ambiguous about the meaning of ‘a favor’ Trump asked Zelensky for.

Trump said during a press conference in New York City, and in a pair of tweets, that he had informed Republican House members ‘that I fully support transparency on the so-called whistle-blower information.’

But he also turned the tables on Democrats, saying he would ‘insist on transparency from Joe Biden and his son Hunter on the millions of dollars that have been quickly and easily taken out of Ukraine and China.’

President Donald Trump turned the tables on Democrats, saying Wednesday that in exchange for releasing a whistle-blower report about a phone call he had with Ukraine’s president, he wanted similar transparency from Joe Biden and his son

The president tweeted his ultimatum before a press conference near the United Nations; the Bidens are tied to suspected corruption involving the firing of a prosecutor who had targeted a company where Hunter Biden, the former vice president’s son, was a highly paid board member

Hunter Biden had a lucrative seat on the board of a Ukrainian energy company at a time when Ukraine’s then-leading prosecutor was investigating it. His father, then vice president, used $1 billion in U.S. loan guarantees as leverage to force the prosecutor’s firing.

The younger Biden’s salary was reportedly $50,000 per month, despite his lack of energy sector expertise.

Larger scandal accompanied Hunter Biden to China, where he traveled with his father aboard Air Force Two in 2013. Ten days later the younger Biden’s firm inked a $1.5 billion deal with the government-run Bank of China.

The president also recalled Wednesday that a trio of Democratic senators, Dick Durbin of Illinois, Patrick Leahy of Vermont and Robert Menendez of New Jersey, wrote to Ukraine’s top prosecutor last year in an attempt to pressure him to cooperate in the Robert Mueller probe of Russian election interference.

They wrote to persuade him not to stonewall the United States ‘in order to avoid the ire of President Trump.’

‘I demand transparency from Democrats who went to Ukraine,’ the president said Wednesday.

‘They went there and they wanted to force the new president to do things that they wanted, under the form of political threat. They threatened him if he didn’t do things. Now that is what they’re accusing me of, but I didn’t do it. I didn’t threaten anybody.’

‘In the letter,’ he said, referring to the Menendez missive, ‘they implied that their support for U.S. assistance to Ukraine was at stake. And that if they didn’t do the right thing, they wouldn’t get any assistance.’

‘Senator Chris Murphy literally threatened the president of Ukraine that if he doesn’t do things right they won’t have Democrat support in Congress,’ Trump claimed of the Connecticut lawmaker. 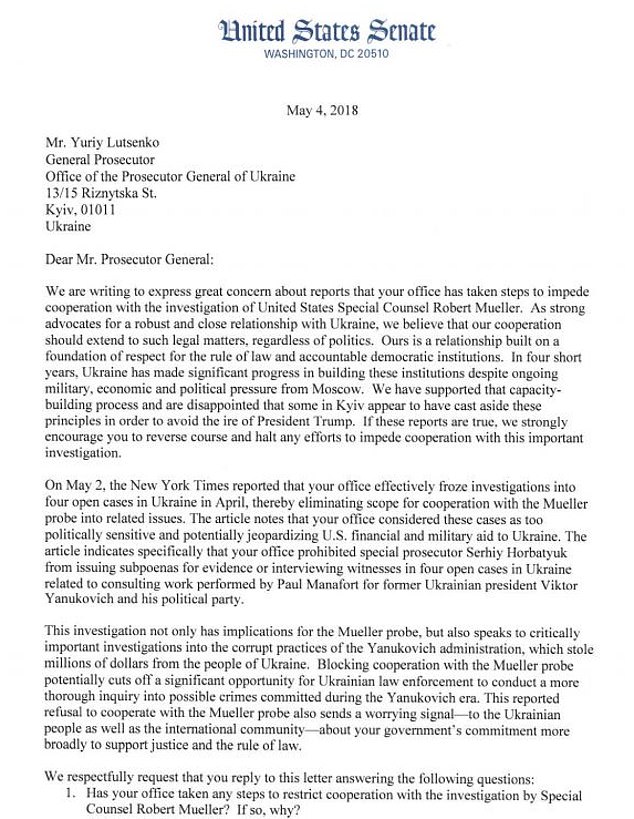 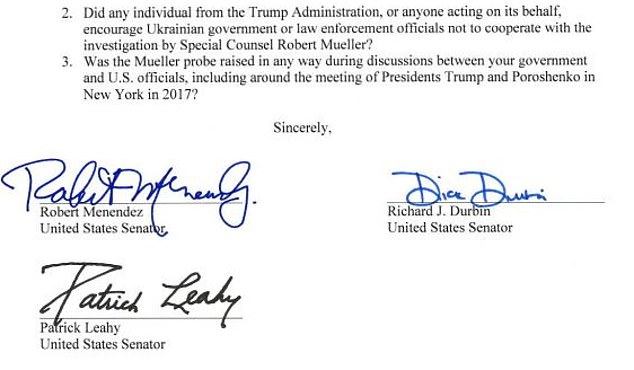