Donald Trump has granted a full pardon to Conrad Black, a media mogul jailed for fraud who later went on to author a flattering biography of the president.

Lord Black, who once owned Britain’s Daily Telegraph as well as the Chicago Sun-Times, was convicted in 2007 and spent three and a half years in a Florida prison.

The former publisher, 74, a Canadian-born British citizen, schemed to siphon off millions of dollars from the sale of newspapers owned by Hollinger Inc – where he was the chief executive and chairman.

Lord Black, who once owned Britain’s Daily Telegraph as well as the Chicago Sun-Times, was convicted in 2007 and spent three and a half years in a Florida prison

Two of his three fraud convictions were later voided, and his sentence was reduced.

On his release in 2012, Black was deported from the United States and returned to Canada. In 2018 his book ‘Donald J. Trump: A President Like No Other’ was published.

The glowing biography extolled the virtues of Trump, and included the opening paragraphs: ‘The traits that elevated Donald Trump to the White House are the traits of America.

‘It was not a country of a culture and language of its own; but a land of dreams and discovery, of aspiration and mystery, with its carefully devised mythos of freedom and opportunity.

‘Like the country he represents, Donald Trump possesses the optimism to persevere and succeed, the confidence to affront tradition and convention, a genius for spectacle, and a firm belief in common sense and the common man.’

In announcing the pardon of Black, White House press secretary Sarah Sanders said Black ‘has made tremendous contributions to business, and to political and historical thought.

‘Lord Black’s case has attracted broad support from many high-profile individuals who have vigorously vouched for his exceptional character.

‘Consistent with his distinguished reputation for helping others, while in prison, Lord Black served as a tutor for 150 students, helping them achieve their educational goals,’ it added.

‘In light of these facts, Mr Black is entirely deserving of this Grant of Executive Clemency.’ 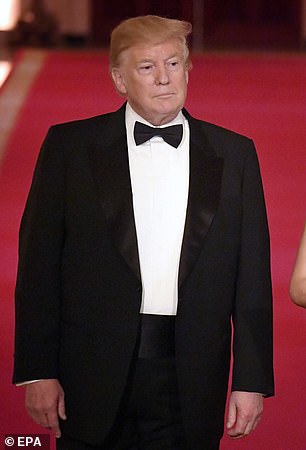 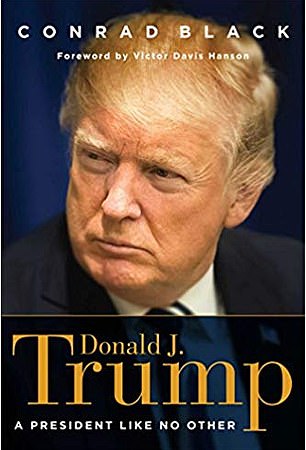 The glowing biography extolled the virtues of Trump, and included the opening paragraphs: ‘The traits that elevated Donald Trump to the White House are the traits of America’

In a 1,700 word statement, Black thanked the president, writing:  ‘When my assistant said there was a call from the White House, I picked up, said “Hello” and started to ask if this was a prank, (suspecting my friends in the British tabloid media).

‘But the caller spoke politely over me: “Please hold for the president,” and two seconds later probably the best known voice in the world said “Is that the great Lord Black?”

‘I said “Mr. President, you do me great honor telephoning me.'”

The former newspaper publisher then added: ‘He could not have been more gracious and quickly got to his point, that he was granting me a full pardon, that would “Expunge the bad wrap you got.”

In a 2004 interview with Vanity Fair magazine, Trump backed his longtime friend Black, and predicted he would bounce back from his then legal ongoing troubles.

‘And now everyone is kissing my ass and begging me to sit at their right-hand side at the table. Conrad is a tremendously strong man who will overcome these obstacles in the end. He will prevail.’