Trump: Pelosi did a deal on USMCA because she is EMBARRASSED about impeaching me

President Trump said that House Speaker Nancy Pelosi only signed on to the USMCA trade deal because she was ’embarrassed’ with the Democrats impeachment announcement.

Standing outside the White House in the rain before heading to a rally in Hershey, Pennsylvania, Trump noted that Tuesday ‘of all days’ the House Democrats signed on to the trade deal.

‘And I call that the silver lining to impeachment. Because without the impeachment they would hever never approved it, in my opinion,’ Trump told reporters. ‘And the reason is they wanted to muffle down the impeachment because they’re embarrassed by it.’

President Trump briefly talked to reporters outside the White House in the rain. There he said that House Speaker Nancy Pelosi was ’embarrassed’ by impeachment, which is why she signed on to the USMCA trade deal later Tuesday morning 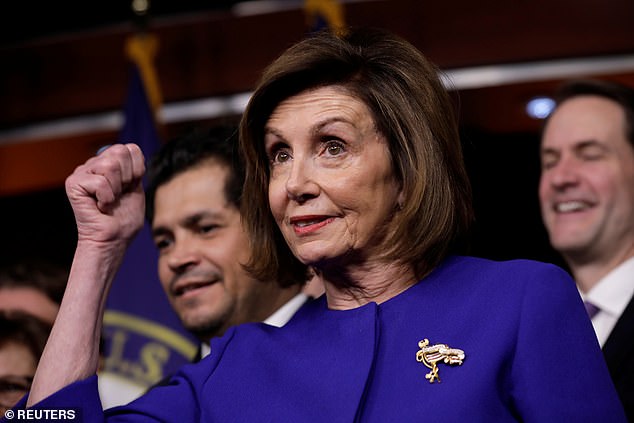 House Speaker Nancy Pelosi announced that the Democrats are now on board with President Trump’s USMCA trade deal, an hour after announcing they planned to pursue two impeachment articles against the president

Trump called the USMCA ‘one of the greatest trade deals ever made for our country.’

Tuesday morning, an hour after Pelosi’s press conference to announce the two impeachment articles Democrats planned to pursue, she announced House Democrats backed the trade deal – but said it was a much different agreement than what the White House had originally proposed.

‘There is no question, of course, that this trade agreement is much better than NAFTA,’ Pelosi said. ‘But in terms of our work here, it is infinitely better than what was proposed by the administration.’

She made a similar point when pushing back on whether she just delivered Trump a ‘win.’

‘I know there are those that like to amplify an dissent, who have said, “why, you shouldn’t do this – this gives him a win.” No. We are so far away from the proposal that he put forth that this is a triumph for American workers,’ she said later Tuesday at the Politico Women Rule summit. ‘We are miles and miles from what he put forth. So he has yielded on what this is.’

Pelosi said the reworked trade agreement has provisions that are better for the environment and for labor. They’ll also be better enforced, Democrats said.

‘Every once in a great while you get to participate in a it-will-never-happen moment,’ Neal remarked, earning laughs since the past hour contained two of those very moments.

Neal talked about the difficulties of etching out the deal, but said he continued to work with the administration’s trade rep, Robert Lighthizer, who Pelosi also applauded.

‘I think we set a world record for hanging up on each other, myself and the trade rep, but at the same time we knew this was an opportunity we couldn’t let get away from us,’ Neal remarked.

The Democrats gave themselves a lot of credit for reworking the deal, with Rep. Jan Schakowsky, a Democrat from Illinois, calling the Trump administration version ‘deeply flawed’ and saying it would have locked in high prescription drug prices.

Republicans in the House and Senate have blasted Democrats for letting the USMCA languish as they took up impeachment.

Announcing House Democratic support for the deal directly after impeachment articles takes that argument away from Republicans – and gives vulnerable purple district Democrats some cover should they want to vote to impeach the president.

‘Is the timing of Pelosi’s change of heart on #USMCA fooling anyone?’ chimed in Ronna Romney McDaniel, the chairwoman of the Republican National Committee. ‘House Democrats have spent months blindly opposing it. While we appreciate their support, it shouldn’t take impeachment backfiring for them to join in putting #AmericaFirst!’

Directly before Pelosi’s announcement, Trump tweeted, ‘Looking like very good Democrat support for USMCA. That would be great for our Country!’

‘Thanks to the strong leadership of President Trump and the efforts of our Administration over the last year, Speaker Pelosi and Congressional Democrats have finally acquiesced to the vioce of the American people [and] have agreed to allow a vote on the #USMCA in the House,’ Pence wrote.

A number of American officials, including Trump’s son-in-law and top adviser Jared Kushner, were in Mexico Tuesday for a signing of the updated version of the agreement.

Pelosi said it wasn’t a ‘coincidence’ that there were back-to-back press conferences announcing impeachment and then the trade deal.

‘No it’s not a coincidence, it’s just that as we get to an end of a session there have to be some decisions made,’ she said. ‘The timetable for impeachment is the timetable for the committees and that came to an end with a hearing yesterday.’

The House Judiciary Committee held a hearing Monday in which staff attorneys for the Democrats and Republicans went through the impeachment materials that the House Intelligence Committee had gathered.