Trump PLUMMETS down list of the ultra-rich by 138 places

Donald Trump’s net worth has dropped by $1.4 billion since he announced his bid to become president of the United States and he’s dropped over 100 places on The Forbes 400 list, the magazine revealed on Tuesday.

The president was estimated to be worth $4.5 billion in 2015 but has dropped to $3.1 billion over the last two years, knocking him 138 spots lower on the annual rich list.

The magazine cites three factors behind Trump’s billion-dollar fall: much of the decline is due revelations about his wealth made through the deeper financial disclosure requirements Trump is subject to as president; also in play are larger market forces such as the fact the president owns a lot of real estate at a time e-commerce is beating brick-and-mortar retail; and, finally, some is due to how his presidency affects his brand.

Donald Trump’s net worth has dropped by $1.4 billion since he became president 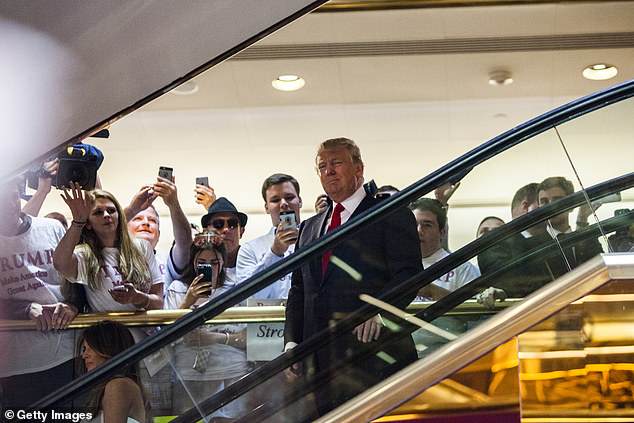 Donald Trump arrives at a press event where he announced his candidacy for the U.S. presidency at Trump Tower on June 16, 2015

Trump bragged to Fortune in 2000: ‘It’s very possible that I could be the first presidential candidate to run and make money on it.’

But, in reality, his polarizing politics hit him in the pocketbook: dropping an estimated $200 million from his net worth.

Team Trump argues the president is sacrificing himself – and his bank account – for the good of the country.

‘My father made a tremendous sacrifice when he left a company that he spent his entire life building to go into politics,’ Trump’s son Eric Trump, who co-manages the Trump Organization, said in a statement to Forbes.

‘Everything he does is for the good of the American people – he has zero involvement in the Trump Organization and quite frankly to suggest otherwise is outrageous.’

Forbes dropped their reporting on the president’s net worth shortly before The New York Times revealed that the president’s father, Fred Trump, was able to steer resources into his son’s hands by vastly undervaluing real estate values, obscuring gifts, and avoiding taxes.

At the tender age of three, Trump was earning $200,000 a year in 2018 dollars from his dad’s business empire, becoming a millionaire by age 8, according to the report.

And there is hope the president can regain some of that lost billion when he leaves Washington.

At a rally in Pennsylvania on Tuesday, Trump bragged about how his policies have boosted businesses both big and small.

Last year’s tax changes allowed companies to deduct the entire cost of equipment and capital improvements in a single tax year, instead of being forced to spread out the deductions over a decade or more.

‘Capital investments are soaring because you can now immediately deduct every penny spent on new equipment. You can do one-year expensing! Nobody thought that was going to ever happen,’ Trump told an approving Philadelphia crowd at a National Electrical Contractors Association convention.

‘In fact,’ he said, ‘I should leave and go back into business, maybe. If you would have told me that when I was a private businessman, maybe I wouldn’t have run for president.’