President Trump proclaimed Sunday that the Republicans are unified in their anger over Hillary Clinton and the Democrats’ ties to Russia not being properly investigated, as charges in the special counsel’s Russia probe are about to drop.

‘Never seen such Republican ANGER & UNITY as I have concerning the lack of investigation on Clinton made Fake Dossier (now $12,000,000?) the Uranium to Russia deal, plus 33,000 plus deleted Emails, the Comey fix and so much more,’ Trump began.

Meanwhile, all of Washington is waiting to hear who might be indicted, as a federal grand jury approved the first charges in the Russia probe being handled by Special Counsel Robert Mueller, who is looking into whether any of Trump’s associates colluded with the Russians.

President Trump took to Twitter Sunday to try and take attention of the Mueller investigation, by suggesting the Democrats needed to be looked at for an Obama-era uranium deal that aided Russia and an unsubstantiated dossier of opposition research 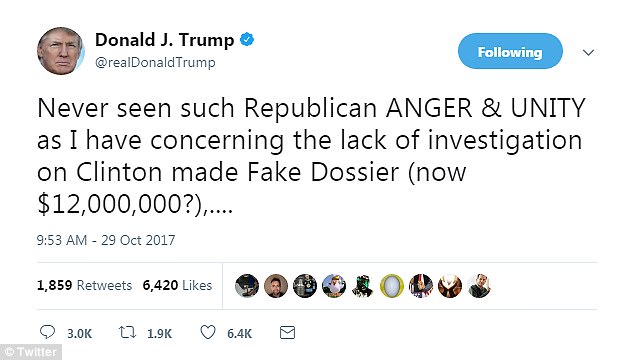 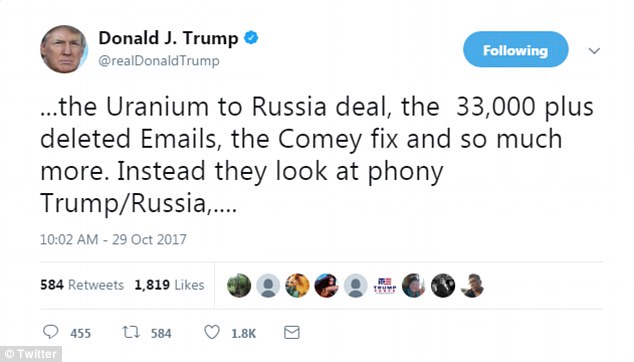 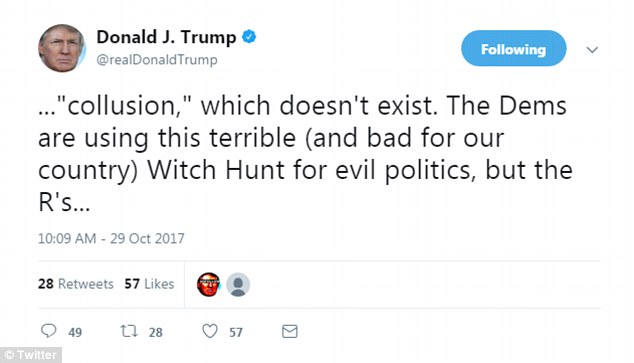 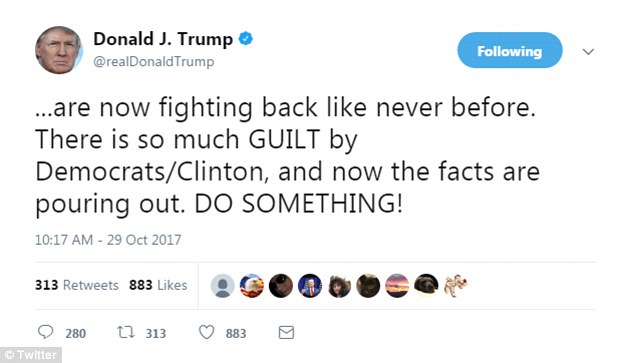 ‘Instead they look at phony Trump/Russia, “collusion,” which doesn’t exist,’ Trump wrote.

‘The Dems are using this terrible (and bad for our country) Witch Hunt for evil politics, but the R’s are now fighting back like never before,’ he continued.

‘There is so much GUILT by Democrats/Clinton, and now the facts are pouring out. DO SOMETHING!’ the president added.

Trump and a number of his allies have reveled in the revelation that Hillary Clinton’s campaign and the Democratic National Committee funded the opposition research known as the dossier, which includes a number of unsubstantiated anecdotes about Trump’s behavior in Russia.

For example, Senate Judiciary Committee Chairman Chuck Grassley, a Republican from Iowa, has voiced concerns the the FBI might have started its investigation into Trump and Russia using this opposition research, tainting it from the start.

Democrats have downplayed the funding aspect of the dossier, which was funded by an unnamed ‘never Trump’  Republican in the primary and then the Democrats through the general election, as they argue to content of the memo is more important. 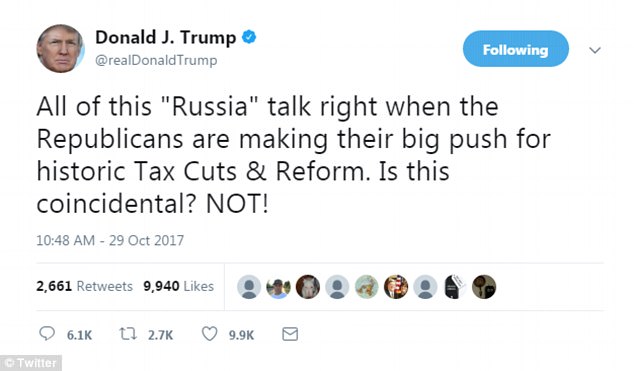 Trump and his associates are also pointing to a uranium deal approved by Hillary Clinton, among other government officials, while she was serving as secretary of state.

Last week Trump labeled the deal, which gave Russia 20 per cent of the U.S.’s uranium to Russia, ‘Watergate modern age.’

Republicans have tried to nail Clinton on pay-to-play allegations as her husband was paid $500,000 to give a speech in Moscow by a Russian bank with Kremlin ties and connections to the Uranium One deal, while the decision-making process was taking place.

The Democrats are concerned that these two new storylines will muddy the waters with the American public when it comes to Mueller’s investigation.

Trump, in a follow-up tweet, worried that all the Russia talk may be overtaking the Republicans’ agenda on Capitol Hill.

‘All of this “Russia” talk right when the Republicans are making their big push for historic Tax Cuts & Reform. Is this coincidental? NOT!’ the president wrote.