President Donald Trump’s State of the Union address quickly hit a patriotic high note on Tuesday as he honored a Republican congressman who survived last year’s baseball-field shooting and has resumed his work in Congress.

Trump called Louisiana Rep. Steve Scalise ‘one of the toughest people ever to serve in this House – a guy who took a bullet, almost died, and was back to work three and a half months later.’

After a raucous round of applause, the president quipped: ‘I think they like you, Steve!’

Trump praised the U.S. Capitol Police, the Alexandria, Virginia Police, ‘and the doctors, nurses and paramedics who saved his life and the lives of many others.’

President Donald Trump praise Rep. Steve Scalise, a Louisiana Republican, on Tuesday during his State of the Union, leading to a rare moment of bipartisan applause 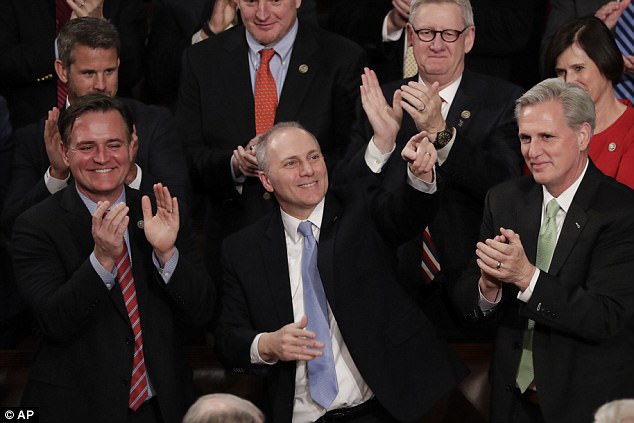 The president used the moment – one of few that drew universal howls of enthusiasm and brought both Republicans and Democrats to their feet – to call for more of the uncommon unity that Congress showed after a gunman opened fire last June during a lawmakers’ baseball practice.

‘In the aftermath of that terrible shooting, we came together, not as Republicans or Democrats, but as representatives of the people,’ Trump said. ‘But it is not enough to come together only in times of tragedy.’

‘Tonight I call upon all of us to set aside our differences, to seek out common ground, and to summon the unity we need to deliver for the people – this is really the key – these are the people we were elected to serve.’ 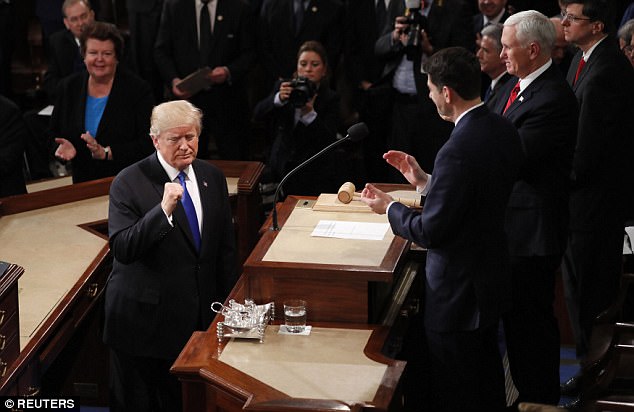 Trump delivered his first State of the Union address on Tuesday at the U.S. Capitol. telling Republicans and Democrats to set aside their differences the way they did in support of Scalise 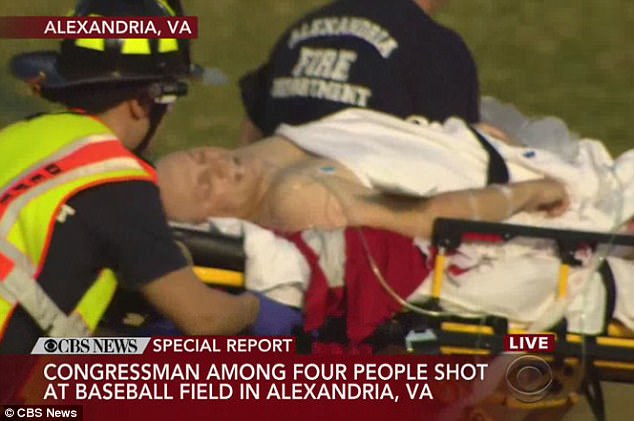 the congressman was rushed to the hospital in June 2017, the worst-hurt of shooter James Hodgkinson’s victims 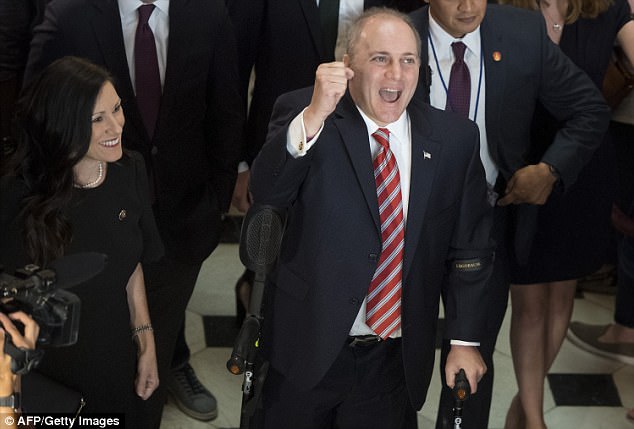 House Majority Whip Steve Scalise says he will undergo surgery Wednesday as part of his recovery from last June’s shooting at a baseball practice.

Scalise was struck by a bullet in the hip, shattering bone and damaging internal organs. He often uses forearm crutches when he walks.

He was playing second base at the time.

Scalise was rushed to the hospital and required 20 units of blood – about twice the amount typically in the human body – as doctors desperately tried to stop him from bleeding to death.

Several surgeries and months of rehabilitation later, he made a spirited return to Congress in September and addressed a House of Representatives united in relief. 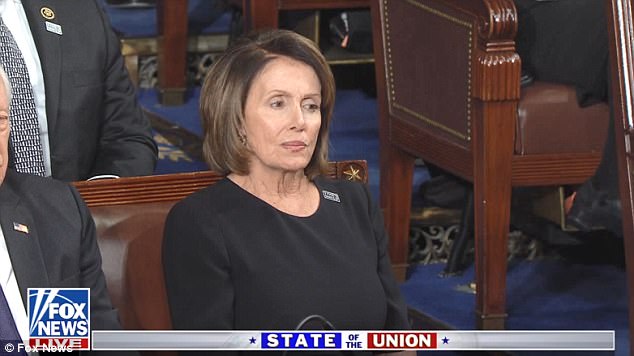 After Trump called on lawmakers to set aside their differences and focus on ‘the people we were elected to serve,’ TV cameras caught Democratic House Minority Leader Nancy Pelosi scowling in the audience 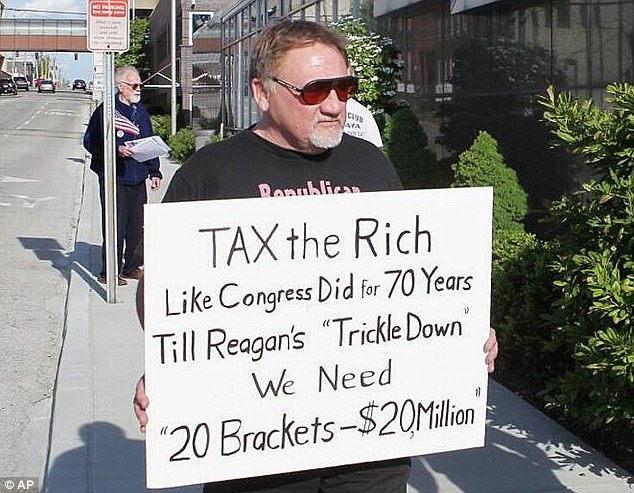 James Hodgkinson, 66, shot Scalise and others at the baseball field after railing against Republicans on social media – once writing: ‘It’s time to destroy Trump & Co.’

James Hodgkinson, the 66-year-old Illinois man who shot him, railed for months on social media against Republicans – once writing: ‘It’s time to destroy Trump & Co.’

During his recovery, Scalise has said that being shot has only strengthened his belief in the Second Amendment and his opposition to gun control.

The congressman said in October that neither his shooting, which nearly killed him, nor the horrific October 1 massacre in Las Vegas which killed over 50 people and wounded hundreds more, swayed his pro-gun views.

Scalise said any attempts at gun control would not have prevented what took place in Las Vegas.

‘Well, first of all, look at some of those bills,’ he said. 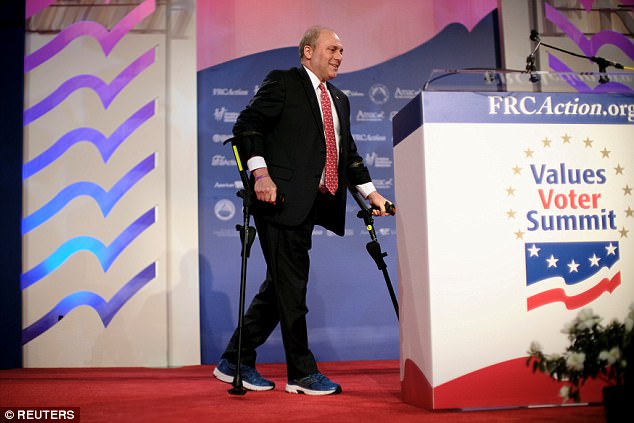 ‘Those bills wouldn’t have done anything to stop this. I mean the gunmen actually cleared background checks.

‘So to promote some kind of gun control, I think, is the wrong way to approach this.

‘And frankly, what I experienced was when there was a shooter, we had – luckily, we had Capitol Police with their own guns.

‘Every single day in America, regular citizens that just have a passionate belief in the Second Amendment, that have their own guns, use guns every single day to protect themselves against criminals.’

THE PRESIDENT AND FIRST LADY’S STATE OF THE UNION GUESTS

Corey Adams – Works as a skilled welder at Staub Manufacturing Solutions in Dayton, Ohio, and became a first-time homeowner in 2007. The White House said Adams and his wife benefited from the Trump tax cuts, in which their savings will go toward their two daughters’ education savings.

Steve Staub and Sandy Keplinger – Siblings who started Staub Manufacturing Solutions in Dayton, Ohio, twenty years ago. On Monday the White House attributed the ‘Trump bump’ with the Staubs’ decision to hire 14 new employees in the past year and start the work to acquire a new building. They also used the Trump tax cut funds to give their employees Christmas bonuses, the White House said.

Ashlee Leppert – An aviation electronics technician in the U.S. Coast Guard, Leppert was instrumental during last year’s hurricane season. Her most dramatic rescue involved lifting a woman to safety in a helicopter basket. Leppert thought the woman was clutching bags of clothes in her arms, when in reality, the victim was trying to transport four children to safety.

Corporal Matthew Bradford – Bradford was the first blind, double amputee to reenlist in the Marine Corps after stepping on an IED while deployed in Iraq in 2007. Bradford joined the Marines straight out of high school and first traveled to Iraq in 2006.

Jon Bridgers – Bridgers is the founder of the Cajun Navy, a non-profit, volunteer rescue and recovery organization that he created in 2016 to respond to flooding in Southern Louisiana. In 2017, the Cajun Navy became an instrumental part in the recovery efforts after Hurricane Harvey flooded swaths of nearby Texas. The group continues to collect donations for storm victims.

Preston Sharp – 12-year-old Sharp has been placing American flags and flowers on veterans’ graves since 2015, after visiting his grandfather’s gravesite and noticing that other veterans were not being properly honored. Sharp has organized the placement of over 40,000 American flags and red carnations to be put on soldiers’ graves as part of his Flag and Flower challenge. He’s now helped honor veterans in all 50 states.

Evelyn Rodriguez – is the mother of Kayla Cuevas, who was brutally murdered in September 2016 by an MS-13 gang member.

Freddy Cuevas – is the father of Kayla Cuevas, who was murdered by an MS-13 gang member on Long Island.

Elizabeth Alvarado and Robert Mickens – Alvarado and Mickens’ daughter Nisa Mickens was murdered by an MS-13 gang member, alongside her friend Kayla Cuevas on September 13. The two girls’ deaths were among 17 Long Island slayings at the hand of the vicious gang.

Officer Ryan Holets – Holets is a police officer in Albuquerque, New Mexico and has been shot twice in the line of duty. He became national news, however, when he and his wife adopted a newborn baby, whose mother was addicted to opioids.

Agent Celestino ‘CJ’ Martinez – Martinez works as a supervisory special agent for the United States Immigration and Customs Enforcement’s Homeland Security Investigations unit. As part of his job, he’s worked to dismantle the MS-13 gang, arresting more than 100 members. Martinez is also a veteran, having served in the United States Air Force and Air National Guard for more than 22 years.

David Dahlberg – Dahlberg works as a fire prevention technician in southern California and during his time working at the Pine Canyon Fire Station in the Santa Lucia Ranger District he helped save 62 children and staff members from a wildfire that had encircled their camp in 2017.