President Donald Trump said on Wednesday the U.S. Supreme Court chief justice should tell the head of a national security court to question FBI and Justice Department officials about their use of a so-called Russia dossier as part of a collusion probe.

Trump singled out Justice Department official Bruce Ohr in a message on Twitter apparently quoting a Fox News analyst. Ohr is linked to the dossier of allegations of possible collusion between Trump’s campaign and Russia.

The dossier was compiled by former British spy Christopher Steele in work partly financed by the Democratic National Committee (DNC).

Republican critics of the dossier have focused heavily on its DNC ties and U.S. surveillance of Trump associates.

President Donald Trump (above in Washington, DC, on August 29, 2018) on Wednesday pressed the Supreme Court chief justice for action on the Russia dossier 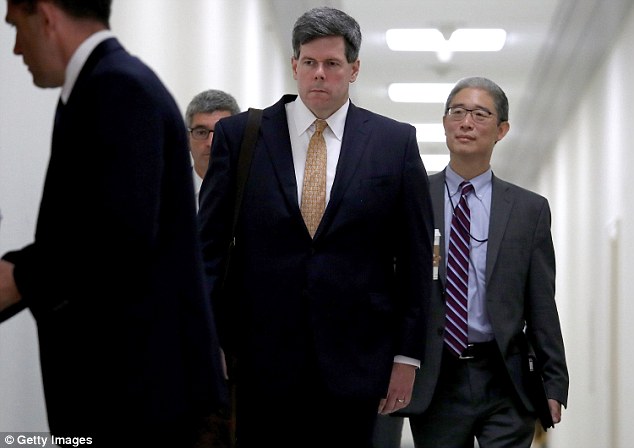 Trump singled out Justice Department official Bruce Ohr (above on August 28, 2018 in Washington, DC) in a message on Twitter

‘Ohr told the FBI it (the Fake Dossier) wasn’t true, it was a lie and the FBI was determined to use it anyway to damage Trump and to perpetrate a fraud on the court to spy on the Trump campaign,’ Trump said in a series of Twitter messages.

‘This is a fraud on the court. The Chief Justice of the U.S. Supreme Court is in charge of the FISA court.

‘He should direct the Presiding Judge, Rosemary Collier, to hold a hearing, haul all of these people from the DOJ & FBI in there, & if she finds there were crimes committed, and there were, there should be a criminal referral by her,’ Trump said in the Twitter post that misspelled the judge’s name. 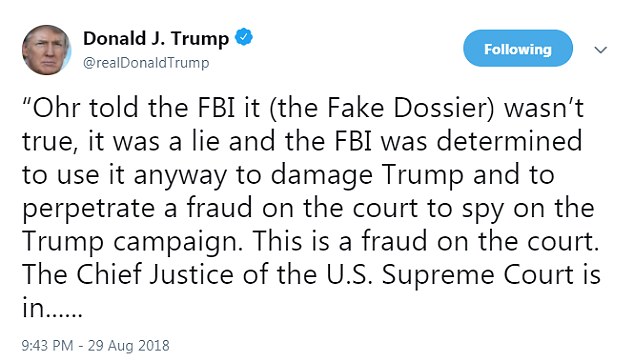 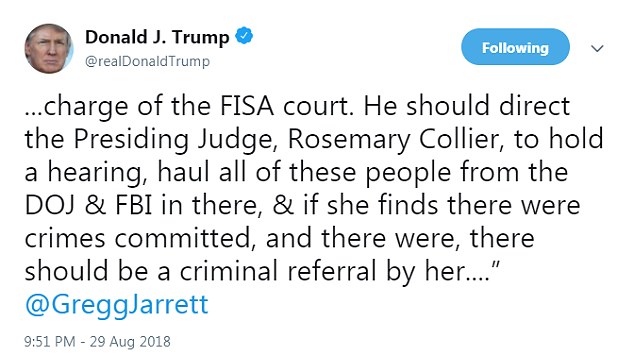 Some Republicans charge that Steele’s Russia dossier, which contains a number of inflammatory and salacious allegations about Trump, was used improperly by Justice and FBI officials to convince the FISA court to extend an eavesdropping warrant against a Trump campaign adviser.

Special Counsel Robert Mueller is currently investigating Russian efforts to influence the outcome of the 2016 presidential election and whether there was collusion with the Trump campaign.

U.S. intelligence agencies have concluded that Russia tried to help Trump win the 2016 election but the Kremlin denies meddling.

Trump denies any collusion and has said Steele’s Russia dossier is ‘bogus.’ (Reporting by David Alexander Editing by Paul Tait)