Former President Donald Trump engaged in a stand-off with top officials in his administration over his controversial pick for attorney general in what his White House lawyer called a ‘murder-suicide pact,’ a new report from Senate Judiciary Democrats revealed Thursday.

Findings in the report detail a meeting between Trump and top DOJ officials in which he discussed replacing the acting attorney general with a little-known department lawyer because he was prepared to send a letter asking legislators in states where the 2020 election results were contested to wipe their slate of electors and pick a new one.

In response the officials threatened an unprecedented wave of resignations in the DOJ and White House Counsel’s office.

Senate Judiciary Committee Chairman Dick Durbin said the findings led him to believe Trump would have ‘shredded the Constitution to stay in power.’

‘Today’s report shows the American people just how close we came to a constitutional crisis,’ Durbin wrote in a statement.

‘Donald Trump would have shredded the Constitution to stay in power. We must never allow this unprecedented abuse of power to happen again.’

Senate Republicans also issued a report on Trump’s actions after the 2020 election, claiming Democrats’ findings are overblown. Their findings indicate that Trump ‘listened to his advisors, including high-level DOJ officials and White House Counsel and followed their recommendations.’

‘The transcripts of this investigation speak for themselves, and they paint a very different picture from the left’s claims that the former president weaponized the Justice Department to alter the election results,’ Iowa Senator Chuck Grassley wrote in a statement.

A January 3 Oval Office meeting detailed in Democrats’ report reveals the extent to which career DOJ employees and even some Trump appointees had to go to keep the ex-president from actively trying to steal the election.

On one end was Trump and Jeffrey Clark, a loyalist who drafted a letter for Georgia officials in December claiming the DOJ was investigating ‘serious irregularities’ in the presidential vote count and asked that they convene the legislature to examine ‘new evidence’ and ‘deliberate matter consistent with its duties under the constitution.’

Trump reportedly opened the meeting by saying, ‘One thing we know is you, Rosen, aren’t going to do anything to overturn the election.’

Over the course of three hours Trump and the officials discussed Trump potentially replacing Rosen with Clark and whether Clark was even qualified to do so. Clark allegedly made it apparent that he would send his letter if he took over the DOJ.

But the DOJ officials were prepared with a nuclear option.

‘At some point during the meeting, Donoghue and Engel made clear that all of the Assistant Attorneys General would resign if Trump replaced Rosen with Clark,’ the report states. 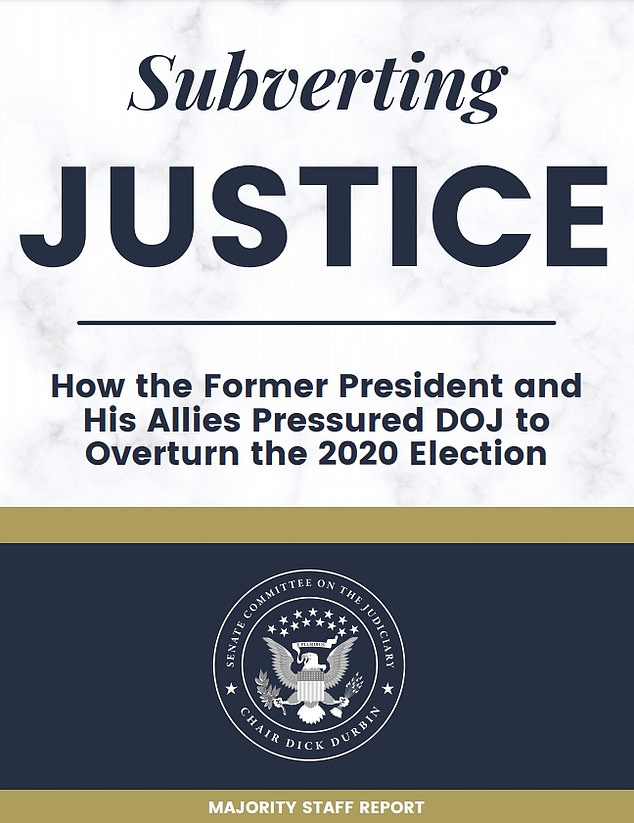 But despite the threat and ‘even though every participant in the meeting except Clark advocated strongly against that course of action,’ Trump didn’t drop the idea until much later, at the end of the meeting.

The Senate report also discusses the coordination behind officials’ threat, including an email in which a top DOJ official told others within the department that Trump gave Rosen ‘direct instructions to utilize the Department of Justice’s law enforcement powers for improper ends.’

After the January 3 meeting the same official emailed DOJ leadership, ‘I only have limited visibility into this, but it sounds like Rosen and the cause of justice won.’

Senate Judiciary Democrats reveal that the meeting was arranged because Clark had told Rosen that day that Trump was firing him and appointing Clark to lead the DOJ instead.

Clark reportedly asked Rosen to stay on as his deputy, replacing Donoghue.

‘Toward the end of their meeting, Rosen told Clark that he would not accept being fired by his subordinate—and would contact the President to discuss the matter directly,’ the report states. 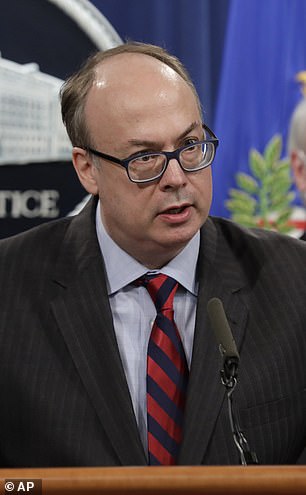 The report also documents multiple conversations between Trump, Rosen and Donoghue in which the president tried to convince them of possible election fraud, culminating in the January 3 meeting.

Trump met with the two men on December 15 to discuss a report on discredited claims of ‘voter fraud’ in Michigan. Attorney General Bill Barr, who would be in office for 10 more days before stepping down, was excluded.

Rosen said Trump asked him why the DOJ wasn’t ‘doing more to look at this’ and if the DOJ was ‘going to do its job.’ Rosen assured Trump the department was doing its job.

The ex-president called Rosen on two occasions the next week, On December 24 and 24.

Trump asked the former Barr deputy if he had looked into election fraud ‘people are saying’ was taking place and added that Rosen should ‘make sure the Department is really looking into these things that you may have missed.’

During the December 24 call Trump also asked Rosen if he knew ‘a guy named Jeffrey Clark.’

Clark had been confirmed by the Senate to serve as the Assistant Attorney General for the DOJ’s Environment and Natural Resources Division where the report notes he ‘developed a reputation for pushing aggressive conservative legal principles.’

He was promoted to Acting Assistant AG for the Civil Division less than two months before the election.

Rosen told the Senate he had asked Clark on December 26 why Trump would have mentioned his name in conversation.

According to the report Clark told a ‘flabbergasted’ Rosen that he had met with Trump in the Oval Office without his knowledge just days earlier. Rep. Scott Perry (R-PA) had recruited Clark for the meeting and later disclosed it was about election fraud claims. 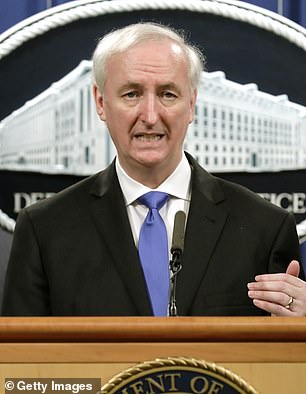 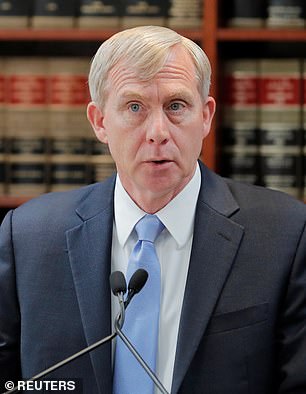 After the alleged meeting Clark sent his letter for Georgia officials to Rosen and his number two, Richard Donoghue. He also suggested the letter be sent to other states where the vote count was being contested.

Rosen revealed that he authorized the briefing hoping that it would show Clark his theories were baseless.

Clark had assured Rosen he wouldn’t speak to Trump again, later revealing that he broke that promise when he discussed the possibility of taking over Rosen’s job with Trump.

On December 27 Trump told Donoghue and Clark over the phone that the ‘election had been stolen out from under the American people.’ 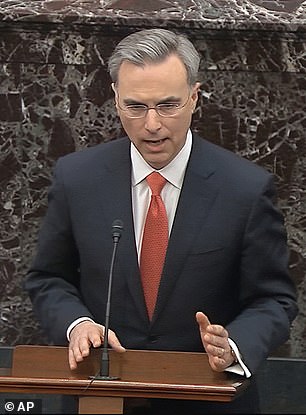 He told Donoghue he’d find ‘tens of thousands’ of illegal votes if he conducted a review of ballots in Fulton County, Georgia.

‘You guys aren’t following the Internet the way I do,’ Trump reportedly told Rosen and Donoghue.

Rosen and Donoghue said they told Trump the DOJ ‘can’t and won’t just flip a switch and change the election.’

Trump told them the DOJ should ‘just say the election was corrupt and leave the rest to me and the [Republican] Congressmen,’ Donoghue recalled.

Donoghue said Trump also brought up Clark again, and told the two officials that he’d been hearing ‘good things’ about Clark and that Trump should ‘put him in’ DOJ leadership.

The deputy said he was surprised because Clark ‘didn’t have anything to do with the Department’s election responsibilities.’

After the call Trump gave Donoghue’s phone number to Perry, who subsequently called him with claims of voter fraud in Pennsylvania. Donoghue turned those claims over to a Pennsylvania district attorney who said they were not well-founded.

A December 31 meeting allegedly featured an ‘unhappy’ Trump over the DOJ’s lack of an election fraud investigation. Chief of Staff Mark Meadows was in attendance as well.

Donoghue described the meeting as ‘contentious’ and said Trump’s ‘frustration was increasing.’ 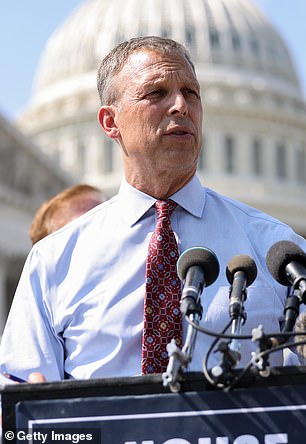 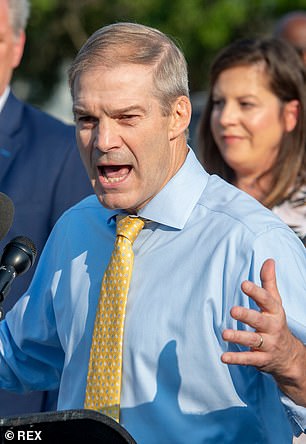 Congressmen Scott Perry and Jim Jordan were mentioned by Trump by name according to the report, when he asked Rosen and Donoghue to work with the Republican lawmakers on election fraud claims

Trump also raised the possibility of taking his election fight to the Supreme Court, insisting he was told it would be a ‘slam dunk.’

Senate Democrats’ report found that Meadows jumped into the pressure campaign against the DOJ himself.

In late December he asked Rosen to investigate alleged voter fraud in Georgia.

Meadows also emailed Rosen a video that detailed a conspiracy theory known as ‘Italygate’ which claims an Italian aerospace company worked with the CIA to change votes from Trump to Joe Biden using military satellites.

Rosen forwarded the link to Donoghue, who called it ‘pure insanity.’

Meadows also allegedly asked Rosen to meet with Rudy Giuliani multiple times, including after the Italygate video, all of which Rosen refused.

Rosen recalled telling Meadows that the contents of the video were ‘debunked’ but Meadows told him ‘there’s more to it.’

To date the Justice Department has not found any evidence of widespread voter fraud in the 2020 election, though Trump and his supporters continue to insist the race was stolen.