Indian Prime Minister Narendra Modi issued an enthusiastic endorsement of Donald Trump on Sunday, and lauded their ‘chemistry,’ as he seeks more support from Indian-American voters.

During one of Trump’s largest rallies to date, which was dubbed ‘Howdy, Modi!’ and included about 50,000 attendees, the Indian leader made his support of the incumbent president very clear, giving kudos on a strong economy, good foreign relation initiatives and the president’s celebration of Diwali in the White House.

Modi said Trump has always been friendly, warm and accessible – words with which not many other world leaders have used to describe this president.

‘I admire him for something more: his sense of liberty, his passion for America, a belief in American future and a strong resolve to make American great again,’ Modi celebrated, invoking the president’s 2016 campaign slogan. 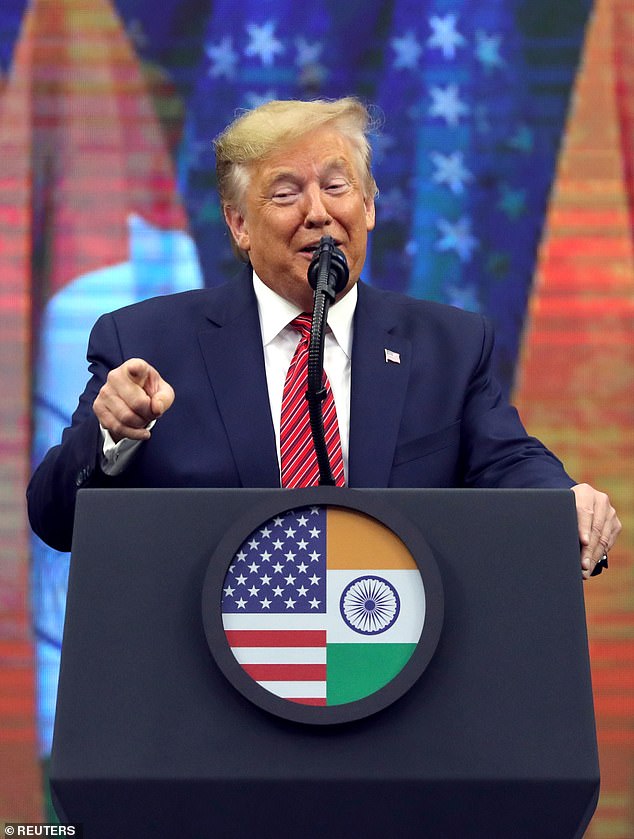 Trump reciprocated the praise, and even floated an unscheduled visit to Mumbai where the first ever NBC game in India will be played

Throughout the rally-like event, attendees waved Indian and American flags and clapped heartily for the U.S. president, who stood grinning to Modi’s left throughout.

Trump reciprocated Modi’s praise, saying India has ‘never had a better friend’ than him.

‘Under PM Modi’s leadership, the world is witnessing a strong, sovereign republic of India,’ he told those gathered at the NRG Stadium Sunday afternoon.

During Trump’s remarks, he alluded to India’s concerns over terrorist threats from a Pakistan-based organization in Kashmir, a region that has been the subject of dispute between between India, Pakistan and China for decades.

‘Both India and U.S. also understand that to keep our communities safe, we must protect our borders,’ Trump, whose key campaign promise was to build a wall along the southern border, said to the crowd of mostly Indian-Americans.

‘Today we honor all of the brave Indian and American military service members who work together to safeguard our freedom,’ the president continued. ‘We stand proudly in defense of liberty, and we are committed to protecting innocent civilians from radical Islamic terrorism.’

In a dramatic turn, Modi’s government stripped the state of Jammu and Kashmir of its partial autonomy in August and imposed restrictions that essentially shut it off from the outside world. 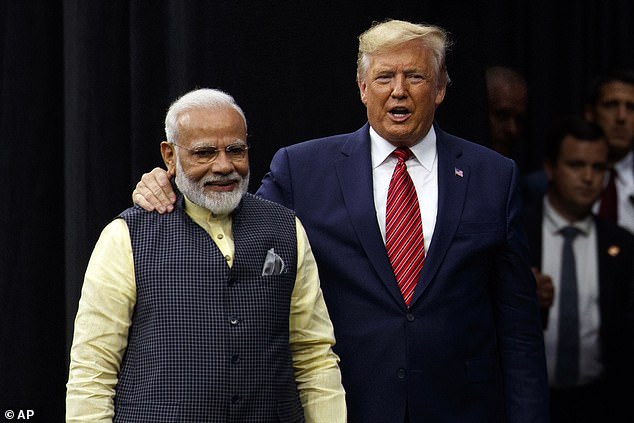 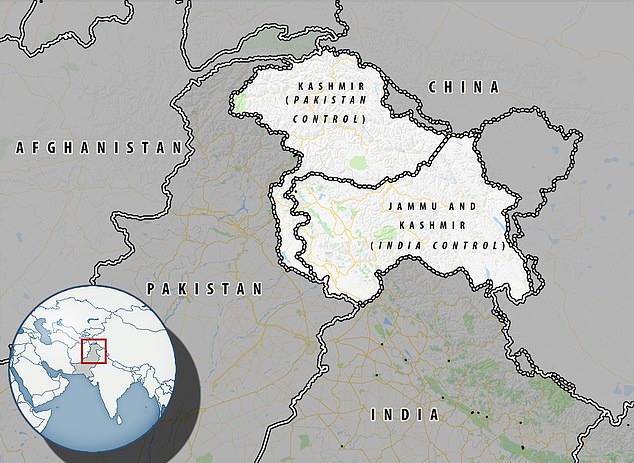 Kashmir has been disputed between Pakistan, India and China for decades, and in August Modi essentially cut off the region from the rest of the world as it reined in its partial-autonomy 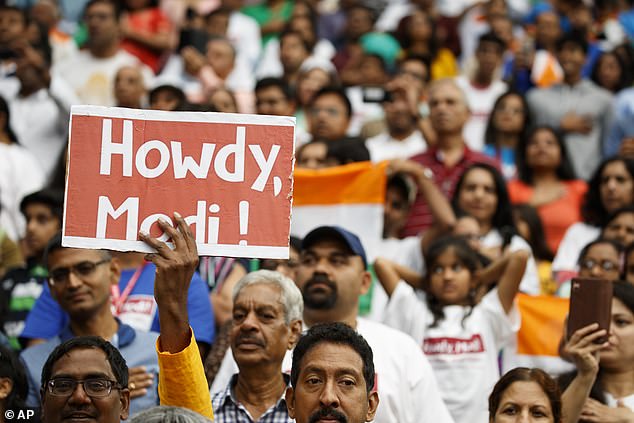 During the event, ‘Howdy, Modi!’, attendees cheered both the president and prime minister and waved Indian and American flags

Along with the president’s praise of Modi, he also floated making an unscheduled trip to Mumbai to attend the first ever NBA game to take place in India.

‘And very soon India will have access to another world class American product: NBA basketball. Wow. Sounds good. That sounds good. Next week, thousands of people will gather in Mumbai to watch the first ever NBA basketball game in India. Am I invited Mr. Prime Minister?’ he queried of Modi, who gave him a smile and nod.

The Sacramento Kings and Indiana Pacers will play two preseason games on October 4 and 5 at the Dome, NSCI, SVP Stadium in Mumbai.

‘We welcome India’s growing investments right here in the lone star state. Nations around the world are investing in the United States because they know we have the best economy and best workers in world,’ Trump lauded. ‘We want to thank everybody and India has never invested in the US like it is doing today, and I want to say it’s reciprocal because we’re doing the same thing in India.’

Modi lavished praise on the U.S. leader who’s up for reelecton next year, but did not outright mentioned the elections while speaking in a red state that is slowly turning purple.

Trump won Texas with 52.2 per cent of the vote in 2016, losing out in the bigger cities and along the border. Asian Americans, with Indian Americans as a subset of that group, is the largest growing voter groups in the U.S., nearly doubling in the last decade – and Trump is looking to improve his standing with them next year.

A study shows that people of Indian origin in the U.S. are among the strongest supporters of the Democratic Party.

When asked, ahead of the 2016 election, who they planned to vote for, 60 per cent of Indian-Americans said they viewed the GOP unfavorably.