Trump reverses threat to shut down US government

President Donald Trump abandoned a threat to shut down the US government Friday, signing off on a budget despite being “unhappy” with many of its provisions — and warning he won’t back anything similar ever again.

He later tweeted his desire to have a “line-item veto” over future bills that would allow him to remove parts he disagrees with — a measure that would alter the balance of the government and was ruled unconstitutional by the Supreme Court in 1998.

A visibly aggrieved Trump capped another anarchic week by approving the $1.3 trillion deal passed by the Republican-controlled Congress, just hours after threatening to veto it.

He fumed that a “crazy” lawmaking process had produced a bill that “nobody read” — but said he was signing it as a “matter of national security.”

“There are a lot of things that I’m unhappy about in this bill,” he said in a hastily arranged and meandering address.

“There are a lot of things that we shouldn’t have had in this bill. But we were, in a sense, forced,” he said. “But I say to Congress, I will never sign another bill like this again. I’m not going to do it again.”

He later riffed on the same theme on Twitter, where he said: “To prevent this omnibus situation from ever happening again, I’m calling on Congress to give me a line-item veto for all govt spending bills!”

Congress passed a short-lived Line Item Veto Act in 1996, giving then president Bill Clinton the power to scratch items from spending bills as a means to rein in fiscal excesses.

The law was challenged and later struck down by the Supreme Court in a 6-3 ruling which found it unconstitutional because it enabled the president to amend the text of statutes, the task of the legislative branch.

Presidents retained the power of veto over bills but without the ability to pick and choose which elements to retain and which to cut.

Without his signature, hundreds of thousands of civil servants would have been put on forced leave, national parks from the Grand Canyon to Yellowstone would have faced closure and non-essential services would have stopped.

It would have been the third shutdown of 2018, something lawmakers from both parties had worked hard to avoid.

Trump’s threat came after a host on conservative channel Fox News pilloried the deal as a Washington “swamp budget.”

The last-minute drama only fueled a sense of chaos emanating from a White House that seems to lurch from crisis to crisis.

At the same time, he faced an unprecedented number of scandals — from a defamation lawsuit to allegations of at least two extramarital affairs.

Amid the pressure, Trump has become unbridled, appearing increasingly willing to disregard the advice of aides and trust his own instincts, regardless of the repercussions.

“Let’s cut right to the chase. Is the president going to sign the bill? The answer is yes. Why? Because it funds his priorities.”

– Border security and the ‘Dreamers’ –

The centerpiece of the legislation is a $61 billion increase in US defense spending and a 10 percent hike in domestic spending, which would rise to $591 billion.

The bill provided $1.6 billion for border security and construction or repair of nearly 100 miles (160 kilometers) of border fencing, but that was far less than Trump had been seeking. 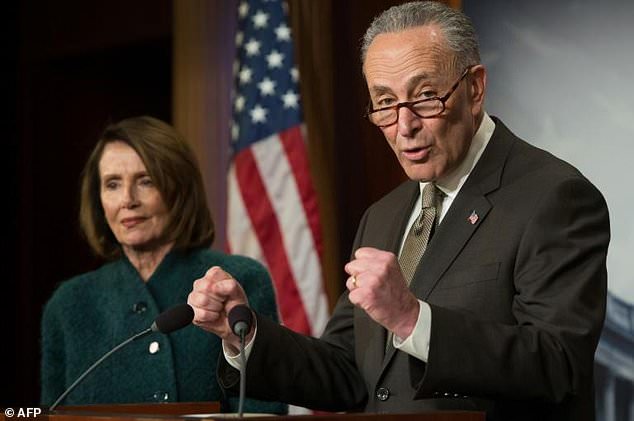 But it set aside the issue of the so-called “Dreamers,” immigrants brought illegally to America as children who were protected under Obama-era regulation.

Trump himself cancelled the de facto amnesty — known as DACA — but has repeatedly tried to pin the blame on Democrats.