‘She had ONE beer yet can’t remember where she was, when it happened or anything’: Trump rips into Kavanaugh accuser Christine Ford – and the ‘evil’ people trying to destroy him

President Donald Trump has blasted Christine Blasey Ford for the holes in her accusation against Supreme Court nominee Brett Kavanaugh, and defended his pick for the high court.

Trump was speaking at the ‘Make America Great Again’ rally in support of Mississippi’s two incumbent US senators, Cindy Hyde-Smith and Roger Wicker, both Republicans.

Due to a special election to fill the seat that Hyde-Smith was appointed to earlier this year, both Senate seats in Mississippi are up for re-election in the November 6 midterm election.

US President Donald Trump speaks during a MAGA rally at Landers Center in Southaven, Mississippi on Tuesday

Prior to the rally, numerous groups of Trump supporters gathered along the motorcade route from the airport to the Landers Center.

The crowd in the arena, which holds 8,400, warmed up with a prayer and the singing of the National Anthem. 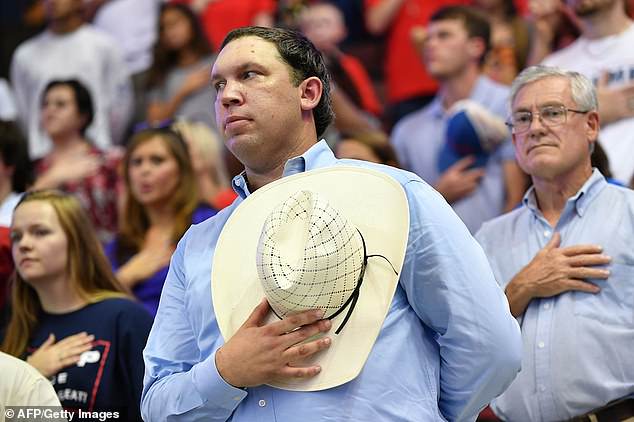