The president also pointed to the economic model available in Vietnam – where the communist government has maintained political control but opened up economically and established vigorous trade relations with the U.S.

Kim visited a factory in Hanoi on Tuesday, getting a first hand look at some of the economic progress being made, in a nation that has regularly surpassed 6 per cent growth and achieved per-capita income several fold greater than in North Korea.

‘Vietnam is thriving like few places on earth. North Korea would be the same, and very quickly, if it would denuclearize,’ Trump wrote, once again introducing a carrot of sorts on the day he is set to dine with Kim along with two top aides to each leader.

‘The potential is AWESOME, a great opportunity, like almost none other in history, for my friend Kim Jong Un,’ Trump added. ‘We will know fairly soon – Very Interesting!’

Trump also took a shot at his critics, including skeptics who fear he will make major concessions to the North Koreans like declaring a formal end to the Korean War or even discussing eventual U.S. troop withdrawals without getting concrete steps in return

‘The Democrats should stop talking about what I should do with North Korea and ask themselves instead why they didn’t do “it” during eight years of the Obama Administration?’ Trump wrote in a follow-up tweet.

Trump fired off the tweets after landing in Hanoi Tuesday evening after a flight halfway around the world.

Per capita income in Vietnam is nearly double that in North Korea, $2,400 compared to $1,300, achieving 7 per cent growth and with robust foreign investment and growing trade with the U.S.

South Korea is much farther along the development path, with per capita income of $26,000. 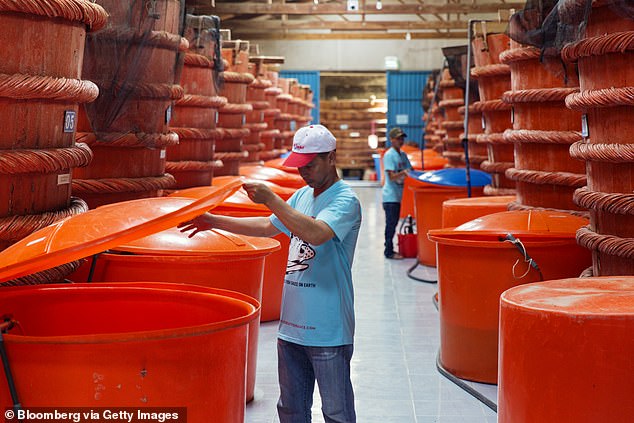 A Red Boat Fish Sauce employee looks inside a container at the company’s factory in Phu Quoc, Vietnam, on Friday, Nov. 2, 2018. Gourmands are making pilgrimages to Red Boat’s riverside operations on Phu Quoc Island off the southwest coast of Vietnam, right on the border with Cambodia. Vietnam has developed robust trade relations with the U.S. 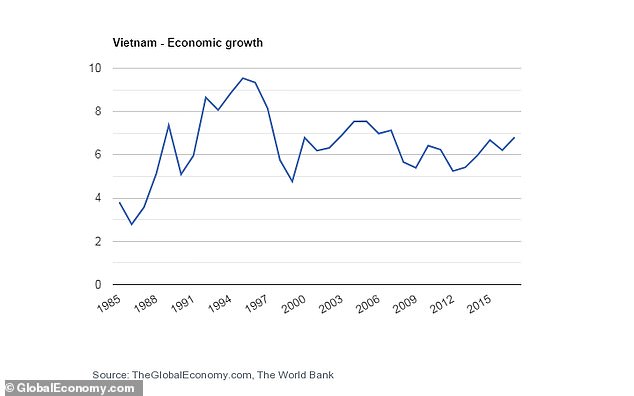 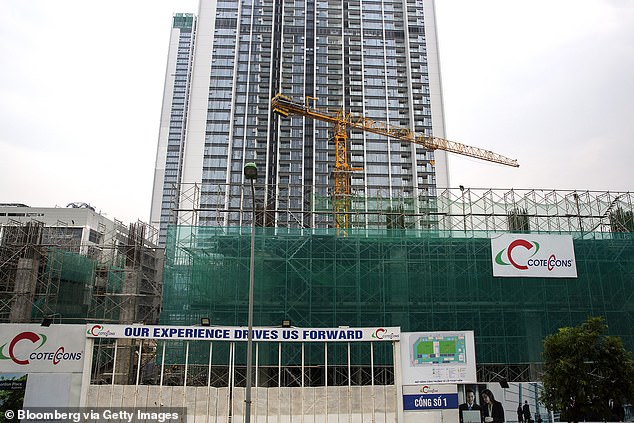 A crane stands at a construction site of the Vinhomes Metropolis Lieu Giai building, developed by Vingroup JSC, in Hanoi, Vietnam, on Tuesday, Sept. 11, 2018. The nation of 96 million people has embraced free-market reforms over the past few decades, leading to surging growth under an authoritarian one-party Communist government that offers the same political stability as China 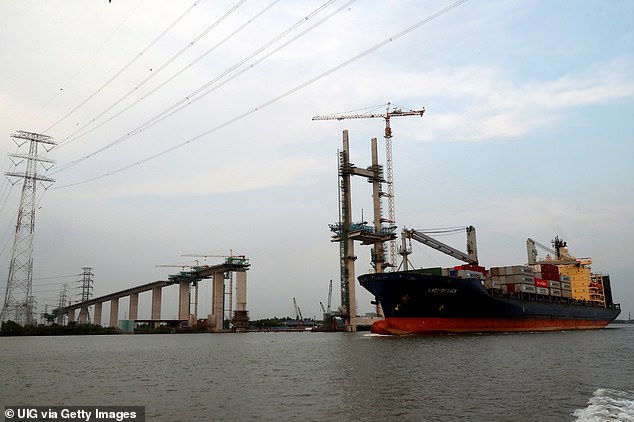 LETS BUILD A BRIDGE: A Container ship at Saigon river in Vietnam. The U.S. is Vietnam’s top export market 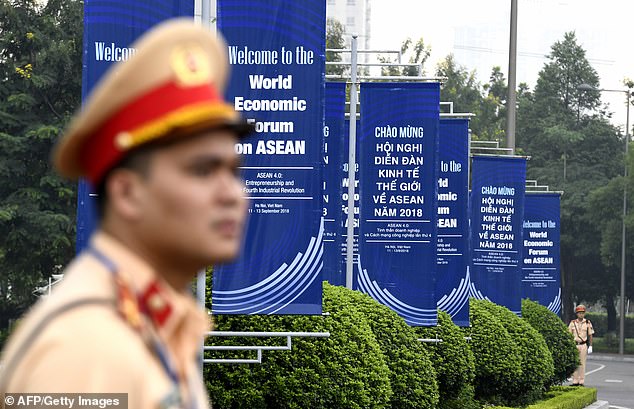 Vietnam police personnel guard the compound of the National Convention Center in Hanoi, the venue of the World Economic Forum on ASEAN on September 11, 2018 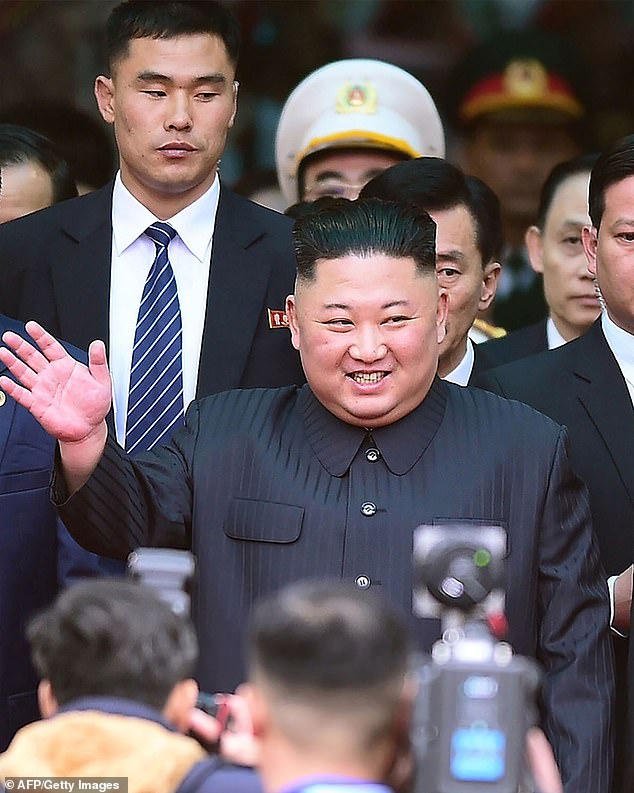 The president is relying on his brand of personal diplomacy to try to score a breakthrough here with Kim.

He has previously said they fell ‘in love’ at their Singapore summit, and has repeatedly stressed that the hermetic regime could become wildly successful if it modernizes and relinquishes its nuclear weapons.

His bid to establish camaraderie with Kim comes despite dark signals that continue to emerge out of the closed society he governs.

Kim forced his uncle to watch colleagues get blown apart with anti-aircraft guns before his own death, according to a defector.

Kang Cheol-Hwan said he was told by eye witnesses that two men who worked with Kim’s uncle, Jang Song-thaek, were killed by firing squad.

The two men were brought in front of a barrage of eight anti-aircraft guns and had lumps of iron stuffed into their mouths.

Trump landed in Hanoi Tuesday evening local time for his second summit meeting with Kim Jong in a bid to try to persuade the leader of the hermetic regime to relinquish nuclear weapons. 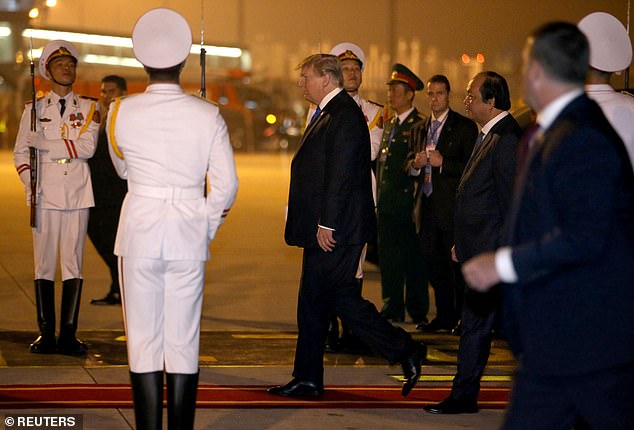 SPURRED TO ACTION: President Trump walks by a Vietnamese soldier as he arrives for summit talks with North Korean dictator Kim Jong Un 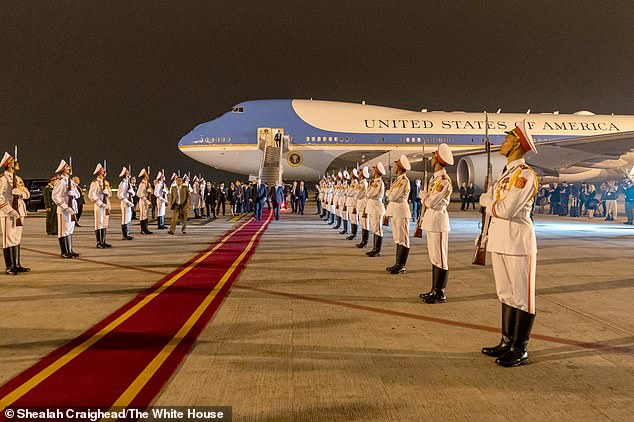 Formal welcome: Vietnamese soldiers in dress uniform were lined up to welcome Trump to Hanoi after Air Force One taxied

On Wednesday evening, President Trump is set to hold his first meetings with Kim since their June summit in Singapore.

They are scheduled to have a brief one-on-one greeting, followed by a ‘social dinner,’ where Trump will be joined by Secretary of State Mike Pompeo and his acting chief of staff, Mick Mulvaney. Kim is expected to be accompanied by Kim Yung Chol, the general and senior leader who delivered a letter to Trump from Kim, as well as by another associate.

Kim meanwhile, has extended his trip through Saturday, according to state-run North Korean media. He will tack on a ‘official goodwill visit’ in the country after the summit. A top aide known as Kim’s butler scouted out locations about a week ago, including the picturesque Halong Bay where Kim’s grandfather Kim Il-sung visited in 1964.